"I think he should have been let go before the [end of the] transfer window. I think the manager is holding on to him.

"Okay, you say you need options, but you don’t hold on to Ronaldo to sit on the bench. He’s one of the greatest players ever.’"

Keane, a long-time champion of his former team-mate, has engaged in several high-profile rows about him already this season, and he's right about one thing: Ronaldo should have been sold in the summer transfer window.

The 37-year-old attempted to jump ship after the worst Premier League season in United’s history, and there was little sense in forcing him to stay.

However, the notion that Ronaldo is being mistreated after being denied an exit and immediately losing favour with Ten Hag does not ring true.

The five-time Ballon d’Or winner hit 24 goals across all competitions in his first season back at Old Trafford, but in order for him to thrive, the Red Devils had to take a huge step back as a collective – which cost Ole Gunnar Solskjaer his job and Ralf Rangnick the highly paid consultant position he was promised following his interim tenure.

An effective counter-attacking style was ditched to accommodate Ronaldo, who showed his predatory instincts remain as sharp as ever, but also demanded impossibly high standards from his team-mates.

He made sure to vent his fury over any stray passes or poor touches, and was the first man down the tunnel after United’s many losses, with supporters also getting the cold shoulder. 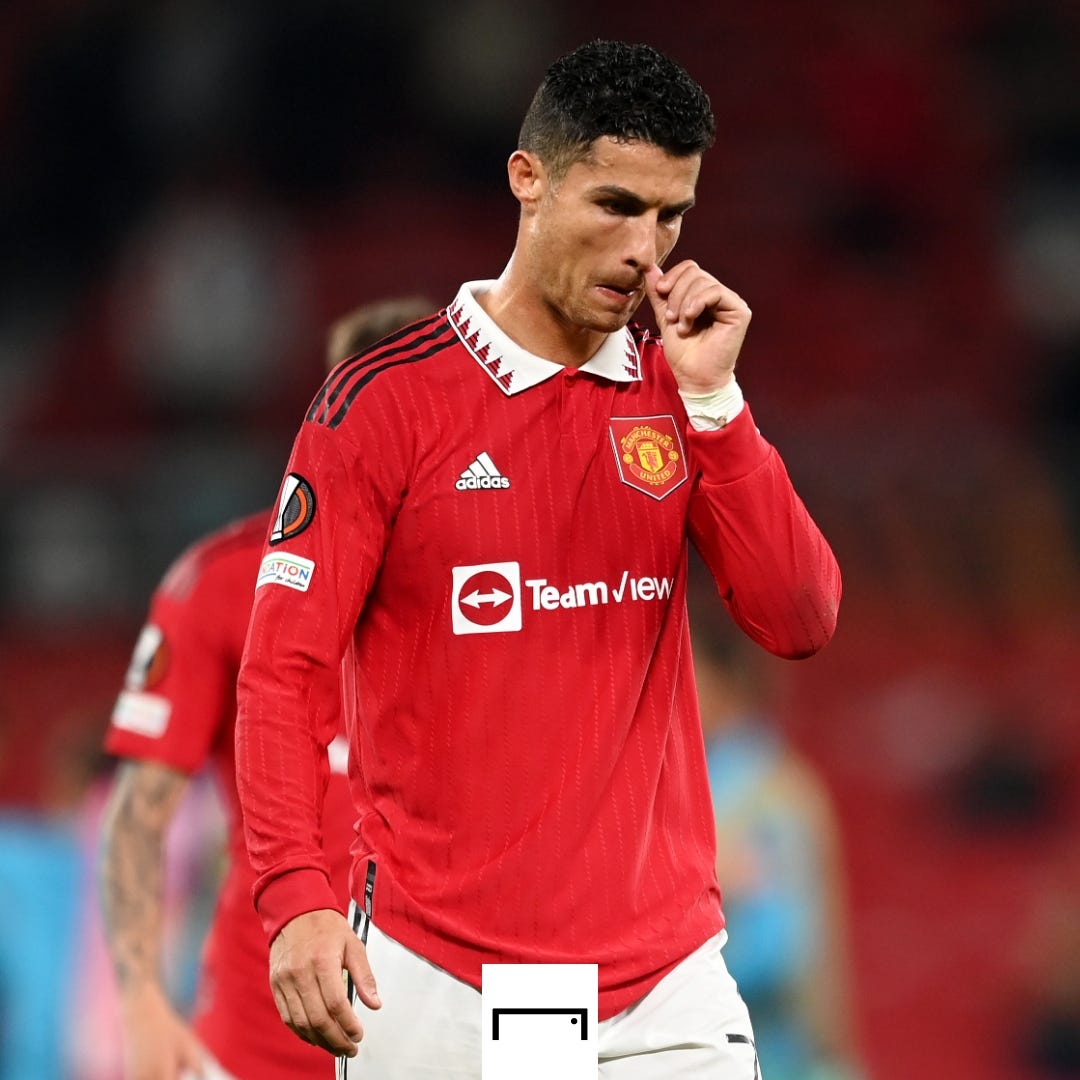 Respect is a two-way street and he has disrespected the fans, his team-mates, and his head coach on one too many occasions.

On his only Premier League start under Ten Hag to date at Brentford, which ended in a stunning 4-0 loss, Ronaldo went into sulk-mode once again and even appeared to ignore his manager when leaving the field.

The Portugal international has been restricted to a bit-part role in the squad since then, but he is still making headlines on a regular basis.

Ronaldo was seen shaking his head throughout United’s derby-day nightmare at the Etihad Stadium, and there is nothing wrong with that.

He is a serial winner, one of the most decorated players of his generation who plunges himself into ice baths at 4am to gain an advantage over opponents.

Throughout his career, he has made his displeasure known in public and, more importantly, behind the scenes.

Another of his former colleagues, Rio Ferdinand, recently admitted: "I know for a fact that he will be absolutely fuming right now.

"You don’t get to do what he’s done in his career over this amazing amount of time at the levels he’s been playing and be someone who’s going to accept not starting and being a sub for a team that’s not in the Champions League.

"No matter what anyone says about running, pressing etc, he’ll know the stats, he’ll be saying ‘I got this team more points than anyone else last year with the goals I scored.'" 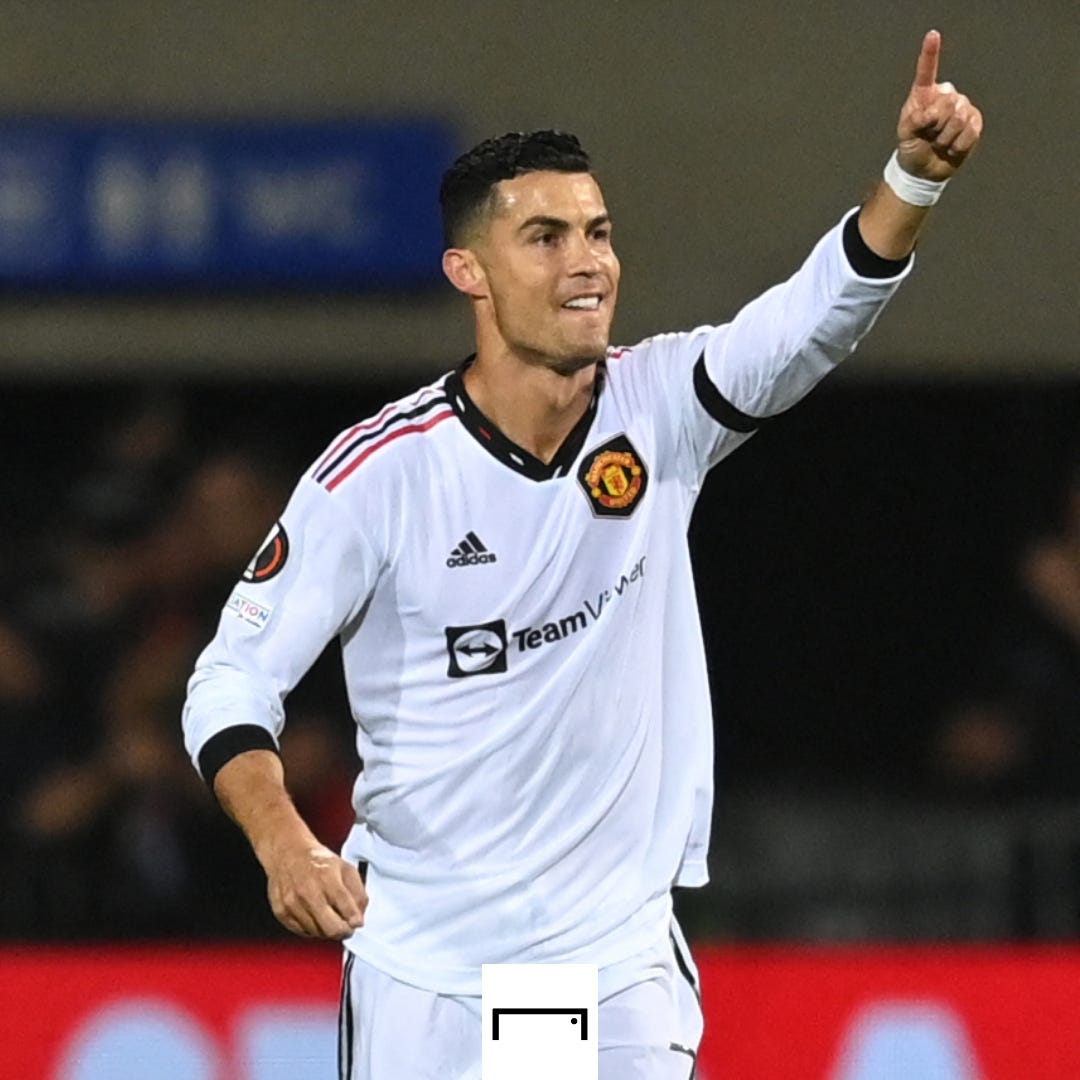 Ten Hag’s latest explanation for dropping Ronaldo also only served to stir up more questions, as he insisted that he was trying to protect the striker’s ‘"big career"’ by not throwing him into the firing line against City.

Frustratingly, this saga will now drag on at least until the January transfer window, at which point Ronaldo may still struggle to seal an exit.

Chelsea, Bayern Munich and Atletico Madrid were among the clubs that distanced themselves from a move for the ageing marksman in the summer, and it remains unclear whether he will be able to find a Champions League outfit willing to take him and his lucrative wages on.

United may, therefore, have no choice but to keep hold of Ronaldo until the end of the season.

Can Ten Hag’s revolution really take off while the club’s disillusioned poster boy continues to lurk in the background? The omens don’t look good.

The manner of the loss to City comes as a harsh reality check after an encouraging four-match winning run, with murmurs of a potential title challenge now quashed.

United looked rusty at the Etihad, having seen their momentum stalled by postponements and the international break, and much of the pre-match talk focused on whether Ronaldo should be drafted back into Ten Hag’s line-up.

That noise will continue for as long as the Portugal captain is still on the books. He wasn’t directly responsible for the team’s abject display against their noisy neighbours, but he was a distraction.

Ronaldo is one of the game’s all-time greats and, even as he approaches the twilight years of his career, prompts debate from Manchester to Mumbai.

As Keane also pointed out at the weekend, the situation is only going to get ‘’uglier’’ for United if a club legend stays among the substitutes. 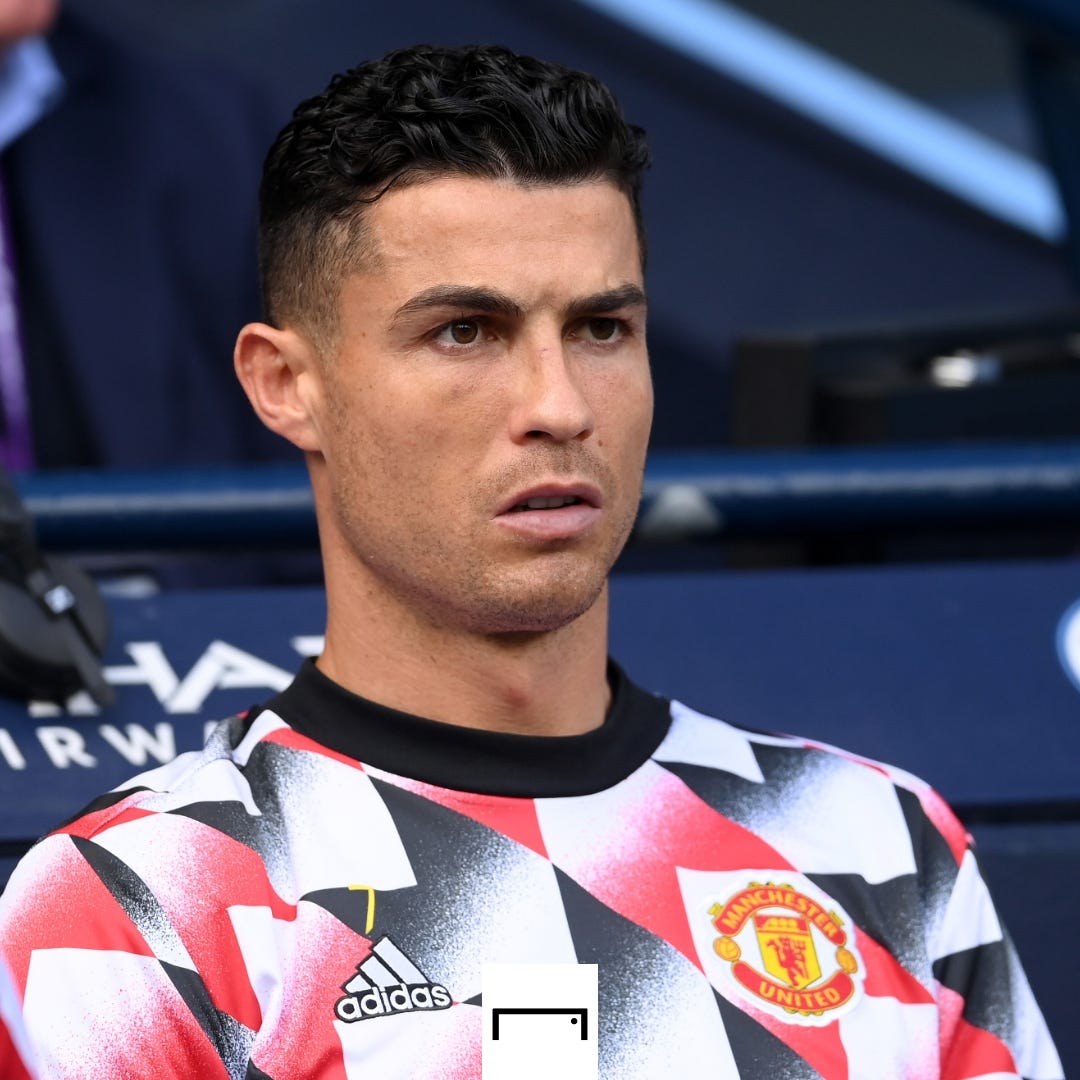 Regular Europa League run-outs won’t be enough to pacify a striker that is used to testing himself on the biggest stage week in, week out.

A drastic decision needs to be made.

Amid the swirling speculation over Ronaldo’s future in the last window, it was reported that the club were considering terminating his contract.

United came out to publicly deny those claims, but for the sake of maintaining harmony within Ten Hag’s squad, it should now be seen as a viable option.

If they acted now, Ronaldo could secure a new club with plenty of time still remaining before the World Cup, ensuring that he is still in top condition to help his country reach the latter stages in Qatar.

The club would also be free to build their new identity without having to worry about keeping a past-his-peak superstar happy. Ten Hag could certainly use that breathing space.

The former Ajax tactician was handed a three-year contract upon his arrival at Old Trafford in May, but he will be well aware that there are no guarantees when occupying one of the most scrutinised posts in the business.

If United extend their five-year trophy drought and fail to get back into the Champions League, Ten Hag will likely share the same fate as David Moyes, Louis van Gaal, Jose Mourinho and Solskjaer.

His reign could be defined by how he handles the Ronaldo issue, and although he has already made his authority clear, he must now stick to his guns. 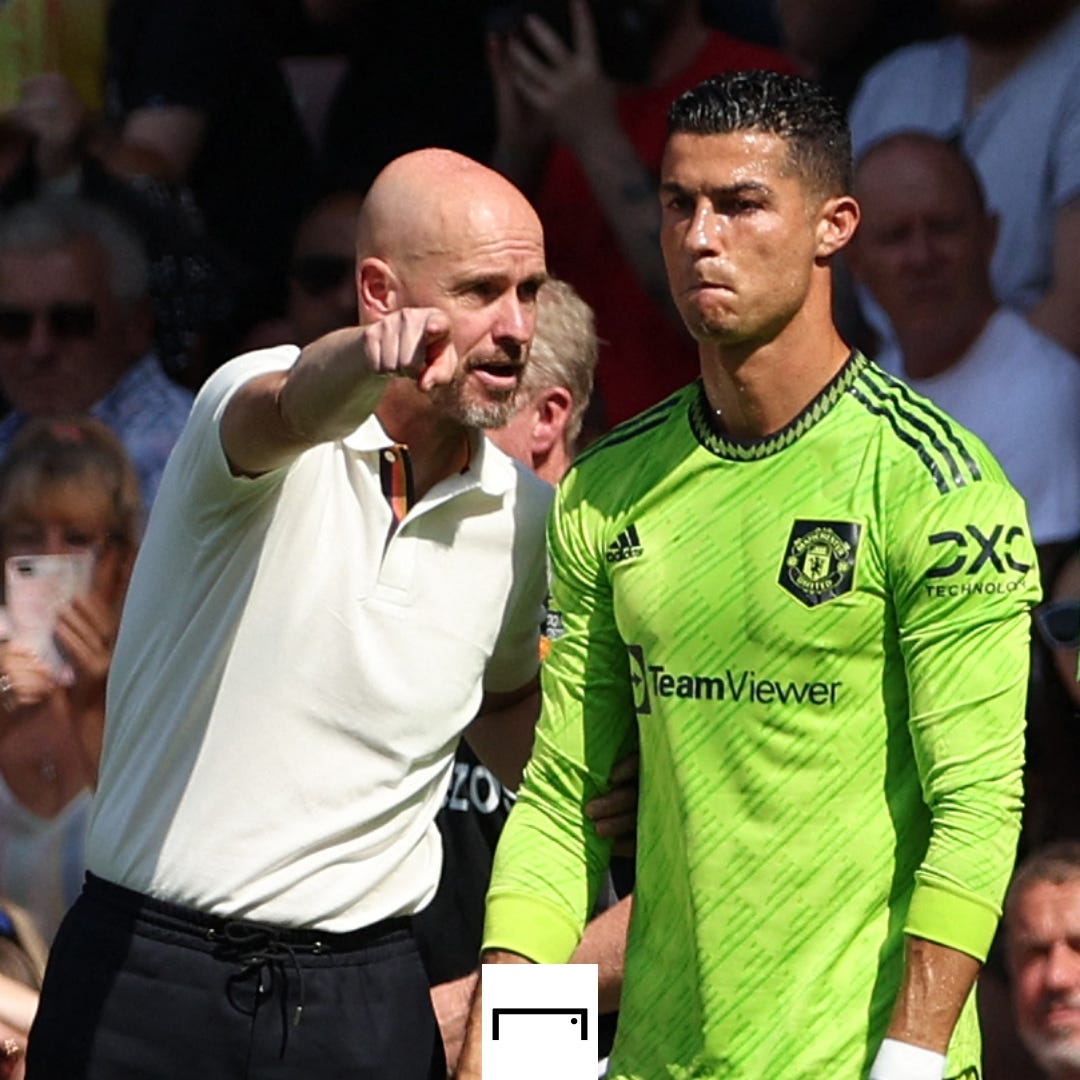 Ten Hag can advise the powers that be to usher the frontman out of the exits or simply continue to let a disruptive, mutinous figure decay on the sidelines, but he cannot afford to be caught in two minds.

It would also be refreshing if Ronaldo acknowledged that his powers are finally on the wane and stepped out of the limelight.

A potential return to Sporting would make the most sense, as he would still have the opportunity to play Champions League football.

Sporting director Hugo Viana left the door open for Ronaldo’s homecoming in June, telling Sky Sports: "I think he can decide where he can go, but we never know the future. I don’t want to talk a lot about that because I think when we talk about Cristiano it is quite different.

"I think he has one year more contract so whatever he decides, let’s see."

Ronaldo’s mother, Dolores Aveiro, has also expressed her wish for her son to see out his playing days at the Jose Alvalade Stadium.

"I've already told him: 'Son, before I die I want to see you return to Sporting!'" she said in September 2021.

United backed Ten Hag with a £220 million ($250m) war chest in the summer market, and they must be right behind him again with regards to Ronaldo, who should not be appeased purely based on his history with the club.

United are looking to the future, and although Ronaldo is their last reminder of a glorious past, he should not be a part of their new era.