This Monday marks the 30th anniversary of the Hillsborough tragedy that took place in 1989, which left 96 Liverpool fans dead and hundreds of others injured and traumatised.

'Justice for the 96' was finally served during a 2016 inquest that ruled that Liverpool fans were in no way responsible for the crush, despite years of the South Yorkshire police and The Sun perpetuating lies that they were to blame for the tragedy.

Thirty years on from the disaster, Goal takes a look at what happened on the day, what events led to the crush, and why it was so important for justice to be served for the 96.

What happened in the Hillsborough disaster?

The Hillsborough tragedy took place on April 15, 1989 during an FA Cup semi-final match between Liverpool and Nottingham Forest and is the worst stadium-related disaster in British sport history.

A human crush due to overcrowding occurred in the two standing-only central pens in the Leppings Lane stand, allocated to Liverpool supporters, killed 96 fans and injured 766.

Prior to the start of the game, there was a heavy influx of match-goers. In an effort to ease the overcrowding that was leading to the entrance turnstiles to become blocked, the police – led by match commander David Duckenfield - ordered one of the exit gates to be opened, leading to a disastrous flooding in of even more supporters that eventually led to a crush.

Following the disaster, police and British tabloid The Sun had blamed the Liverpool supporters for being responsible for the crush when the real problems had to deal with insufficient organisation and fatal decisions made by the South Yorkshire police.

It was only 28 years after the tragedy, however, that an inquest ruled that the victims had been unlawfully killed and ruled accidental, and that the blame was ultimately left on the shoulders of the police and ambulance services.

What events led to the Hillsborough disaster?

What could have been a fine spring afternoon for a game of football turned into a day of heartache and devastation as 96 Liverpool fans were crushed to their deaths.

The fact that the disaster was caused by a multitude of errors and mistakes by those in charge of overseeing the match – as well as the subsequent cover-up by the police and the long road to justice – has continued to leave a long-lasting imprint on British football.

The Hillsborough tragedy began when hundreds of Liverpool fans were ushered into the Leppings Lane stand of the stadium allocated to them.

It became quite clear from early on that overcrowding was to become a problem with the high volume of supporters streaming in through the entrances. A watching police officer had radioed into the control room to ask that the game be delayed to ensure that the supporters entered the ground safely – but his request was declined.

Fans continued streaming into Hillsborough in large numbers into the already populated pens, with police not intervening to stem the flow. As more people entered the stands, they were forcibly squeezed up against those already in front, who were already pressed up against the perimeters of the stands – taking up all available space.

People then started to be crushed to death, and those in the surrounding areas attempted to desperately escape the crowd by climbing out of the pens and onto the pitch.

When Liverpool's Peter Beardsley struck the framework of the goal, the crowd in the Leppings Lane stand surged forward – leading the fans situated at the front of the stand to collide into the front fences. 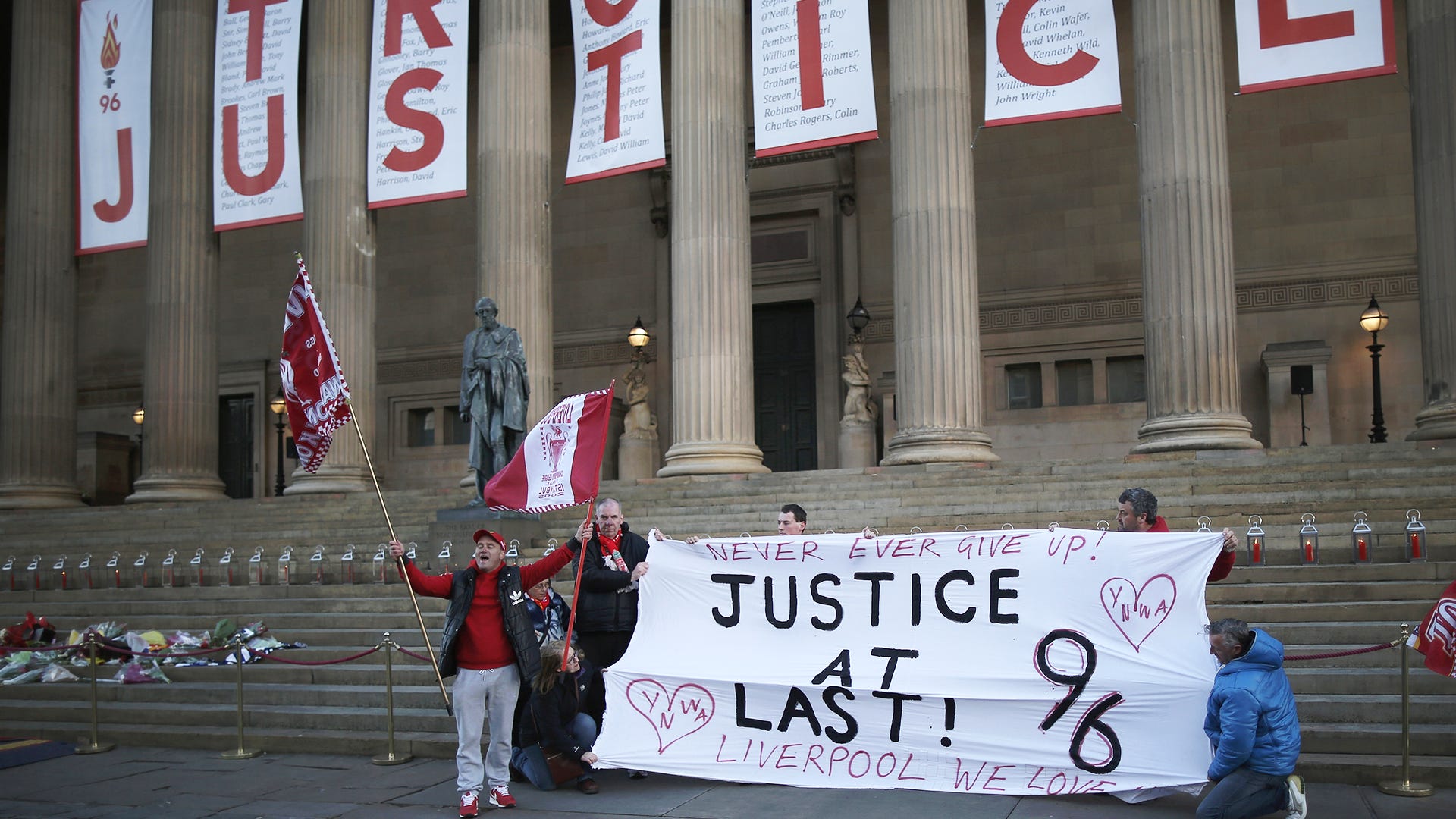 It was five minutes past 3pm when the referee blew the whistle to pause the game after witnessing several fans climbing the fence and onto the pitch to escape the crush. Some fans were lucky to break free, though others were already victims of asphyxiation, struggling for air.

The inquest to the disaster later heard that the fans trapped in the pens were squeezed so tightly that they died from compressive asphyxia while standing.

Police officers, match stewards and ambulance services were unable to control the situation while fans who escaped the stands attempted to rescue those on the border, still being crushed.

Realising that something was going very wrong, Roger Greenwood, the senior police officer in charge inside Hillsborough on the day, ran onto the field to gain referee Ray Lewis's attention and get him to stop the match.

It was 3:05:30 when Mr Lewis blew the whistle and desperate fans were climbing the fence in an effort to escape the crush. Some managed to escape the horrendous mass of bodies by forcing open a small gate, while others struggled for air above them.

Other fans were pulled to safety by those in the West Stand above the Leppings Lane terrace. The intensity of the crush broke more crush barriers on the terraces and amid desperate scenes holes were made in the perimeter fencing by fans trying to rescue others.

Only 14 of the 96 who were fatally injured managed to arrive at the hospital, while South Yorkshire police officers then laid the blame of Liverpool fans having caused the deaths themselves – alleging that they were uncooperative, intoxicated, arriving late and violent.

What does Justice for the 96 mean?

Justice for the 96 - or JFT96 - is a reference to the families of the Hillsborough victims seeking justice for the way that their deaths were treated.

In the aftermath of the disaster, The Sun printed a front-page story claiming that Liverpool fans were responsible for the unfolding of the tragedy – going as far as to accuse them of being drunk, urinating on corpses, and robbing dead bodies. 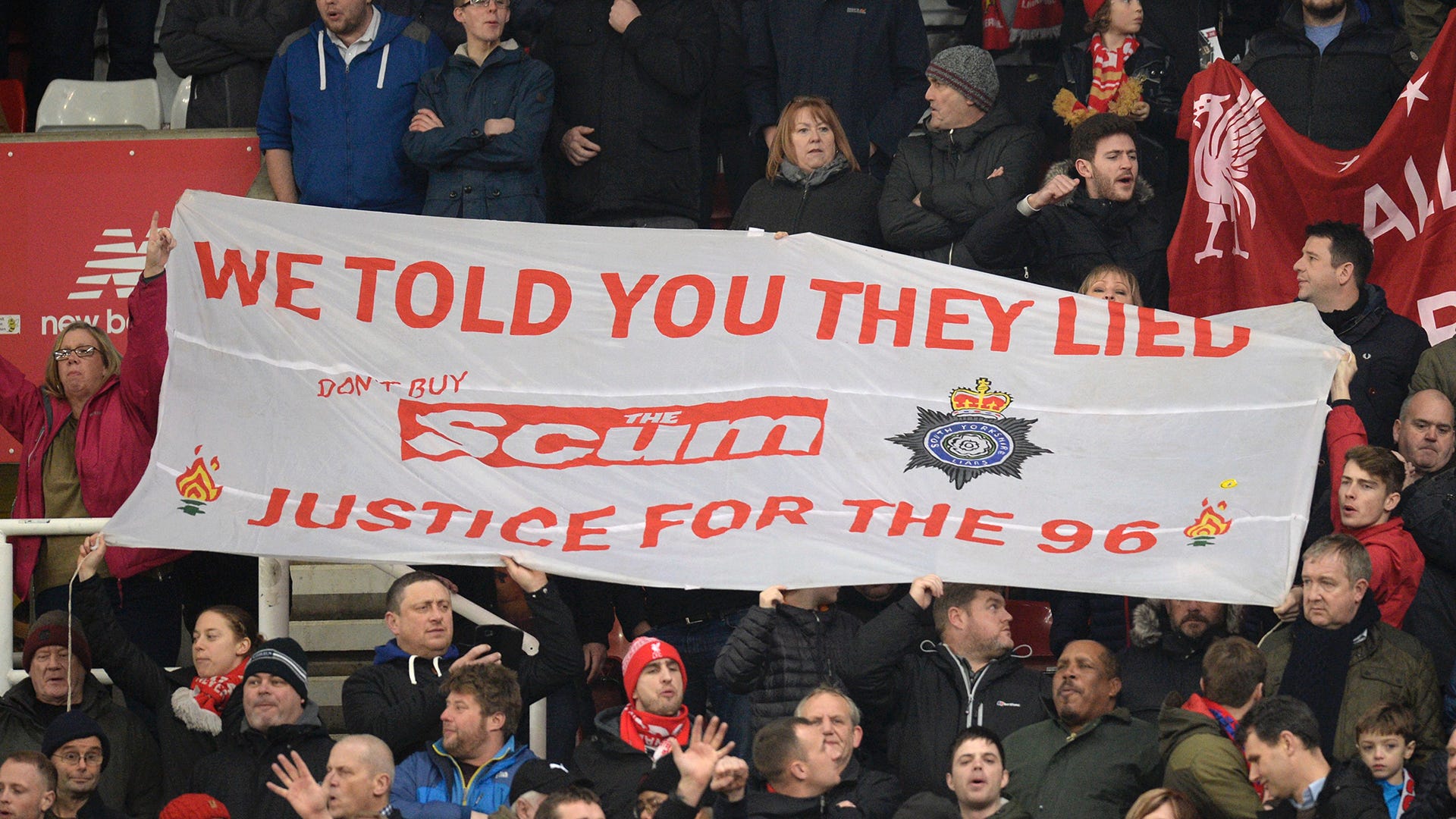 None of this was true as the blame ultimately was at the fault of the disorganisation of the South Yorkshire police, but the lies that the newspaper generated have had a long-lasting, damaging effect on the way people perceive the Hillsborough tragedy.

Friends, families and other fans have campaigned for decades to have the 'truth' about the disaster be revealed and to abolish the lies that were perpetuated from public consciousness.

In the 2016 Hillsbourgh inquest, justice was served as they concluded that a major cover-up had taken place in an effort by the police and surrounding forces after the original 1991 inquest ruled that the deaths were just accidental.

What happened at the 2016 inquest?

In a 2016 inquest into the tragedy, a jury ruled that the Liverpool supporters were unlawfully killed due to negligence and disorganisation by the police and ambulance services to fulfil their duties.

The inquests also stated that the design of the Hillsborough stadium contributed to the overcrowding and eventual crush, and that the fans were not to blame for the conditions.

The 2016 inquest jury rejected the accusation that Liverpool fans were to blame for the deaths, ultimately finding that no behaviour on their part contributed to the crowd control problem on April 15.

The jury said about the role of the South Yorkshire police: "The police delayed calling a major incident so the appropriate emergency response was delayed.

"There was a lack of co-ordination, command and control which delayed or prevented appropriate responses."

On the role of former South Yorkshire Metropolitan Ambulance Service, the jury stated: "Symas officers at the scene failed to ascertain the nature of the problem at Leppings Lane.

"The failure to recognise and call a major incident led to delays in the responses to the emergency."