It’s fair to say that 2021 has been a good year for Tyler Morton.

The Liverpool youngster’s rise was as rapid as it was unexpected. From U23s football in the mud at Southport to Champions League nights in the San Siro, and all in the space of 12 months.

“Pretty impressive,” is how Jurgen Klopp describes the midfielder’s progress. Morton only turned 19 at the end of October, but he already looks at home around the Reds’ first-team squad.

Having made a good impression during the pre-season training camp in Austria, the teenager took his chance in Carabao Cup outings at Norwich and Preston, and has since made four further appearances, including Champions League starts against Porto and AC Milan, as well as Sunday’s full Premier League debut at Tottenham.

Sure, that selection was out of necessity as much as desire.

Liverpool’s midfield options have been decimated by positive Covid-19 tests to Fabinho, Thiago Alcantara and Curtis Jones, while Harvey Elliott is injured and Jordan Henderson has been suffering from a hefty cold.

But Morton was still selected ahead of far more experienced colleagues in north London. Alex Oxlade-Chamberlain and Takumi Minamino, both viable options, remained unused, while Klopp could easily have switched formation to include Roberto Firmino in a four-pronged attack.

He didn’t, though. Instead he trusted the youngster, and while it was something of a baptism of fire, the lessons learned against Harry Kane & Co. will only benefit Morton going forward.

Having played an hour at Spurs, he is likely to feature again in Wednesday’s Carabao Cup quarter-final against Leicester at Anfield, with Liverpool expected to give opportunities to a number of other promising prospects.

Expect to see the likes of Conor Bradley, Owen Beck and exciting winger Kaide Gordon involved, while others such as Billy Koumetio, Jarell Quansah, Harvey Blair and Max Woltman will hope to be included.

Woltman, incidentally, is Morton’s best friend, and it was wonderful to see the pair sharing a pitchside picture after Liverpool’s win in Milan earlier this month.

Woltman had made his professional debut as a late substitute in that game, while Morton played the full 90, battling away against the likes of Zlatan Ibrahimovic, Franck Kessie and Sandro Tonali, and looking more than at home doing so.

It was all a far cry from the days when he and Woltman were spotted playing for renowned Wirral junior team Greenleas as a pair of six-year-olds.

They joined Liverpool together and have been inseparable since. Ask academy coaches and they’ll tell you they are two of the hardest-working players you could wish to find.

Klopp has certainly taken to Morton. “The football brain is outstanding,” he said after October’s win at Preston, though with a smile he followed up that it was time to "send him to the gym".

“If he gets a body, he’s a brilliant footballer,” the Reds boss added. 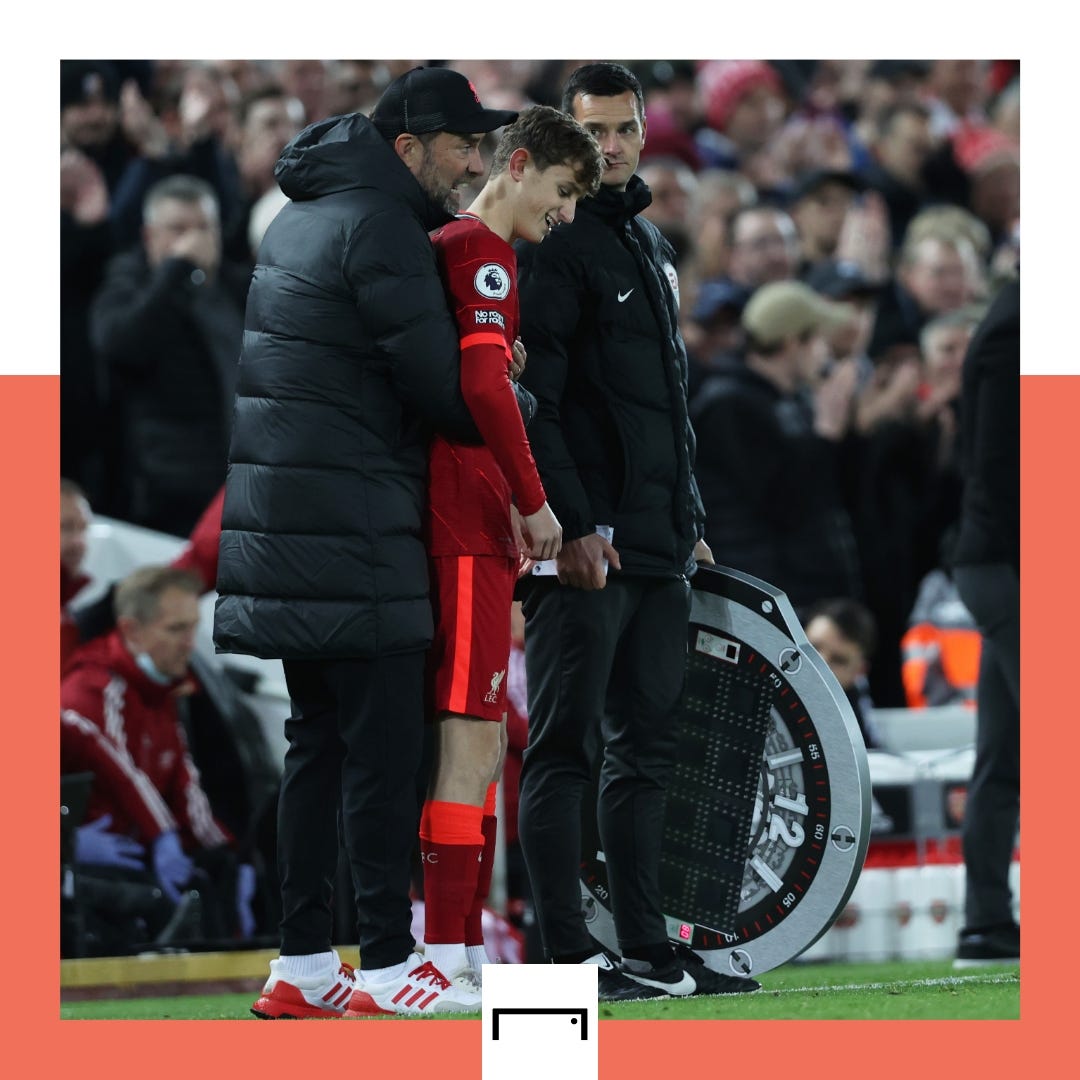 Morton started 2021 playing, and scoring, for Liverpool’s U23 side in a Premier League 2 game at Everton. A few days later he signed a new five-year contract, and gave GOAL an insight into his game.

"I'm more of a box-to-box midfielder,” he said. “I love a tackle. People are always shocked when they see me tackle, but I’ve seen loads of them!

"I'm not just a playmaker. I like to think I can do a bit of everything.”

He and his family have always been Liverpudlians, with season-tickets in the Anfield Road end.

Morton would worship the likes of Steven Gerrard, Fernando Torres and Philippe Coutinho from his front-row seat, but now, improbably, finds himself training and playing alongside another of his idols.

“It’s Thiago now,” he said back in January. “It’s hard to take your eyes off him when he’s playing.

“Sometimes, you find yourself trying to copy the things he does – rolling the ball under your studs, no-look passes, that kind of thing! What a player!”

Fast forward to November, of course, and Morton and Thiago were sharing a midfield in the Champions League against Porto, and sources have told GOAL that the Spanish star has been more than impressed by his younger team-mate’s talent since he began working with the senior group. He, like many others, sees long-term potential there.

Speak to those who worked with Morton coming through the academy and they’ll all say the same thing; it’s his sharpness that stands out, and very little fazes him.

“A model professional,” says U23s coach Barry Lewtas, who has repeatedly spoken of Morton’s “maturity” and ability to “impose his personality” on games.

The biggest challenges are still to come, of course. “We don’t celebrate debuts at Liverpool,” says Alex Inglethorpe, the Reds’ academy manager, and he and his staff will continue to push and challenge and cajole, so that Morton and the rest of this gifted crop of teenagers can achieve their full potential.

“Tyler is in a good place at the moment,” says Klopp. “I’m pretty sure he would give the same answer too!