Sancho, Grealish, Saka or Foden: Who should start in attack for England against Denmark? 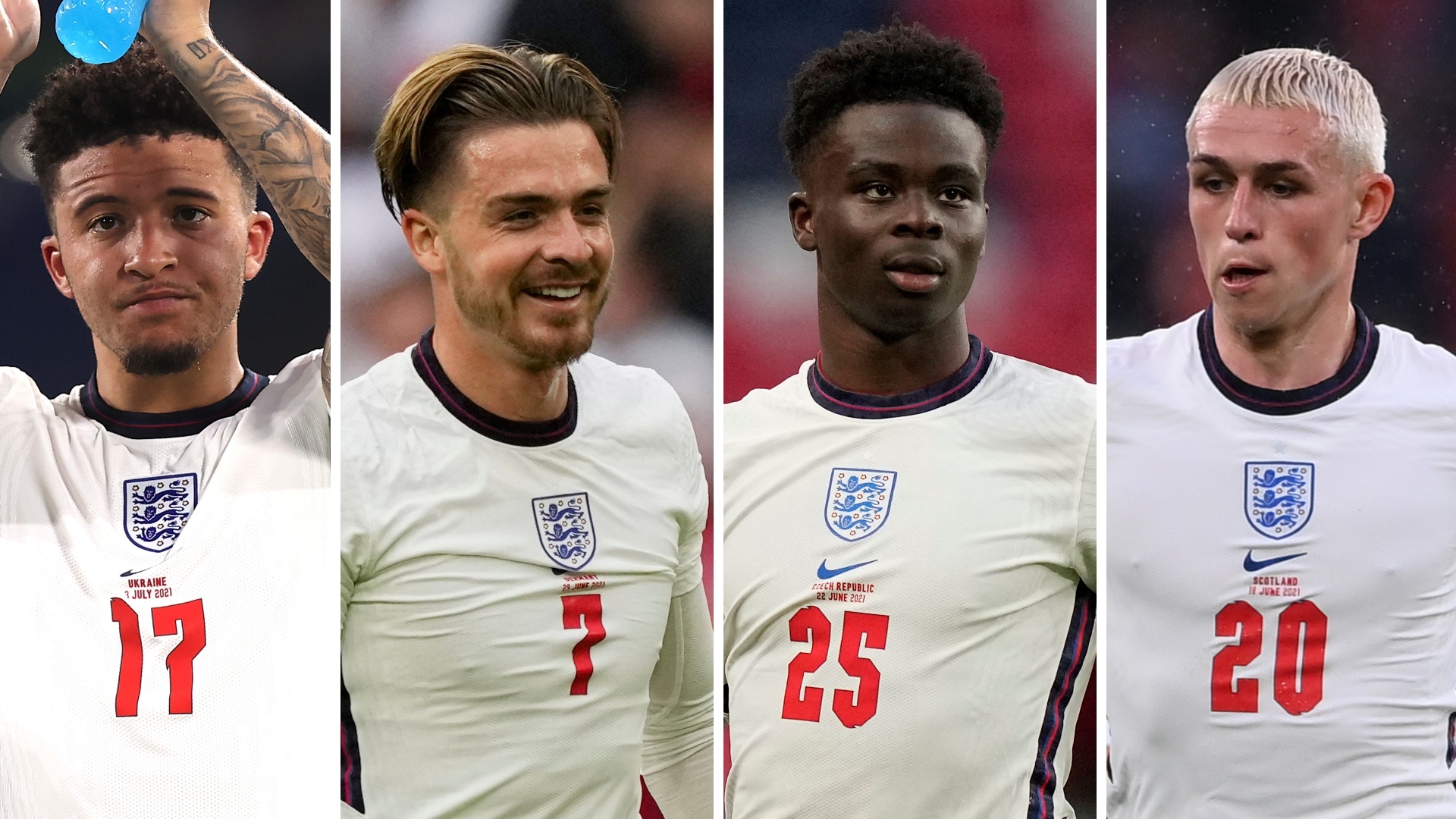 With Harry Kane and Raheem Sterling automatic starters, Gareth Southgate has a decision to make on who completes his forward trio at Wembley Stadium

England's semi-final meeting with Denmark at Wembley promises to be the Three Lions' most unpredictable game at Euro 2020 so far.

Broadly speaking, Denmark have deployed a high-line and high-pressing approach, ranking in the top five on numerous metrics that measure verticality and line-breaking aggression, from ball progressions to attempted dribbles to touches in the opposition penalty area.

But they are also highly flexible. Manager Kasper Hjulmand frequently shifts formations mid-match – generally moving Andreas Christensen into midfield to swap a 3-4-3 for a 4-3-3 – and adapting to the changing rhythms of the game.

Hjulmand is the best tactician Gareth Southgate has faced in the tournament so far, and with Pierre-Emile Hojbjerg advancing from midfield and wing-back Joakim Maehle tearing down the left, England face a significant – and unpredictable - threat.

Denmark do have a notable weakness in the middle, where their two-man central midfield can be overrun (as is so often the case when a 3-4-3 is deployed expansively), and England should look to target this area in particular.

Southgate, therefore, will most likely revert to a 3-4-3, as he did in the last 16 against Germany, in order to mirror Denmark and shut down Maehle, with Raheem Sterling’s intelligent movement infield providing England with the progressive pass that can expose the Danes' two-man midfield.

But a 4-2-3-1 is not out of the question for Southgate either, and while Sterling and Harry Kane are automatic picks, the England boss has a huge decision on his hands regarding the right wing slot.

In such a nervy and unknowable semi-final, this one selection could prove decisive. But who will - or more importantly, should - he pick?

Injured for the 4-0 victory over Ukraine, Saka may be immediately reinstated to the team for the semi-final.

What the Arsenal teenager offers Southgate is an ability to pick the ball up in deep positions and dribble straight through the pitch, yanking England up the field by wriggling through the lines.

It was an essential aspect of their last-16 win overGermany, who seized the initiative in the first 10 minutes but lost it following a couple of surging, crowd-pleasing runs down the right from Saka.

In fact, his importance was such that Southgate decided to go like-for-like with his replacement in Rome…

Like Saka, Sancho has the technical ability and the fearlessness to take on his opponent in deep areas, something that could prove very useful against such an aggressive Denmark side.

England are likely to find themselves counterattacking a lot, which favours a speedy forward on either side of Kane – and one who can cut inside and create chances between the lines like Sancho.

The new Manchester United signing was busy and purposeful from the outset against Ukraine, drawing defenders towards him and regularly making intelligent runs in behind the opposition.

His energy and positional sense – moving across the width of the pitch – is also similar to how Saka has been asked to play at this tournament.

In a toss-up between the two, Sancho edges it on attacking quality, but Saka is the safer option defensively. If Southgate wishes to sit back to nullify an attacking Denmark side then hit on the counter with pace, Saka makes more sense.

The cult hero of England’s tournament, Grealish has seen his playing time diminish as England go deeper in the competition, and that is perhaps no surprise: Southgate does not trust him defensively, even though his tackling and pressing stats show a very hard-working footballer.

In short, Grealish is strong defensively in the opposition half, but he is not as good at knowing when to drop.

On the ball, he would offer England a different approach to this game. Grealish slows the game right down, hanging onto the ball for long enough to drag three or even four opposition players towards him.

Against Germany, his slight pause before releasing the ball to Luke Shaw simultaneously distracted the defenders from the England left-back and Sterling – who popped up to score the opener.

That is more likely to be useful as an impact sub, should England be struggling and – as legs tire – should they be facing a deeper and increasingly nervous Denmark defence.

Grealish is a good option to unlock a deeper team, although at Aston Villa he regularly carries the ball up the pitch on the counter, using his deceptive speed to break the lines.

Nevertheless, he is less effective at this on the right, decreasing his chances of starting. Another super-sub cameo is probable, however.

What Foden offers England is the craft and intelligence of a central midfielder. The coaching he has received from Pep Guardiola across a variety of positions, including as one of two 'free eights', means he can cut in from the right and act as an extra midfielder.

Denmark's midfield operate in a two, and Czech Republic showed this can make Hjulmand’s team vulnerable in Saturday'a quarter-final.

Once the Czechs had bypassed the first wave of Danish pressure, they made good use of the midfield gaps to create an open first half. Foden, then, could be the perfect player to drift inside and help outnumber Hojbjerg and Thomas Delaney.

The Manchester City forward stands a chance if England go with a 3-4-3, although if it is a 4-3-3 then Southgate will not want too many bodies crammed through the middle, and frankly whatever the system Foden’s chances look slim.

Put bluntly, England have three right wingers who have performed better than the 21-year-old at Euro 2020.

Rashford has come off the bench in four of England’s five matches, amassing 82 minutes of football from the left wing against Croatia, Czech Republic, and Ukraine, and as a striker against Scotland.

He has made little impact in any of the matches, though, failing to create a single chance or take a shot, although it is worth noting he averages 4.3 successful dribbles per 90 – more than any other England player.

This captures his directness, but also his bluntness in this approach. Rashford is more of an impact striker, leaning infield to give England an attacking brute force that lacks the guile or creativity of Southgate's other options.

That, coupled with the fact he is yet to play a single minute on the right-hand side, means Rashford will not start.

The wildcard play would be to double down on the midfield options and move to a 3-5-2, with Sterling and Kane together up front.

Southgate’s meticulous preparation throughout the last three years, however, means that he is very unlikely to suddenly introduce a new formation for the semi-final.

An extra midfielder would, though, give England a serious advantage through a potentially porous Denmark midfield, with Mason Mount, Foden, or Jude Bellingham coming in to help England control possession.