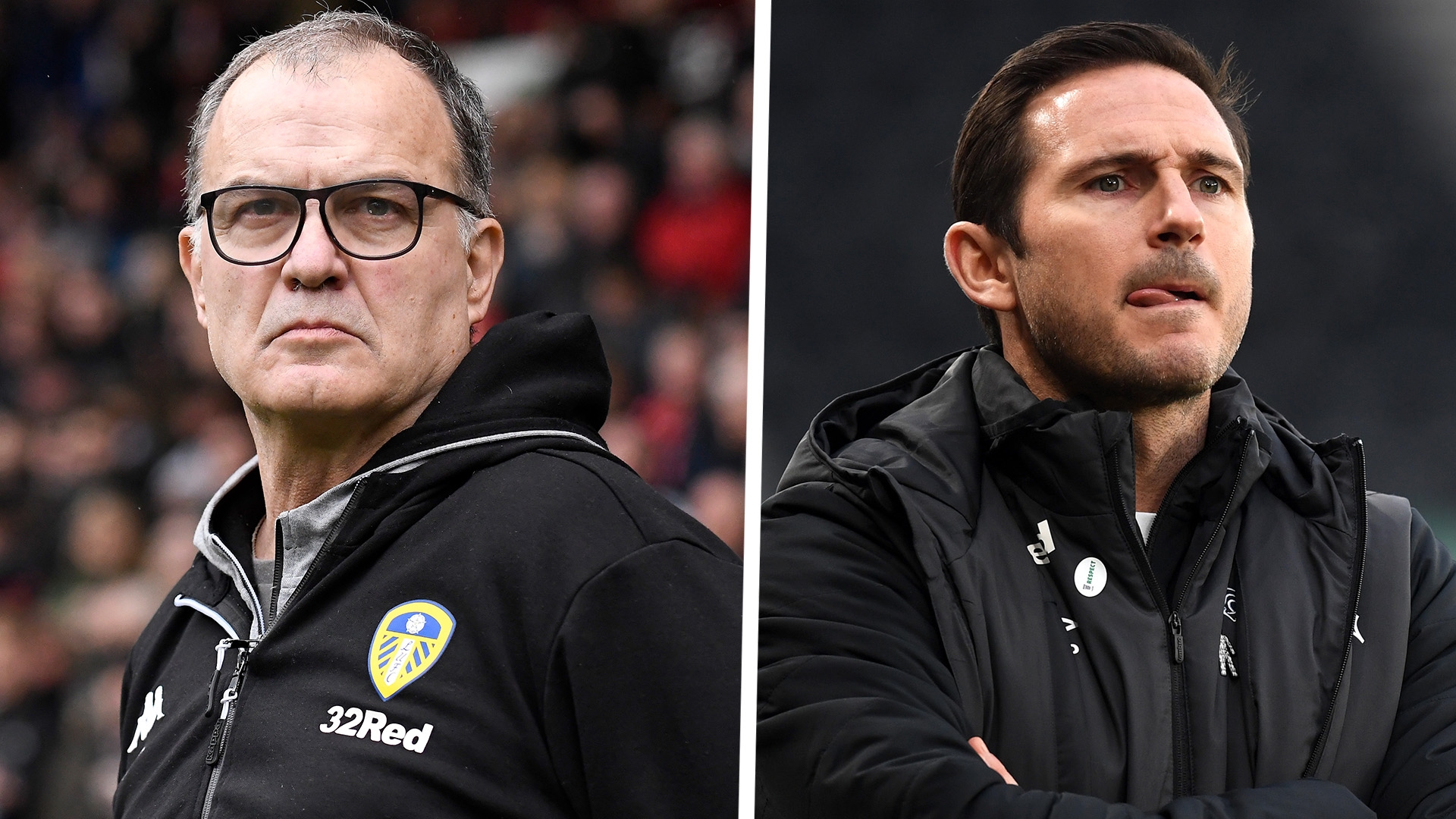 Mention spies and you might think James Bond or Jason Bourne, but Marcelo Bielsa? Goal takes a look at the 2019 scandal that gripped English football

English football whipped into a frenzy in January 2019 when the actions of Leeds United manager Marcelo Bielsa stuck in the craw of Derby County and their boss Frank Lampard.

The iconic veteran coach's methods of preparation were called into question after a dubious training ground incident, which has since been dubbed 'spygate' in reports and on social media.

Bielsa was defiant about the issue, but his honesty in the face of scrutiny won him some begrudging admiration from detractors.

But what exactly was it and why did it prompted so much fury? Goal brings you everything you need to know, including who was involved, the punishment handed down and more.

'Spygate' is the term used to describe the controversial use of covert surveilance by Leeds United head coach Marcelo Bielsa to gather information on opposition teams.

The issue came to light in January 2019 when Derby County alerted police to a man "acting suspiciously" outside their training ground. It subsequently emerged that the man in question was a Leeds employee.

Officers have just attended the Training Ground for @dcfcofficial After a suspicious male was seen at the perimeter fence. Excellent searching conducted & male was located. All checks above board!
Keeping the team safe to bring home a win against #LUFC on 11th! #SpyingIsCheating pic.twitter.com/a12Zj8gISX

A day later, in the build up to the Leeds' game against Derby, Bielsa admitted that he had sent the individual to observe the training sessions.

The former Athletic Club and Argentina coach explained that he had been implementing the same approach for a number of years, but that did not appease Derby boss Frank Lampard.

"On a sportsman's level, it's bad. If we are going to talk about culturally and say 'I did it somewhere else and it's fine', I don't believe that," the former Chelsea midfielder told Sky Sports.

"It's disrupted our build-up to the game. People will say I am making an excuse, but I will speak like this after the game whether we win, lose or draw."

Was Marcelo Bielsa punished for 'spygate'?

The reaction to 'spygate' by Frank Lampard and Derby County, as well as the English media prompted the EFL and the FA to launch formal investigations.

A day after the EFL confirmed that it would be investigating, Bielsa staged an emergency press conference, in which he revealed that he had done the same thing for all of his opponents.

"I’ve already said that I’m the one responsible. The club are not responsible whatsoever. The person who did it followed my orders," said the Argentine.

"Many condemned me saying it was immoral, unethical and violated fair play. Some say it was cheating. The club felt obliged to make public excuses to Derby.

"I assume the fact that my behaviour is observed. I observed all the rivals and we watched all the training sessions of the opponents before we played against them.

"It’s not a violation of law. We can discuss if it’s right or wrong. I didn’t have bad intentions nor did I try and get an unfair sporting advantage."

💬 | Marcelo demonstrates the analysis his team goes through for each opponent, and how it totals more than 300 hours of work pic.twitter.com/asfGA6Wadm

Despite the fact that he maintained he had not broken any rules, Bielsa decided to take direct responsibility for the fine by paying it out of his own pocket.

"The sanction I received that the federation [Football Association] gave us - £200,000 - is a financial sanction the club received, not against me, but I am responsible for it and that's why I paid from my pocket the financial sanction," Bielsa told reporters.

Some pundits felt a fine wasn't enough. Former Newcastle United and England midfielder Jermaine Jenas, for example, expressed the view that the club should be docked points, a view shared by Bristol City owner Steve Lansdown.

However, such a course of action would have been "a joke", according to ex-Arsenal star Paul Merson.

"You're talking about a massive club like Leeds, who have been out of the biggest league in the world for a long time," Merson told Sky Sports.

"To punish their fans, that's not right. If they found them guilty, give them a fine, but don't punish the fans."

Other managers who have used 'spies'

Long-time Bielsa admirer Pep Guardiola said that the practice of spying on rivals is commonplace across the spectrum of world football, revealing that he experienced it during his tenure at Bayern Munich.

"In other countries, everybody does that," the Catalan told reporters. "When I was training Bayern Munich there were people on a little mountain – opponents with cameras – watching what we were doing.

"It was cultural for the clubs, not because I said, 'you have to go to do that'. It was part of the culture."

However, the Man City boss dismissed the idea that he would indulge in similar tactic, saying: "I'm not going to send anyone to spy on Huddersfield. If that is the question, forget about it."

Liverpool boss Jurgen Klopp also managed in Germany and stated that he is not a fan of the practice either, pointing to the fact that curtains are used to conceal certain training sessions at Melwood.

"I can understand [Bielsa] wants to have all the information, we all want it, but we have to accept we don't get it," Klopp said.

Chelsea boss Maurizio Sarri said that spying took place in Italian football, but that he did not do it. "No," he replied when asked if he deployed underhanded techniques. "Because I don't have very good spies, I think!"

Reporter: Did you spy on opponents in Italy?

Interestingly, it is not the first case dubbed as 'spygate' in English football either. In 2014, Crystal Palace were fined by the Premier League when they were found guilty of breaching rules relating to 'good faith' after the club obtained information about Cardiff City's starting XI the day before a game.

As alluded to by Guardiola, it appears that spying on opponents was indeed part of a culture in Germany. As recently as last December, Werder Bremen admitted to flying a drone over a Hoffenheim training session ahead of a meeting between the clubs.

"If the action in Hoffenheim led to a certain uncertainty on the training ground, then we would like to apologise for that," said Bremen CEO Frank Baumann.

"A drone was flown for a short period, but didn't fly over the pitch their team was training on. There was no threat. Everything has been resolved with Hoffenheim.

"We have done nothing illegal. That would go against our club principles. We apologise to Hoffenheim if the incident has unnerved them. This is all we have to say on the matter."

Newly instated Southampton boss Ralph Hasenhuttl revealed that he had deployed 'spies' while managing in Germany.

"I wasn't standing there myself, but I did send spies," Hasenhuttl explained. "'Spies' if you want, or just normal visitors.

“But there are still a few training sessions that are without the public and there it also happens that sometimes you have to pick someone out of the woods behind the pitch!

Former Liverpool midfielder Dietmar Hamann believes that Lampard has "lost the plot" in his condemnation of Bielsa, noting that individuals outside the club often watched training when he played for the Merseyside outfit.

Hamann said: "At Melwood, when I was with Liverpool, there used to be any number of kids standing on bins behind a wall watching us train.

"How precious do football clubs think they are? Let’s get some perspective, please."