Gonzalo Higuain has been backed to make a difference at Chelsea by Willy Caballero after the striker made his debut in the FA Cup win over Sheffield Wednesday.

Argentina international Higuain was warmly welcomed at Stamford Bridge as Chelsea eased past their Championship opponents but the forward had limited opportunities or time on the ball in the 3-0 success.

Chelsea boss Maurizio Sarri is happy to have been reunited with Higuain following their prolific time at Napoli, after the Blues took over AC Milan's loan deal with Juventus, leaving them with an option to buy him for £32 million in the summer.

Goalkeeper Caballero thinks that Higuain can make an impact at Chelsea but he believes that his team-mates need to learn to understand his compatriot’s movements.

"He has begun training well in the last couple of days and I think our team-mates have to get to know him a little bit more," Caballero told  Goal . "For sure, Sarri and his staff know him very well.

"I also know him very well, but the rest of the team needs more time to do it. We are going to find great performances with him in our team in the future. He can do everything.

"It doesn't matter what he did in the past with other teams, he can help Willian, [Olivier] Giroud, Eden [Hazard] or whoever plays beside him. He plays to a great level of performance.

"It is too easy to say [his arrival will help us win things] but we have to see if him, and the rest of the quality guys in attack, can make it happen. It is easy to say Higuain is going to help us or to project in the future but it is up to us to do it.

"We have to go step by step. He is happy to be here and with this we are capable of winning a lot."

Higuain's arrival comes as Alvaro Morata looks set to join Atletico Madrid in a similar loan-to-buy deal, after a spell at Chelsea where he has struggled to reach the heights that many had predicted for him. 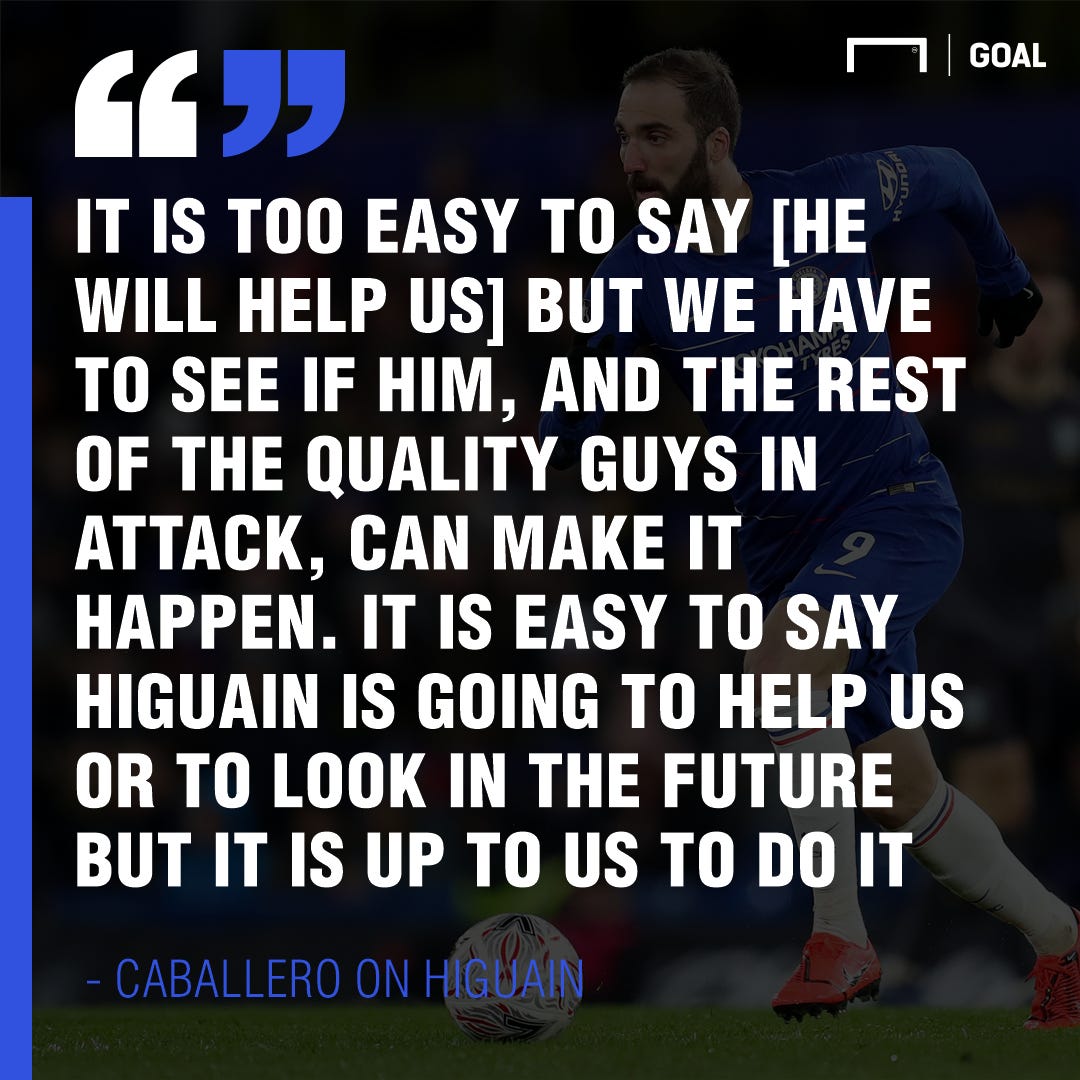 Caballero revealed how he played his part in getting Higuain to move to Chelsea as the 31-year-old asked questions about what it might be like to join the FA Cup holders.

"We have been in touch [about the move] for a long time," Caballero added. "I gave him every bit of time that a friend can give to another. Also, as a team-mate. We talked about the Premier League, this city, the club, about everything.

"When you are asked, you be honest and say the truth. Now, it is a reality. It is true and he is here. The first day is always a little bit stressful for a player and it was for him. But it is fun for me because I am over a year in the club and I am watching him as the new one in the changing room.

"It was fun to see him again and to be in the same team again, then after few minutes it becomes natural."

As for Caballero’s own playing time, the 37-year-old has found opportunities harder to come by since Chelsea switched managers from Antonio Conte to Sarri, even though he was always signed to be a back-up keeper. 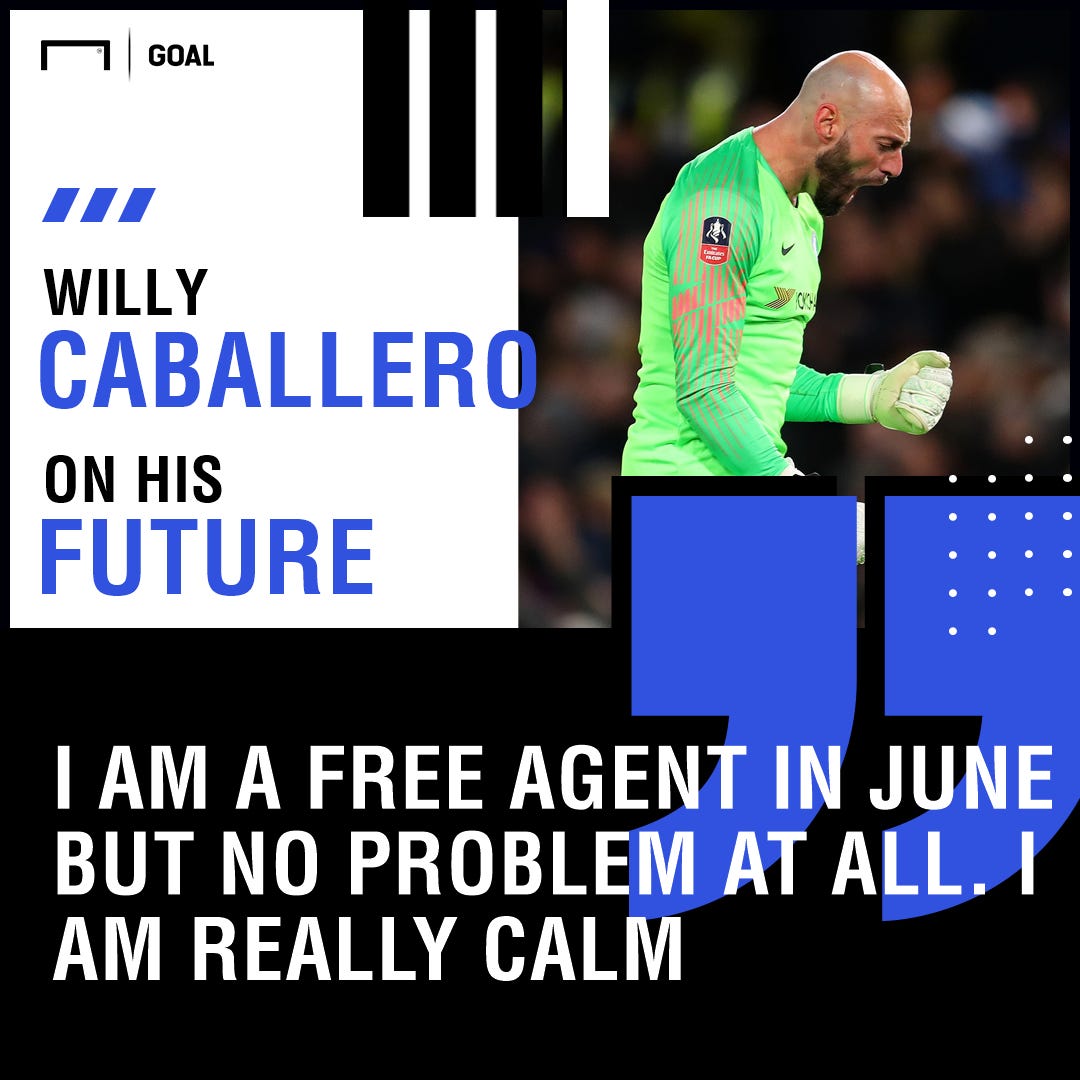 Along with the likes of David Luiz, Gary Cahill and Olivier Giroud, Caballero is one of many players whose contract expires at the end of the season. However, Caballero remains happy with life at Chelsea as he aims to keep number one goalkeeper Kepa Arrizabalaga on his toes.

"In the end, we will see what happens," Caballero said about his future. "I am a free agent in June but no problem at all. I have experienced this before so I am really calm about this.

"I have had no conversations at all. I am really happy here. I am doing my job when I have the opportunity. I am trying to do well, trying to work very hard because now I got my chance. As a goalkeeper, you have to be ready for the whole season.

"I think we did a great job [against Sheffield Wednesday]. We saw this yesterday and also today with Tottenham going out, it is another big chance for us. We have to respect this competition in every stage. It wasn't easy to win today.

"We wait for the draw and see who's next. It doesn't matter, we have to play like we did today and have the opportunity to go through again."