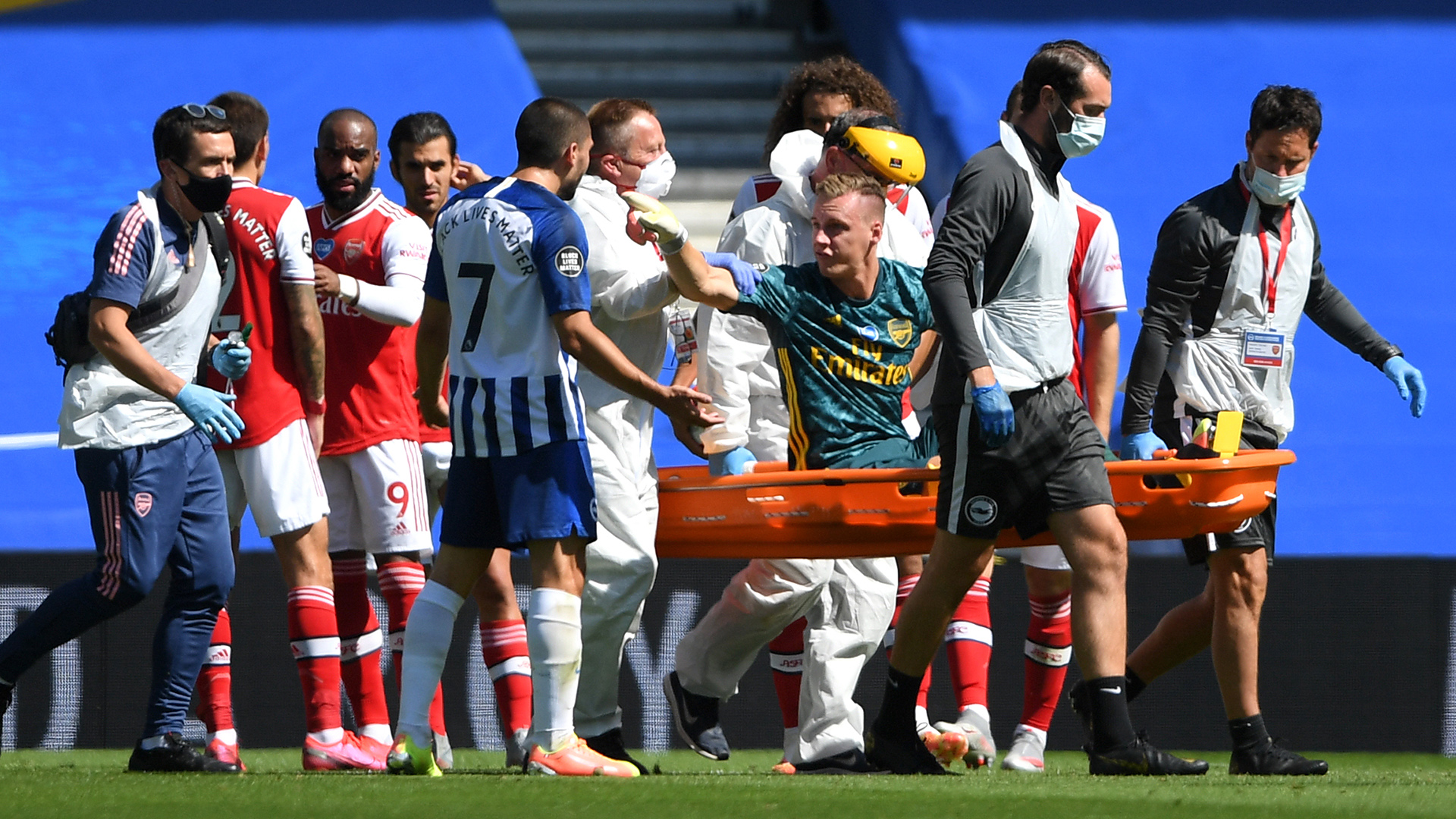 Arsenal suffered yet another injury blow when goalkeeper Bernd Leno had to be carried off on a stretcher with what looked like a serious leg injury during the first half of Saturday's Premier League clash with Brighton, with the German appearing to blame Seagulls striker Neal Maupay for the incident.

The 28-year-old screamed in agony when his right leg buckled underneath him after rushing out to claim a high ball on the edge of the penalty area.

His concerned team-mates quickly became aware of the seriousness of the injury and immediately called for the medical team to come onto the pitch.

After receiving extensive treatment, Leno was carried off the pitch on a stretcher but not before angrily remonstrating with Maupay, who was in close proximity to the keeper as he competed for the high ball.

Replays showed Maupay had barged into Leno after the former Bayer Leverkusen keeper had claimed the ball, which meant the Gunners' number one was off balance as he planted his foot.

Leno also appeared to be concerned about carrying the ball outside of the penalty area, which contributed to his awkward landing.

Oh this is just unbelievable. Replay looks awful. So sad for Leno. The Arsenal keeper screams at Maupay as he is stretchered past him. Understandably furious. Totally needless challenge. Martinez on.

Leno, who joined Arsenal from Leverkusen in the summer of 2018, has been an ever-present in the Premier League this season, with his replacement Emiliano Martinez restricted to FA Cup, Carabao Cup and Europa League duty.

After being taken off, Leno received a message of support from Manchester United goalkeeper David de Gea.

Argentine Martinez has been at Emirates Stadium since 2011 but this was just his seventh Premier League appearance for the club.

It is the second injury blow for Arsenal in as many matches after defender Pablo Mari suffered ankle ligament damage against Manchester City on Wednesday and was ruled out for the rest of the campaign.

They were also without defender David Luiz on the south coast after the Brazilian was sent off for conceding a penalty during a calamitous performance in the 3-0 defeat at the Etihad Stadium.

With Sokratis, Calum Chambers, and Cedric Soares also sidelined, Mikel Arteta's side were already shorn of several defensive options for the trip to the Amex, with this latest blow merely adding to their already substantial defensive struggles.