'If you're not first, you're last' - How LAFC's latest technological trial could change scouting forever 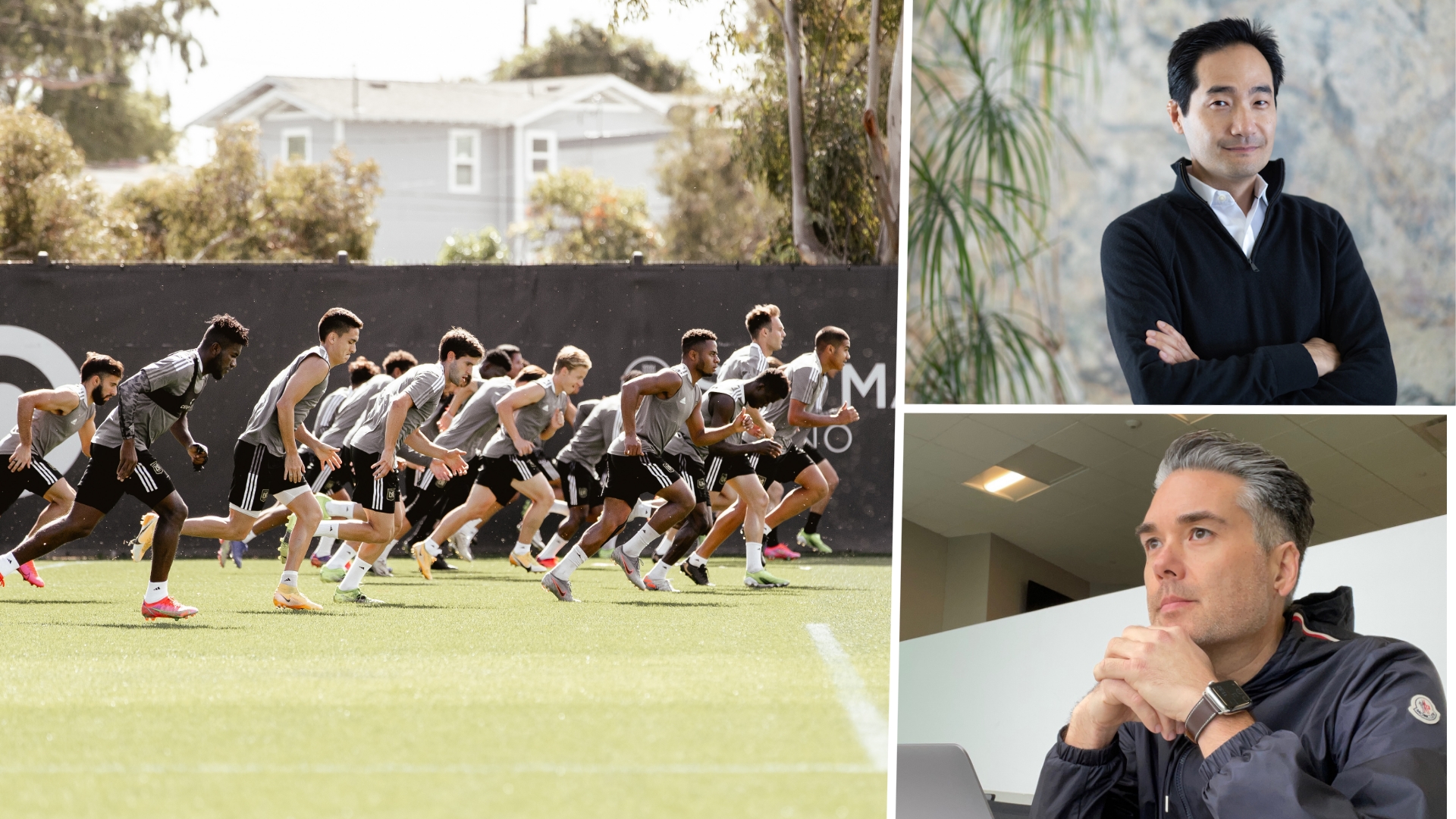 Like it or not, the marriage between technology and soccer is not going anywhere.

And, at Los Angeles FC, Christian Lau's job is to be the counselor who ensures the union exists in perfect harmony.

Lau, the club's chief technology officer, has his hands on just about everything, from beer sales right on up to injury prevention and scouting.

LAFC's very home, Banc of California Stadium, was built under Lau's guidance, with fiber from the ground up that allows fans to access social media in real-time from a place that would normally be a dead zone.

Technology, in many ways, is at the heart of everything LAFC does. It is a club that's determined to be a leader, an innovator, in a landscape of fierce competition between teams for even the smallest edge.

If there is something that is going to change the game forever, or a system that will make the stadium experience just a little bit better for anyone coming in on game day, it is Lau's job to find it, learn about it and, most importantly, make it work.

"Being first is something that we'd like to do just because if you're not first, you're last, as our owner Ricky Bobby will tell you," Lau tells Goal with a laugh, alluding to co-owner Will Ferrell's famous role in 'Talladega Nights'.

"I think the reality is that we're looking at technology, looking at things operationally, and how they can advance us as an organization and help our players prolong their careers. There are so many different things that we focus on."

LAFC's latest partnership is one that marries that human element and that tech element in a way that has already aided the club's scouting in this pandemic-hit landscape.

Earlier this month, LAFC announced a partnership with Uplift Labs to trial the company's newest technology, which allows coaches and trainers to view and analyze player movement in real-time using just iPhones and iPads.

The partnership also involved the Verizon 5G Labs, which has provided LAFC with hardware to enable the AI-powered analytics platform.

Using those devices, coaches can view 3D mockups and biometric data straight from their phones without the use of restrictive sensors.

The technology is already in the hands of several teams all over the world, but the partnership with LAFC's first foray into soccer and, if all goes to plan, it will not be the last.

"Part of that, I think, has some ulterior motive, so to speak, in a good way, which is the findings and learnings that we derive from our partnership here with LAFC and Uplift, certain things I think could be transferred back into the Premier League or to the clubs on the European continent."

The idea, Kabayama says, stems from his own experiences. Throughout his career, which has seen him serve as country manager at LEGO Education Japan, director of education at Apple Japan, and most recently the president of Tesla Motors Japan, Kabayama found comfort in exercising.

What he did not find comfortable, though, was the injuries that would come with it. And it was from those injuries that his ideas began to take shape.

In the ever-evolving world of technology, Kabayama believes that new projects cannot be designed in search of a problem, but rather with a problem already in mind. Every single new piece of technological advancement must begin with a key question: what am I trying to do here?

"I used to do CrossFit quite intensely, and, unfortunately, I used to get injured quite intensely as well," he says with a laugh. "I kept thinking, 'Man, with all this tech around us, iPhones and iPads, why is it that I have no idea how I'm moving and what's wrong with my technique that's causing these injuries?'

"So that was sort of the lightbulb moment, when my two co-founders and I said, 'Okay, there are 8.6 million or more athletes every year that get injured playing sports. A good lot of them, maybe I think over 50 to 60 per cent are youth. This is a real problem.

"So we said that this is where we're going to make, hopefully, a dent in the athletic performance universe."

And so began Uplift, which developed two pieces of technology that LAFC are trialing today.

The first is called Uplift Capture. Using just two iPhones or iPads, coaches can generate 3D biomechanics to understand how an athlete is moving. They can assess consistency and inconsistency in that movement, allowing them to have legitimate data that shows more than just standard video.

For example, in sports like baseball and golf, the technology has been used to analyze players' swings and find the little deficiencies that make all the difference between success and failure.

In soccer, LAFC are using it to analyze players' technique when it comes to lateral passing, free-kicks and, perhaps most importantly, running form, allowing them to catch potential injuries before they even happen.

"If you were doing a drill, I could stop and do instant replay and play it back to you," Kabayama says, "and I could annotate, almost like a Telestrator on the TV, and say that your plant foot is off or your arm angle if you're a quarterback or pitcher or whatever.

"It has things where I'll be able to spotlight different athletes if I'm trying to do group training. So that's obviously from a remote coaching application that's super powerful.

"It's not just, 'Hey, we can talk to each other and I can see you do something'. It's where I can actually analyze what you're doing and look at body angles."

The other technology, just called Uplift, is the company's library training module which has become an important tool for several non-soccer teams during the pandemic.

That system has been used by baseball teams over the past year, allowing coaches a more in-depth way to get their instructions across despite not being in the same room as players.

So far, Lau is happy with the partnership, which he says has had benefits from the senior team all the way down to the youth level within just the first few weeks.

"On the academy side is where I think Uplift ends up being the most value to us is. You've got the academy players, and most of them are in Southern California, but as you start to look at scouting opportunities, we're looking at players around the country.

"You even have players in other countries, and we won't name countries just because we don't like to talk about where we're scouting, but we've actually got our hands on a lot of spaces around the world.

"And the reality with that is we can't really travel to those locations right now, but if we have something like Uplift that allows us to evaluate a player in real-time, and then go through the motion of actually working with them one on one, then there's a tremendous value to that.

"Then as things open up, from a technology perspective, we could still travel but we're likely going to continue using Uplift for those types of cases, because it's not always worth the time to get on a plane for [general manager] John Thorington or [head coach] Bob Bradley, because they are the two primaries that go and visit players all the time. So that's how we're looking at it, and I think there's nothing but upside to Uplift."

But Lau knows that LAFC's success does not live or die with his projects. He is no Carlos Vela, Diego Rossi or Bradley, who will be the ones that will determine whether or not the club reaches its goals at the end of the season. His job instead is to make their lives just that little bit easier by giving them access to systems and data that others may not have.

"Frankly, I think human intuition, when it comes to sport, so football in our case, is still the priority," he says. "The technology helps you make some decisions and it might help prove specific things that you're trying to figure out, but you got to have a person like Bob Bradley, and his mind and his experience with football will make all the difference.

"An AI is not going to predict which players are in your starting 11 in a meaningful way. Yes, statistically, it can show you that the starting 11 should be X, but the realities of the day and the nuances of where a player's head might be at or physically in training that week, all of those things have to factor in.

"For the foreseeable future, I think there's going to be the human element and the tech element. I don't see robots with AI, running up and down the pitch on the sidelines anytime soon!"