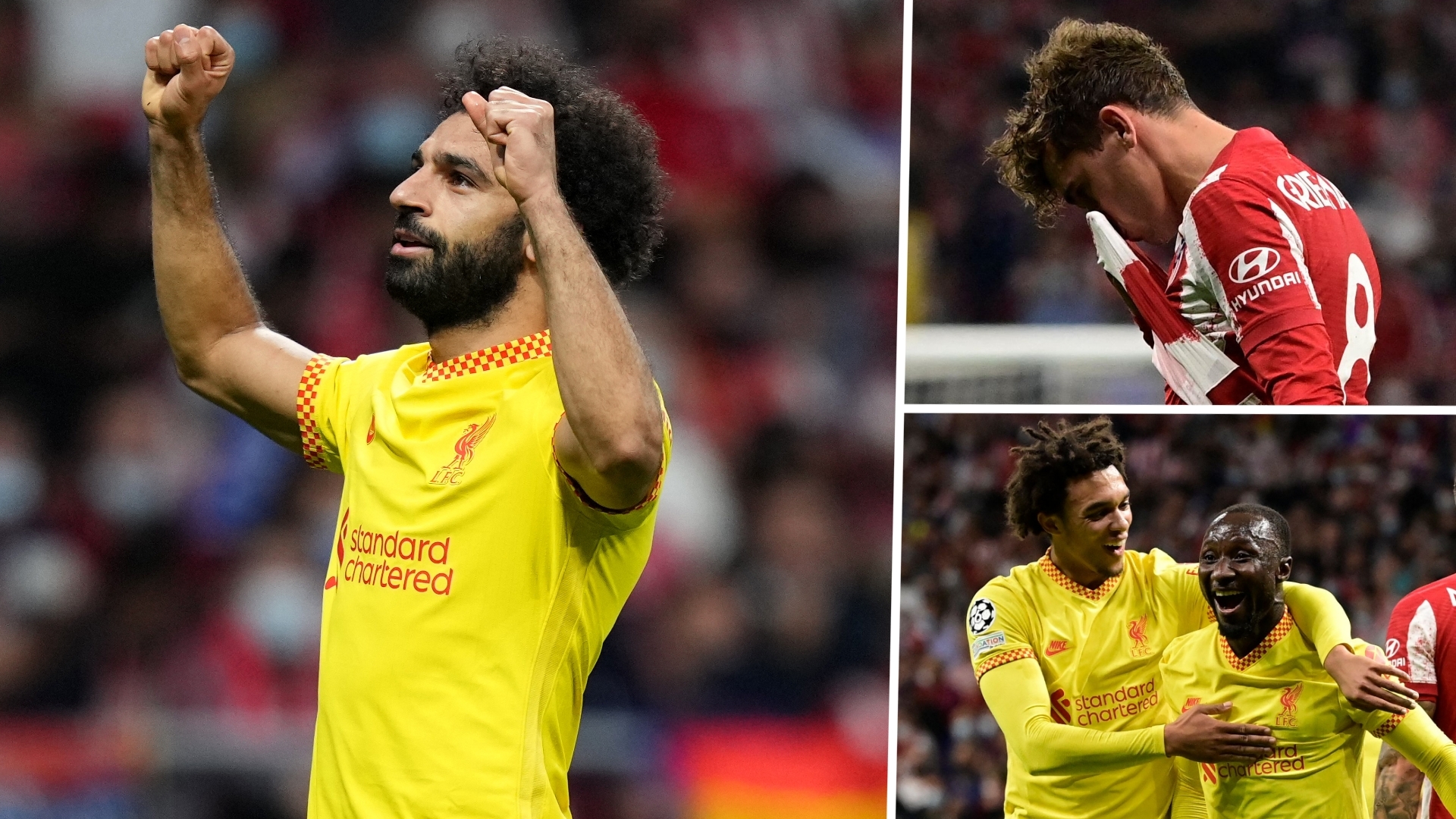 Where do you even begin with this, other than to say ‘wow’?

Liverpool have been involved in some Champions League classics down the years, but this was a new one.

They do not usually happen in the group stage, do they?

There were times when this felt more like the second leg of a semi-final. The intensity, the madness, the suspense and the emotion felt here belongs on the biggest of stages.

It was high drama, and then some.

In the end, it went the Reds’ way. Mohamed Salah’s penalty, 12 minutes from time, secured Jurgen Klopp’s side the win. Three precious points, against an Atletico Madrid side considered something of a bogey team before kick-off.

That should be qualification from Group B done and dusted. Liverpool have three wins from three, and a five point-advantage at the top. Beat Atletico at Anfield on November 3 and they are home and dry. If not, they will get a second chance against Porto later in the month.

Let’s leave that, though, for now, and focus instead on one of the maddest, strangest and most wonderful night’s football you could wish for. If the Champions League is football’s No.1 competition, then it needs games like this to make it so.

It had everything. Five goals, a red card, two penalties awarded, one of them overturned. Touchline theatrics that belong on Broadway, enough needle to last a lifetime and an atmosphere that even Anfield will do well to match in the return meeting.

“We shall not be moved,” sang the travelling Kopites, high up in the Gods, at the final whistle. Below, their yellow-shirted heroes embraced and applauded, puffed their cheeks out. A job well done, in the end.

Diego Simeone had long since departed. The Atletico boss did not hang around to shake hands or bump fists with his opposite number at the end. Klopp was no great fan of the Argentine anyway, and was left annoyed, but probably not surprised, by Simeone’s hasty exit. He played it down in his post-match press conference, mind.

Maybe he should see Simeone's strop in a different way. The last time these sides met, in March 2020, the Atletico boss had run the length of the Anfield touchline to celebrate in front of his joyous supporters. He milked the moment, and fair enough. Here, the tables were turned and ‘Cholo’ did not like it one bit.

He may believe his side deserved more and he was probably right. Atletico responded superbly to falling 2-0 down inside 13 minutes, and had Liverpool on the ropes for large spells. They are not a particularly nice team, but they’re a damn good one.

Simeone may wonder why Antoine Griezmann, who scored both Atleti goals, was shown a red card with the game delicately poised at 2-2, but he only needs to see the replay to understand. Griezmann’s foot was high, and made contact with Roberto Firmino’s head. He did not mean it, but he had to go.

And Simeone may also ask why the penalty awarded to his side late on was overturned following the longest, and most dramatic of VAR reviews. Referee Daniel Siebert had given it on first viewing, judging that Diogo Jota had fouled Jose Gimenez, but changed his mind after reviewing the incident on his pitchside monitor. Even Klopp was surprised at that one.

Simeone was already fuming, having seen Liverpool awarded a penalty moments earlier. Even he could have no complaints with that decision though, with Mario Hermoso clumsy in the extreme in upending Jota beneath a high ball. The madness of it all seemed to get to the Atletico defender, whose actions was unnecessary and costly.

Salah did the business from the spot, same as he had done at the same end here in the Champions League final. The Egypt international finished the night with two more goals to his name, having been awarded Liverpool’s first despite suspicions of a nick off James Milner and/or Geoffrey Kondogbia. He's now Liverpool's all-time record goalscorer in the Champions League. Another day, another milestone, for this genius and relentless goalscorer.

He struck inside eight minutes, and five later, Naby Keita made it 2-0 with a brilliant 20-yard volley, flashed past Jan Oblak. From nowhere, Liverpool were cruising.

Naby Keita with a rocket of a volley! 🚀

Liverpool are dominating early on against Atletico as they take a two-goal lead inside the first 15 minutes! pic.twitter.com/Nwi8xtDycz

Not for long. Atleti, wounded, roared back. Griezmann poached one to make it 2-1, and then showed all his class to take Joao Felix’s pass and fire home an equaliser. Liverpool were hanging on by half time.

Griezmann’s red changed things, but still the game was in the balance heading into the closing stages. Atletico buzzed and snapped and fought, threatening every time they attacked. Alisson Becker stood firm, once, twice, three times.

Then the madness. One penalty awarded, and scored, another one overturned. Simeone, black-suited and crimson-faced, berating everyone within earshot.

Luis Suarez entered the fray, the pantomime villain sent on for the final act. Liverpool fans booed him, Virgil van Dijk felt his studs rake down his achilles at least twice. Suarez was exactly what Suarez is, but could not help his side find the leveller.

Liverpool held out. It was far from pretty but it will be celebrated appropriately, in the visiting dressing room, on the flight back to Merseyside and in the bars and squares of Madrid.

"How we win it, I couldn't care less," a relieved Klopp told BT Sport at full-time. "The dirty ones are the really important ones."

He can say that again. Liverpool fans love this city, and why wouldn’t they? Some of their greatest memories were made in the Spanish capital.

This was another night to remember. A group-stage match for the ages, you could call it.

It may be some time before we all get our breath back.