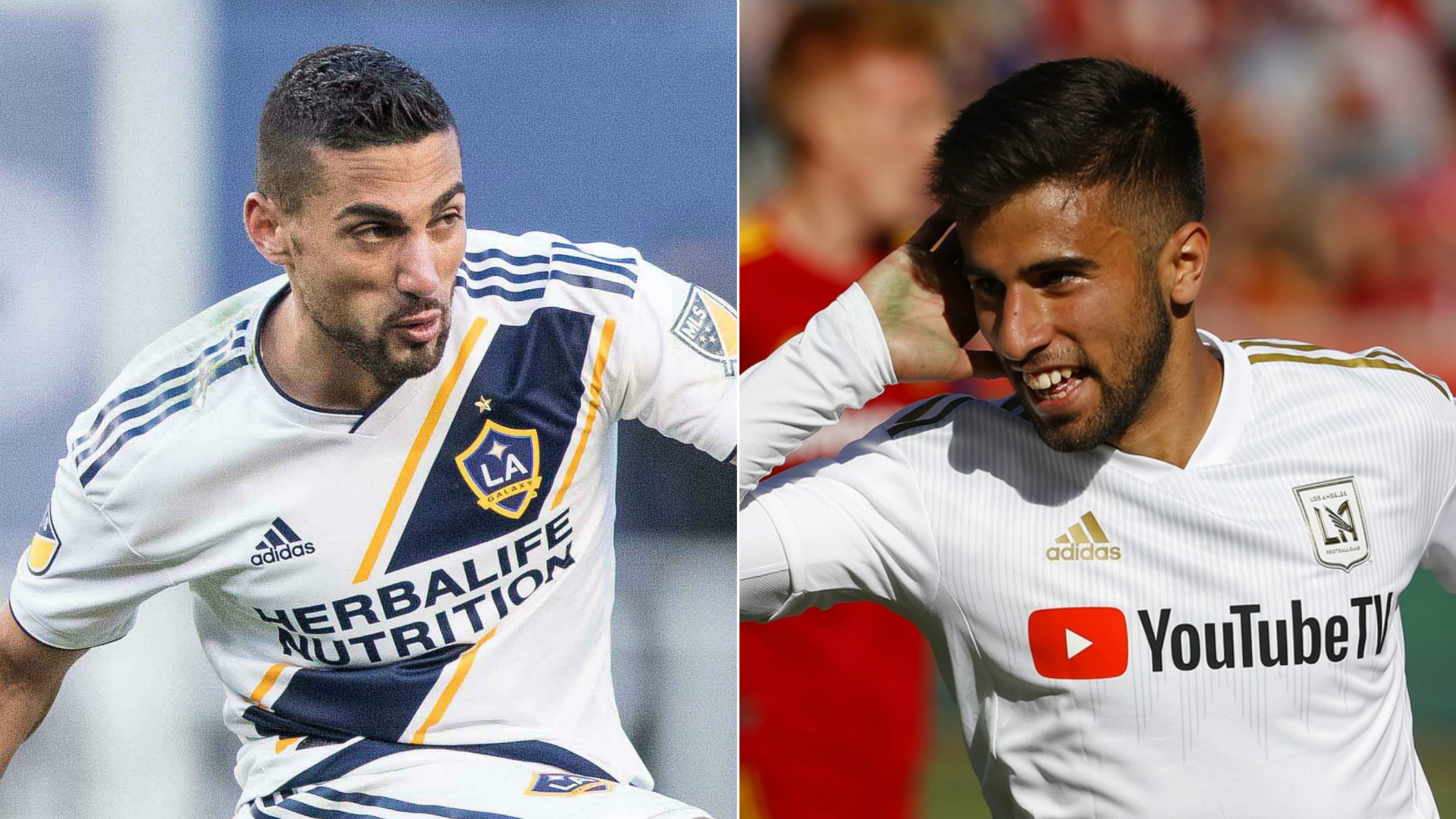 If last week's international break-shortened MLS schedule felt a little unsatisfying then get ready for the make-up menu, as a jam-packed selection of enticing matchups fill out a loaded pre-Easter slate.

There is no match bigger than the first installment of the LA Galaxy-Los Angeles FC rivalry. Whether you call it "El Trafico" or the "LaLa Clasico," it is shaping up to be a must-see event. As if the intra-city rivalry wasn't enough of a draw, Zlatan Ibrahimovic has arrived in Los Angeles and is expected to be available for a potential MLS debut at StubHub Center.

Meanwhile, Orlando City will host Sacha Kljestan's reunion with the New York Red Bulls. The Orlando City midfielder will take on Jesse Marsch and his former team for the first time since being traded over the winter. The Lions will be boosted by the expected return of Dom Dwyer, and could be at full strength for the first time this season. That's good timing considering the Red Bulls could be resting several starters ahead of their CONCACAF Champions League semifinal against Chivas Guadalajara on Wednesday.

The MLS expansion class of 2017 renews acquaintances in Minneapolis as Minnesota United plays host to Atlanta United. The Loons are battling through injuries, and will be taking on a rested Atlanta side in a match that should see plenty of goals.

Here is a closer look at the key talking points for MLS Week 5:

MATCH OF THE WEEK: LA Galaxy vs. Los Angeles FC

Major League Soccer's newest team takes the ride down the 110 to take on cross-city rival LA Galaxy on Saturday for a mid-day kickoff that should feature plenty of sunshine and just as much star power.

LAFC enters with a perfect 2-0-0 record, but consecutive bye weeks have left Bob Bradley's men fighting off the cobwebs as they prepare for a derby they will actually be favored in even though they are the visitors. The Galaxy's recent rash of injuries has left big question marks about which of their stars will play on Saturday, but that hasn't taken anything away from a match that has been anticipated for a long time.

"You see it all over the world. When there are two teams in one city then you know it has the chance to be special," Bradley told Goal. "We know what it means to our supporters. They've been waiting for this game and the first one is going to be one people remember.

"On the team side, we still know that it's the first chance to step on the field in this derby and make a statement," Bradley said. "We take that responsibility seriously and we're looking forward to the match."

Saturday won't mark the first time two LA teams have met in MLS. Chivas USA spent a decade playing in the league, but the Goats were a largely unsuccessful team that never really got a foothold in the city.

"Chivas never probably achieved that full status of a rival, but this is definitely something that's there now [with LAFC]," Galaxy coach Sigi Schmid told Goal. "I think the front offices are competing against each other, the academy teams are already competing against each other, and now it's a chance for the first teams to go after it as well. I think it's good for the league, for the sport and it's great for the city of Los Angeles."

Bradley has first-hand experience in LA derbies, having coached Chivas USA in 2006, one of the team's few successful seasons.

"That year, as a coach, we understood that that game carried extra weight and so we were excited for those games," Bradley said. "That part of it is actually the same, and of course in time when Banc of California Stadium opens, and we can also have [the Galaxy] play in our stadium then everything will take on new heights, but for now it's still one city, two teams and a chance on the day to stand taller."

LAFC will look to continue its strong start to its inaugural season after opening with two victories. The Galaxy have dropped points in their past two matches, and are facing the prospect of being without Romain Alessandini and Giovani dos Santos on Saturday. Those potential absences could leave the Galaxy heading into Saturday as the underdog, but Schmid believes his team can deal with LAFC's high-flying attack.

"It's just a matter of us holding onto the ball when we have the ball," Schmid said. "They can't be dynamic if they don't have the ball. They're a team that's predicated on their speed up front. Those four guys go forward and the other six sort of keep their back safe in defense. They're not shy about letting you have the ball and looking for their chances to counter."

Both coaches expressed how much they are looking forward to the budding rivalry, even though LAFC's arrival has suddenly put the Galaxy in a position of having to defend bragging rights in a city where they have been king for more than two decades.

"It's a challenge, I think challenges are what we all live for," Schmid said. "Having a rival in the city is fantastic for the city because it forces each club to maintain a higher standard than if there was no rival, so having that rivalry is great."

Sacha Kljestan spent three seasons with the New York Red Bulls, and put up numbers that made him one of the top playmakers in MLS. That still wasn't enough to keep the Red Bulls from putting him on the market as they went searching for a younger, more expensive attacking midfield option.

Kljestan will face the Red Bulls on Saturday, marking the first time he takes them on since the trade that sent him to Florida and paved the way for the Red Bulls to sign Alejandro Romero Gamarra. Kljestan didn't sound like a bitter ex when discussing Saturday's meeting, but more like a player hungry to help his team reach the playoffs for the first time in its history.

"I want to get our first win, and even better if it can come against my former team,” Kljestan said. “It will be fun to see the guys again. I spent a few good years and have some very good relationships with those guys.

“You always want to win against your friends and your brothers," Kljestan added. "So I want to win this game very badly.”

Orlando City has yet to win a match this season, but with forward Dom Dwyer set to return from injury, and newly-acquired midfielder Uri Rosell closer to being fit enough to make his Lions debut, Orlando City should be closer to looking like the team that generated so much buzz after an impressive run of acquisitions this winter.

Carlos Vela vs. Jonathan dos Santos. These good friends and Mexican national team regulars will be key to Saturday's all-LA clash, though Dos Santos is nursing an injury that could give Vela the edge.

Sacha Kljestan vs. Tyler Adams. Kljestan will be more focused on helping Orlando win its first game of 2018 than on revenge. Adams will look to lock Kljestan down, assuming Jesse Marsch doesn't rest him for the CCL semifinals.

Michael Bradley vs. Albert Rusnak. Neutralizing Rusnak is the key to stifling RSL attack, and Bradley is more than capable of putting the shackles on him, unless Greg Vanney decides to rest him ahead of Tuesday's CCL semifinals.

Diego Valeri vs. Dax McCarty. The reigning MLS MVP continues to be the key to Portland's attack, and with Chicago's defense shaky these days, McCarty will have an even bigger responsibility to try and contain the Argentine playmaker.

Yamil Asad vs. Graham Zusi. Asad has been a consistent attacking threat since joining D.C. United, and he will keep Zusi busy defensively, which should ease some pressure off the D.C. defense.

Dom Dwyer vs. Tim Parker. A year ago these two were doing battle in the Western Conference, but they will meet again as East rivals if Dwyer can recover fully after missing the season's opening matches with an injury.

Ola Kamara vs. Laurent Ciman. Another good match-up that has changed conferences since last year, both Kamara and Ciman have enjoyed successful starts to life in LA, and their clash will be key in Saturday's intra-city showdown.

Gyasi Zardes vs. Kendall Waston. Few players are enjoying new surroundings more than Zardes, but the imposing Waston will look to make life difficult for him in the penalty area.

Miguel Almiron vs. Ibson. The Loons need possession to have any chance of holding off the high-flying Atlanta attack, and that will require Ibson to have a monster match in the middle.

Luciano Acosta vs. Ilie Sanchez. The often overlooked Sanchez is one of the league's best deep-lying midfielders, and if he can shield Acosta and keep him from creating, D.C. is in for a long day.

TORONTO FC 2, Real Salt Lake 0. A bye week should do TFC a world of good and though CONCACAF Champions League semifinals are looming, Greg Vanney will still put out a strong enough squad to record TFC's first MLS win of the year.

Orlando City 1, Red Bulls 1. Kljestan will be inspired to show up his old team and Dwyer's return should help, but the Red Bulls are playing well and even if Jesse Marsch sits regulars ahead of CCL, their bench is good enough to get a result.

CREW 2, Whitecaps 1. The Columbus attack has been a handful with Zardes leading the line, but look for Federico Higuain to star in a home win.

Galaxy 0, LAFC 2. The Galaxy's injury issues will leave them shorthanded, which is bad news against a dangerous LAFC side that should overwhelm the Galaxy defense.

Fire 2, Timbers 2. Matt Polster's injury has only made the FIre's suspect defense more shaky, but Portland's defense is also a work in progress so goals should fly in Bridgeview.

Minnesota United 1, ATLANTA UNITED 2. Having Francisco Calvo back will help the Loons defense, but it still won't be enough to stop Atlanta's high-flying attack, even at home.

Earthquakes 1, NYCFC 2. If David Villa is ready to return then NYCFC should coast to another win, but if the Spanish striker is out then Patrick Vieira's side could struggle to take all three points at Avaya Stadium.

DYNAMO 2, Revolution 0. Brad Friedel will try to emphasize improving the Revs' road form in 2018, but that turnaround isn't likely to happen at BBVA Compass Stadium, where the Dynamo are very tough. Alberth Elis should run wild against the New England defense.

SPORTING KC 3, D.C. United 1. The SKC attack has been rolling this season, and that should continue against a D.C. defense that has looked vulnerable in 2018.

Rapids 1, Union 1. The Union have been notoriously bad on the road for years, but Jim Curtin's squad should take a point in Colorado and could wind up with all three.

SOUNDERS 1, Impact 0. Brian Schmetzer's squad will be missing a laundry list of stars, including the suspended Clint Dempsey, but this is a match for Cristian Roldan to make his mark as a leader.