It could be the case that the constant chaos Roman Abramovich has wrought over his managers has been the catalyst for Chelsea’s long-term supremacy over Arsenal.

No Chelsea first-team coach has been permitted enough time – or influence – to shape the club his own way. Total control was not given to even Jose Mourinho and it is unlikely any manager at Stamford Bridge will get it.

Club director Marina Granovskaia and technical director Michael Emenalo makes the big decisions. They predate Antonio Conte and will probably be there long after him too.

At Chelsea, the coach is always the first one to take the blame when the team starts to malfunction. Conte is one of 10 men to have held the post since Abramovich first sunk some of his Russian mineral wealth into the club in 2003. Not one boss has lasted even 200 matches under him.

As well as Conte is doing right now, he will be under no illusions that he is still the most dispensable part of Abramovich’s structure. The owner has set Chelsea’s standards and any manager who fails to hit those standards is a goner. 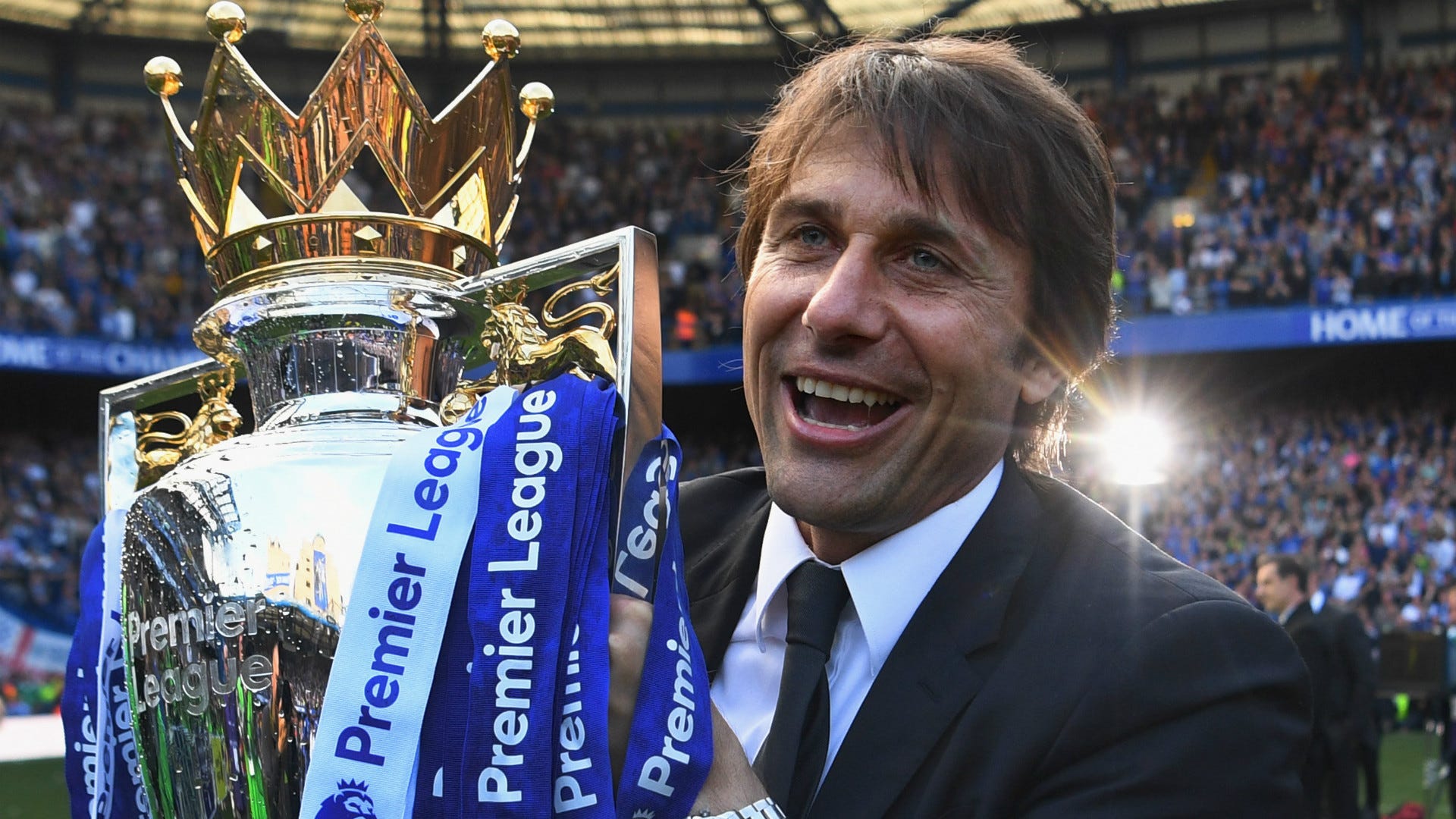 Chelsea might pay more in severance fees than many clubs pay in transfers but there is no doubting it works. They have been league champions five times under Abramovich, adding another four FA Cups and three League Cups to their domestic haul.

They have been winners one time apiece in the Champions League and Europa League.

Abramovich clearly values trophies above all else and his “permanent revolution” has proven to be an effective way of winning them.

Arsenal in that same period have been champions once – Abramovich’s first season – and have won three FA Cups. Since then, Wenger has overseen a generation-defining move to the Emirates Stadium and when Chelsea were spending money freely, Arsenal were instead frugal. Big players were sold to keep the whole show afloat and that badly damaged Arsenal’s competitiveness. 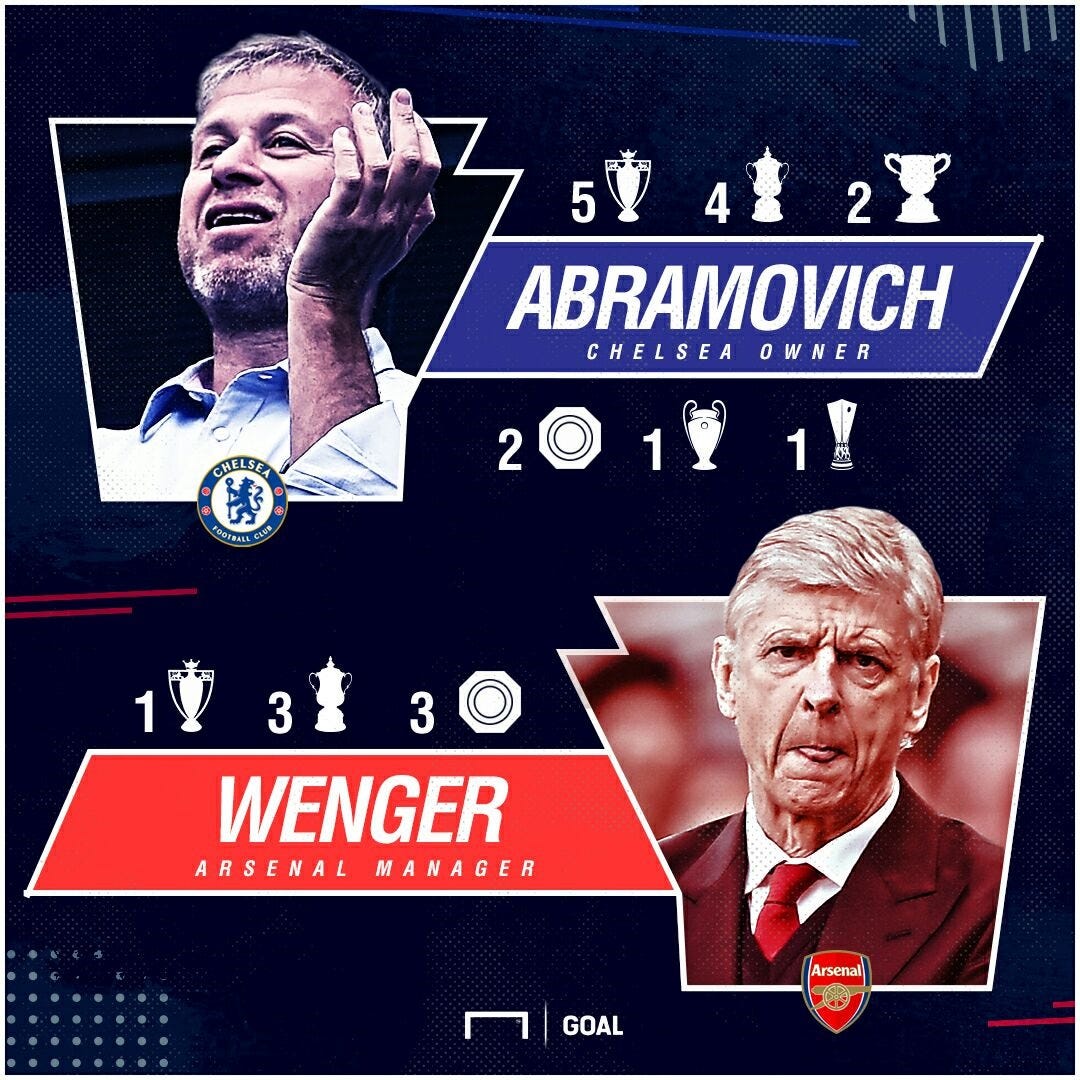 Somewhere along the way though being simply good enough on the field became good enough in the eyes of those off it.

Arsenal’s majority shareholder Stan Kroenke has a portfolio of mediocre sporting franchises including the Los Angeles Rams and Colorado Rapids.

There would appear to be little or no internal pressure on Wenger to win things. He is judged on keeping Arsenal buoyant season after season. Wenger is delivering to his shareholders’ expectations and in their eyes is probably doing a good job. Arsenal fans quite rightly have higher hopes but Wenger is not and will never be answerable to them.

He has done astonishingly well to keep their run of participation in the Champions League going until this season but they have been nowhere near competitive in the league or in Europe for a decade. 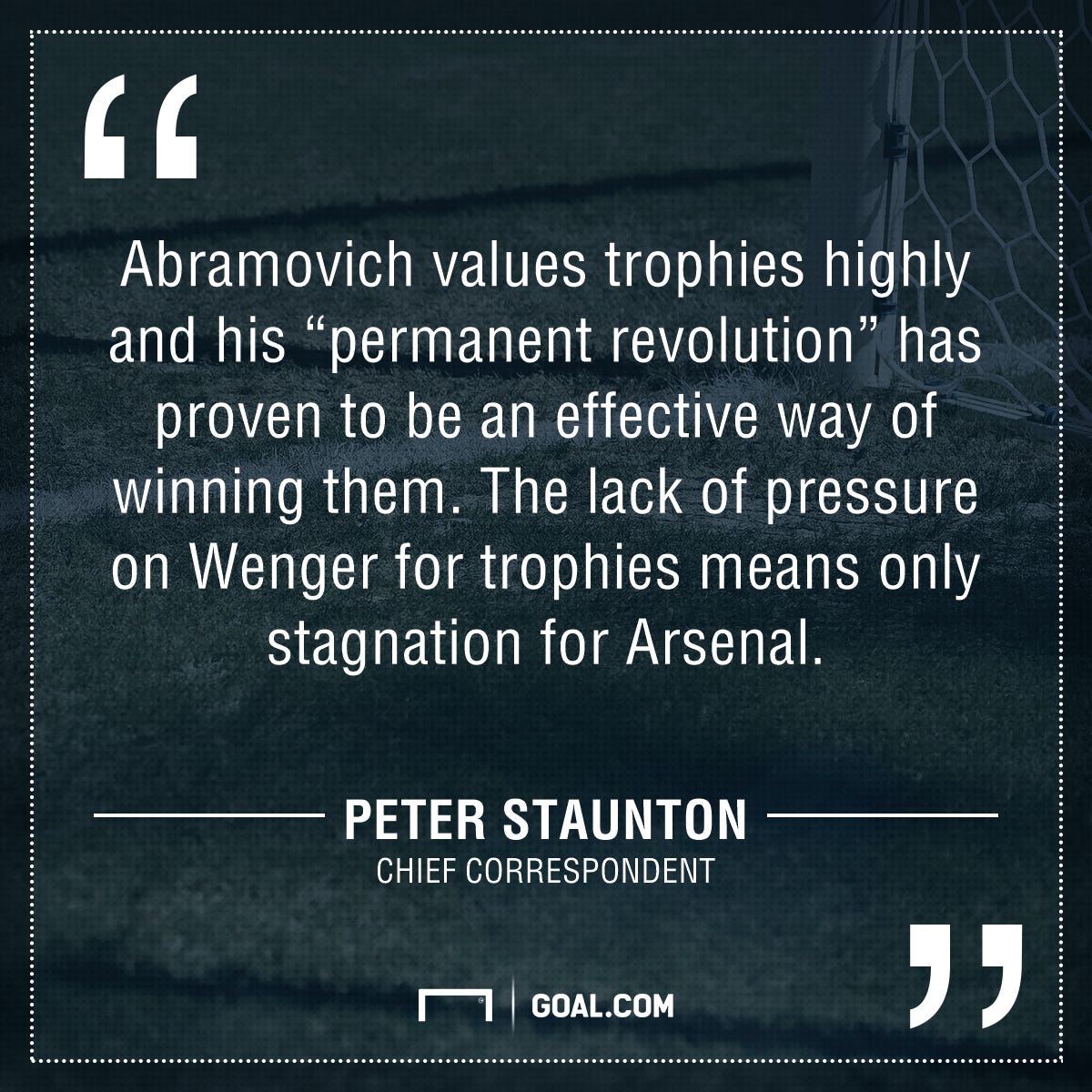 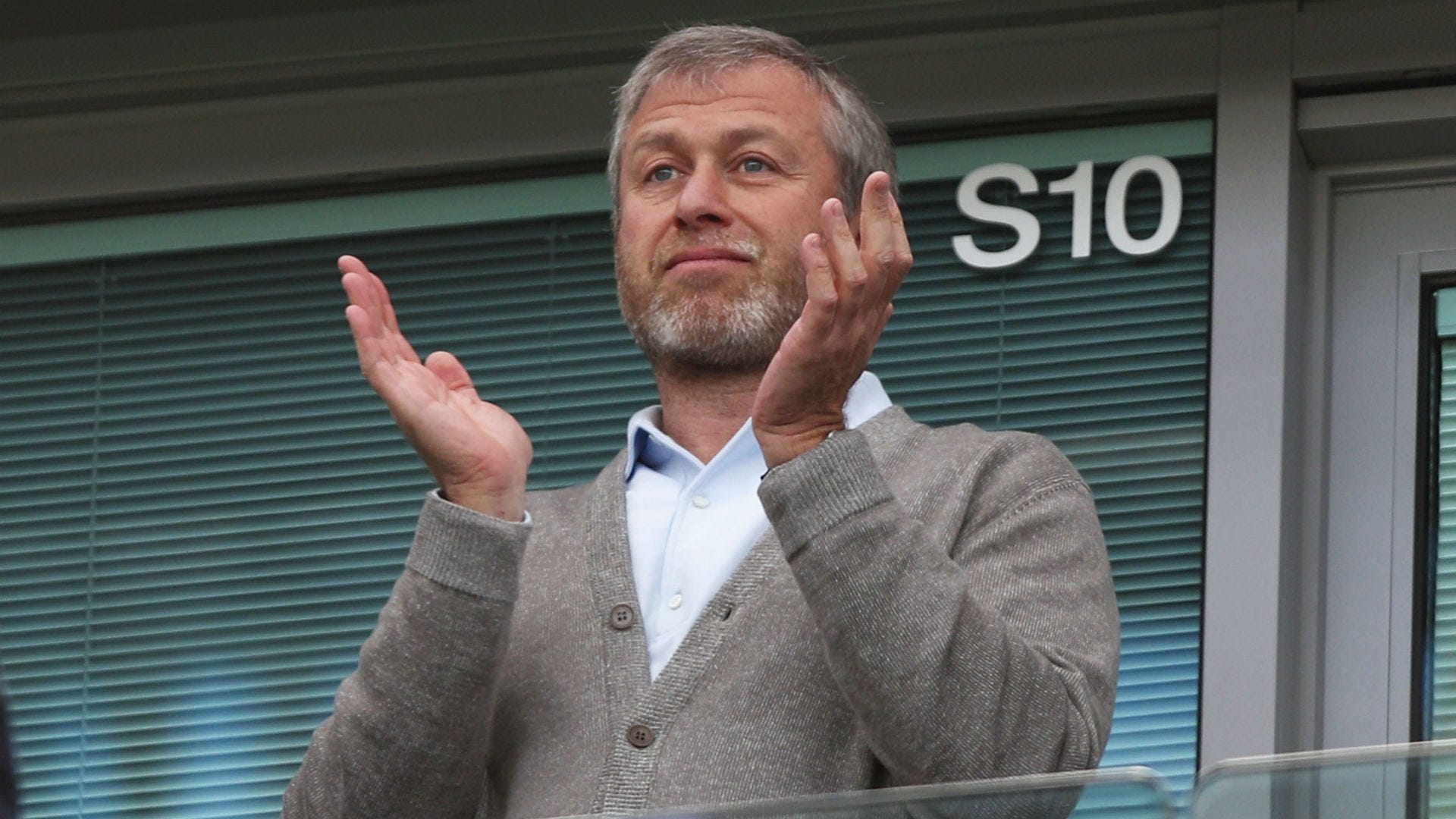 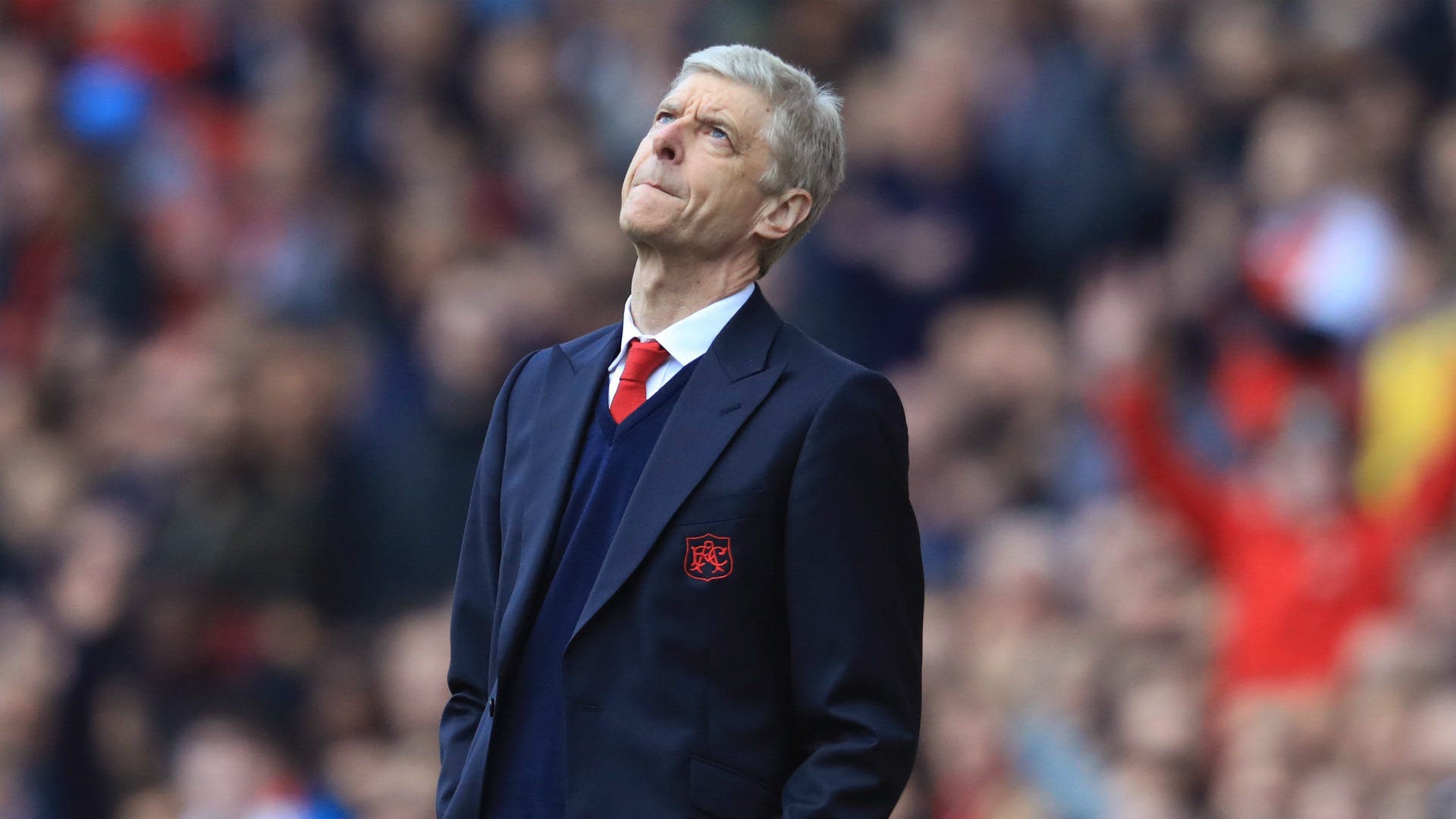 Wenger is one of the last managers to be given absolute power. Sources at the club say he’s got influence in everything from diet to the accounts, from statistics to scouting. He’s simply been allowed to get along with the job under Kroenke.

The competitive bar has been set lower at Arsenal than at Chelsea and this has brought Wenger plenty of breathing space. Kroenke is an owner who doesn’t appear to mind mediocrity so long as his bottom line is looked after.

Chelsea fans, meanwhile, are quite rightly in love with Conte right now but he would be fooling himself if he thought this would continue to be a cakewalk. A title once roughly every three years and a measure of European success is just about enough to keep a manager in employment.

That lack of pressure on Wenger for trophies means only stagnation at best for Arsenal and at worst it’s managed decline. The argument could be made that it’s good for the long-term health of the club to have an ethos and a philosophy on the playing side but Abramovich has been chopping and changing at Chelsea for 14 years and there is little sign of them slowing down.