With many attacking departures alongside the U.S. women's national team duo, and not many replacements, how will United cope in the new WSL season?

It was fitting that Tobin Heath’s move to Arsenal was announced on Friday, the same day that her former club, Manchester United, would kick off the new Women’s Super League season.

With United, who finished fourth last season, one point off a UEFA Women’s Champions League spot, losing seven players in the summer – five of them forwards – there is a lot of intrigue as to how they will look this year.

Meanwhile, Jess Sigsworth, who scored 17 goals to fire the club to promotion from the Championship two years ago, was snapped up by Leicester City, while Jane Ross moved to Rangers.

It was concerning, then, that the club only brought in one forward in the summer in response: Martha Thomas, from West Ham.

Is this team going to have goals? Does it have variety? Will it have enough to fire United into the European spots?

These were the questions being asked in the build-up to that opening game against Reading, who had beaten them earlier this year at Leigh Sports Village.

Marc Skinner’s first starting XI was intriguing. Thomas, the team’s only out-and-out striker, was on the bench. Instead, creative midfielder Ella Toone lined up as a false nine, with Leah Galton and Kirsty Hanson either side of her.

It proved a match-winning selection, as Toone racked up two assists in a 2-0 win.

For the first, she found a pocket of space in midfield, allowing Hanson to burst into the area she'd vacated. She picked up the ball, found the winger and it was 1-0. The second completed a great team goal, a nice one-two with Ona Batlle ending with the full-back rocketing a shot into the top corner.

Only two players who started Friday’s game had fewer touches than Toone’s 23. However, she completed 15 of her 18 passes and created three chances.

“I think it showed a lot of maturity from her to [play that role],” Skinner said after the game. “You'd always like your forwards on the ball. You'd always like them to get in gaps earlier. The first 10 minutes, I think you probably would have seen that more if we would have just composed ourselves and played through the lines quicker. But what it did do is cause Reading a lot of problems.

“If you noticed towards the end, Reading really couldn't get out of their half. We had a lot of control in the game. That was because we'd controlled the game from those spaces. We kept them compact, and then we could use the width from our full-backs. Tactically, I think we got that right. 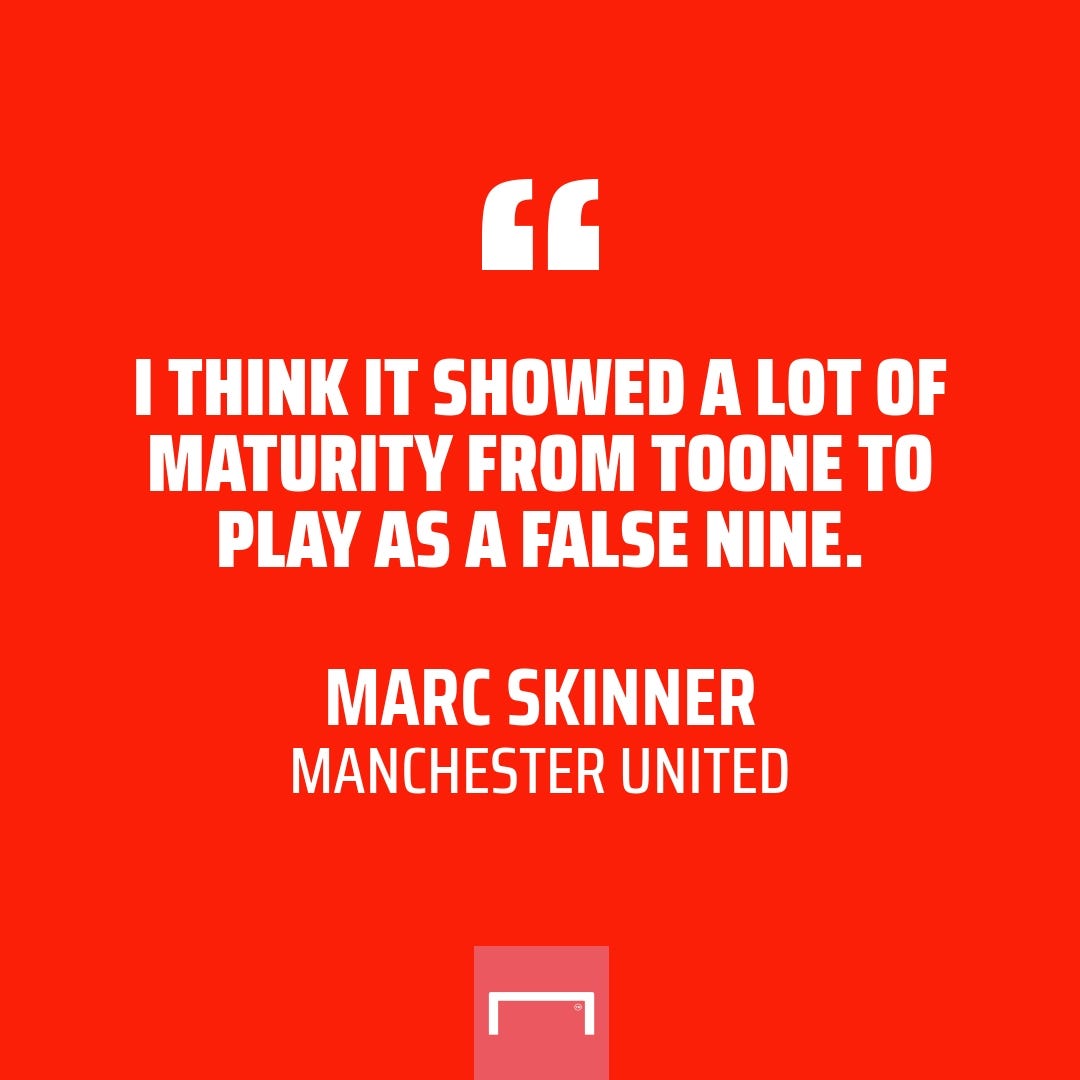 “What I don't want to be is predictable. I want our team to have the ability to interchange between that fluidity of shape. That's definitely the progression of the game of football, that actually your structures are what you start with, but what comes in between is an understanding of the connected nature of the players."

With fewer options in the attack this season, that unpredictability will be key. While they can’t rely on a World Cup winner like Heath to change a game, there is a lot of exciting young talent in this team, bursting with creativity.

Toone is just one example. There are a lot of different profiles, too.

Toone is a creative midfielder who can also operate in a front three. Hanson is a rapid winger with natural goal-scoring instincts. Galton has plenty of pace too, but offers goals in a more spectacular fashion. Thomas is a more traditional No.9.

Alessia Russo is slowly returning to fitness now, after missing a lot of last season through injury. She’s a quick forward who can play across the front line, such is the variety in her game and her ability with both feet.

There is also lots of excitement about the young duo of Ivana Fuso, who also had an injury-hit first year with the club, and Carrie Jones.

These options combined with a manager who likes variation makes for an interesting pair. While United had almost an embarrassment of riches up front last season, this year their lesser numbers in that department are strengthened by Skinner’s flexible approach.

"We've got to have the intelligent movement of the players that we have,” he explained. “We just have to have a different way of adapting.

"When Martha comes on, we can play a little bit more direct and use that kind of energy in behind the lines. I think we have to stay tactically adaptable and I've always asked my teams to be adaptable.”

So, what United lack in attacking options, their new coach can make up for with creativity and innovation.

And that tactical flexibility could go a long way in a season that promises to be as unpredictable as Skinner wants his team to be.