FIFA Ultimate Team turns 11 this month and to celebrate, there will be plenty of upgraded players and pack offers in FUT

FIFA Ultimate Team was launched in March 2009 and every year, EA Sports celebrates with a special promotion known as FUT Birthday.

FIFA 20 sees Ultimate Team turn 11 and will celebrate the event with the release of many special cards, packs, challenges and objectives.

What is FUT Birthday?

FUT Birthday is a two-week-long celebration to mark the anniversary of the first-ever FIFA Ultimate Team, back in FIFA 09. Initially, it was available as an add-on to the main game, but now FUT is the most popular mode in the game.

The first-ever FUT Birthday promotion took place in FIFA 14 and the event has been a key part of the FUT promotional calendar ever since.

To mark the occasion, EA Sports will release a special FUT Birthday squad as well as many other special edition cards and throwback players during the FUT Birthday fortnight.

When will FUT Birthday begin?

FUT Birthday began on Friday, March 27 and will continue for two weeks until Friday, April 4. It began around this date in every game from FIFA 14 to FIFA 19, with the exception of FIFA 18, where it was delayed until March 31.

It kicked off at 6pm GMT on Friday, March 27 and new items and challenges will be added every 24 hours for the duration of the FUT Birthday event.

Who is in the FUT Birthday squad?

Each year, a special FUT Birthday squad is released containing some of the most popular players from previous editions of the game. These are given upgraded stats as well as new positions. In FIFA 19, the biggest name was Antoine Griezmann, who was changed to right-wing, while EA Sports mixed things up with a left-back version of Mohamed Salah and a striker card for Virgil van Dijk.

Like this season's other promotions, the FUT Birthday squad will be released in two parts, with the first unveiled on Friday, March 27. Each squad will be available in packs for a week. 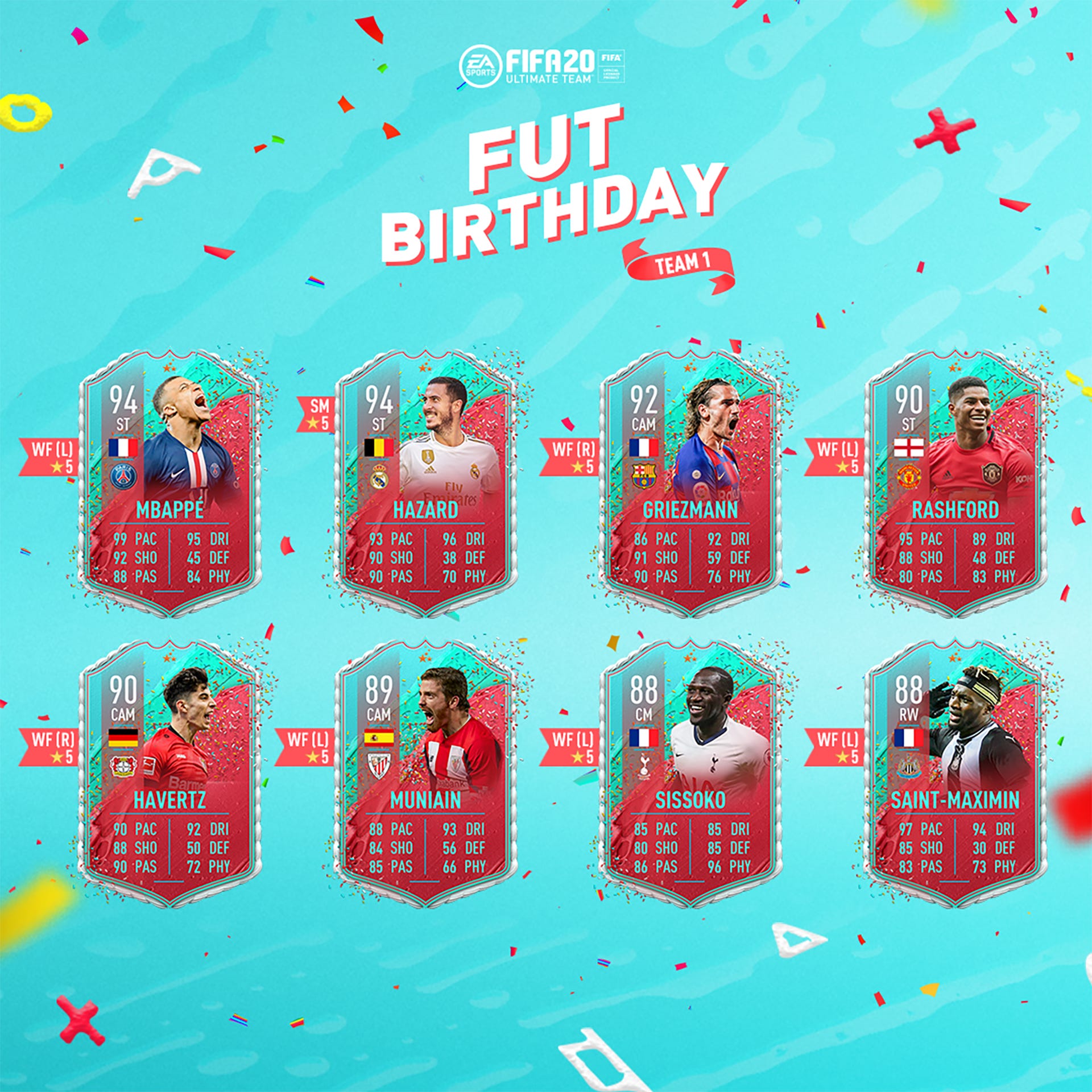 The second FUT Birthday squad was released on April 3 and will be available until April 10.

Will there be special offers during FUT Birthday?

Promotional packs will be available for limited periods during the FUT Birthday period. These will include special limited-availability offers where a small number of packs will be sold in the Store on a first come, first served basis.

Other special packs will be available for longer periods but will be limited to five or 10 packs per player.

In previous years, free untradeable packs were also given as a reward, with the pack type determined on the amount of days the player had logged in to FIFA or the companion apps.