With players like Man Utd's Lauren James and Man City's Lauren Hemp, the future is exciting for a team that has reached three successive semi-finals

When England finished third at the 2015 Women’s World Cup, it was an underdog story.

They had long produced talented footballers, but this was a country that had qualified for just three of the previous six tournaments, never making it past the first knockout round.

That has all changed significantly in the last six years. Semi-finalists at the European Championship in 2017 and the World Cup in 2019, the Lionesses are considered among the top teams in the international game.

The mentality has shifted too, with a major trophy now the stated aim.

The most encouraging thing, though, is how that progress promises to continue well beyond the days of Lucy Bronze, Fran Kirby and Nikita Parris, thanks to the steps being taken to build the next generation.

Lydia Bedford joined the Football Association (FA) in a full-time role back in 2014. The development she has seen has been huge.

“Before I got a role as a national head coach, there was only John Griffiths and Mo Marley, and they were covering multiple age groups. Now, we've got full time assistants and full-time head coaches at every age group,” she tells Goal.

“[That] helps us in terms of preparation. [It] just gives us more capacity to support work with clubs, get out and see players, build relationships. I think you feel like you can have a more meaningful impact on them.”

The growth of the coaching team has notably helped in the goalkeeping department, with England boasting an incredible new generation of shot-stoppers.

Twenty-year-old Hannah Hampton has been Birmingham's first-choice goalkeeper for the last three years, while Manchester City's 21-year-old Ellie Roebuck has been their No.1 for four years.

😳 @EllieRoebuck_ coming up with the magic stuff over in the @BarclaysFAWSL 🔥pic.twitter.com/J4smFUIavP

“There's some really strong historical work that's happening through some of our goalkeeping coaches, someone like Leanne Hall, that worked for the FA for a number of years, putting a lot of time into developing some of those goalkeepers to help them on their journey,” Bedford adds.

As well as the expansion of the coaching team, the FA has its regional talent centres playing in boys’ leagues at Under-10 and U12 levels. Many top female footballers around the world credit playing boys’ football as having a huge part in their development, such as Goal’s 2020 NXGN winner, Lena Oberdorf.

Work in other areas is key, too. Kay Cossington, the FA’s head of women's technical, has worked hard to align all the teams with the philosophy that England believe in.

“We've got a real passion in our pathway at the moment around dominating the ball more and trying to play through central areas of the pitch with way more confidence,” Bedford says. “I've already seen a remarkable change in the mentality of our players to try and execute that.”

That transition is aided by the general shift towards a more possession-based style of play throughout both the Women’s Super League and Women’s Championship.

“The positive for our players is that when it isn't [that similar philosophy], it's often because they're at the business end of the season and they need to produce something to get a result, which is equally a really valuable experience,” Bedford adds. 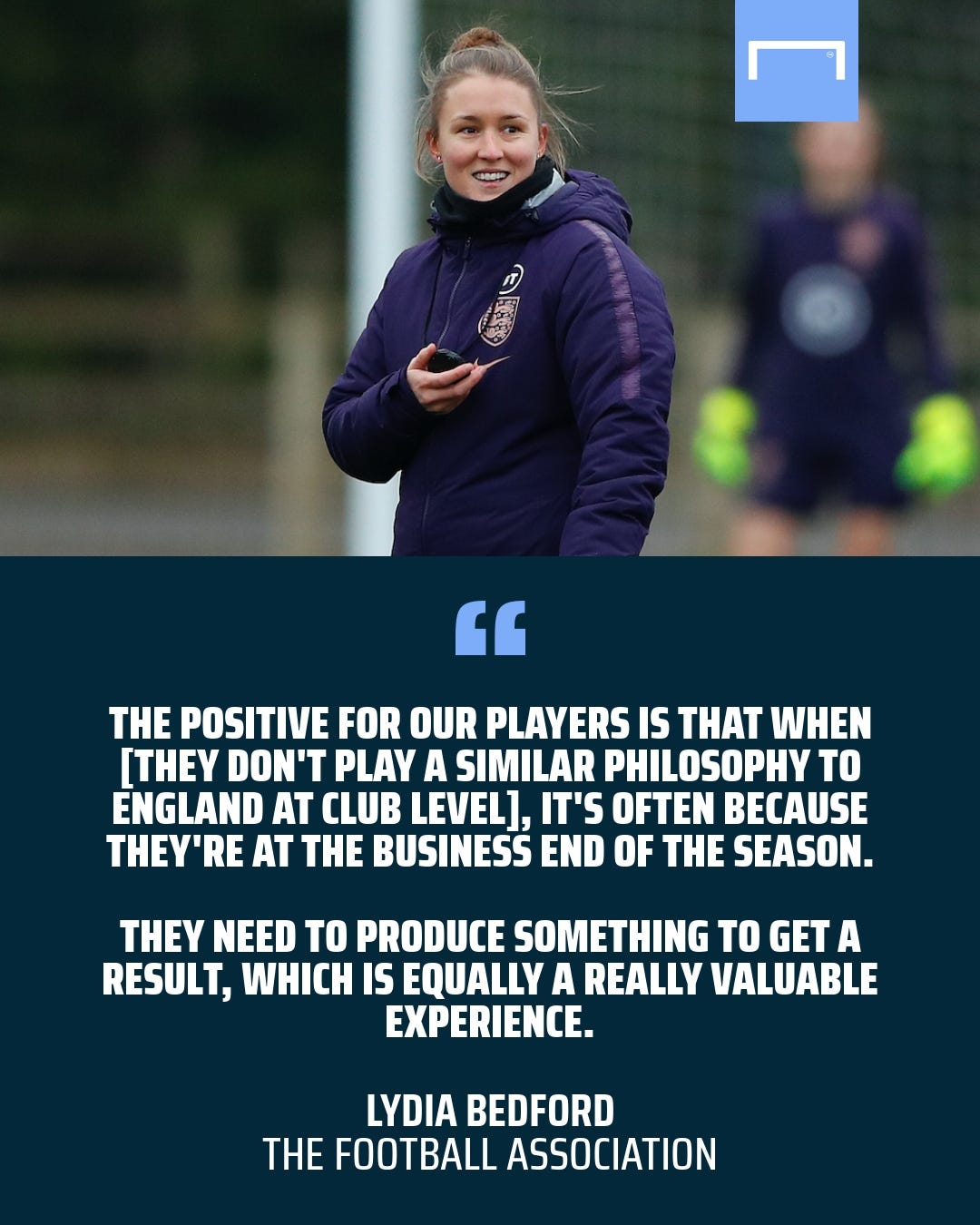 The number of players in the England youth teams getting those first-team minutes is evidence of how the FA’s development, as well as the development of club academies, is having an impact.

The nominations for the PFA awards this season emphasise the exciting future England has, with names like Lauren James, Ella Toone, Lauren Hemp, Ellie Roebuck and Chloe Kelly all recognised.

Meanwhile, players such Ruby Mace, the Arsenal youngster who has enjoyed a fantastic loan spell at Birmingham, Freya Gregory, who scored her first senior goal for Aston Villa in April, and Lucy Watson, Sheffield United’s electric teenage winger, are all among the younger England stars starting to make a name for themselves.

Like the homegrown rule that will come in from next season, the FA is looking at ways they can further develop their young players – but also their coaches.

Bedford is one of 14 participants in the first edition of the Coaches Excellence Initiative. The programme provides those involved with valuable learning opportunities, with regular one-to-one support from mentors, many not from a sporting background, among the most interesting aspects.

The FA has announced the launch of 'the Coaches Excellence Initiative', an 18-month programme created to develop high performance coaches working in the elite women's game. Some big names involved in the programme, whose abilities will be enhanced by their participation 👇 pic.twitter.com/tAzdYJ69YJ

“My mentor is not from a sporting background. She's from a hospitality background,” Bedford, whose passion for developing young talent comes from her background in teaching, explains. “She brings a completely different mindset to some of the things that I'll share with her.

“I’ve probably done all the qualifications now that I physically can, but when I saw this one, I felt like it would actually probably give me something different.”

The initiative is just another example of how the FA is trying to strive for better, build on the positive steps that England have made at senior level and ensure they continue to succeed throughout the system.

“I think what's probably really positive is that if you're a young girl these days, there's a real clear pathway for your journey. It's only Fara [Williams] retiring the other week that you realise how young some players were put into our seniors back in the day.

“That pathway is really powerful, and so is how at the forefront that is in terms of them being able to see it, because I think if you can see it, you can believe that it's there to be achieved.”