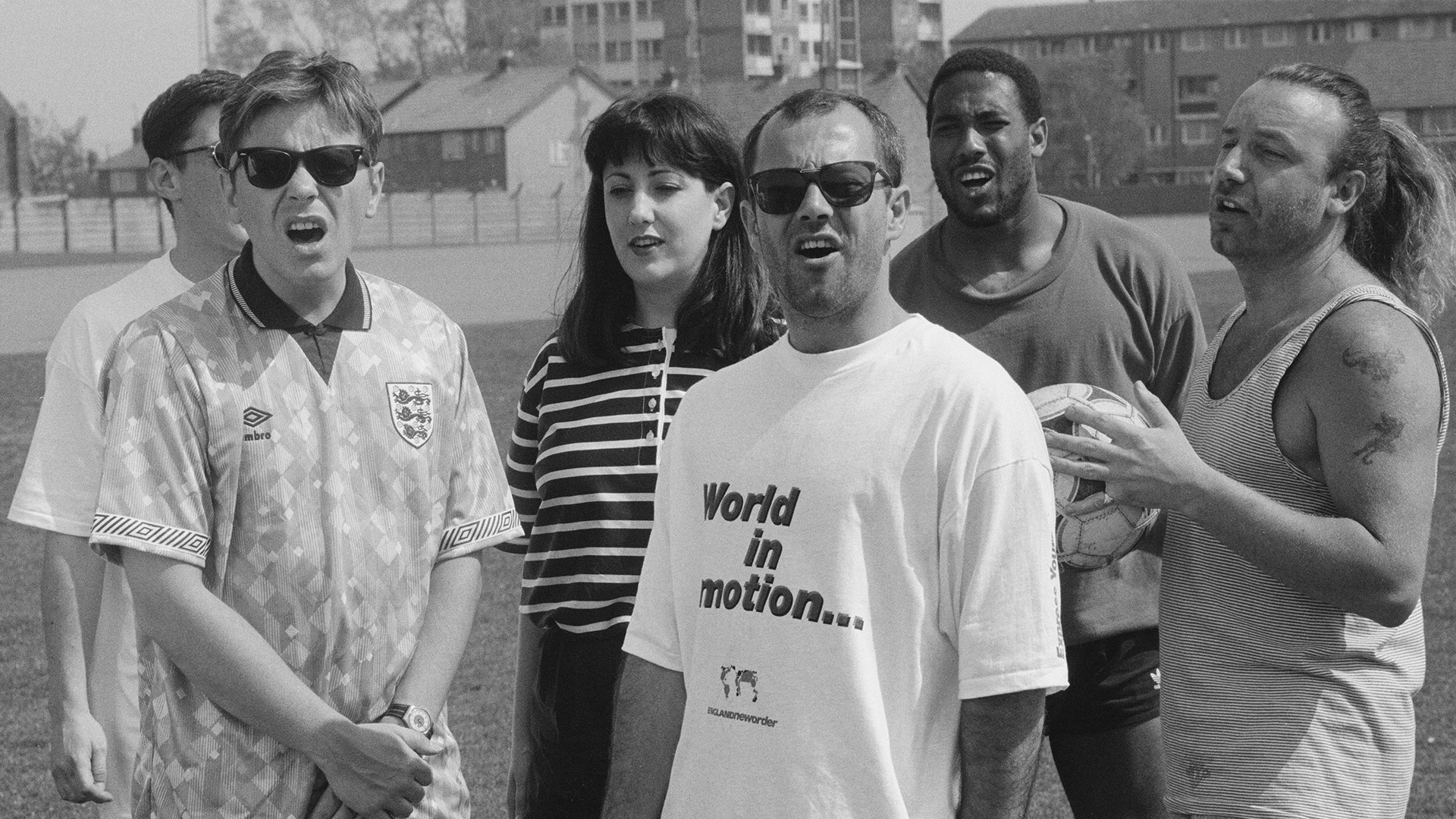 With the services of one of the nation's most popular bands enlisted, the song for the Three Lions' 1990 campaign was a big hit three decades ago

The fact that England did not have an official World Cup song for Russia 2018 was a bitter pill to swallow for some fans of the showpiece song tradition, but thankfully they were able soothe any lingering disappointment with a decidedly rich back catalogue of tournament tunes.

One of the most memorable England World Cup anthems was born in 1990 as the Three Lions were gearing up for Italia '90, with the familiar synth-pop tones of English band New Order providing an optimistic campaign soundtrack for Bobby Robson's team.

The song was called 'World in Motion' and it shot straight to the top of the UK Singles Chart following its release that summer, remaining there for two weeks in June before eventually being succeeded by Elton John's more downbeat love ballad 'Sacrifice' as the nation's mood shifted.

Written by New Order and comedian Keith Allen, the song famously featured a rap segment by England player John Barnes and a number of other players contributed vocals, while also appearing on the official music video.

Interestingly, while New Order boast classics such as 'True Faith' and 'Blue Monday' in their extensive discography, the World Cup song 'World in Motion' has the distinction of being their only UK number one.

'World in Motion' will inevitably evoke feelings of nostalgia for some generations. However, younger Three Lions devotees may not be au fait with it, so here's everything you need to know about the song.

Express yourself,
Create the space,
You know you can win,
Don't give up the chase.

Beat the man,
Take him on,
You never give up,
It's one on one.

Express yourself.
You can't be wrong
When something's good
It's never gone

Now is the time,
Let everyone see,
You never give up,
That's how it should be.

Don't get caught,
Make your own play,
Express yourself,
Don't give it away.

Express yourself,
You can't be wrong.
When something's good
It's never wrong.

You've got to hold and give
But do it at the right time.
You can be slow or fast
But you must get to the line.

They'll always hit you and hurt you,
Defend and attack.
There's only one way to beat them:
Get round the back.

Catch me if you can
'Cause I'm the England man
And what you're looking at
Is the master plan.

We ain't no hooligans,
This ain't a football song,
Three lions on my chest
I know we can't go wrong.

The official music video for 'World in Motion' featured a number of England players as well as clips of team in action during the World Cup 1990 qualification phase.

As one of the stars of the team - and the song - it was no surprise to see Barnes headlining the music video and the first image viewers were presented with was the midfielder spinning a ball on his finger. He appeared throughout, doing tricks in the background as lead vocalist Bernard Sumner - wearing a T-shirt with the words 'World in motion...' on it - sang.

The music video for New Order's 'World in Motion' can be watched in full above.

The genre of the World Cup song is known to stretch conventional musical boundaries and New Order did precisely that with 'World in Motion' by incorporating a rapping player into the composition.

Barnes, who had previously performed in the Liverpool's 1988 'Anfield Rap', won a mini-competition between a handful of England stars to earn the right to contribute a verse to the song, beating the likes of Gascoigne and Beardsley.

The lyrics to Barnes' World in Motion rap can be read below:

You've got to hold and give
But do it at the right time.
You can be slow or fast
But you must get to the line.

They'll always hit you and hurt you,
Defend and attack.
There's only one way to beat them
Get round the back.

Catch me if you can
'Cause I'm the England man
And what you're looking at
Is the master plan.

We ain't no hooligans,
This ain't a football song,
Three lions on my chest
I know we can't go wrong.

Despite contending with some ridicule for his rap, the former Liverpool man fully embraced the notoriety and has playfully tapped into his musical side in the years since.

In 2010, for example, he worked with chocolate bar manufacturer Mars for a TV advertisement ahead of that year's World Cup, in which he delivered a rendition of the rap.

"We did the song, and there wasn’t even supposed to be a rap," Barnes told Planet Football in 2020. "But a little bit of alcohol was taken and we were just about to have a few more drinks and Keith said, ‘Let’s write a rap.’ So it was just written there and then and the six players had a rap-off to decide who got the gig.

"We all had a go – Beardsley, Gazza, Des Walker and of course, myself. Des was probably the biggest competition, and Gazza might have been in with a shout, but I’m not sure the Scouse or Geordie accents really suited it! So, being a rap fan anyway, I was chosen."

How did England do at the tournament?

Unfortunately for England 'World in Motion' did not inspire them to glory, but they did manage to reach the semi-finals of the competition, where they lost on penalties to West Germany.

Robson's men topped Group F ahead of the Republic of Ireland, Netherlands and Egypt before navigating their way past Belgium and Cameroon in the round-of-16 and quarter-finals respectively.

However, the Three Lions endured what would become familiar penalty heartache when Stuart Pearce and Chris Waddle missed their spot kicks, allowing the Germans to win the shootout 4-3.

England ultimately finished fourth at the tournament after losing the third-place play-off game against tournament hosts Italy, while West Germany went on to lift the trophy, beating Argentina in the final.