Olivier Giroud ended the Iceland fairytale on Sunday as his Puma evoPOWERs sent Kolbeinn Sigthorsson and his Nike Tiempos home at the quarter-final stage of Euro 2016.

Giroud and Sigthorsson both came into the game with one goal each in the tournament so far but, while the Iceland star arrived a legend after scoring the most famous goal in his nation's history to eliminate England in the previous round, Giroud was still trying to win over the locals.

Just weeks ago, the Arsenal forward was booed by French fans who were disappointed by the absence of Real Madrid's Karim Benzema from the squad but, on Monday morning, Giroud woke up as hometown hero after his double inspired the hosts to a 5-2 victory in Paris.

Iceland had conceded just a single goal in each of their four previous outings at Euro 2016, their dogged, compact and cohesive displays ensuring that the tiny nation, competing in their first major international tournament, were far from whipping-boys.

The focal point to their approach on the counter, Sigthorsson had been vital to the success of a team who became first in history to name an unchanged starting XI in their opening five games of a Euro finals tournament. 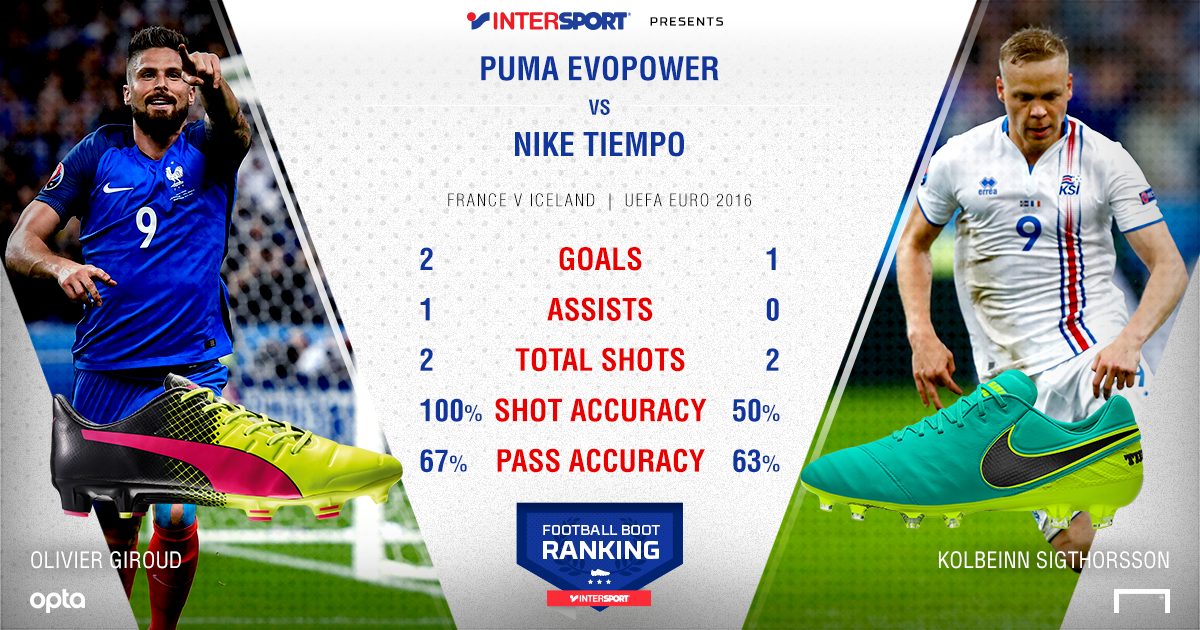 Franch coach Deschamps, meanwhile, had made a number of changes to both shape and personnel. Giroud needed a breakout night and he got off to a dream start after just 12 minutes, running in behind Iceland to slot a powerful finish though the legs of the goalkeeper.

The Arsenal striker had already scored one and made one to have the hosts 4-0 up by the time that Sigthorsson slid in at the near post to pull back an excellent Iceland consolation.

And Giroud ensured that he would have the last word by headinghome a fifth moments later to cap what he labelled perhaps his best ever performance for France.

Both players had two shots each but, while Sigthorsson squandered one, everything that Giroud and his evoPOWERs hit turned to gold.

But with two goals, Sigthorsson remains the highest-scoring of all those wearing the Tiempos in France this month.

As Euro 2016 races into the semi-finals this week, the Nike Mercurial currently leads the rankings overall thanks in no small part of tournament hero Dimitri Payet's three goals and seven assists managed by Belgian duo Eden Hazard and Kevin De Bruyne prior to their elimination.

The INTERSPORT Football Boot Ranking looks at which boots the game's biggest stars are wearing and links the data to statistics from competitions across Europe, and fans can track the progression of their favourite boots throughout the Euros by navigating the rankings online. Discover which football boot performs the best now.