In an exclusive interview with GOAL, Ben Lederman opens up on being released from La Masia after being banned by FIFA

For a player once described as an “American boy wonder”, Ben Lederman has no trace of the States in his accent now.

Indeed, when he speaks, he sounds closer to Krakow than his native Los Angeles.

"Everybody tells me that my accent doesn't sound American,” he says, speaking exclusively to GOAL. “But I haven't lived there for 11 years!"

Lederman has come a long way, both geographically and metaphorically, since being lauded by the American media as the future of the USMNT, and the next big thing from Barcelona’s academy.

A few years later, however, he left La Masia, having been caught in a tangled net of FIFA bureaucracy towards which he still holds a grudge.

Now, though, Lederman is back on the up, starring for ambitious Polish league runners-up Rakow Częstochowa as one of the top midfielders in the Ekstraklasa, and with an eye on international stardom – albeit not for the Stars and Stripes.

Back in the early days of his career, the future seemed very different.

He was spotted by Barcelona scouts when playing against one of their youth teams for California State Under-10s, and was invited to La Masia aged 11.

His whole family moved lock, stock and barrel to Barcelona to support Ben. Hailing from a Jewish family, he celebrated his bar mitzvah at a synagogue in the Spanish city.

By joining Barcelona, Lederman attained the honour of becoming the first ever American player to be registered with the club.

Social media was ablaze with talk of the wonderkid, with any clips and pics of his progress eagerly viewed and analysed. The New York Times profiled him when he was 13, describing him as "An American Boy Wonder in Barcelona" in their headline.

Lederman, however, was too busy enjoying his soccer to pay any attention to the hype. 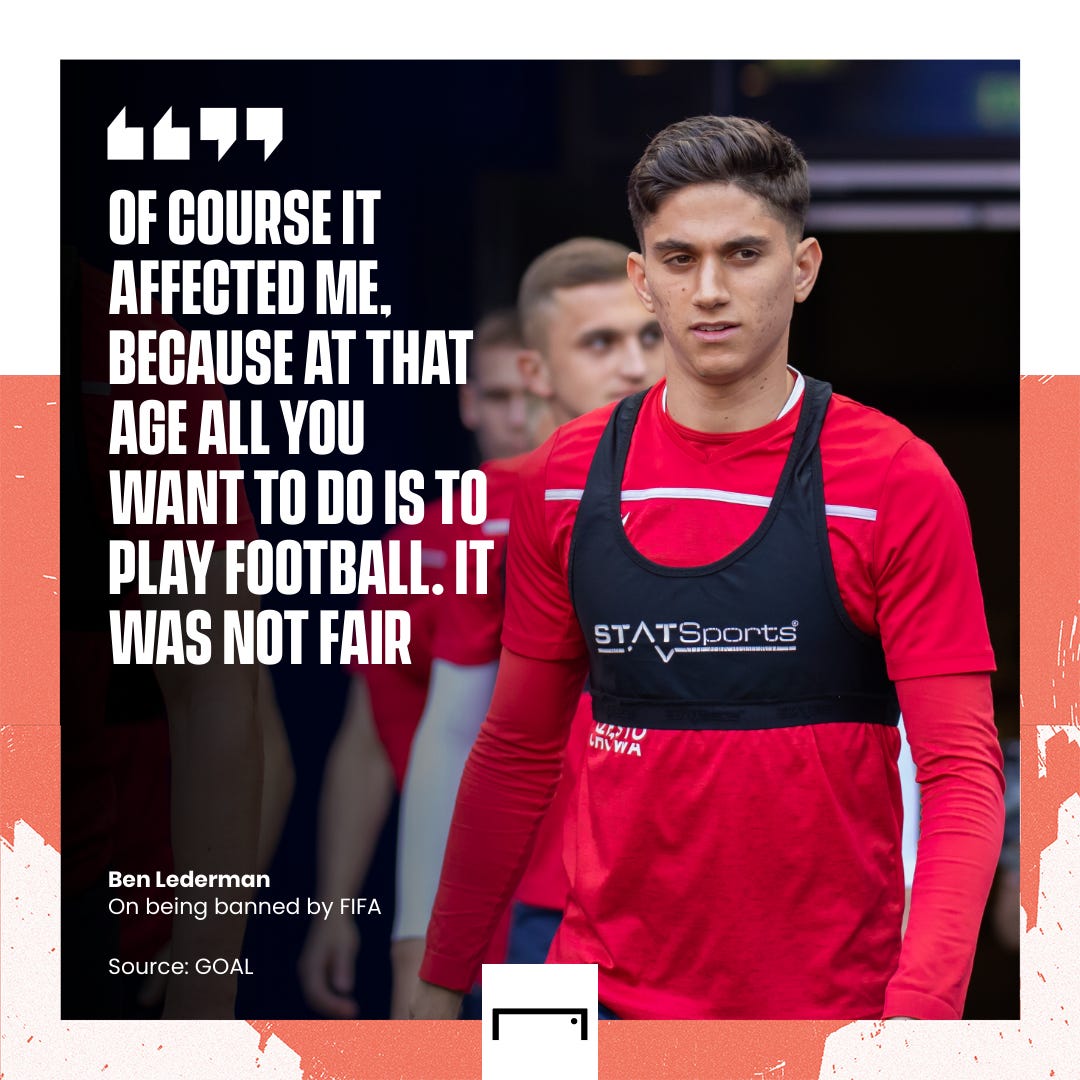 "It was like a dream come true,” he admits. “But at such a young age you don't pay attention to that sort of thing [media pressure], you go out and play every day and enjoy it. If you start reading these things, it's too much stress."

Less impressed by the move, however, was FIFA.

Article 19 of its regulations on the status and transfer of players prohibits youth players from registering with a club outside their home country until they are 18, unless they meet certain exceptions – which Lederman did not, and he, along with 10 other teenage players, was banned from competitive football in 2016.

"One day I went into training and the coach told me that Barca had got into a difficult situation with FIFA, and from now on I would be unable to play," he explains.

“They said it would be temporary, but they did not know how long I would be unable to play. He told me I could not play in official matches any more.

"Of course it affected me, because at that age all you want to do is to play football. It was not fair.”

Seeing his dream being slowly taken away in front of his eyes, for reasons beyond his control or understanding before he was legally old enough to drive or drink, had a crushing effect on the young Lederman – but it was something he has attempted to use to fire him in the rest of his career.

"It's a terrible thing to explain: sitting in the crowd at the weekend watching your team-mates play, and you have to sit it out, it's painful,” he says. “You have to be strong mentally, and I think I was and still am because of this.

"It was difficult at the time, but maybe everything happened for a reason, and it helped my career in a different way.”

He found some kinship with the other players who were banned, such as South Korean wonderkid Lee Seung-woo.

"There was an age difference, but we saw each other and we would talk about the situation and what happens next," he reveals.

"We were just training every day, waiting for the situation to get done, and it just wasn't."

Lederman's career was at a standstill. He missed out on the US squad for the 2017 Under-17 World Cup, before eventually getting a Polish passport, which allowed him to resume competitive action.

By this point, however, he was well down the pecking order for his age group, and in 2018, at the age of 18, he was released by Barcelona 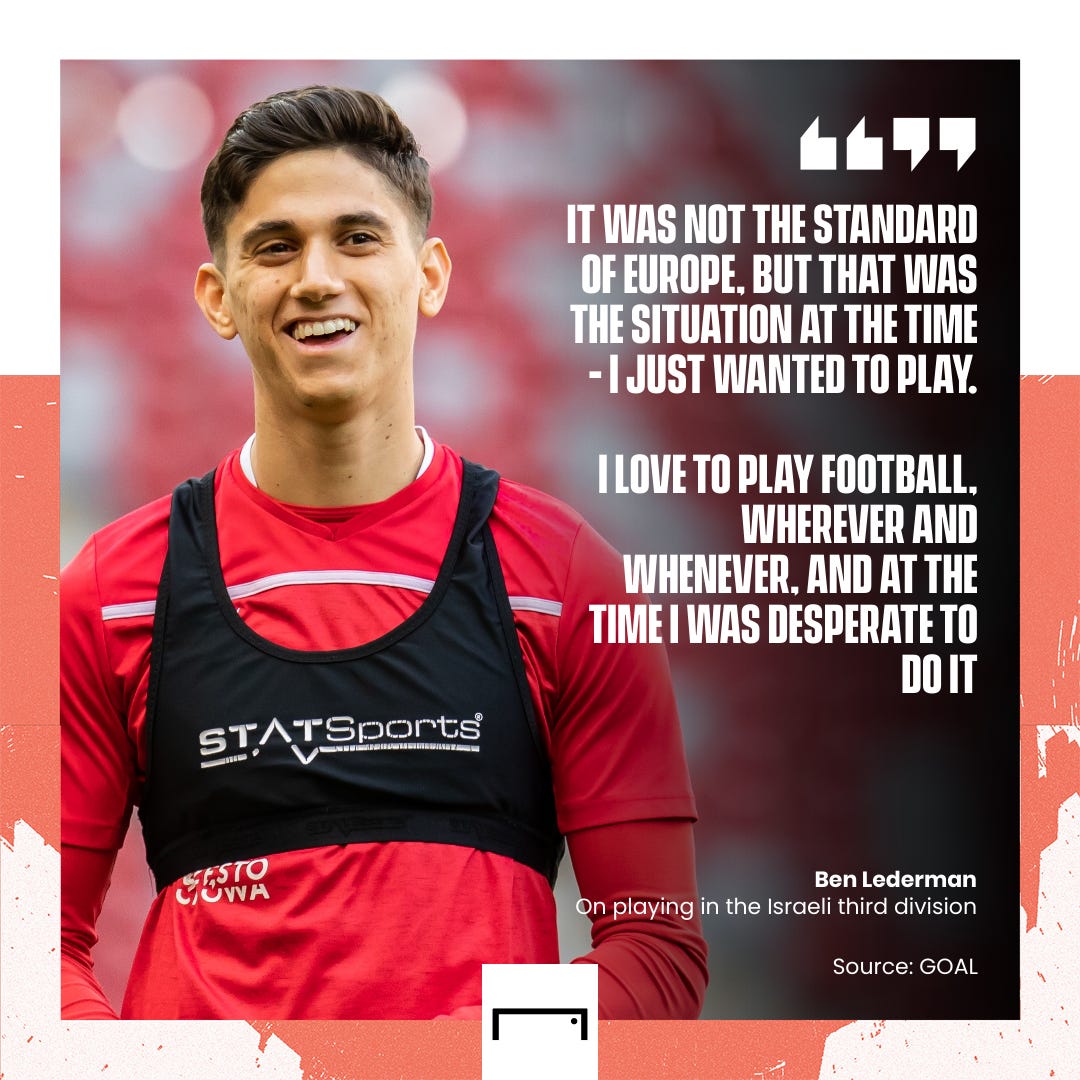 He says: "It was a tough situation, but that's football – you have to understand it and move forwards.

"Football gives a lot of circles: some days you can be at the top; the next at the bottom – it switches all around. But you can always make your way back up."

For a couple of years, it looked as if Lederman might drift from the game entirely. Two seasons on the youth books of Belgian side Genk did not lead to a professional deal, and he was left facing the footballing wilderness.

So, a young man who just seven years prior was being lauded in the pages of one of the world’s leading newspapers found himself in the Israeli third division.

Lederman signed a short-term contract with Hakoah Amidar Ramat Gan in the Liga Alef. He made one appearance for the club, on February 14, 2020, starting and playing 65 minutes of a 1-0 defeat to Maccabi Sha'arayim.

Lederman says of this detour: "It was a short period. My agent at the time was from Israel, so he told me to go and train with this club, it was just temporary, to play a few games and keep my rhythm.

"It was not the standard of Europe, but that was the situation at the time – I just wanted to play. I love to play football, wherever and whenever, and at the time I was desperate to do it."

Lederman’s agent came up trumps, with a move to unheralded Polish side Rakow. A modest platform, but one where his talent could shine.

There is a lot of Barcelona in the way he plays: a central midfielder who always seems to have time on the ball and the ability to make the right pass. There is steel to his game too, though: at 5'11'' he has aerial presence and is no shrinking violet in the tackle either.

Having never won a major trophy before, Rakow lifted the Polish Cup in 2020-21 and have come second in the Ekstraklasa in each of the last two campaigns. They led the league with three games to go in 2021-22, but let it slip to Lech Poznan at the final hurdle.

Lederman says of Rakow: "I signed a six-month contract, but after they liked what they saw, I signed for four years.

"The start wasn't easy, it was my first professional club, but with hard work and dedication I proved my worth to my team, and I am where I am because of that.

"I'm loving everything in Poland – except for the weather. We have a good coaching staff, a good team, and every season we are playing better and better.

"We have a very ambitious coach, we are an ambitious club, we want more and more every season. The results are coming, with a lot of hard work – we are the team that works the hardest in Poland."

So, should USMNT fans get excited again? No. Lederman accepted a call-up to a Poland U21s training camp in May 2021, and made his debut for his adopted nation in an U21s Euros qualifier against Germany in November.

"I like to focus on things and places where I am wanted,” he says bluntly when asked about the Poland v US choice. “Poland wanted me more.

“The USA have never even contacted me in the last few years. Of course it was tough, but I felt more wanted and that in the end made it easy."

Lederman is now targeting the top of the game for both club and country. Rakow will play in the Europa Conference League next season (only the Polish Ekstraklasa winners go into the Champions League), so that is one next step.

The other, though, is getting to a World Cup. Qatar 2022 may be too soon, but Lederman may well be eyeing 2026, co-hosted by his birth nation.

American fans may finally get a look at their boy wonder – in the colours of Poland. And what would they see, if Lederman was to sum up his career so far?

"There have definitely been a lot of ups and downs in my career," he says, "and I'm still not where I want to be, but I'm on the right track."