Rome has never been easy to conquer. Indeed, Rudi Garcia once pointed out that the city has only ever had three kings: the Pope, the notorious crime boss 'Libanese' and Francesco Totti. Jose Mourinho, though, is perfectly placed to become the fourth.

In the space of a year, he has whipped the red half of the city into a frenzy. His first season back in Serie A was characterised by a succession of ugly attacks on officials and opponents, but also obvious on-field progression, culminating in the club winning its first major European trophy.

It may have only been the newly formed Europa Conference League but it meant a lot to Mourinho – he was reduced to tears after their semi-final second-leg win over Leicester City and even commemorated their subsequent triumph in Tirana with a new tattoo.

The 1-0 victory over Feyenoord meant even more to the supporters, though. They'd suffered a lot since last winning the Scudetto, in 2001, enduring one near-miss after another, both in Serie A and continental competition.

Which is precisely why they greeted Mourinho like a Messiah, with hundreds of supporters turning out to greet him when he sensationally arrived in Rome last summer.

Nobody had expected to come. Nobody had even known that he was a contender to replace the outgoing Paulo Fonseca as coach. The appointment of 'The Special One', then, caused what former Roma director Walter Sabatini described as an "emotional earthquake" in the Italian capital.

Paolo Di Canio's phone blew up, the Lazio legend inundated with messages from all of his Roma-supporting friends, who were overjoyed by the news. Di Canio, though, was dismissive, responding to one message by labelling Mourinho as "finished" and "the worst of the worst".

The thing is, though, Mourinho's methods are working again in Rome. He's once again revelling in the underdog role which has always suited him so well.

As former Portugal midfielder Adrien Silva told GOAL, "It's surprising in one sense, because Roma was having a very difficult time before he arrived. They were nowhere near the same level as their main rivals in Italy but now they're getting closer and closer under him.

"But, on the other hand, it's not that surprising that they're now doing well because it's Jose Mourinho! And he's shown at so many clubs during this career that he's one of the best managers in the world.

"It just goes to show you that sometimes you just need the right manager at the right time for things to click."

And Mourinho and Roma look like a match made in heaven. Given the strength of the squad that had finished seventh the season before, expectations were low going into the 2021-22 campaign and with good cause.

There were plenty of dark days and Mourinho's frustration was obvious at regular intervals. He said he'd matured, both as a coach and a man, but he started taking shots at old adversaries in his very first press conference, and never really relented as the season wore on.

His primary target may have been referees but he was heavily involved in a very ugly and protracted spat with the coaching staff of Conference League opponents Bodo-Glimt.

However, Mourinho made excellent use of his tried-and-trusted siege-mentality approach. After ruthlessly discarding the players he had no need for at the start of the season, he succeeded in bringing the dressing together.

The fans, of course, had been behind him from the start. A mural of Mourinho on a Vespa appeared in the Testaccio quarter of Rome just days after his arrival. 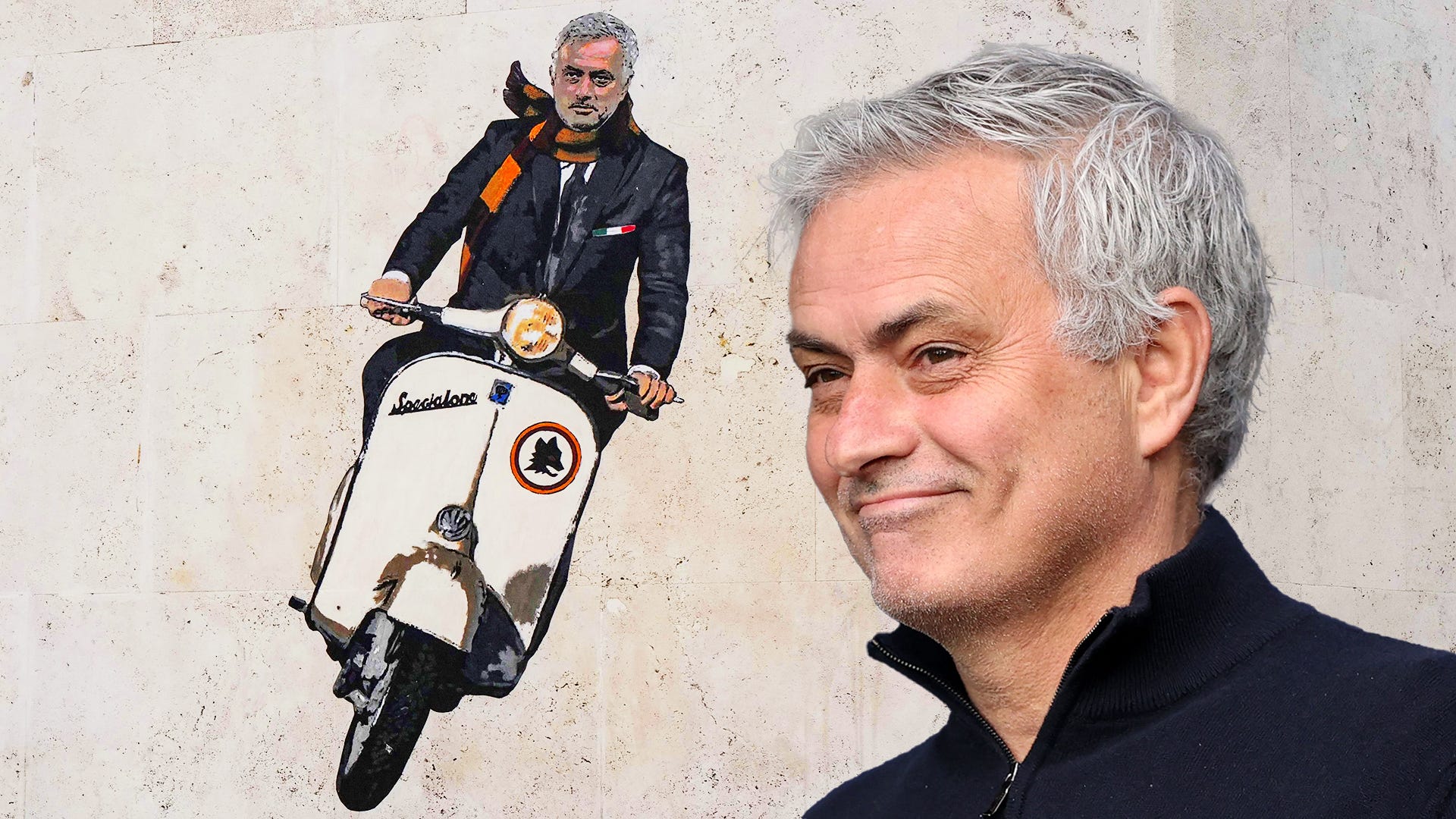 The net result was the creation of "a sense of family" that carried an average squad all the way to victory in the Conference League.

The question now is whether Mourinho can now build on this seemingly unstoppable sense of momentum building in Rome.

Fabio Capello, the man behind the 2000-01 title triumph, is among those expecting Roma to at least challenge for the top four places this season.

However, as the coaching legend recently pointed out, "The risk in Rome remains the same: too much euphoria."

That ship has already sailed, though. The Conference League success, coupled with a positive transfer market, has seen the fans swept away by a wave of optimism.

The images from Paulo Dybala's presentation have long since gone viral, with the former Juventus striker having been left dumbstruck by the reception he received at the Palazzo della Civilta' Italiana.

He was left lost for words again last week, just giving a little nod of approval instead as a sold-out crowd of 65,000 Roma fans gave a rousing rendition of the club anthem before the pre-season friendly with Shakhtar Donetsk.

And the thing is, what happened afterwards perfectly illustrates why the supporters are so fired up.

Dybala, Tammy Abraham, Lorenzo Pellegrini and Nicolo Zaniolo – 'The Fantastic Four' as they have already been christened – combined in thrilling fashion for the opening goal in a 5-0 win that suggests that Mourinho is now in possession of a team capable of doing serious damage in Serie A this season.

"Jose is a winner," Capello told the Gazzetta dello Sport, "and he's shown that again at Roma. Now, he has a team befitting his expectations, and he is perfect in the management of a good group. He will not have any problems."

Certainly, Nemanja Matic and Gigi Wijnaldum will bring some much-needed experience and stability to the midfield, while the return to full fitness of Italy's buccaneering wing-back Leonardo Spinazzola is a massive boost.

However, doubts remain over whether this is really a squad capable of sustaining a title challenge.

Improvements have undeniably been made to a panel coming off a sixth-placed finish in Serie A but there is still a worrying lack of depth, particularly in central defence, and Dybala's recent fitness issues are a legitimate cause for concern.

It also remains to be seen how much Matic and Wijnaldum have left in the tank, given their recent struggles at Manchester United and Paris Saint-Germain, respectively.

Furthermore, Roma fans will not rest easy until the transfer window closes, given the continuing speculation surrounding Nicolo Zaniolo, who has been linked with both Juventus and Spurs all summer long.

However, opportunity undoubtedly knocks for Roma.

In Rome we welcome people differently... 🔥

These are troubling times for Italian football. The summer transfer window has once again hammered home the painful point that Serie A's finest can no longer compete with their Premier League counterparts for the game's very top players.

Prudence is imperative but not necessarily detrimental to astute squad-building and Roma, thanks to impressive management of their American owners, the Friedkin Group, have proven that it's still possible to strengthen without splashing the cash.

Indeed, with two weeks to go until deadline day, the Giallorossi have paid a transfer fee for just one player, Zeki Celik, and even that was only €7 million (£6m/$7.2m). Dybala, Wijnaldum, Matic and Mile Svilar all arrived on frees.

Meanwhile, Roma's main title rivals, Milan, Inter and Juventus, have all endured mixed transfer windows and are experiencing nothing quite like the level of buzz.

Is the positivity misplaced? Possibly. With their shrewd signings, Roma have probably closed the gap to the 'Big Three' but probably not enough to consider them potential title winners.

And Capello is correct when he says that excessive euphoria has always been an issue for one of the biggest but most unstable clubs in Serie A. Things can quickly turn sour in the capital.

However, the energy being generated at the Olimpico right now is impressive and could well power the team to a top-four finish.

And move Mourinho one step closer to being crowned the fourth king of Rome.