The 19-year-old has been linked with both Manchester City and Wolves after an eye-catching first season in the Velez Sarsfield first team.

"There is a boy in the academy team who is spectacular," said then-Velez Sarsfield manager, Gabriel Heinze, when discussing potential stars of the future back in 2020.

"I don't want to promote him quite yet because he is still very young, but it was a difficult decision to make."

The player Heinze was talking about was Maximo Perrone, a 17-year-old midfielder who had begun making an impact within the youth ranks.

It would not be for another two years and with Heinze having left, however, that Perrone would finally get his chance to impress at first-team level, and he has wasted little time in making an impact.

Now 19, Perrone has emerged as one of the best young prospects in Argentine football, with his performances both domestically and in continental football having caught the eye of a number of European scouts.

Comparisons have been made to Frenkie de Jong and Federico Valverde, among others, for the way he is able to provide in the final third despite playing as a deep-lying midfielder.

But while Perrone has always had plenty of talent, it took him time to become the potential superstar that Velez fans are enjoying this season.

Perrone was first spotted by Velez's scouts as a six-year-old, but he could not be enrolled into the club's academy due to them not having a team young enough for him to enter. Instead, he agreed to join once he was old enough, and continued his early football education at local clubs in the Villa Devoto area of Buenos Aires.

When he eventually joined the Velez ranks, Perrone played as either a winger or striker, before trying his hand at full-back before settling as a wide midfielder.

Perrone, though, was struggling for starts in his new position, and it required an intervention from his Under-13s coach, Cristian Gomez, to force him to try and develop as part of a double-pivot at the heart of midfield. Perrone has never looked back.

Perrone made his unofficial debut for the club against River Plate in a pre-season friendly in February 2022, and impressed so much that he has barely been out of the starting line up ever since.

Early comparisons were made to ex-Real Madrid and Argentina midfielder Fernando Redondo, while others believe he is the heir at both club and international level to ex-Velez star Fernando Gago, who recently retired. 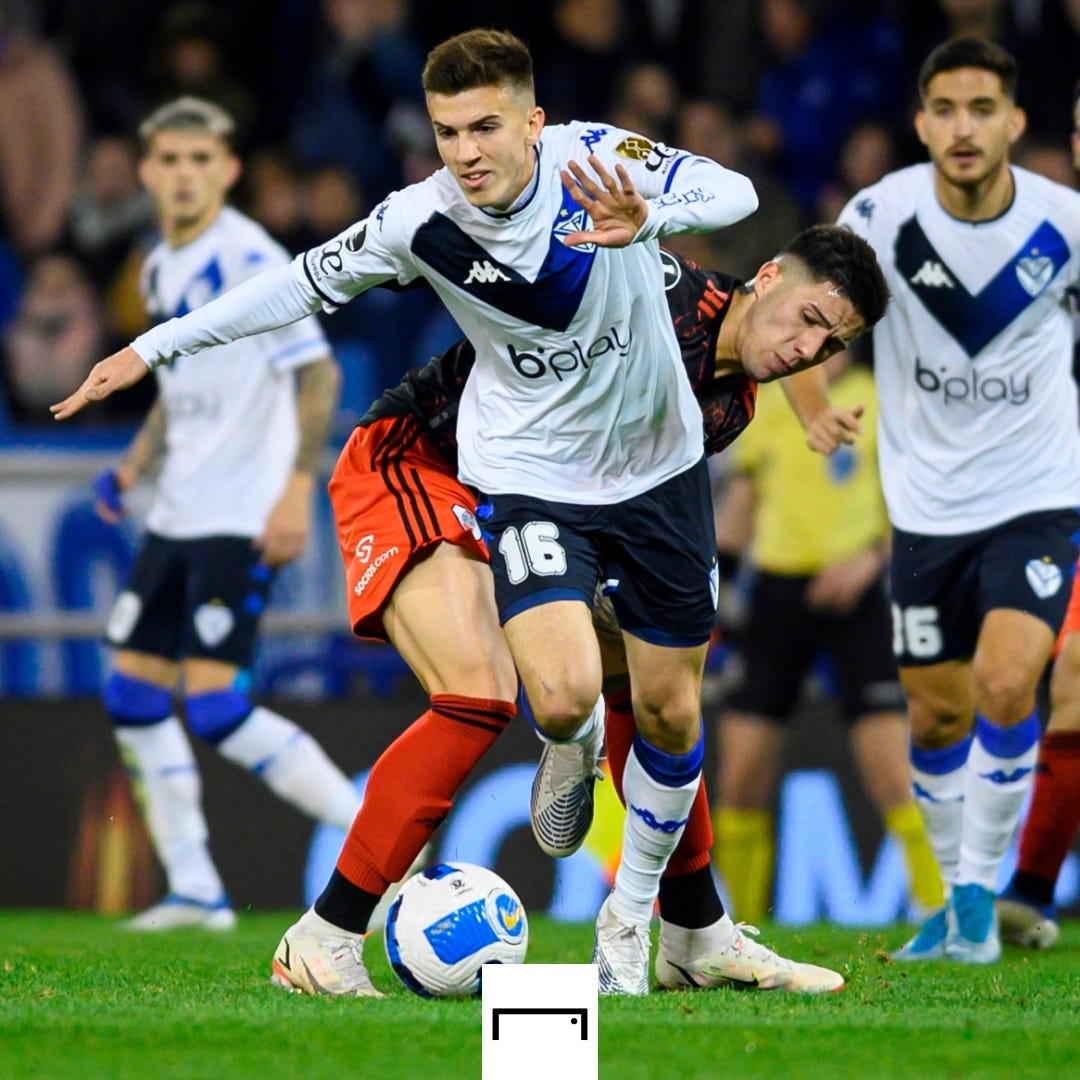 Tall, left-footed and able to combine positional intelligence and tough tackling with extreme comfort when in possession, Perrone is every bit the modern-day midfielder, while his past life as a forward player means that he has also been able to chip in with some key goals over the course of the campaign.

No more so was that true than in Velez's surprise run to the Copa Libertadores semi-finals – a journey that was sparked by a dramatic intervention from the club's star teenage midfielder.

Having failed to win any of their opening four group matches, Velez were staring elimination in the face as they entered stoppage time against Nacional level at 2-2, only for Perrone to pop up at the back post in the 94th minute to head home, capping an already impressive display with his first professional goal.

He backed that up with an assist against Estudiantes in the victory that sealed Velez's progression to the knockout stages, before being singled out for the way he was able to control both legs of their last-16 win over River Plate.

Perrone was key once again in the quarter-finals, providing an assist in stoppage time for fellow teenager Julian Fernandez to score the winner in their first-leg win over Talleres, only for disappointment to strike on the eve of the semi-finals.

Just days before Velez were due to face off against Brazilian giants Flamengo, Perrone was diagnosed with a punctured lung, ruling him out of action for a month and meaning that he could only watch on as his team-mates were thrashed 6-1 on aggregate in the final four.

Perrone is due back soon, and Velez certainly need him as they look to stave off relegation after a season that has seen them win just two of their 20 league matches thus far.

Dropping out of the top-flight would certainly hasten Perrone's inevitable departure from his boyhood club. Manchester City were credited with interest earlier in the year, while Wolves were heavily linked with the teenager during the European summer transfer window.

Expect the latest Argentine wonderkid to arrive in Europe sooner rather than later, then. It might have taken a couple of years since Heinze's "spectacular" claims, but Perrone is definitely living up the billing now.