Real Madrid have completed the signing of Chelsea defender Antonio Rudiger, it has been confirmed.

The centre-back’s contract at Stamford Bridge is set to expire on June 30, and he rejected the Blues’ efforts to tie him to a new deal.

Instead, Rudiger has opted to make the move to the European and Spanish champions, becoming the first signing of the summer for Carlo Ancelotti.

What is Rudiger's salary and contract length at Real Madrid?

Madrid have confirmed that Rudiger has penned a four-year deal at Santiago Bernabeu, tying him down to Los Blancos through until the summer of 2026.

Reports suggest he is set to earn around £150,000-a-week in terms of salary, as well as a hefty signing-on fee after opting to join Madrid despite competition from Paris Saint-Germain, Barcelona and Bayern Munich.

Rudiger 'super excited' to get started at Madrid

Posting to his Twitter account shortly after his transfer was announced by both clubs on Thursday, Rudiger said: "I'm proud to announce that I'll be joining [Real Madrid].

"I'm super excited for all the challenges ahead and can't wait to play my first games for this huge club."

Rudiger will be presented to the media in Madrid on Monday June 20, at his official unveiling.

Real Madrid have signed one of the best centre-backs in the world as a free agent, continuing their good recent run of picking up world-class players without having to pay a transfer fee.

His arrival will also allow the versatile Alaba to be deployed at left-back in games when opposing teams play more defensively, giving Ancelotti more options than he had during his first season back at the club.

Rudiger will not be easy to replace at Chelsea

Rudiger was arguably Chelsea's Player of the Season in 2021-22, so his departure from Stamford Bridge is a huge loss.

That goes beyond just his performance on the pitch, too, with Rudiger being a much loved member of the dressing room and a leader to his fellow players.

This club will always remain special to me 💙 Thank you, @ChelseaFC 💯🙏🏾 #Hustle #AlwaysBelieve pic.twitter.com/qQb1DkfecR

The fact that he is probably worth over £50 million ($63m) on the transfer market highlights how losing him on a free is such bad business for the Blues, particularly as their new ownership group get their feet under the table.

Overall, it is sad day for the Blues to see Rudiger depart, and replacing him will be a costly exercise. Chelsea will have a plan for coping, but any big-money signing will need time to adapt to a new club and league.

How will Real Madrid line up with Rudiger?

Rudiger should slot seamlessly into the Madrid defence, likely playing as the left-sided centre-back in Ancelotti's favoured back four.

Who he partners, however, may depend on the type of opponent Madrid are playing, with Alaba an option to be moved to left-back against more defensive opponents. 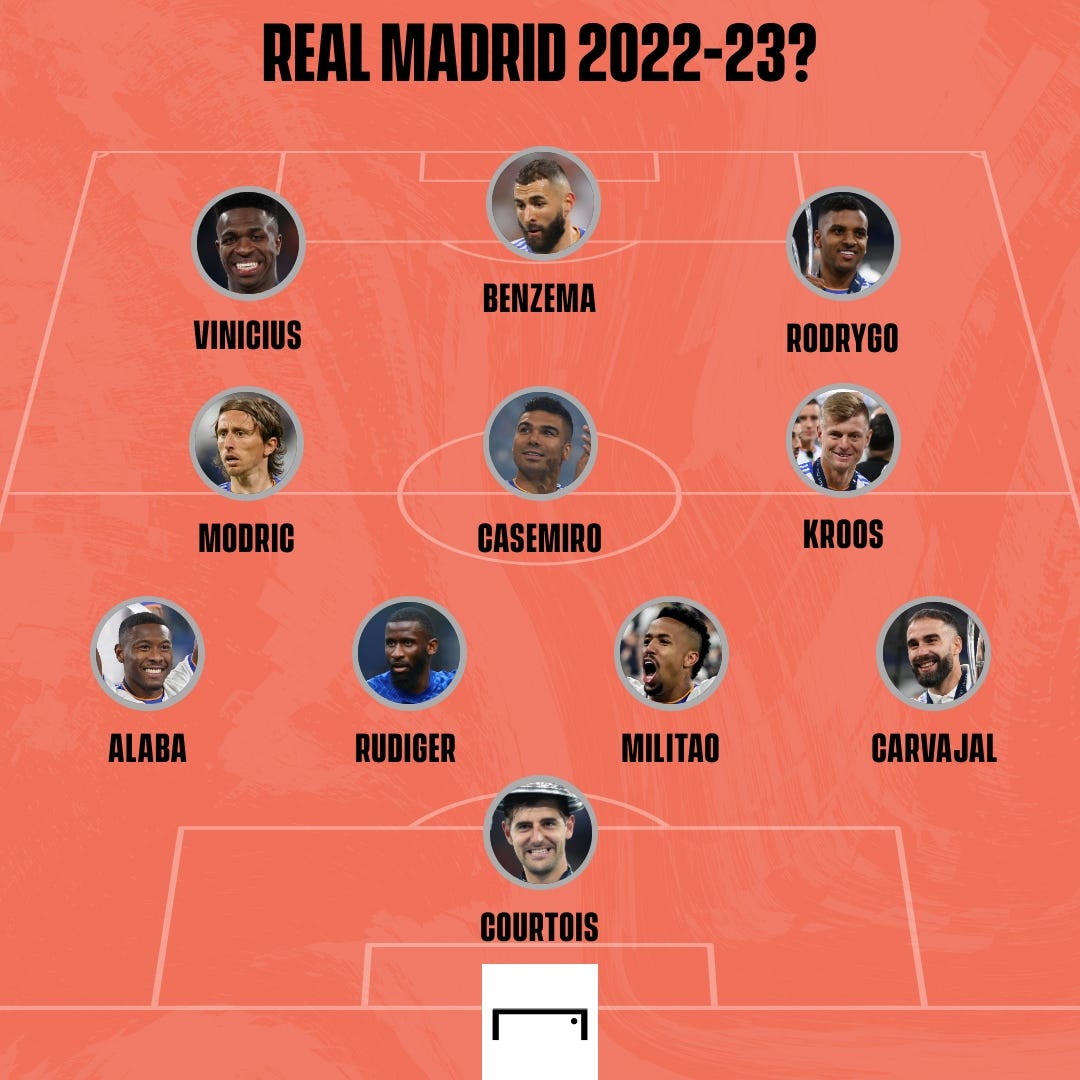 That would mean Rudiger partnering Militao on those occasions, with Alaba potentially slotting back into the middle against the very best opponents.

Despite their success in the 2021-22 season, Madrid are unlikely to be quiet in the transfer market this summer.

They are already closing in on their second signing of pre-season, with a deal of up to €100m (£85m/$107m) having been agreed with Monaco for them to sign midfielder Aurelien Tchouameni.

Los Blancos may also be in the market for a new forward, having seen Kylian Mbappe reject them to stay at PSG and Erling Haaland join Manchester City despite interest from Madrid.

Chelsea have to prioritise defensive signings this summer, with Rudiger unlikely to be the only centre-back to exit the club this summer.

Andreas Christensen has agreed a move to Barcelona, while the versatile Cesar Azpilicueta could yet follow him to Camp Nou.

The Blues have therefore made Sevilla's Jules Kounde their primary target to kick-off the transfer window, and are keen to get the deal done as soon as possible.