Christian Pulisic's Chelsea career is being held back by a run of injuries that is threatening to put him to the back of a queue in one of the world's most competitive squads.

His latest ankle knock is his third major setback since joining the Blues from Borussia Dortmund in 2019 for £58 million ($73m) – a record transfer for a US Men's National team player.

Including a whole host of minor problems, the 23-year-old has now racked up an estimated 11 injuries during his two-and-a-half years at Stamford Bridge, resulting in him missing 40 matches in all competitions for Chelsea.

It is an incredibly frustrating situation not only for the player but also his club's medical team, who have constantly tried to resolve Pulisic's problems by carefully handling his workload and conditioning.

However, they have, thus far, been unable to find any solutions, with his explosiveness always liable to lead to muscular injuries, while his agility and speed make him a moving target to be kicked by opposing players.

The United States men's national team captain is, at least, close to making another comeback, having returned to training on Thursday, raising hopes that he could feature for Chelsea before the upcoming international break.

Of course, Pulisic's latest injury occurred during his last appearance for his country, against Honduras in September.

“He got injured by a foul, a tough foul, and he hurt his ankle," Chelsea manager Thomas Tuchel explained when pressed on his winger's fitness issues.  “There is nothing to worry about in terms of the specific details. We are not hiding details. But I cannot give you all of the details because I am not a doctor.

"At the moment, though, he has had some setbacks from pain. Not from a major injury or complications. It is simply the pain in the ankle that disturbs him. Once these players with quick movements like Christian, once they feel this pain and they are not free in their movement, recovery doesn't happen. 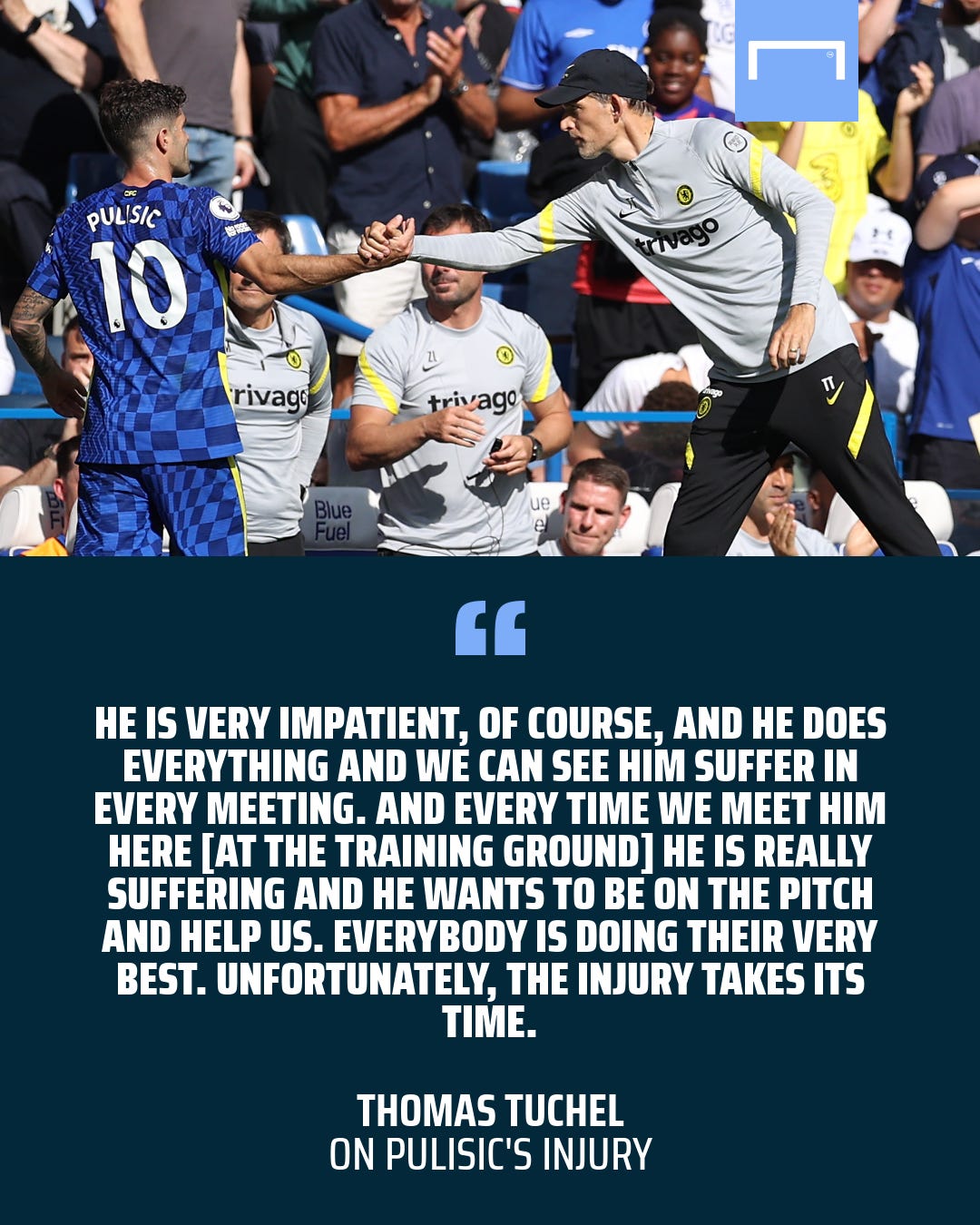 “So, right now, we are very, very close. He was so close to coming to training last week and had a little setback and reaction, with pain. Nothing serious, though.

“He is very impatient, of course, and he does everything and we can see him suffer in every meeting. And every time we meet him here [at the training ground], he is really suffering and he wants to be on the pitch, helping us.

"Everybody is doing their very best. Unfortunately, the injury takes its time.”

Time is a precious commodity in football, though, and particularly at a club like Chelsea. Pulisic will obviously always be a key figure for his country. But, at Stamford Bridge, players are expendable.

Things can change very quickly and while Pulisic is a highly valued and well-liked member of the squad, it is telling that Chelsea have been winning without him.

The depth of talent available to Tuchel was underlined only last weekend when his side routed Norwich 7-0 at home in spite of the fact that their two starting forwards,  Romelu Lukaku and Timo Werner, missed the Premier League clash through injur.

Remember, too, that Hakim Ziyech is struggling to overcome a shoulder problem, which has caused a dramatic dip in his form, and yet Chelsea are still finding ways to win matches. Why? Because other players are stepping up to the plate.

Mason Mount hit a hat-trick against Norwich,  while Callum Hudson-Odoi, who was arguably at the bottom of the pecking order before Pulisic's most recent injury, is showing signs that he is finally ready to realise his full potential in west London.

Pulisic, then, will be under immediate pressure to prove his worth to Tuchel when he does get back on the field.

Under previous manager Frank Lampard, Pulisic clearly demonstrated that he can become a world-beater. His contribution over two legs in last season's Champions League semi-final win over Real Madrid was immense.

However, Pulisic now needs to quickly put his injury problems behind him because, at Chelsea, time waits for no player – no matter how talented.