Reigning world champions Germany got off to the perfect start to their Euros campaign this week thanks largely to the typically graceful swing of an Adidas Ace football boot.

After taking an early lead, Joachim Low’s men had to ride a rocky period before Arsenal’s Mesut Ozil galloped away, utilising his trusty Ace to bend a pinpoint cross into the path of Bastian Schweinsteiger, who sealed a 2-0 win.

It was a passage of play that has left the Adidas Ace leading the INTERSPORT Football Boot Ranking in the assists category among midfielders at the tournament so far.

The match had seen Ozil go up in direct competition with Ukraine holding midfielder Taras Stepanenko and his Nike Magista, which sit two places behind the Adidas Ace in the midfield rankings.

Stepanenko is one of six midfielders in France wearing the Magista this month, including Ozil’s Germany colleague Mario Gotze. But he ultimately failed to contain Ozil, who hit 56 passes with a success rate of 88 per cent. Ozil’s Aces also created a further three shooting opportunities for his side.

Disciplined Ukrainian Stepanenko restricted the space in which Ozil could operate for large parts of the game but made just one successful tackle in the contest, leaving the Magista fourth in the boot rankings for 1vs1 duals.

Nike Mercurials lead the boot rankings overall for midfielders at Euro 2016, with a rating of 9.9/10 - thanks largely to Dimitri Payet and Luka Modric, who both proved match-winners in the opening week of the tournament. 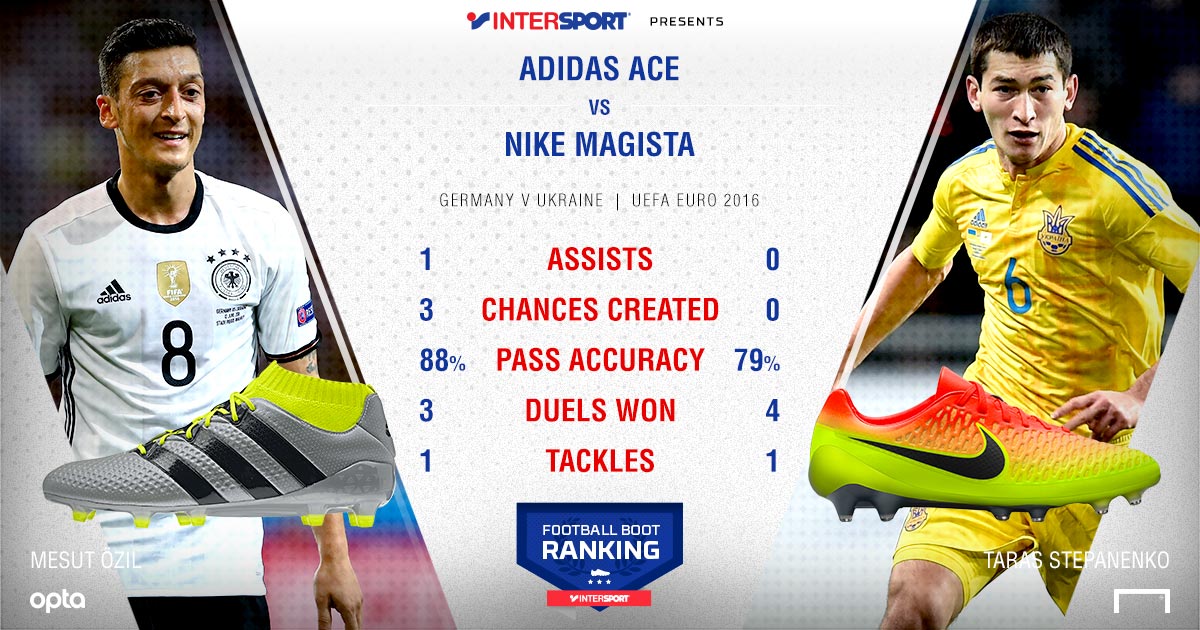 10 players are wearing these boots in France, including Slovakia’s Marek Hamsik, who himself was only denied a stunning goal in his side’s defeat by Wales due to a remarkable goal-line clearance from Ben Davies.

Hamsik may be yet to find his shooting boots but he is in large part responsible for the Nike Mercurial’s perfect 10 in the one-vs-one challenges category. The Napoli man won nine individual duels in 90 minutes with an impressive success rate of 75%.

The INTERSPORT Football Boot Ranking has been created to empower football fans to choose the best available boot for their needs and Ozil’s usage of the Adidas Ace thus far has played a major role in catapulting the boot to second in the overall rankings among midfielders at the Euros.

Its cousin, the Adidas X, sits third in the midfield rankings, with the likes of France’s N'Golo Kante helping it into the top three with an assist for Payet in the hosts’ 2-1 win over Romania on the opening night.

The INTERSPORT Football Boot Ranking looks at which boots the game's biggest stars are wearing and links the data to statistics from competitions across Europe, and fans can track the progression of their favourite boots throughout the Euros by navigating the rankings online. Discover which football boot performs the best now.