Steve Nash made one of his dreams come true on Saturday night, and that dream involved Paul Pogba and Hristo Stoichkov.

It's a wild sentence to say. Nash, the 48-year-old NBA Hall of Famer and coach of the Brooklyn Nets. Pogba, the 29-year-old World Cup-winning megastar that is the subject of one of this summer's biggest transfer dramas. And then there's Stoichkov, the 56-year-old former Barcelona and Bulgaria star that terrorized defenses all through the 1990s.

What a wild combination of humans to come together for a moment but, hey, most dreams are too wild to believe, right?

Nash's dream moment came on Saturday night in Miami, as he was one of many participants in a match appropriately titled 'The Beautiful Game'. Hosted by Brazil legends Ronaldinho and Roberto Carlos, Nash looked around and saw players that gave him butterflies.

There was Ronaldinho and Roberto Carlos, of course, two icons of the game. Fellow legends Cafu, Carlos Valderrama, Rivaldo, Deco and Patrick Kluivert were there too, just to name a few of the familiar faces that Nash found himself playing with and against.

Current stars like Pogba, Vinicius Junior, Weston McKennie, Paulo Dybala and Radamel Falcao also took the field, adding that bit of extra quality and speed to a game that certainly had its share of incredible players on the field at any given time.

It was a game that made Nash, for a moment, forget that he is now a 48-year-old basketball coach that hasn't played 11-a-side for as long as he can remember.

Even so, Nash looked like a natural, taking a touch past Pogba before firing the ball into the back of the net, a true striker's finish from a former point guard.

And, as the ball hit the back of the net, Nash was teleported to another time.

In that moment, Nash didn't feel like an NBA Hall of Famer. Instead, he felt like the kid back in Canada that fell in love with watching soccer on TV alongside his father. In that moment, he was reminded why soccer has, and always will be, his second sporting love.

GOAL 🇨🇦#NBA legend and @BrooklynNets coach STEVE NASH robs Paul Pogba before applying a perfect finish to give his team an 8-4 lead!@YorkUtdFC... he is *technically* a free agent 👀#CanMNT | #NetsWorld | 🔴 https://t.co/7JFAUhgjL6 pic.twitter.com/1Xm6wAlPKy

"Fortunately, I've gotten a chance to have so many great experiences," Nash told GOAL. "It's not quite like the first time, but it's still such an amazing honor to be able to play with some of the greatest players to ever play the game, people I admire, people that my dad and I sat around the TV watching at home.

"It was great. It was fun to take the field. For decades, I haven't played 11-a-side on a big pitch, but it was incredible to play.

"I'm pushing 50 here and I get a chance to play with some of the best players in the history of the game. To get a goal was cool and for Stoichkov to give me the ball and for me to have a good enough first touch, it really made my dreams come true, if I'm honest."

As a kid in Canada, this was one of Nash's dreams. Born in South Africa to a Welsh mother and English father, he grew up around the game. He played soccer all growing up, before eventually discovering basketball around the age of 12.

Eventually, basketball won his heart. A good decision, most would say, given how it all turned out.

However, given his skill set and love for the game he has shown over the years, it is fair to say that, in another life, Nash could have steered towards soccer rather than basketball. The former point guard is the perfect centerpiece for the famous "What if our best athletes played soccer?" question.

With the vision and footwork he displayed as a basketball player, it's easy to imagine Nash as a wily, playmaking No.10. There's a reason he wore the number during his time with the Lakers, and that was his desire to honor three of his favorite players of all time: Diego Maradona, Zinedine Zidane and Glenn Hoddle.

As Nash says, he is pushing 50 these days, but his goal on Saturday showed that his touch is certainly still there. Stoichkov may have provided the assist, but it was Nash that did the hard work to get his goal. He doesn't regret his path, given his Hall of Fame career in the NBA, but he's never strayed too far from the game. He's hosted and regularly played in charity matches featuring some of the game's biggest stars and has made his name known in New York's five-a-side scene.

Nash also bought a stake in the Vancouver Whitecaps and has always followed his beloved Tottenham from afar.

In some ways, Davies finds himself in a similar position to Nash 25 years ago. The Bayern Munich star is the player putting Canadian soccer on the map and opening the door for all of those following close behind him, much like Nash was in the NBA during the mid-90s.

"For him to go from Edmonton to Vancouver to Bayern Munich to winning a Champions League so early in his career, to becoming possibly the best left back in the world at such a young age, it's just an incredible accomplishment for him," Nash said. "No matter the athletic ability, the mentality, the things that have to go right for you and the perseverance he has to have is just incredible.

"It's a tribute to Fonzie and his relentless pursuit of his craft and how he continues to get better and how he's not fazed at every level he goes to. We're really really fortunate to have a player of his quality and mentality."

It's not just Davies, though, as Canadian soccer is truly on the rise. Improbably, Canada finished atop the table during CONCACAF's World Cup qualifying campaign, despite Davies missing much of the campaign.

Players like Jonathan David, Tajon Buchanan and Cyle Larin all established themselves as bonafide stars, proving that the country's success is far from a fluke.

As a result, Canada will play in the country's second-ever men's World Cup this fall, having missed out on every tournament since 1986.

It's a defining moment for the game in Canada, and one that Nash has dreamed of seeing since he was a young fan. 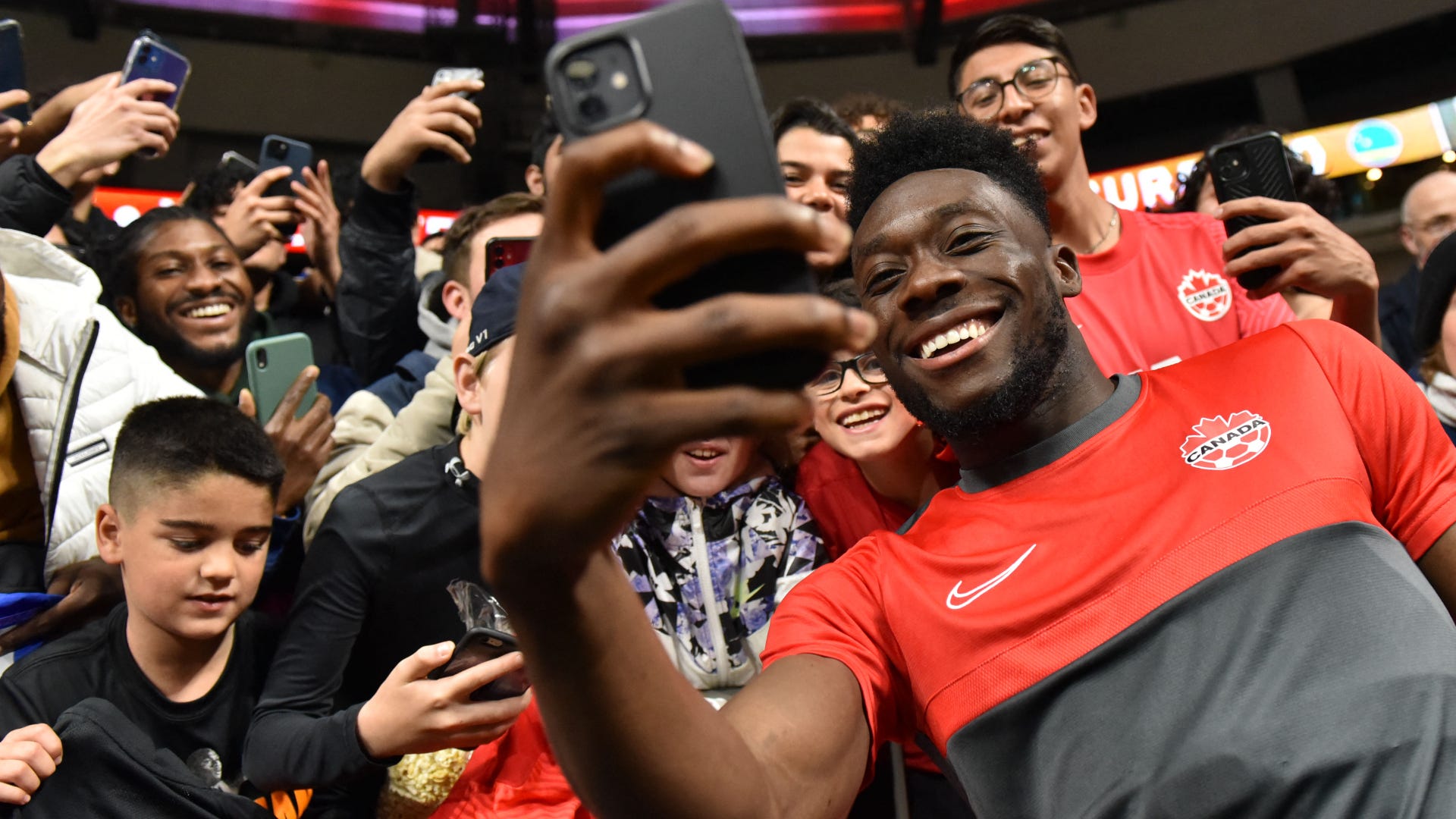 "It's been incredible," Nash said. "To produce players at this level, you have to give [Canada coach] John Herdman a lot of credit for the system, the style, the belief, the culture they've built there.

"They produce players that are talented enough, not only obviously world-class players like Fonzie, but also other players that are thriving in their leagues around the world and are able to slide into a system and perform and to win CONCACAF, which is almost unfathomable.

"If someone asked me five, 10, 15 years ago, I would think that's never gonna happen. The qualification is just an incredible moment.

"So many people waited a long time to see these guys get up and going in our country. It's so exciting."

When Canada kick off their World Cup campaign against Belgium on November 23, Nash will surely be following along. He'll be pretty busy coaching the likes of Kevin Durant and the Brooklyn Nets, but you just know Nash will have one eye on his country's long-awaited return to the World Cup.

Nash was just 12 the last time Canada played on the biggest stage, after all. It was right around the time he put the soccer ball away for good and turned his focus towards basketball.

It's a moment that, for him and many Canadians, will feel a long time coming, and another one that will remind him of what it was like watching that TV, sat with his dad, with soccer on his mind.