The career of Giovani dos Santos has been one of contrasts, conflicts and controversy. Now, it is at a crossroads. At 33, he's been a free agent for over a year, having been released by Liga MX giants America in the summer of 2021.

It is looking increasingly unlikely that we will see him playing at the highest level again, and a career which once promised so much and which at times contained sparks of greatness, will simply now fade long into darkness.

A versatile forward who featured as an attacking midfielder, winger or striker, Dos Santos was a talent of precocious flair, capable of scoring great goals and setting them up for others.

He was recruited for Barca's La Masia academy at 13, and starred at Juvenil level before he made his B debut at 18. His first senior appearance arrived a year later, in September 2007, with Dos Santos replacing Thierry Henry as a second-half substitute in a 3-1 win over Athletic Bilbao.

On the final day of the season, he scored a hat-trick as Barca beat Real Murcia 5-3, seemingly confirming his status as a club legend of the future. However, it instead signalled the end of his Camp Nou career.

The problem was Dos Santos was competing for the same position as Lionel Messi – a battle he was never going to win – while another La Masia graduate, Bojan Krkic, made a more explosive impact with 10 goals in his debut season, making the Mexican the more expendable of the pair.

He was still widely regarded as one of the most promising youngsters in world football, though, so he left in 2008 to try to secure first-team football elsewhere.

Dos Santos ended up at Tottenham but he failed to fit in and spent most of his time out on loan, with Ipswich, Galatasaray and Real Santander. 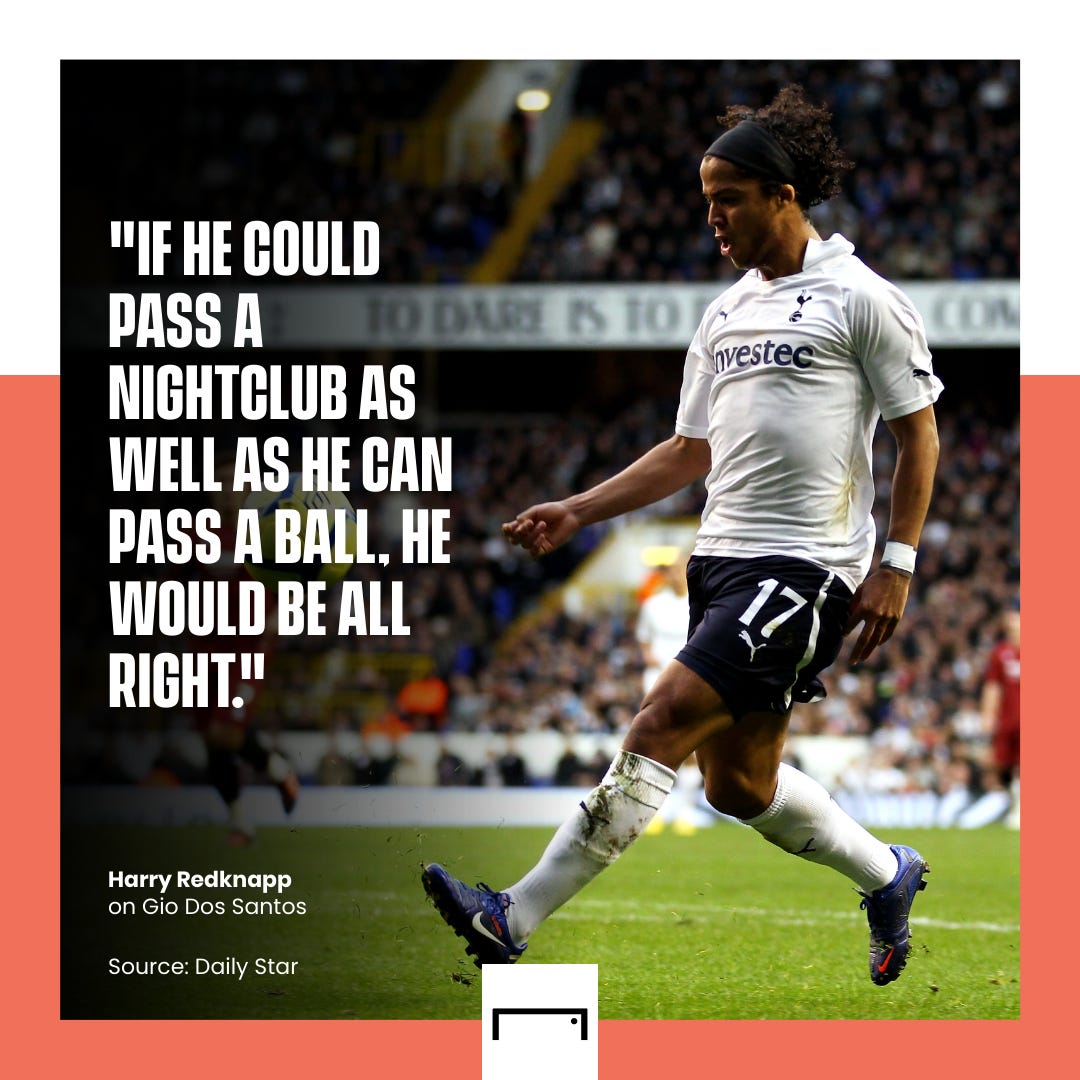 He was also hampered by the manager who signed him at Tottenham, Juande Ramos, being sacked in October 2008, after an awful start to the campaign.

The Spaniard was replaced by Harry Redknapp, who did not fancy Dos Santos at all, even going so far as to publicly castigate the youngster for partying too often and turning up late to training.

"If he could pass a nightclub as well as he can pass a ball, he would be all right," Redknapp told the Daily Star in 2010. His mum and dad came over to see me last year and he apologised because they realised he wasn't dedicated.

"He's got bags of ability and fantastic skill. But, suddenly, he was late on Monday mornings, upset stomach. He'd probably been in Barcelona partying somewhere.

"However, he has had a great World Cup. If he knuckles down this year, he could be a top player."

Dos Santos' attacking versatility was a double-edged sword too.

He played best as a second striker, but he was also deployed as a playmaker where his ability to create chances was less frequent, or as an inverted winger where he went too far inside to look for the ball, or on the left wing, where he was confined to the touchline and would often drift out of the game.

Eventually, Dos Santos moved back to Spain with Mallorca in 2012 on a free transfer and found his feet, impressing top-scoring for the relegated club with six goals in 32 appearances.

This upturn in form earned him a move on to Villarreal, where he finally found regular top-level game time, playing back to back seasons at the same club at senior level, something he had never done before.

However, he surprised many Mexico fans who were hoping he was about to embark upon a great renaissance in Europe, by joining LA Galaxy at the age of 26.

Nevertheless, his form continued to improve to such an extent that he was longlisted for the 2015 Ballon d'Or – one of only two MLS players to be so – alongside Andrea Pirlo at NYCFC.

He was also the cover star of the MLS special editions of the FIFA video game in 2016 and 2017. 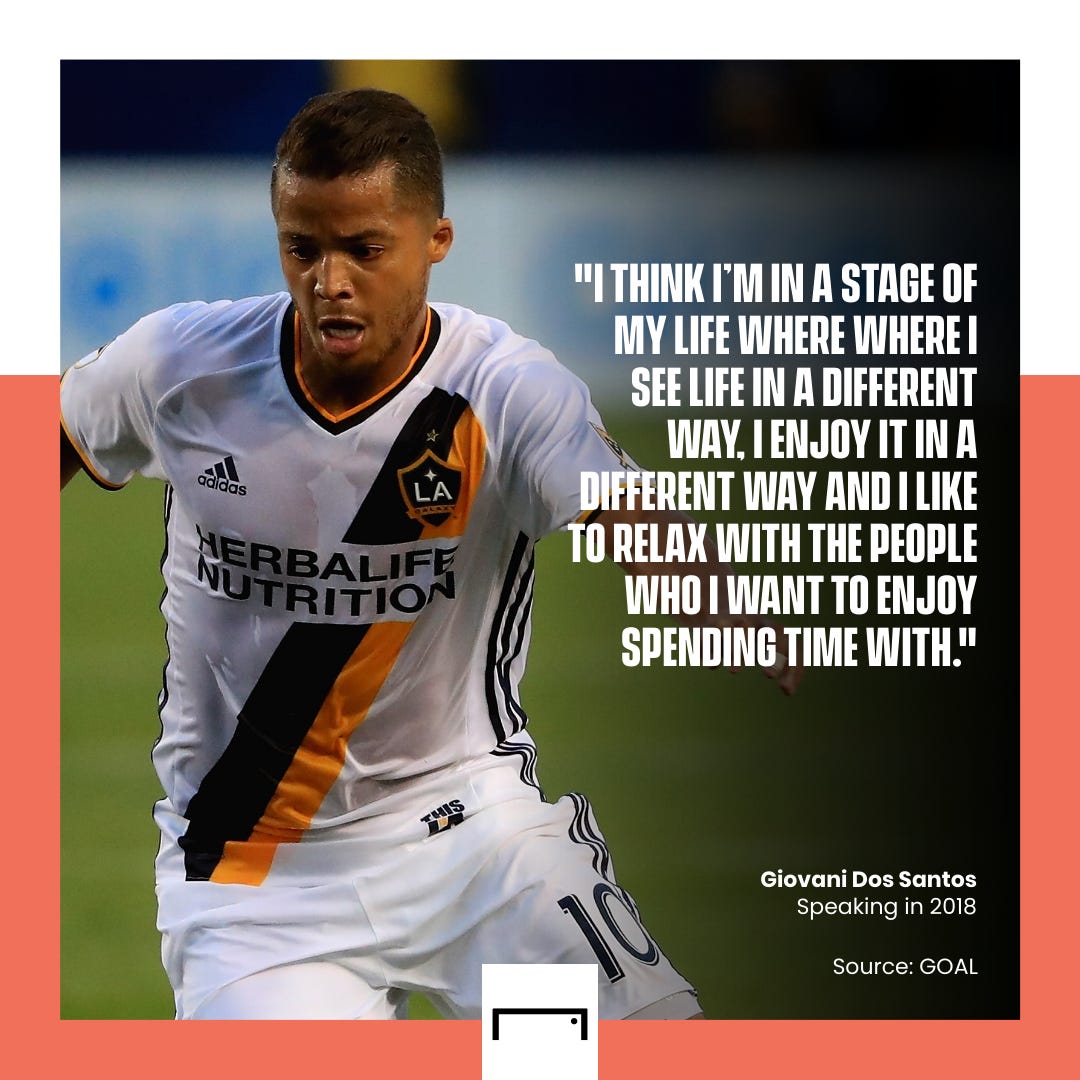 “It’s great to be on the list with some of the best players in the world,” Dos Santos said of his Ballon d'Or nomination.

“I’m very happy to represent my country and my team. I’m very proud. I’ve been working very hard, and while it was a surprise for me, I’m very happy.”

Moving away from his party lifestyle was also a factor in Dos Santos turning his back on European football, as he attempted to calm down, get closer to his family and concentrate on his football.

"I’m going to be honest, I love to be at home," he told GOAL in 2018. "I just trained, I came home and I like to be home with my family, be at home with my parents here and spend the day with them.

"I really like to watch movies, to read books. Really, I’m a very calm person in that respect. I think I’m in a stage of my life where I see life in a different way, I enjoy it in a different way and I like to relax with the people who I want to enjoy spending time with."

However, in 2019, Dos Santos was released by Galaxy after two years battling injuries, and played club football in his home country for the first time with America, having long been established as a hero for El Tri.

While Dos Santos never hit the heights initially expected in his club career, he has arguably surpassed them at international level.

He started with helping Mexico to victory at the 2005 U17 World Championship, assisting eight of the 16 goals they scored at the tournament, and taking the Silver Ball for the second best player at the tournament – losing out to Anderson in the battle for the top prize.

His first senior tournament brought similar success, as he was named best player at the 2009 CONCACAF Gold Cup, where Mexico triumphed on United States soil, beating their arch-rivals 5-0 in the final.

It was an achievement they repeated two years later, again beating the USMNT in the decider, this time 4-2, with Dos Santos scoring a brilliant chip in the final which won him goal of the tournament.

It is a goal of true majesty, Dos Santos leaving goalkeeper Tim Howard sprawled on the floor, doubling back on himself, before lofting the ball into the net via the crossbar – despite defender Eric Lichaj being positioned right on the goal line.

It is a goal worth watching over and over again, and encapsulates the talent Dos Santos has but which he has displayed only on occasion.

The pinnacle of his international achievements came in 2012, as Mexico won the Olympic gold medal for men's football in London.

Dos Santos scored three goals, including the quarter-final winner against Senegal in extra time, however an injury in the semi-final against Japan ended his tournament prematurely as he had to sit out the final triumph over Brazil at Wembley.

Dos Santos has also played at three World Cups for Mexico, although he did not manage to help them break the round-of-16 hoodoo which has haunted his nation since 1994.

He came close in 2014, when his superb 25-year strike put El Tri ahead in the second half against the Netherlands, however they conspired to throw it away with two goals conceded in the final six minutes to lose 2-1.

While he is still only in his early-30s, it looks unlikely Dos Santos will reach a fourth tournament at Qatar 2022. He never enjoyed consistent success at America, set back early on by a nasty gashed leg suffered from a challenge in ‘El Clasico National’ against Chivas Guadalajara.

He has been a free agent since June 2021 after falling out of favour at America under new manager Santiago Solari. There have been rumours of a return to professional football, but little more.

Dos Santos' close ties to his family could be a factor, with the sudden death of his father – former Brazilian footballer Zizinho – a month after his America release, from Covid-19 aged only 59, no doubt affecting him deeply.

His party-boy reputation, whether still relevant or not, continues to follow Dos Santos around.

Reports in the US suggested he could make a return to football in 2022 with a clause that would allow him to throw house parties or go to nightclubs without the paparazzi showing up. However such a deal – whether one is likely to exist or not – has yet to come to pass.

So, instead we have the videos of great goals and stories of what might have been. There certainly should have been many more.