Lionel Messi's list of records and achievements, and his constantly scintillating performances, are so impressive that sometimes it feels redundant to keep highlighting them.

Still, there is no escaping the fact that in a summer when the world's finest players are in action simultaneously on both sides of the Atlantic Ocean, the Argentina captain stands head and shoulders above any of his peers.

Messi was once more the heart and soul of his team on Saturday as Argentina downed Ecuador 3-0 to clinch their fourth consecutive Copa America semi-final. In the process, he took his own tally for the tournament to four goals and four assists in five games, more than any other player involved in either the Copa or Euro 2020.

It is a startling tally for any footballer, let alone a 34-year-old who has racked up just under 60 games between club and country in the last nine months. Should Argentina go on to win this competition, it will surely be enough to add yet another Ballon d'Or to his bulging collection.

That weekend victory, marked by another free-kick and two flawless assists, perfectly showcased the Messi who is leading the Albiceleste's march in Brazil.

Perhaps now unwilling or unable to dictate every facet of the game as he has done on so many occasions in the past, the veteran instead is focusing on being as effective as possible.

The likes of Rodrigo De Paul, Gio Lo Celso and Marcos Acuna are there to forage in midfield and put in the hard yards; Messi, for once, has the liberty to float around the penalty area and make things happen.

Even taking into account Ecuador's rather porous defence, that was exactly what he did at the weekend. The Tricolor received an early warning when Messi found himself clean through against Hernan Galindez, but for once his radar failed him and a chance you would expect him to convert with ease instead bounced off the goalkeeper's left-hand post and out of danger. 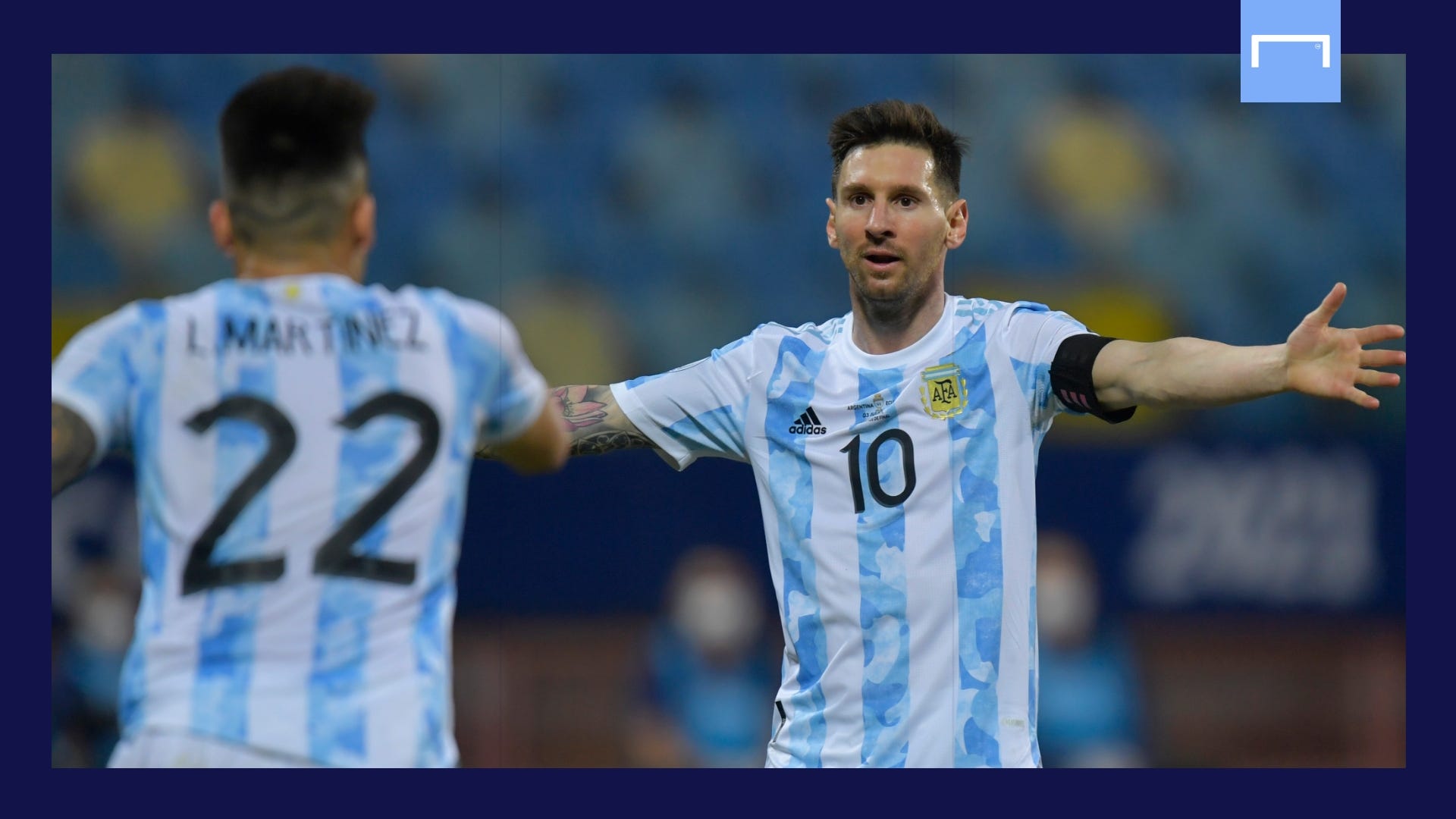 It proved only a temporary respite. With 40 minutes on the clock the No.10 picked out Nicolas Gonzalez with a stunning pass behind Ecuador's defence and, when the forward was chopped down by the onrushing Galindez, he repeated the feat by playing in De Paul, who was left with the simplest of finishes.

Then, late in the second half, and with Ecuador threatening to fight back, a dainty flick of that magical left foot set Lautaro Martinez free to effectively end the game as a contest.

Even so, there was still time for the grand finale: after VAR overturned Wilton Sampaio's penalty call and gave Argentina a free-kick on the edge of the area, Messi dispatched his effort as if it were a spot-kick and gave Galindez no chance between the posts, leaving coach Lionel Scaloni and anyone else who happened to be watching in awe of his outrageous talents.

“He is the best player in history,” Scaloni beamed to reporters after the game, with Argentina safely through to Tuesday's last-four clash with Colombia. “It is difficult for anyone to measure up to him.

“Perhaps sometimes Neymar is similar. The best thing that could happen to us as lovers of football is that he keeps playing as long as he can and we enjoy him. Even his opponents enjoy him.” 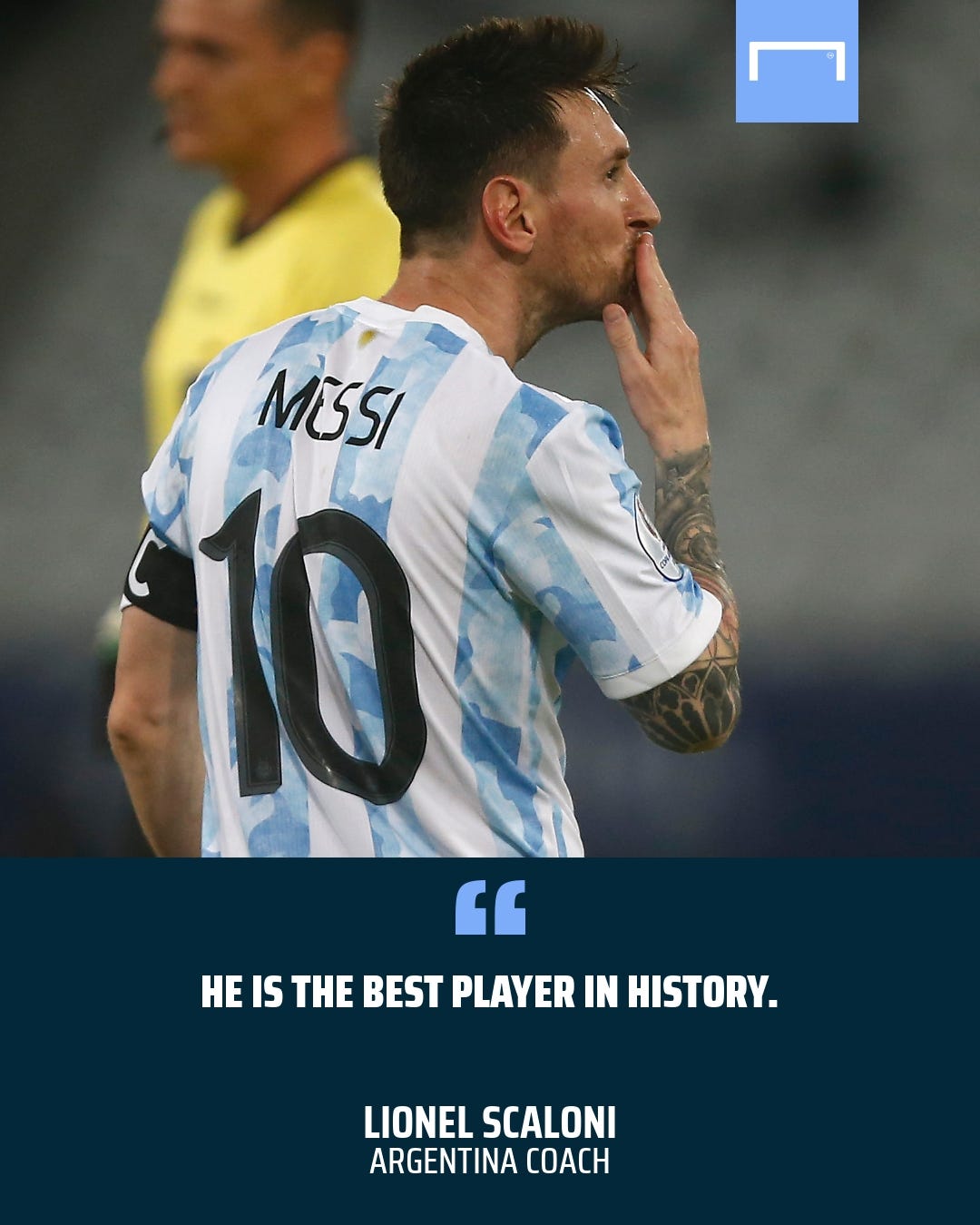 While Messi is desperate to prevail in Brazil and finally break that major international title duck which has so haunted him over the years, one thing he cannot be accused of is saving his best performances for Argentina.

None of his rivals can match his record of 46 goal participations, including 33 goals, since the start of the current year for club and country, even if that monumental effort was not enough to steer troubled Barcelona to Liga and Champions League glory.

Whether the Albiceleste can do better than the Catalans is still to be seen. Colombia will be a difficult but not insurmountable rival in the last four, with Scaloni's men blowing a two-goal lead during their last meeting in June to draw 2-2.

The Cafeteros were also somewhat unlucky not to get a result against Brazil in the group stage following a hugely controversial goal for the hosts which involved a deflection off Argentine referee Nestor Pitana.

If all goes well, the biggest test looms. Neymar and Co. have been an all-conquering machine throughout the Copa, breaking down their rivals with merciless efficiency and strolling into the final on Monday at the expense of Peru.

The very meeting of the two stars would make the final one of the most anticipated deciders in recent football history, and a chance for Messi to finally gain revenge for 2019's semi-final defeat which left him fuming at the perceived injustice suffered.

For that to happen, it is likely that Leo will have to have at least one more sparkling display in store to upset the favourites and seal Argentina's first major trophy since 1993.

That is the big prize; the seventh Ballon d'Or, another record, which would almost certainly be winging his way should the Albiceleste prevail would just be a most welcome bonus for this most remarkable of footballers.