William Saliba couldn’t keep the smile off his face when he was asked how much he’d enjoyed his first ever meeting with Tottenham. “I waited a long time for my first North London derby,” he beamed. “I enjoyed it from the first minute to the end. I am so happy.”

Last Saturday’s 3-1 success against Spurs was a long time coming for Saliba. For three years he had to watch on like everyone else when Arsenal took on Spurs, either from the stands at the Emirates Stadium or on his TV during his three loan spells in France.

But last weekend, he was finally able to get his first taste of what it’s really like to compete in the derby - and he marked the occasion with the type of performance that makes a mockery of his tender years.

Up against Harry Kane, Saliba was exceptional - as he has been from the opening game of the season, when he was named Player of the Match on his debut away at Crystal Palace.

Saliba had more touches (77) than anyone else against Spurs. He also made more passes (70), more successful passes (67), more tackles (3), more clearances (3) and more recoveries (11) than any of his team-mates. He also finished the game having won 100 percent of his aerial duels.

It was a near flawless performance from the 21-year-old, who has established himself as one of the Premier League’s best centre-backs in just eight games. 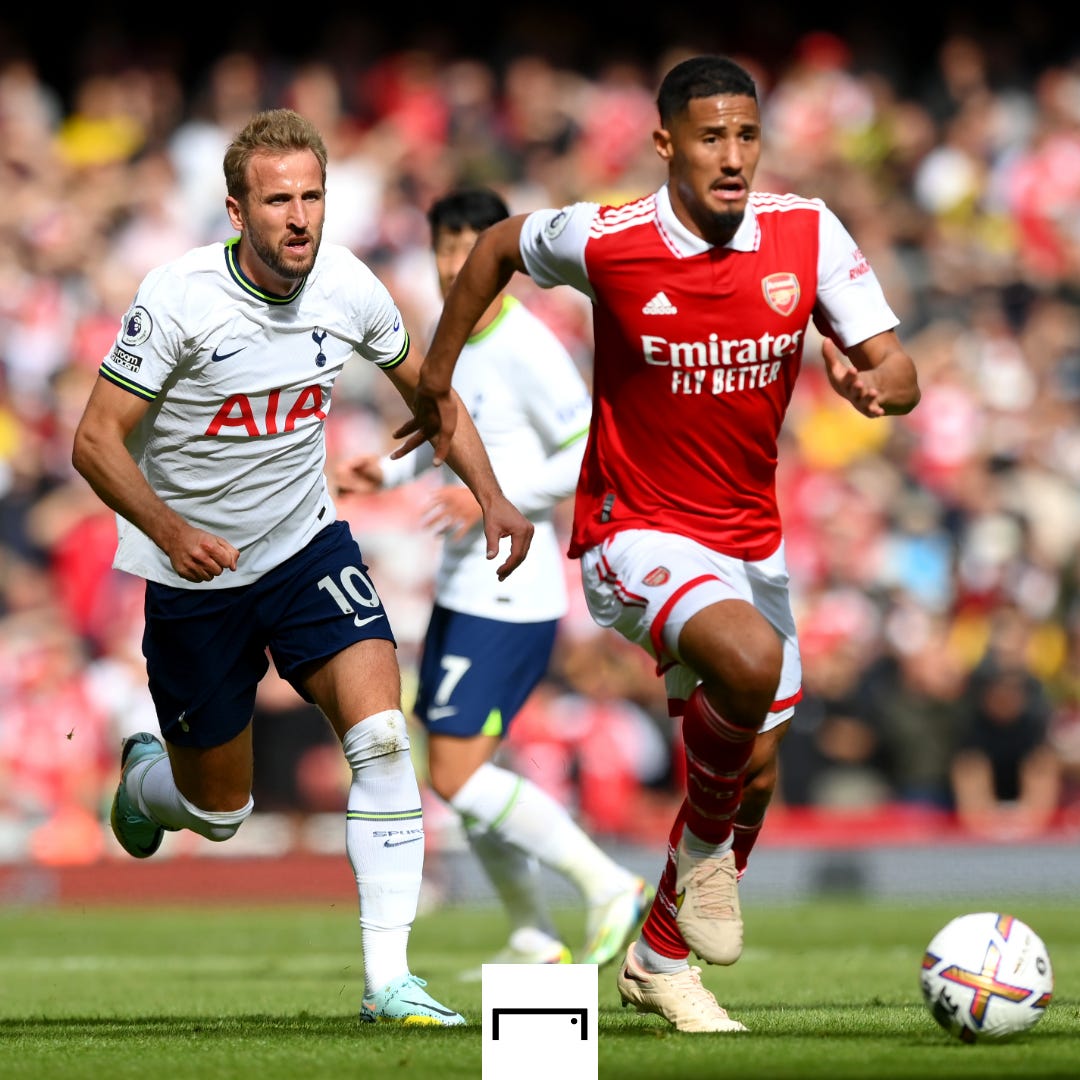 “He is a bit of a Rolls-Royce with the way he moves,” Aaron Ramsdale said in the aftermath of Saturday’s win. “He has never seems phased. It is a credit to him that he has been put straight into the team. He has fitted in really well.”

Saliba’s impact on this Arsenal team can’t be underestimated - nor can how much his performances have contributed to the impressive start to the season the Gunners have enjoyed.

The young Frenchman - who has confirmed talks over a new contract have begun - has played every minute in the league so far, helping the Gunners to three clean sheets. He has chipped in with two crucial goals at the other end, too.

So far he has passed every test that has come his way, including seeing off the threat of Kane during last weekend’s derby success. This Sunday could be his toughest test to date, however, when Liverpool and Mo Salah come to town.

Jurgen Klopp’s side may be struggling to find their best form at present, but they are still formidable opponents, and Mikel Arteta will be well aware of the threat they will pose.

For Saliba, it will be another opportunity to go up against the very best - and that is something he is relishing. 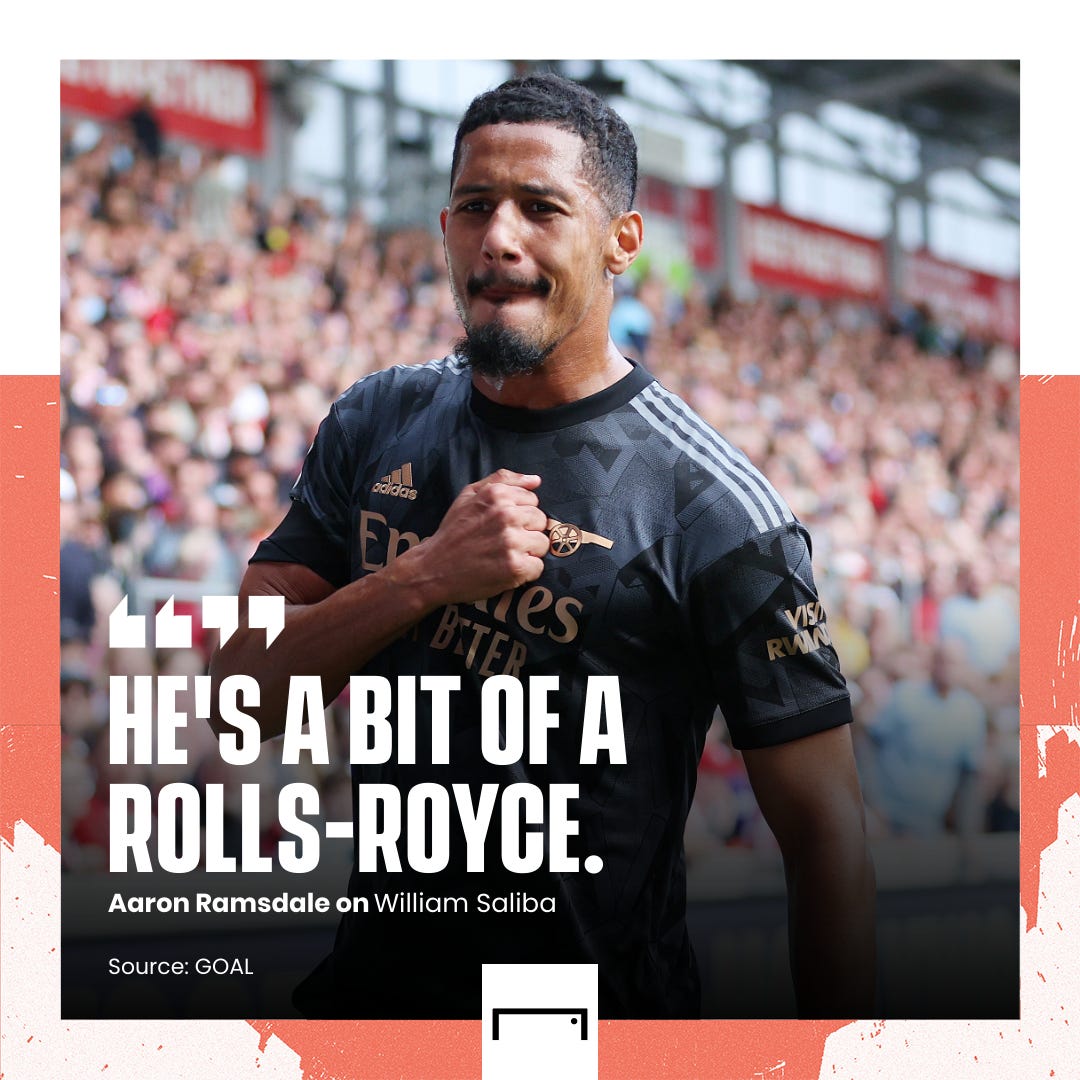 “We play against the best players in the world,” he said, when asked about the prospect of facing Salah. “It is good for young players like me. I learn a lot.

Confidence does not seem to be in short supply when it comes to Saliba. The £27 million ($30.7m) signing from Saint-Etienne has adapted to the Premier League with consummate ease.

For someone so young, his numbers across the opening eight games are hugely impressive and stack up against the best the league has to offer. Virgil van Dijk has long been held up as the best in the business when it comes to defending, but Saliba has all the attributes to reach the incredible levels the Dutchman has set over the last few years.

“This guy is 21,” Arsenal midfielder Granit Xhaka said, while discussing his team-mate. “He looks like he is 30. He has discipline and big character. He is not so loud, but he is a proper leader in my eyes. He is amazing.”

Arguably the most impressive thing about Saliba is his ability to read the game. He has won possession 71 times in eight Premier League games this season - more than any of the player in the English top flight. 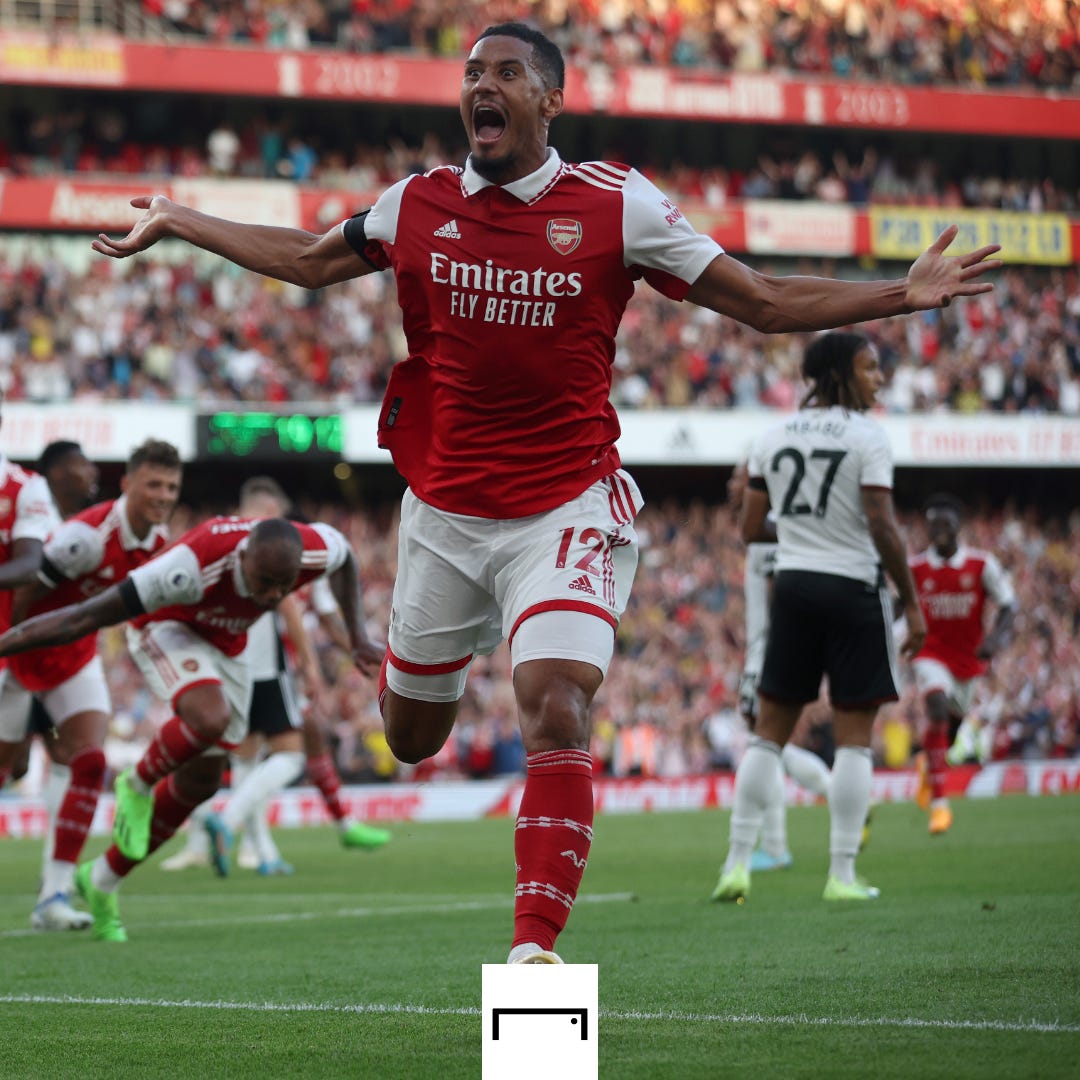 He has also only been dribbled past once, and that was against Spurs on Saturday when Son Heung-min briefly got the better of him.

In possession, the Arsenal defender is exceptional on the ball. Saliba has made 526 passes so far this season, completing 492 of them. That’s a passing accuracy of 93.5%, the second highest amongst Premier League defenders who have attempted a minimum of 250 passes since the start of the campaign.

When he returned to Arenal in the summer following his loan spell with Marseille, the expectation levels on Saliba were huge. It almost felt impossible for such a young player to live up to the hype.

But instead he has produced a level of performance that has actually surpassed what many were expecting.

The Arsenal fans have taken to him instantly, with his new chant - which goes to the tune of 'Tequila' by The Champs - now a firm favourite around the Emirates.

Saliba left the pitch on Saturday with nearly 60,000 people singing his name after the North London Derby success. So it’s no surprise that he is struggling to keep the smile off his face right now.

Who is the best central defender in the Premier League?