It was a finish that gave us all a reminder of the quality that Gabriel Martinelli possesses.

The Arsenal attacker had only been on the pitch for 93 seconds when Takehiro Tomiyasu floated a sumptuous pass over the top of the Newcastle backline.

Yet he showed no sign of rustiness as he watched the ball drop over his shoulder before planting a fabulous volley past the onrushing Martin Dubravka and into the far corner to seal a 2-0 win for the hosts.

It was Martinelli’s first Premier League goal since he struck away at Crystal Palace during the penultimate game of last season, and his first at Emirates Stadium since he found the target against Sheffield United in January 2020.

For a player who started his Arsenal career in such impressive goalscoring fashion, those are remarkable statistics – but they also underline the way in which his time in north London has flatlined since that blistering start during the opening months of the 2019-20 season.

When he first arrived in England from Brazil, it looked like Arsenal had unearthed a diamond. He scored seven goals in his first seven games, including netting twice against Liverpool at Anfield.

However, since then, the young Brazilian has found things difficult.

Having scored 10 times in his first season, he found the net just twice in 2020-21 and had failed to score in his first eight appearances of the current campaign. 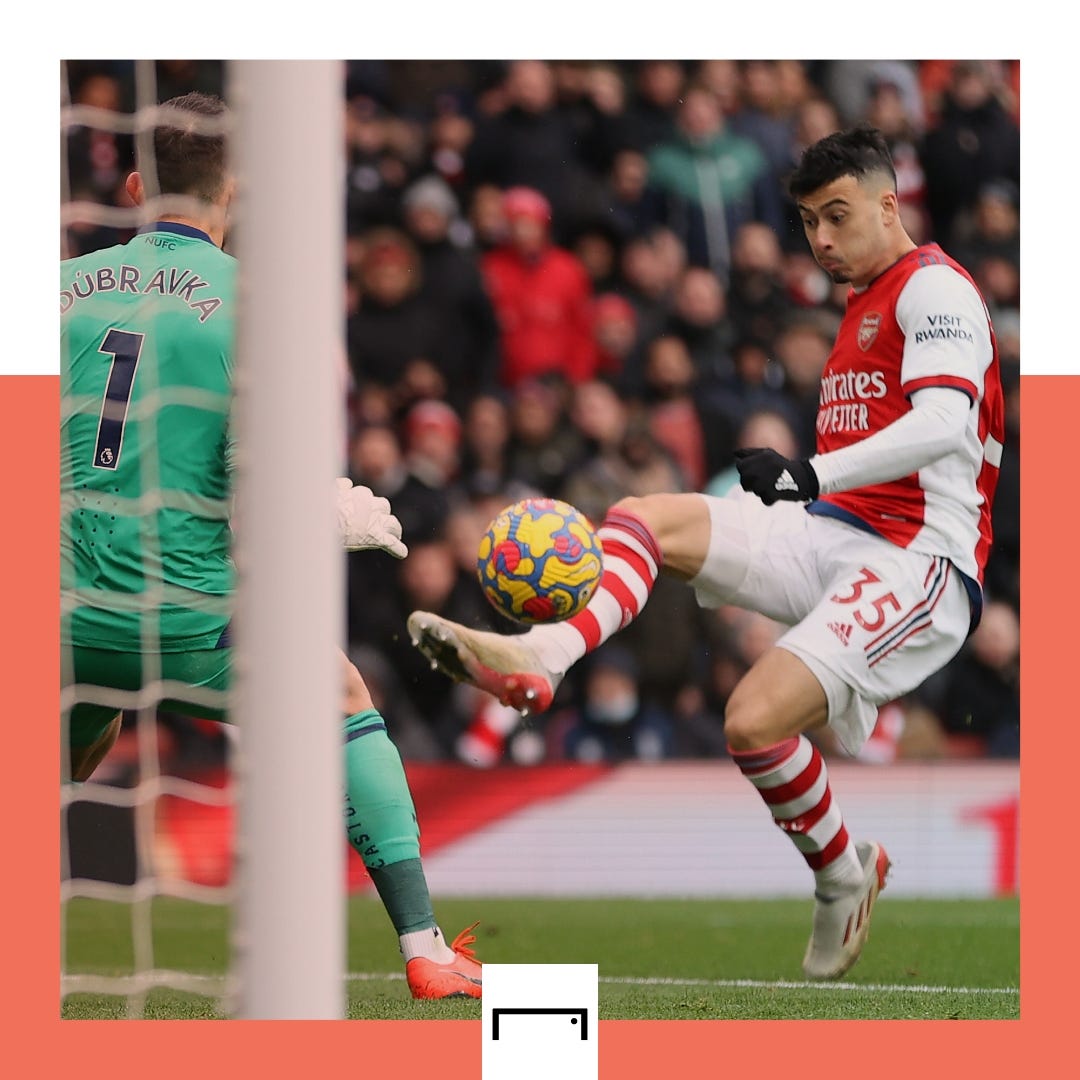 So, it was no surprise to see him show some real emotion as he celebrated Saturday afternoon's strike.

It was a goal that put the seal on an excellent second-half performance from Arsenal as they picked up the win they needed to move level on points with fourth-placed West Ham in the Premier League.

"I am especially happy for Gabi because of how he behaves," Mikel Arteta said after the game.

"He is patient but, at the same time, he is really pushing and challenging, and he makes every decision that you make even harder because he deserves more.

"I am really pleased because he really helped the team get the points today. The technique [for the goal] is so top.

"When the ball is flying over your head, to keep the ball down and have that quality to finish, it is impressive."

Arsenal had struggled to break Newcastle down in the first half, despite enjoying almost 80 per cent possession, with captain Pierre-Emerick Aubameyang somehow missing an open goal from point blank range after Dubravka had pushed out Smith Rowe’s header.

But the Gunners were transformed after the interval, playing at a much higher intensity against the league’s bottom-placed side.

They eventually got the breakthrough on 56 minutes when an excellent move involving Bukayo Saka, Smith Rowe and Nuno Tavares resulted in Saka smashing a thumping finish across Dubravka into the far corner.

It was no more than Arsenal deserved for the way they had started the second half, but their mood soon changed when Saka was forced off with what looked like a muscle injury.

Arteta opted to replace the England international with Martinelli rather than Nicolas Pepe and it proved to be an inspired decision, as the substitute struck within two minutes of coming on.

The way he swept Tomiyasu’s pass beyond Dubravka was a magical reminder to everyone of what he can do in the final third and it will come as a major boost to Arteta, especially with Aubameyang due to depart for the Africa Cup of Nations next month.

However, given Aubameyang’s worrying form in recent weeks, it could also give Arteta cause for thought ahead of the upcoming trips to Manchester United and Everton.

Gabriel Martinelli scored 93 seconds after coming off the bench with his second touch of the game 👏 pic.twitter.com/NedUMh6hUG

The Arsenal captain has now gone four games without a goal and has wasted some glorious opportunities during those matches.

Having started the season so well, Aubameyang is now clearly struggling for confidence and his place in the starting XI should not be guaranteed.

For Arteta, however, the overriding feeling after this win will be of relief.

After seeing his side capitulate in the second half against Liverpool last week, he would have known the importance of bouncing back straight away, especially with away games at Old Trafford and Goodison Park up next.

So, the Arsenal boss was understandably delighted to see his side return to winning ways straight away, albeit against a Newcastle side who look in real trouble this season.

"It was really important to bounce back," said the Gunners boss. "In the first half, we lacked some urgency and some composure in the final third.

"We had to be patient. We had to play with urgency and rhythm. That’s what we did in the second half. We found spaces and that’s how we scored the goals.

"We are on a good run and we have to carry on going. We have to analyse this game and start to prepare the match against United as quick as possible because we don’t have many days."

Arsenal will end the weekend outside the top four on goal difference only if West Ham lose at champions Manchester City on Sunday.

Given where they were after the opening three games of the season, that is an impressive turnaround from Arteta’s young side.