Brazil became the first nation to achieve qualification for World Cup 2018 after a campaign of two halves.

After faltering under previous coach Dunga, the arrival of Tite in June 2016 saw the five-time world champions completely transformed as they went on to win eight consecutive matches and secure their berth in Russia.

Below, Brasil Global Tour looks back at their 14 qualifiers so far.

In a state of transition under new coach Dunga, Brazil certainly weren’t favourites for the clash in Santiago but did not expect to slump to a 2-0 defeat, despite coming up against the reigning South American champions and by far the best team on the continent at the time.

It was also the final match goalkeeper Jefferson would play for his country to date. Having established himself as the Selecao’s undisputed no.1 since Dunga’s appointment, Jefferson was blamed by his coach for Eduardo Vargas’ opener and banished from the national team. 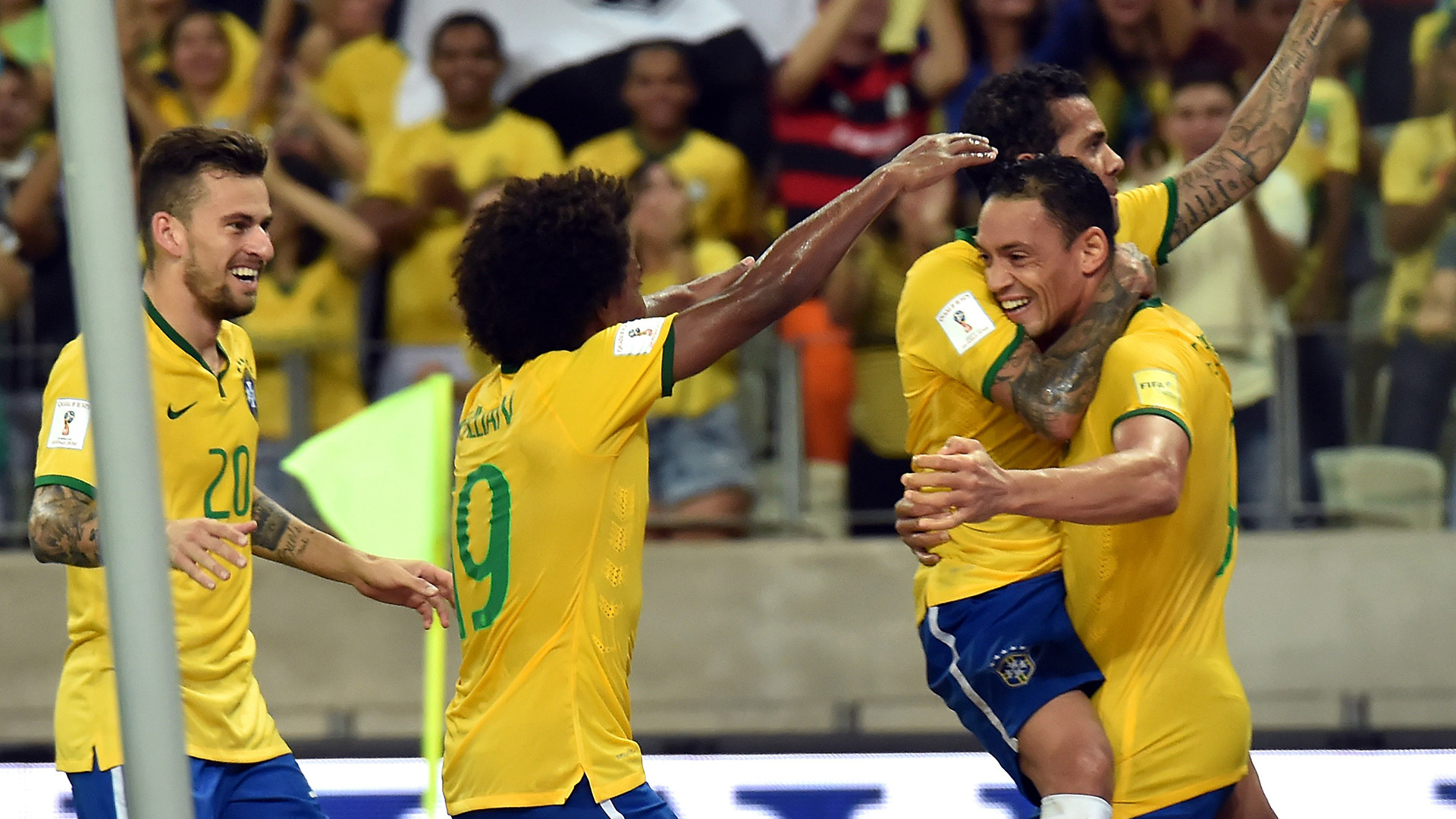 Dunga's Braizl got their campaign back on track in the second of the opening double-header of World Cup qualification for Russia 2018, comfortably seeing off Venezuela in Fortaleza.

Two goals from Willian set the hosts on their way before veteran striker Ricardo Oliveira rounded off the scoring to net his first international goal in eight years. 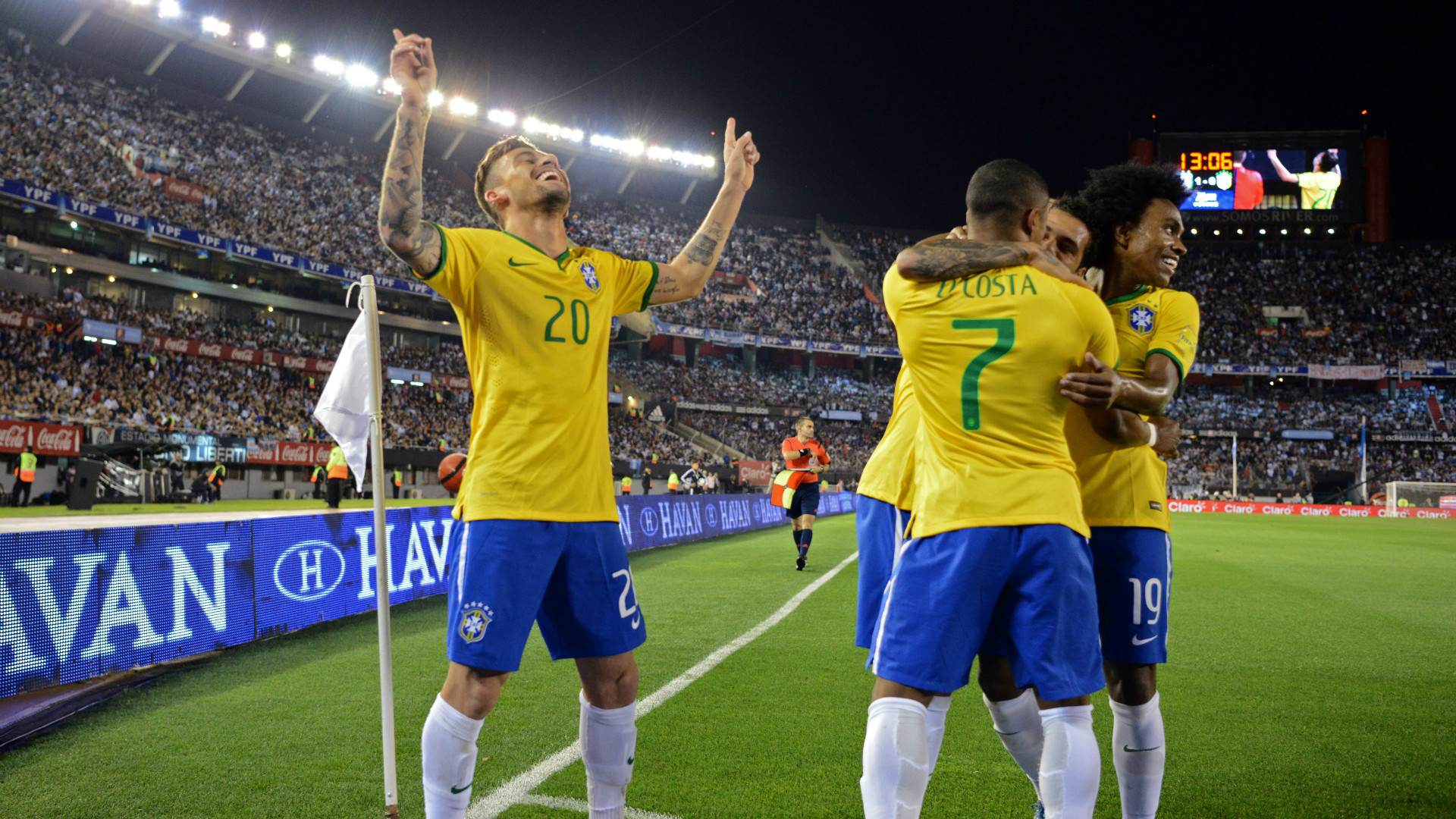 With three points from two matches, Brazil would have taken a draw against old rivals Argentina in Buenos Aires. Ezequiel Lavezzi put the hermanos ahead after 34 minutes after Lucas Lima lost the ball in the build-up.

But the Santos playmaker atoned for his error by grabbing his first goal in a Brazil shirt to grab a vital equaliser on the hour mark. 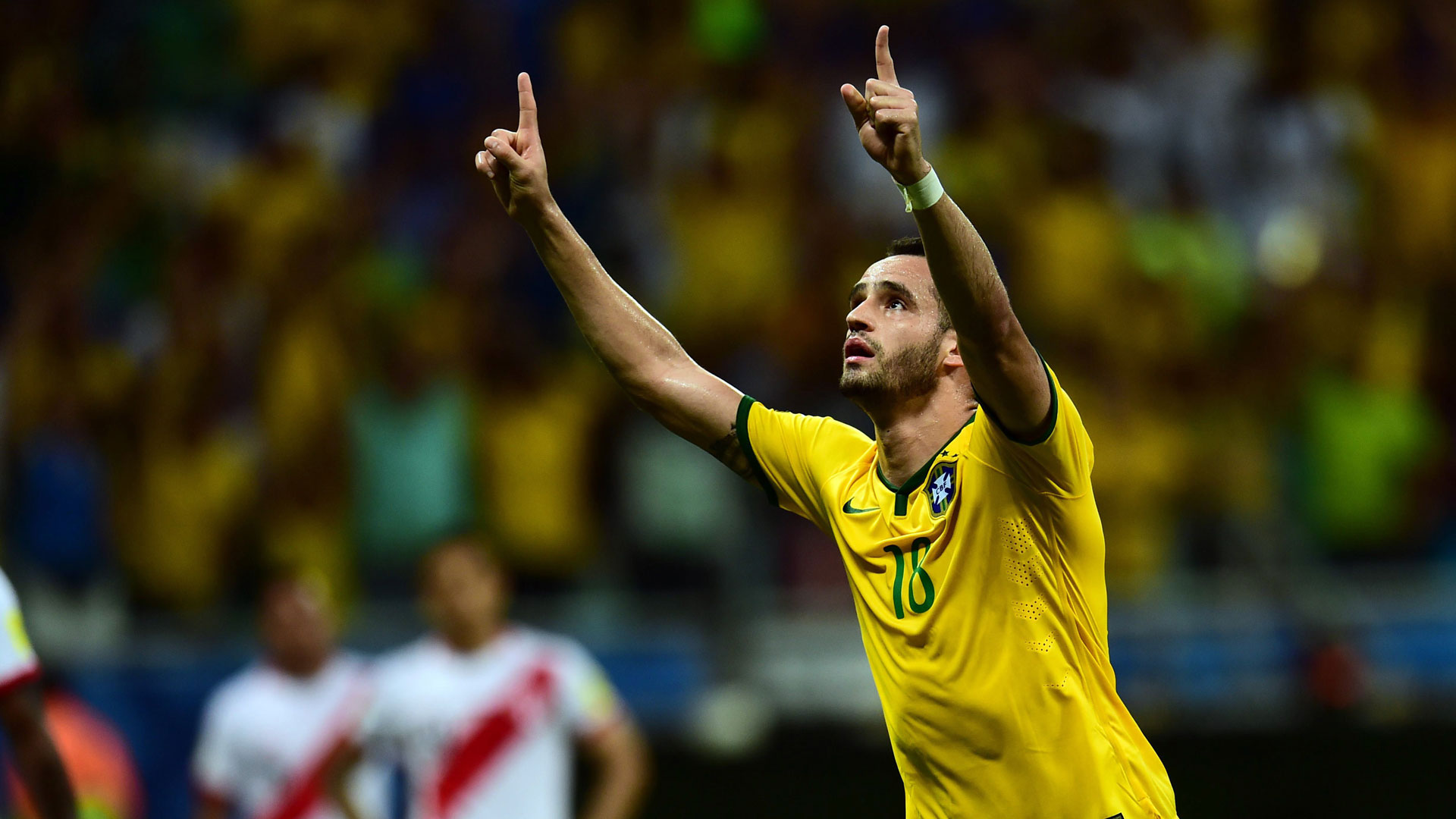 Things were looking up for Dunga after a comfortable 3-0 win over Peru gave the impression that the defeat to Chile was little more than a blip. It was also the night on which Renato Augusto reignited his international career.

Back in the squad after a four-year absence, he was a substitute against Argentina but started against Peru and rounded off a fabulous individual performance with a coolly taken goal. He has since gone on to emerge as one the Selcao’s best and most consistent performers. 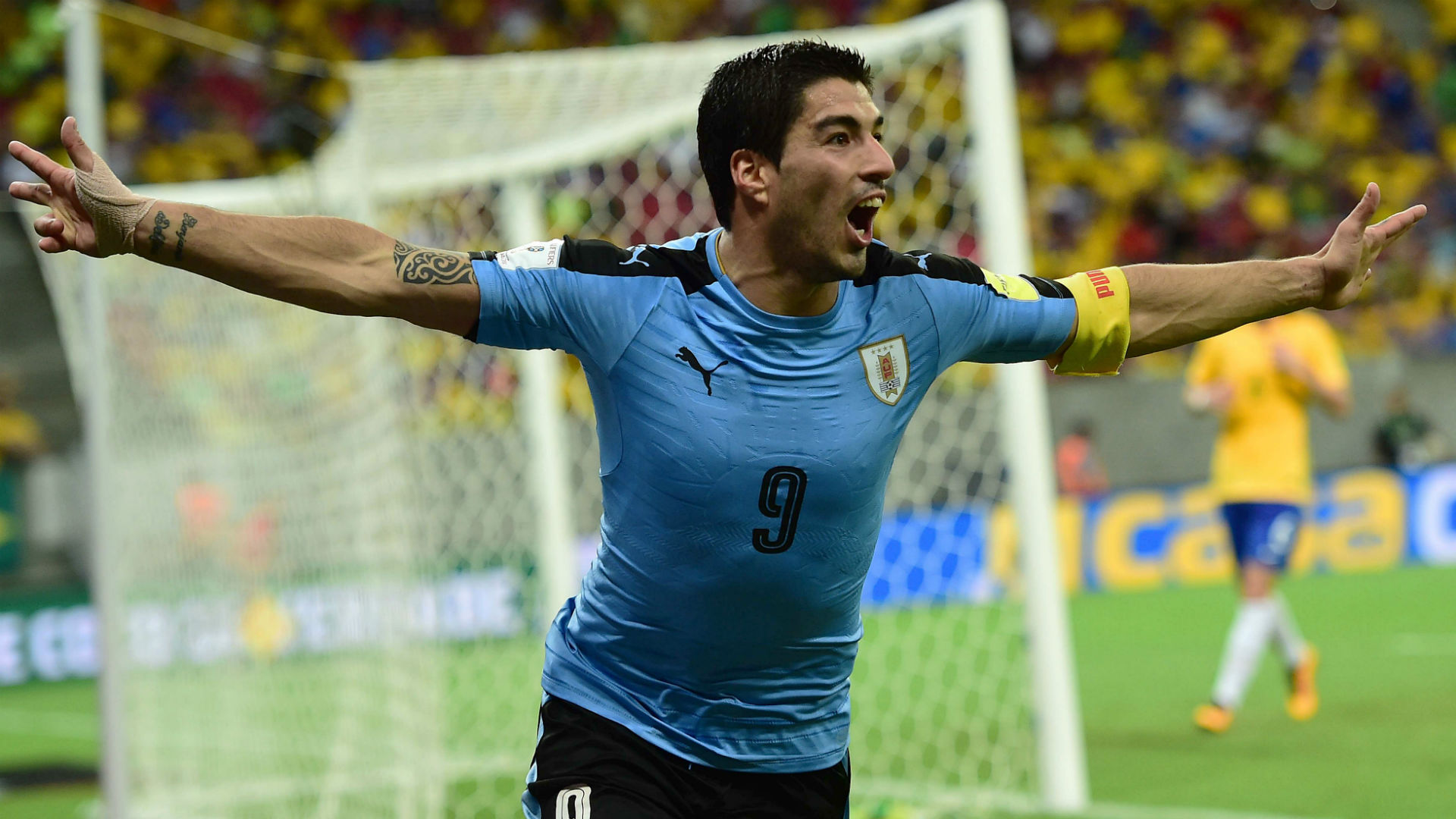 Brazil got off to a fine start to their first match of 2016. It took less than a minute for Douglas Costa to give them the lead, converting a teasing low cross from Willian. When Renato Augusto doubled the home side’s lead with a wonderful dummy to bamboozle Fernando Muslera 25 minutes later, Brazil were in dreamland.

However, the second half flipped the game on its head as Edinson Cavani and Luis Suarez earned Uruguay a well-deserved draw in Recife. It was also the night on which David Luiz was cast aside. He has yet to appear for his country since. 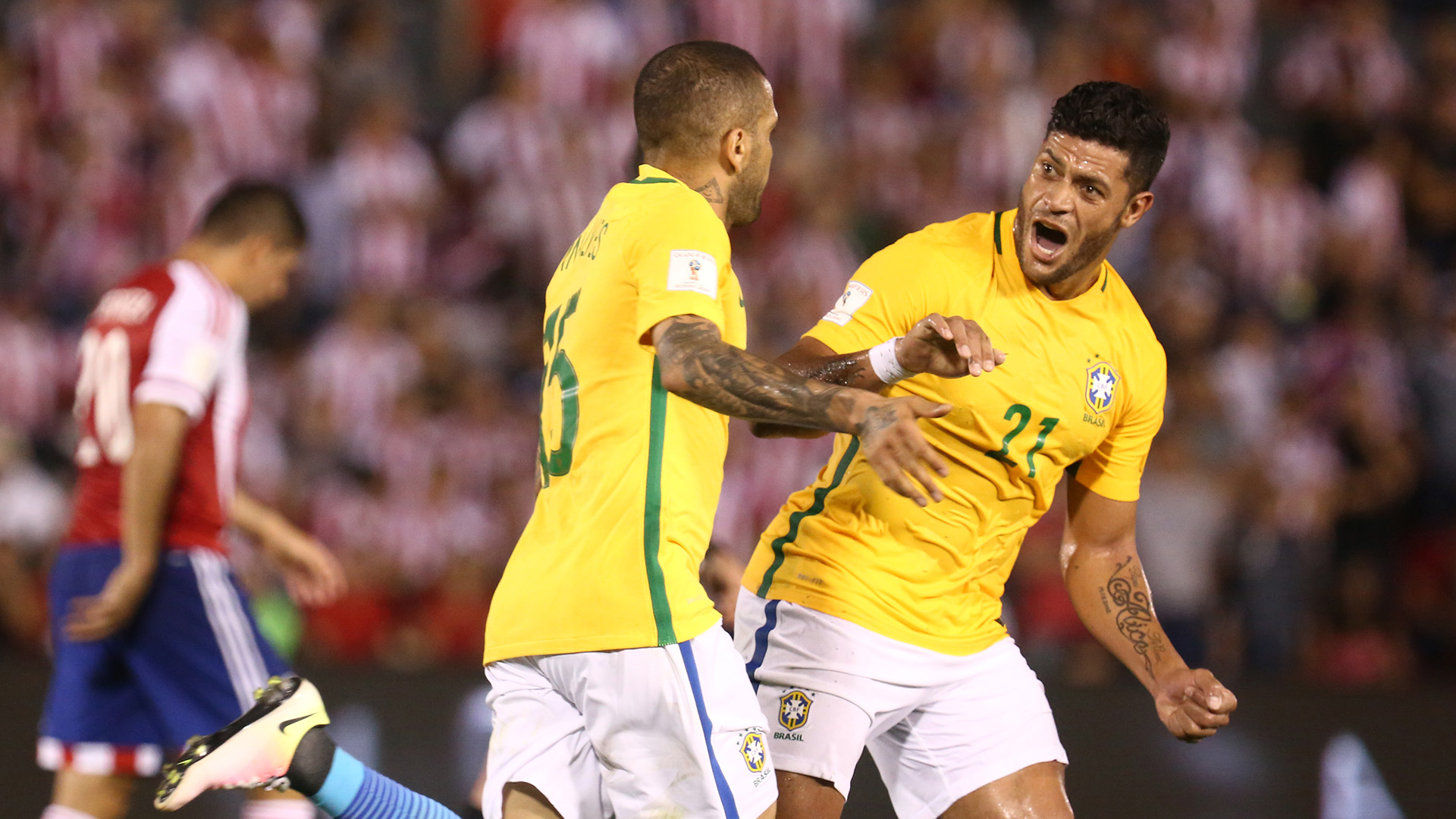 The draw against Uruguay left Brazil feeling the pressure as in a highly competitive qualification process and coach Dunga was made to sweat in Asuncion a few days later.

There was talk of the coach not even making it to June’s Copa America, and the knives were out when the Selecao found themselves two goals down with ten minutes remaining. But a stay of execution was granted as Ricardo Oliveira pulled one back and Dani Alves hit an injury-time equaliser. 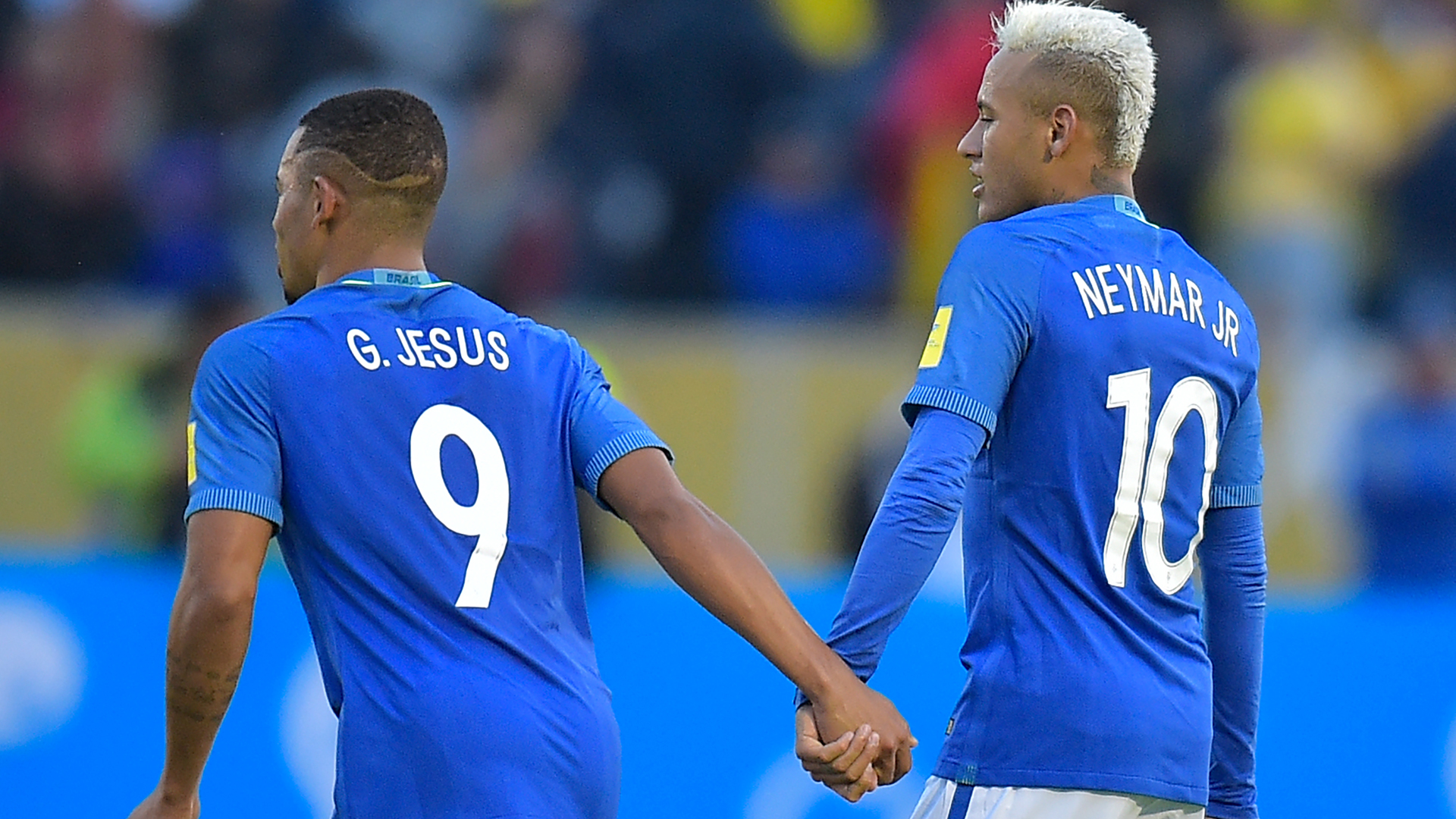 New Brazil coach Tite made his debut in the dugout as the Selecao got their World Cup qualifying campaign back on track with a 3-0 victory over Ecuador.

A penalty from Neymar and two goals from Gabriel Jesus gave the five-time world champions their first win in Quito for 33 years. There were some teething issues in the first half but Brazil came alive in the final twenty minutes as Gabriel Jesus had a direct hand in all three goals on a stunning senior international debut. 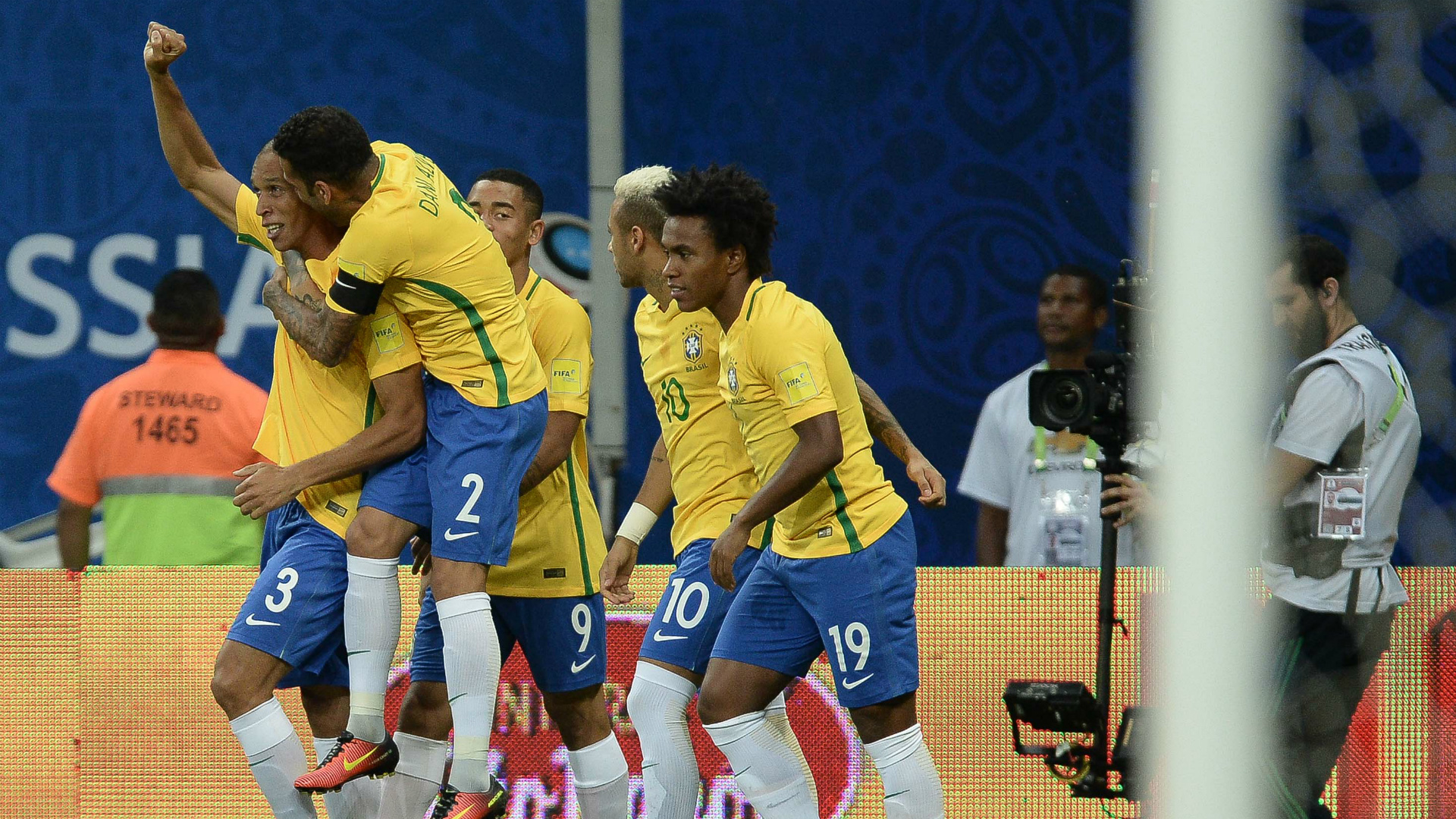 Brazil and Tite made it two out of two days after their trip to Quito with a 2-1 victory over Colombia in front of over 36,000 fans in Manaus. Miranda gave the hosts the lead before an own goal from Maquinhos levelled things up before the break.

The game was billed as something of a grudge match for former captain Neymar, who had a troubled past against the Colombians dating back to World Cup 2014. But after leading his side past their under-23 side in the Rio Olympics in the previous month, Neymar exorcised some ghosts as he hit a stunning winner to seal a vital win for his side. 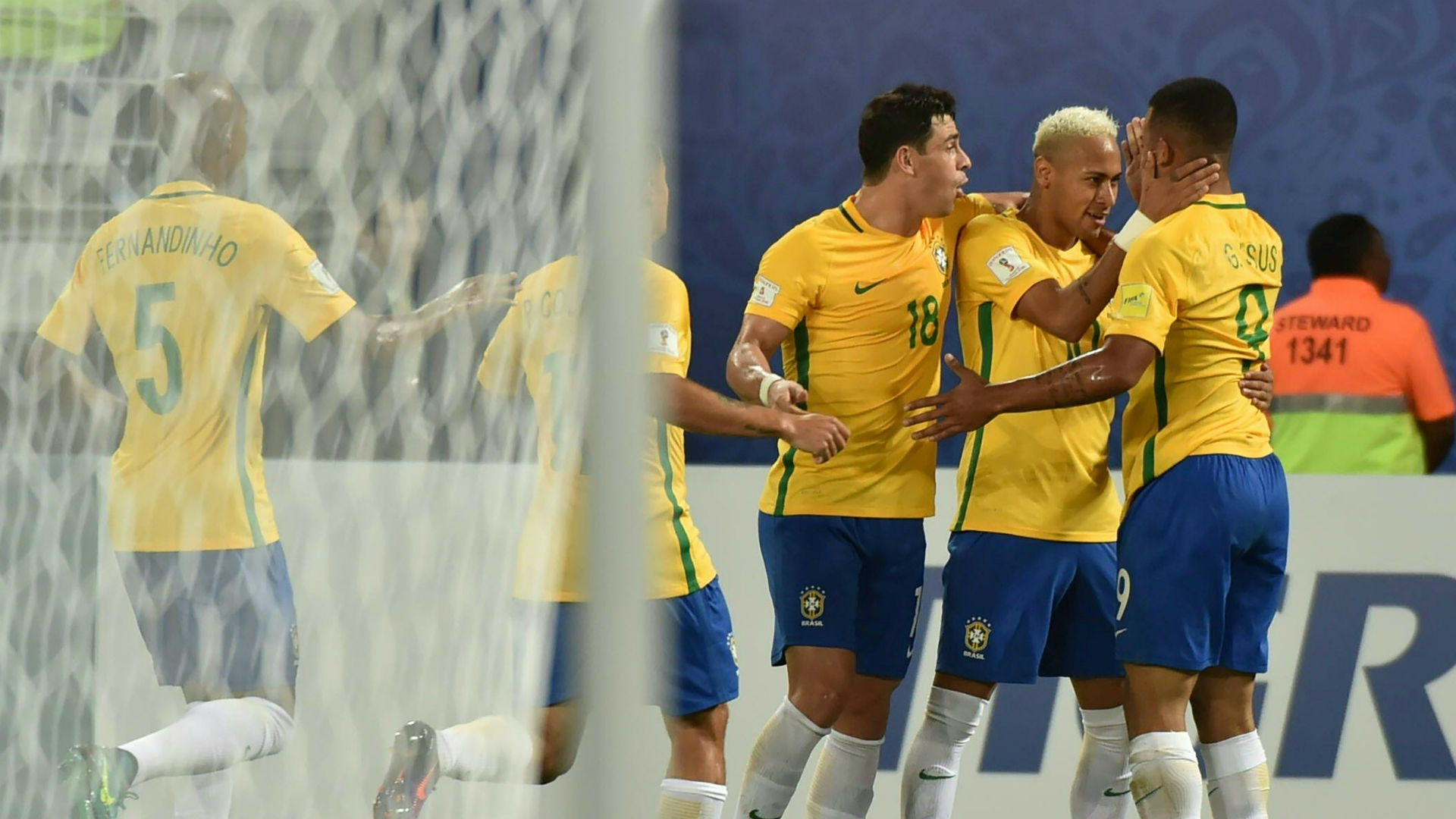 Neymar was simply too much to handle for an overwhelmed Bolivia as Brazil coach Tite made it three wins out of three. After opening the scoring in Rio Grande do Norte, the Barcelona star set up goals for Filipe Luis and Gabriel Jesus. Philippe Coutinho, handed a start ahead of Willian, also struck in a four-goal first-half blitz as Brazil put on a show at the Arena das Dunas.

With his 49th international goal, Neymar moved above Brazil great Zico and into outright fourth in the list of highest goalscorers for the national team. Substitute Roberto Firmino later headed a fifth. 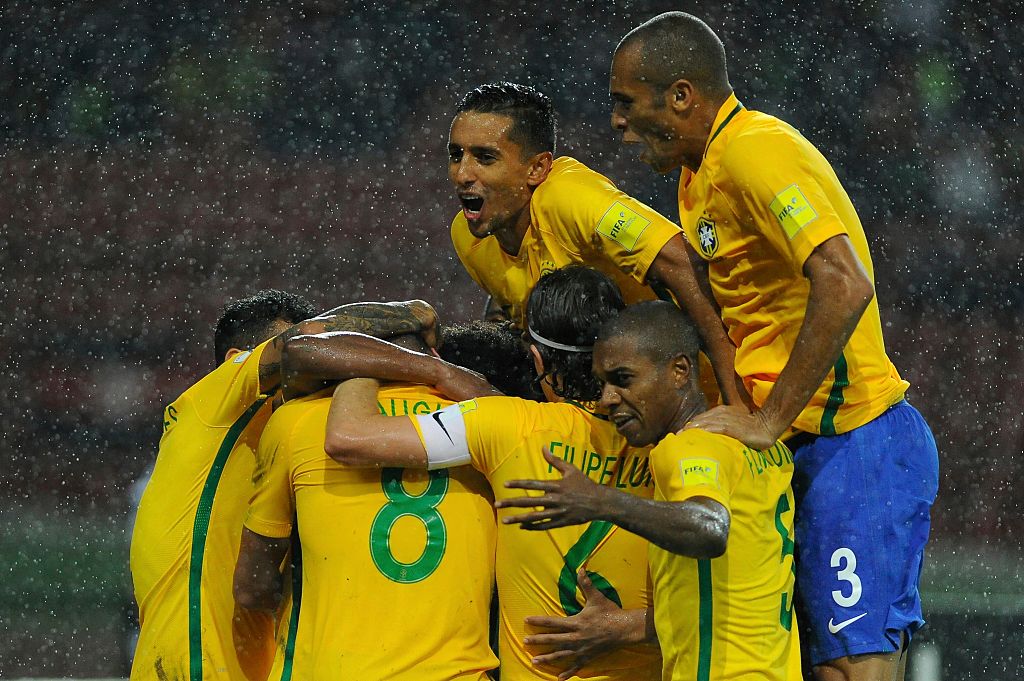 Brazil jumped to the top of the CONMEBOL World Cup qualifying standings after seeing off Venezuela 2-0 in Merida. Top spot was up for grabs in South America following Uruguay's draw in Colombia earlier on Tuesday and Brazil took full advantage thanks to the in-form Gabriel Jesus and Willian, despite a blackout halting proceedings late in sodden conditions.

A sublime chip from Gabriel Jesus set the Selecao on their way in the absence of suspended Neymar, before Willian settled proceedings shortly after the break. Not even a floodlight failure could turn out of the lights on Brazil’s charge to the top of the continent. 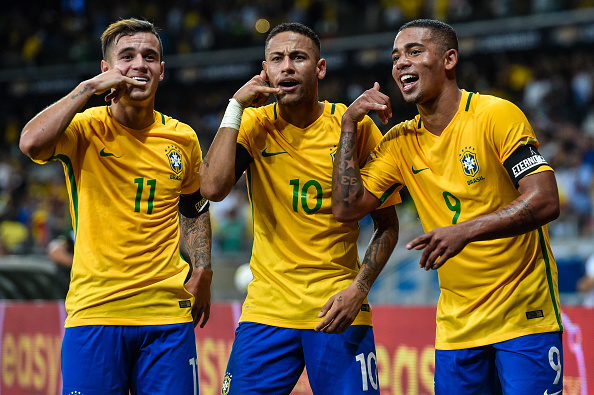 Neymar scored a milestone goal as Brazil piled the pressure on Argentina in World Cup qualifying with a 3-0 win on Thursday. The Barcelona star netted his 50th international goal, to go with efforts from Philippe Coutinho and Paulinho, in the comfortable win. The result heaped the pressure on great rivals Argentina, whose winless run in qualifying extended to four matches.

Edgardo Bauza's men rarely threatened despite the return of Lionel Messi, who was well contained by Tite's Brazil. It meant, under Tite, Brazil – who are top of CONMEBOL qualifying – have won five out of five. Coutinho struck with a stunner and Neymar scored just before the break to have Brazil in control, with Paulinho putting the Superclasico to bed just prior to the hour-mark. 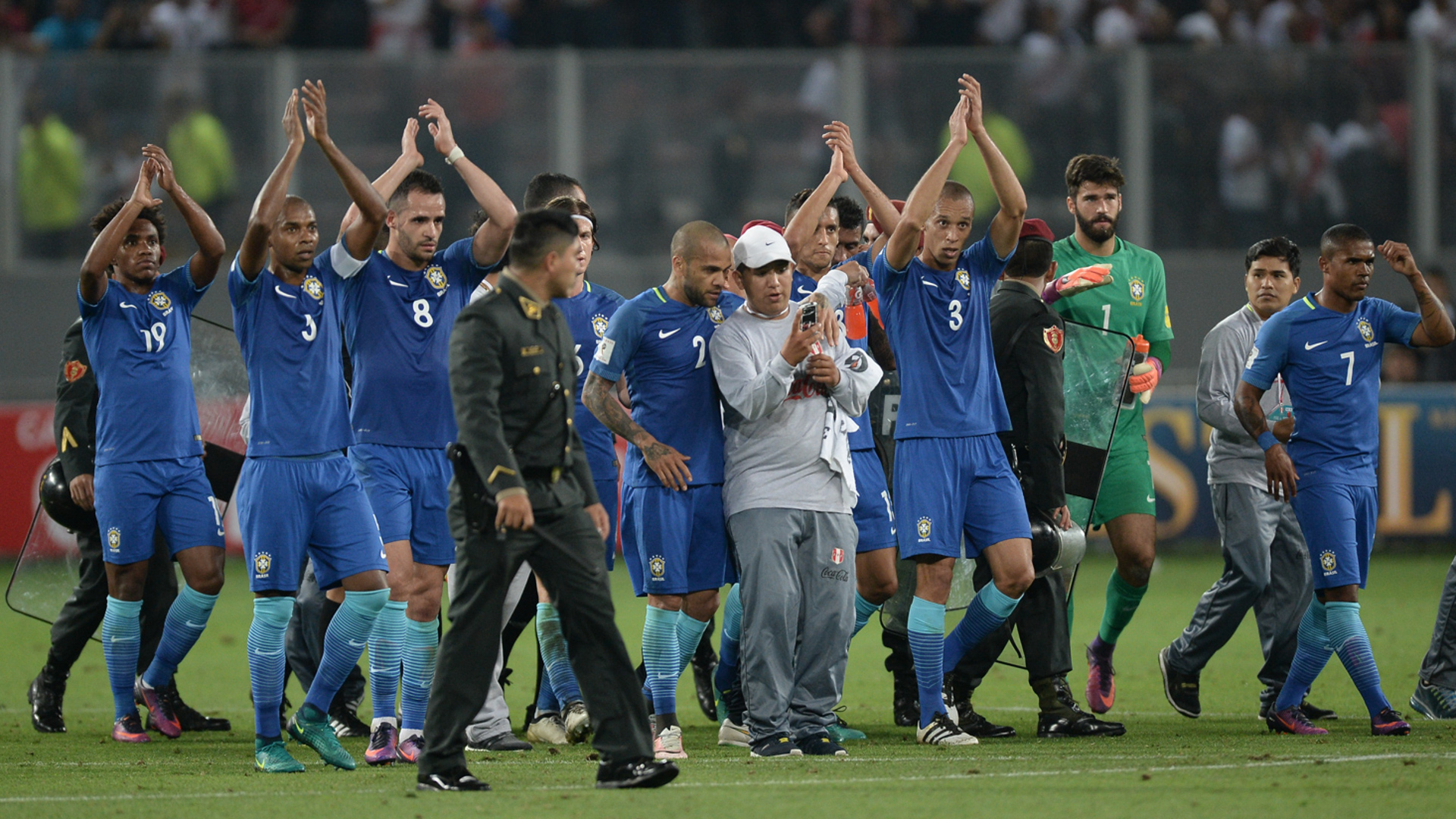 Brazil brought down the curtain on 2016 as Gabriel Jesus and Renato Augusto fired them past Peru. Manchester City-bound forward Jesus was the hero in Lima as Tite's Brazil made it six consecutive qualifying victories for the first time since trying to reach the 1970 World Cup.

Jesus, who only made his debut in September, hit his fifth goal of the year to draw him level with Philippe Coutinho as the Selecao’s top scorer in 2016.The 19-year-old turned provider 11 minutes from time, teeing up Renato Augusto to seal all three points. Brazil's win, coupled with Uruguay's loss in Chile, helped the South American giant move four points clear atop the standings after 12 matches 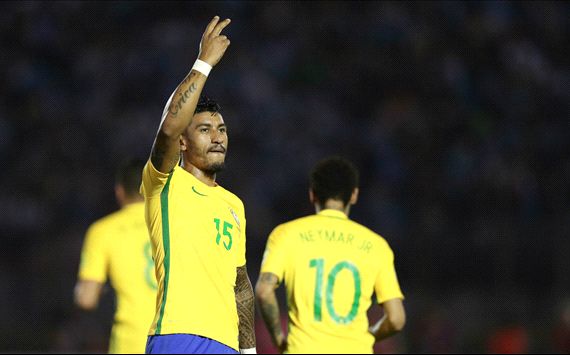 Brazil made it a perfect 7 in March when they travelled to Montevideo for what many ranked as the toughest test of coach Tite’s time in charge up to that point. The Selecao had never even gone behind under the new boss and prior to the match much of the speculation centred around how the team would react when they finally found themselves chasing the game.

Edinson Cavani gave the hosts a 10th-minute lead, but Tite needn’t have worried, as his side roared back to achieve a historic victory against their old rivals. Paulinho took the headlines, silencing anyone who still doubted his recall by netting his first career hat-trick, while an impressive Neymar grabbed the other. The victory also saw Tite make history as he became the first coach in Brazil’s glittering history to win seven consecutive World Cup qualifiers. Neymar was in fine form as Brazil booked their spot at next year's World Cup with a 3-0 win at home to Paraguay. Wearing the captain's armband for the first time since March last year, Neymar dazzled after scoring his 52nd international goal in Sao Paulo on Tuesday.

Philippe Coutinho opened the scoring 10 minutes prior to the break at Arena Corinthians, combining with Paulinho, before Neymar added a second in the 64th minute after missing a second-half penalty. And Marcelo sealed a ninth successive victory for Tite's CONMEBOL leaders with four minutes remaining, ensuring Brazil became the first nation to qualify for Russia 2018. 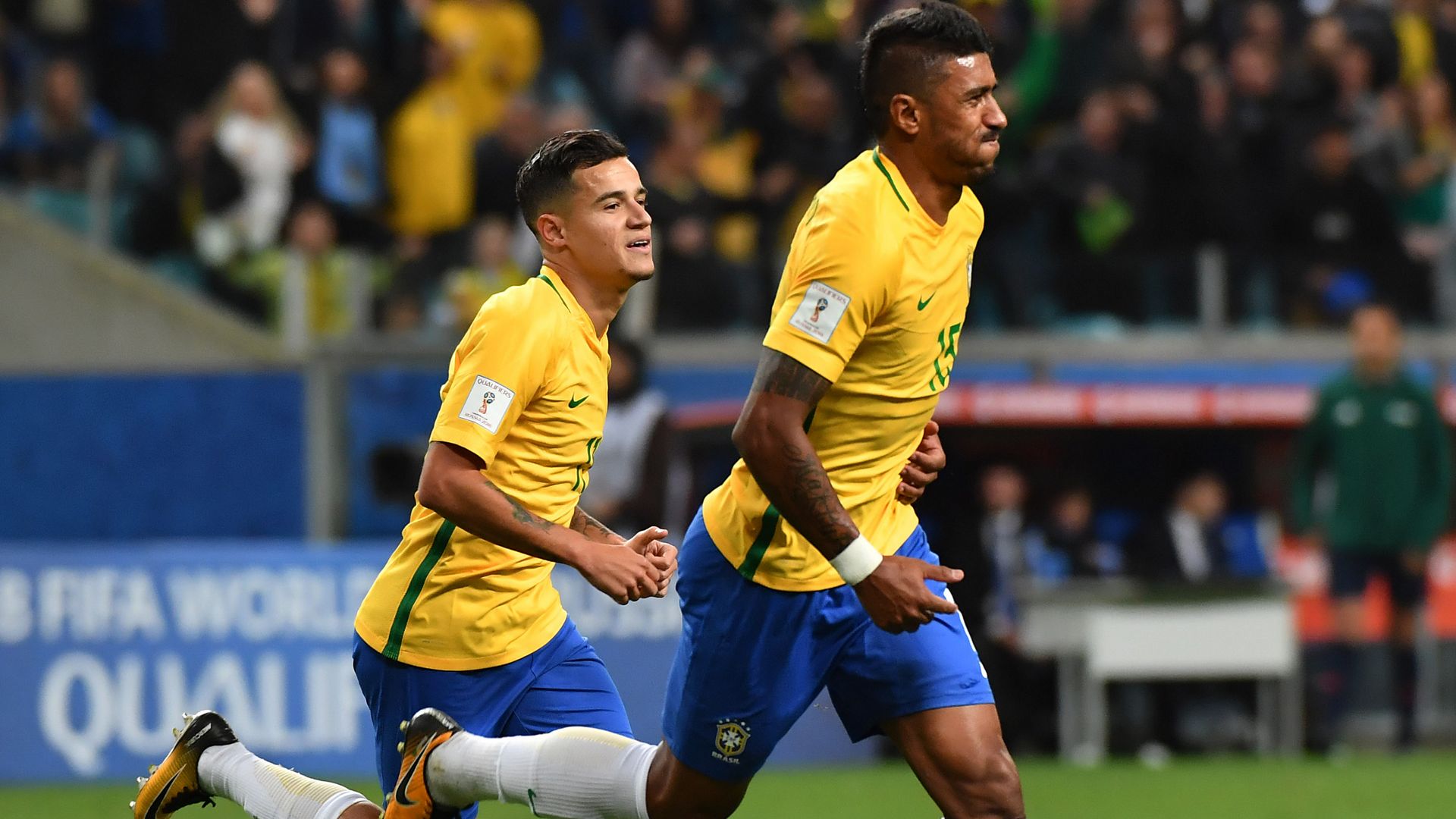 Having secured qualification for Russia 2018 back in March, Brazil guaranteed the CONMEBOL top spot with a ninth consecutive victory, this time over Ecuador.

The Selecao were made to work hard for their win. The visitors held out for almost 70 minutes and even had chances to sneak into the lead themselves, but ultimately it was the new scoring hero Paulinho who was left to break the deadlock with a smart finish after breaking free at a corner.

Coutinho doubled the lead shortly after when he combined brilliantly with Gabriel Jesus in the area, and Brazil were left with three more points that only increase expectations less than a year from Russia 2018. 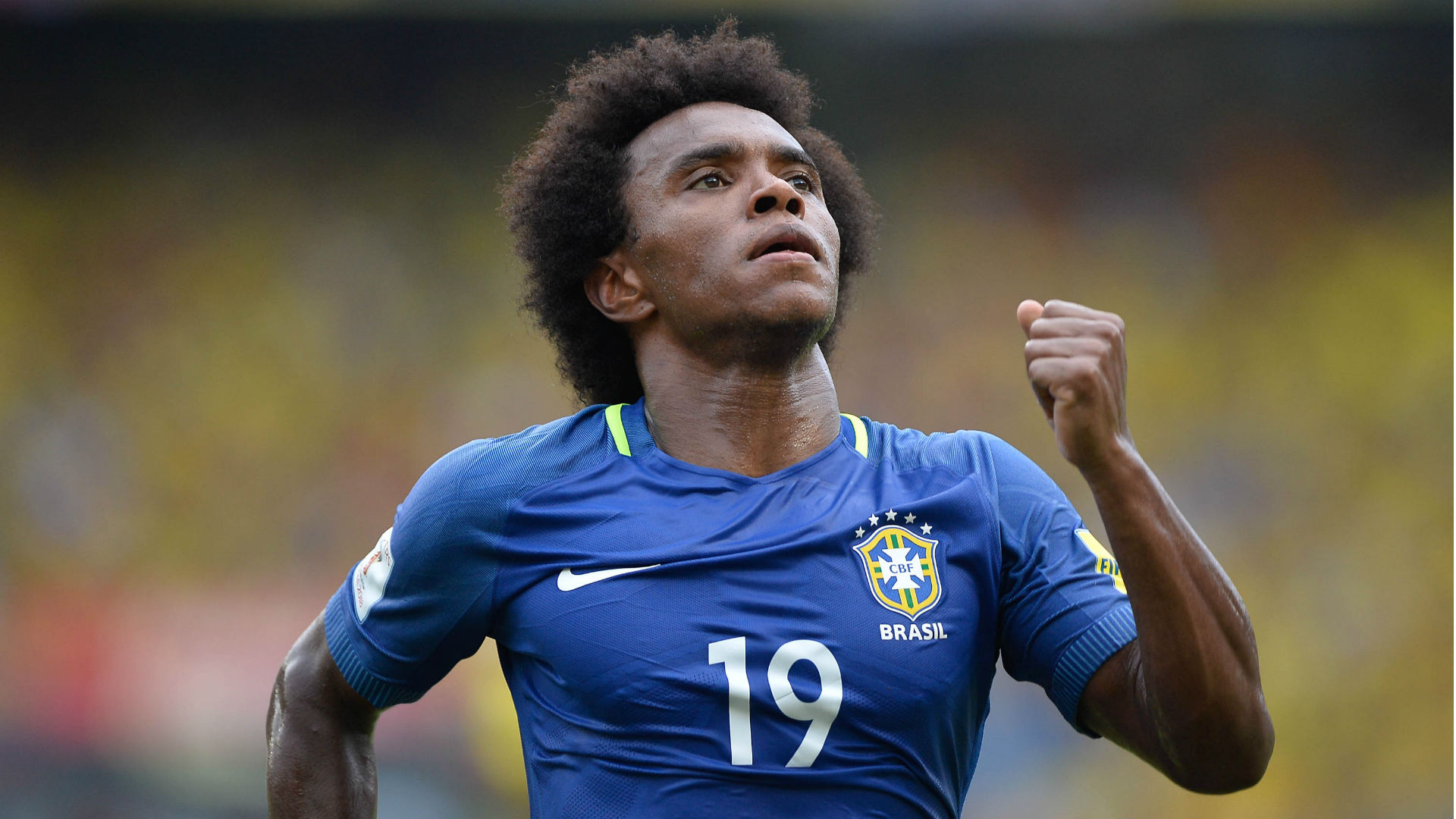 Radamel Falcao denied Brazil a 10th consecutive World Cup qualifying win and grabbed a vital 1-1 draw for Colombia in their own quest to reach Russia 2018.

In a tense 90 minutes in played in the stifling tropical heat of Barranquilla, Willian opened the scoring for the Selecao with a stunning shot from long distance.

Falcao, however, struck back, heading past Alisson to ensure his side a valuable share of the points. 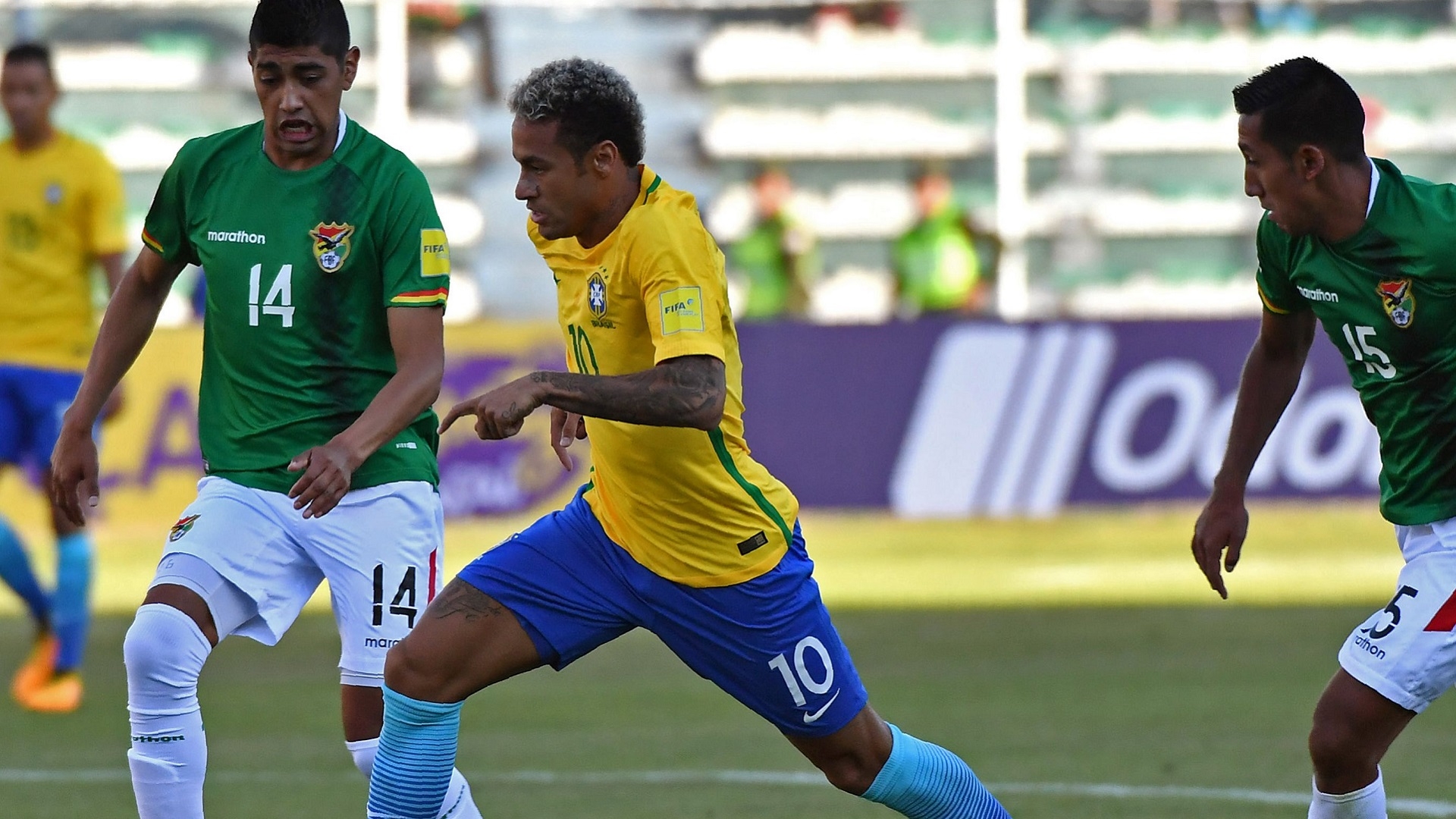 On the penultimate matchday of Conmebol World Cup qualifying for Russia 2018, Brazil ventured up to the dizzy heights of La Paz to face an already-eliminated Bolivia.

A stunning display by Bolivia goalkeeper Carlos Lampe denied Brazil all three points in an entertaining 0-0 draw at the Estadio Hernando Siles in La Paz.

The result had no bearing on anyone’s qualification hopes, but it did mean the Selecao would be unable to match the record points tally in qualifying set by Marcelo Bielsa’s Argentina ahead of World Cup 2002. 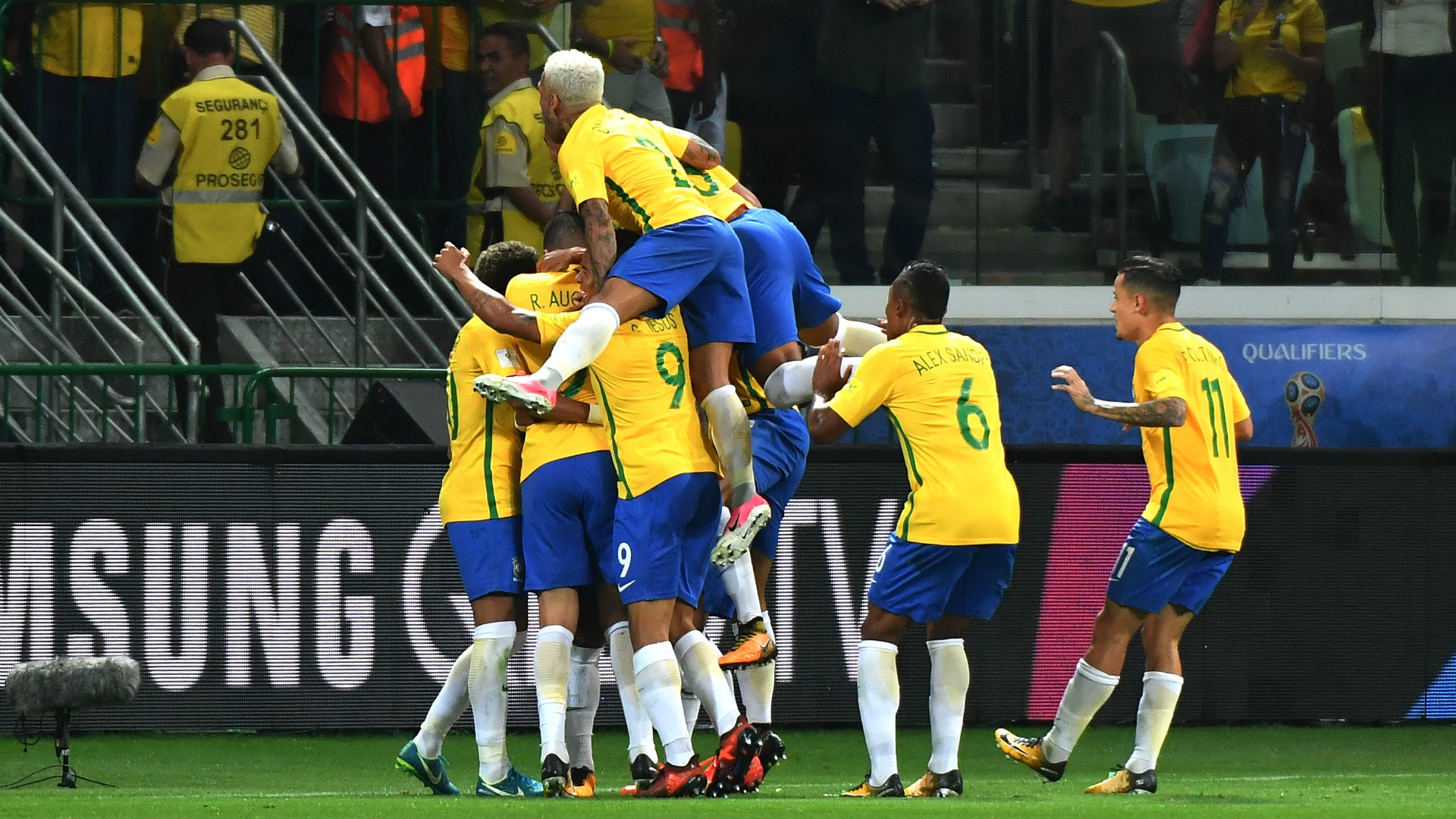 Brazil rounded off the campaign in style with a 3-0 win over Chile in Sao Paulo, a result that ensured la Roja missed out on a place at World Cup 2018.

Marquinhos returned to the starting line-up and was handed the captain’s armband for the clash. Paulinho and Gabriel Jesus struck in the space of three second-half minutes at the Allianz Parque.

Jesus than grabbed his second, and Brazil’s third, late on after when he walked the ball into an empty net after Chile goalkeeper Claudio Bravo joined the attack in search of a goal that might have saved the visitors.