When Chelsea faced up against Everton in the FA Cup quarter-finals, they were littered with star names.

Australian superstar Sam Kerr and Pernille Harder, the most expensive player in women’s football history, led the line, with Ji So-yun, who has won every trophy available in England, sat behind them.

On the bench, to name but a few, the Blues had Beth England, the club’s 2019-20 Player of the Year; Melanie Leupolz, the Bayern Munich captain signed over the summer; and Guro Reiten, Goal’s Women’s Super League Player of the Season.

However, two crosses into the box produced two Everton goals as a win for the Toffees made the absence of one player in particular become glaringly obvious.

With captain and centre-back Magdalena Eriksson out with a knock, Chelsea were incredibly vulnerable to Everton’s admittedly superb counter-attacks, and manager Emma Hayes knew it.

“We have a squad of players and it’s important for players coming in that they raise the bar and do that… I thought something was missing in our performance today.”

Jess Carter didn’t have a bad game in her place, but the commanding presence of the Sweden international is simply irreplaceable, no matter how many star names are in the attack.

In the two games since her return, that has become even more apparent.

Chelsea kept a clean sheet against Birmingham and conceded only to a Caitlin Foord worldie in a 4-1 win over Arsenal in midweek, restricting the Gunners to very few chances.

The opening scorer in that London derby? None other than Eriksson herself.

The skipper sending us into the lead last night! 😍 @MagdaEricsson 👊 pic.twitter.com/hiLtZdt34h

It was the latest in a string of important goals the 27-year-old has scored since arriving at Chelsea back in 2017.

The most important to date came against Sunday’s opponents, Manchester City, in a thrilling 3-3 draw back in February that would ultimately seal the WSL title for Chelsea, with the season curtailed due to Covid-19 shortly after.

As the Blues prepare for what is, even at this early stage, a potentially title-deciding fixture, Eriksson’s presence will be crucial.

“She just brings that leadership, even being younger, she shows it and demands it on the pitch,” Chelsea midfielder Drew Spence said earlier this year.

Eriksson is the first to admit she isn’t the most vocal leader, but one who leads by example.

Last season, her first as Chelsea skipper, Eriksson ranked third in the league for aerial duels won, with her centre-back partner Millie Bright one of the only two players above her.

She ranked seventh for clearances made, despite being part of the team that won the league and had the second-best defensive record.

She also didn’t miss a single minute of league action for the Blues. 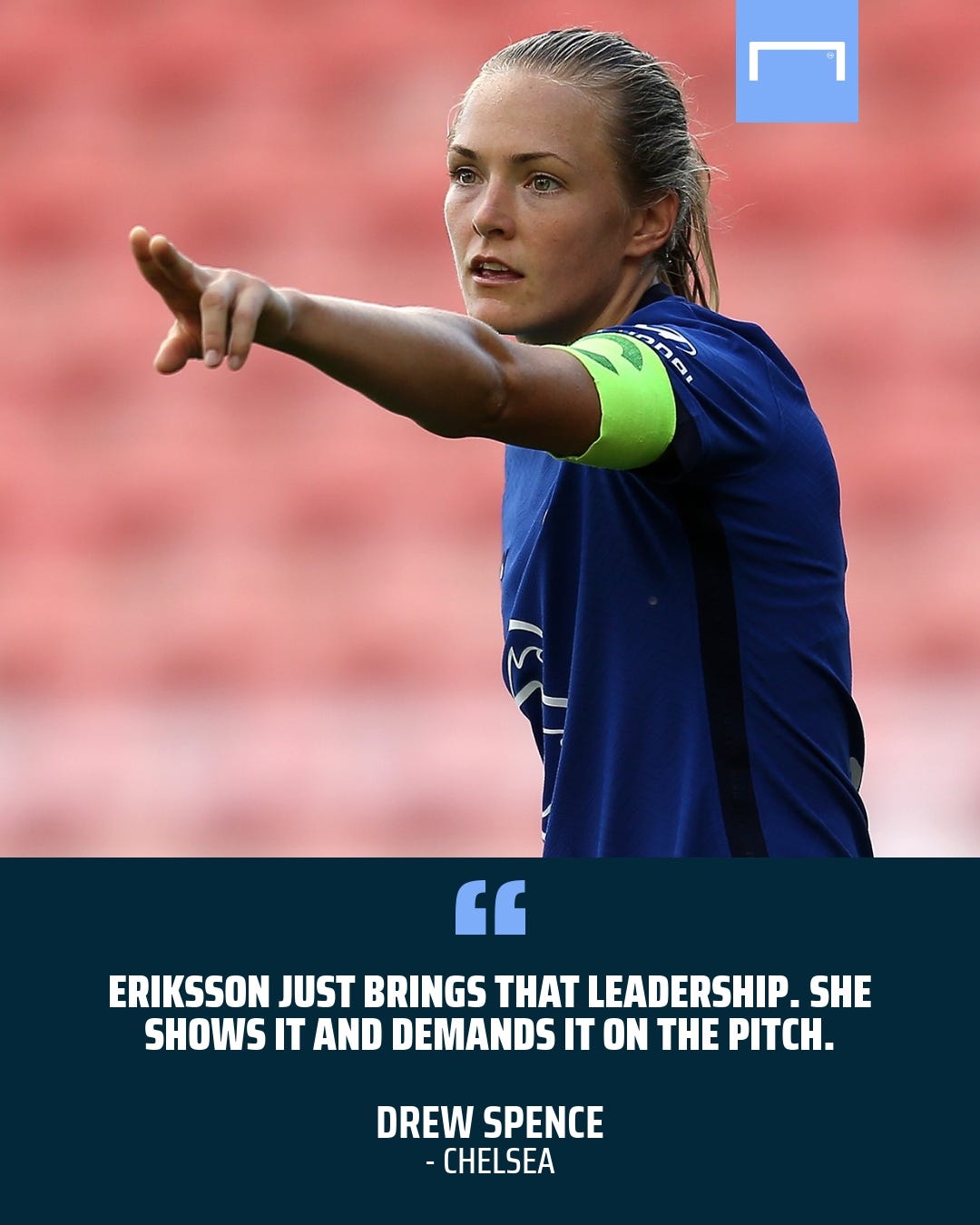 Her professionalism, her focus and her drive all influence the players around her and are massive for this team.

It’s something she showed in her time with Linkopings in Sweden, where she was also skipper and won a league title and two domestic cups.

Since arriving in England, she’s matured from the experience of playing in a new country and lifting plenty more trophies, becoming a greater leader in the process. All of that culminated in her being handed the armband last summer.

“I’m hoping it hasn’t changed me too much,” the Swedish defender said earlier this season, reflecting on a year as captain.

“I’m hoping that I was chosen to be captain for who I am. I think it’s just more that I’ve grown more comfortable in the role, in my duties as a captain in England.

“It’s a different culture around being a captain in England compared to Sweden, just those small things.

“The main thing for me has to be to look for more than just myself. I need to look after the whole team on the pitch, on the training field, not just myself. But I really enjoy doing that.”

This weekend, there will be a real onus on her to bring all of those qualities to the fore in a huge game.

With Man City really starting to click, and Chelsea flexing their muscles in that win over Arsenal, it could be another blockbuster encounter.

But the Blues showed how good they can be defensively in midweek by restricting the Gunners, the highest-scoring team in the league so far this season, to very little.

As the old saying goes, attack wins you games, but defence wins you titles.

Eriksson has won plenty of those since she arrived at Chelsea, and she could help her team gain an early upper hand in their bid for yet another on Sunday.