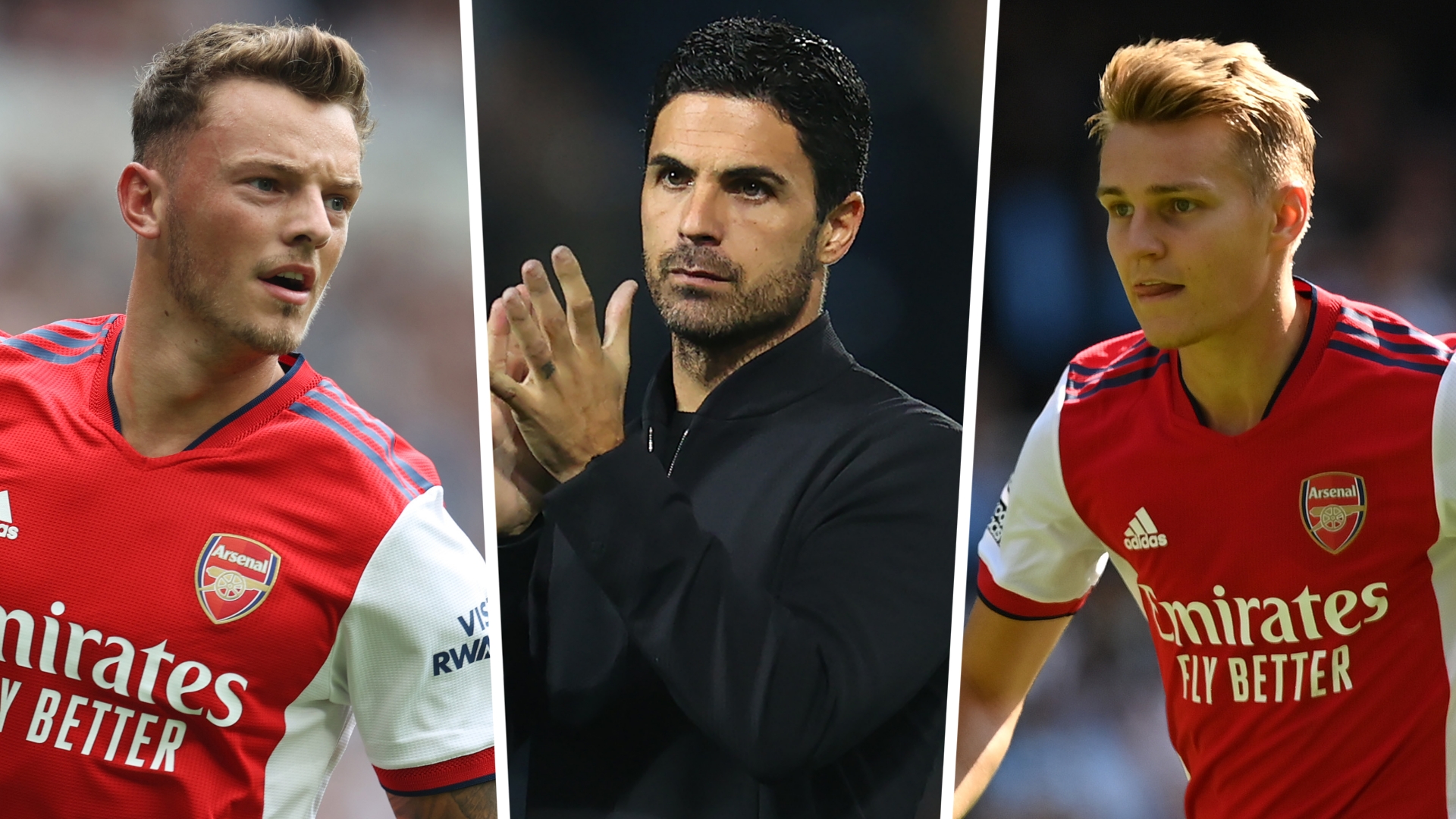 The Gunners have had a difficult start to the new Premier League season, but they now have some key players returning to action

It’s been a long time coming but Mikel Arteta is now very close to having his strongest possible squad to choose from.

We're perhaps not quite there yet, with doubts still hanging over a couple of players ahead of Saturday’s must-win meeting with Norwich City at Emirates Stadium.

However, with Thomas Partey, Gabriel Maghales and Ben White all now back in training and new signing Takehiro Tomiyasu in the building following his deadline=day move from Bologna, Arteta has more options than ever following a massively disrupted start to the campaign which has seen his side lose their first three Premier League games.

So, what will the Spaniard view as his strongest XI when he has everyone fit and available?

Whereas before there was no other option for the Gunners boss but to start with Bernd Leno, he now has Aaron Ramsdale available to him following his summer switch from Sheffield United.

The 23-year-old enjoyed an impressive debut during the 6-0 success at West Brom in the Carabao Cup second round, but found himself back on the bench for the game at Manchester City before the international break.

Despite conceding five at the Etihad, Leno is likely to keep his place as No.1 but the Germany international now knows that he has some serious competition at the club.

There’s no doubt that Ramsdale has been brought in to become Arsenal’s long-term No.1; it’s just a matter of when he takes over from Leno, who will have just one year left of his contract next summer.

For now, however, Leno remains the likely starter for Arsenal in the Premier League.

This is an area where Arteta has had to mix and match for some time now, with injuries a constant issue.

The lack of a first-choice right-back has also led to constant change, with Calum Chambers, Hector Bellerin and Cedric Soares all finding themselves in and out of the team, but the arrival of Tomiyasu just before the close of the transfer window gives Arteta the opportunity to finally field a regular right-back.

The Japan International may be an extremely versatile player thanks to his ability to operate on the left or in central defence, but he has been signed to play on the right of the back four.

And in Gabriel and White, Arteta now has a centre-back pairing which should go on form the bedrock of Arsenal’s defence over the next few seasons.

“They’ve both been signed since I was here,” Arteta said, when discussing the prospect of Gabriel and White starting together for the first time against Norwich.

“They have the profile and the qualities that we are looking for. Now, they need to establish a relationship. That cohesion in the backline is really important. They’ve never played together, but they will.”

Gabriel and White have the makings of a fine partnership, with White’s ability on the ball complemented well by Gabriel’s dominance in the air.

Should both stay fit, it’s likely that Rob Holding and Pablo Mari will have to make do with a place on the bench, if Arteta opts to play with a flat back four.

At left-back, Arteta has brought in Nuno Tavares and still has Sead Kolasinac to call upon, but Kieran Tierney is undoubtedly first-choice providing he is injury-free.

So, if everyone is available, Arteta’s back four looks set to consist of Tomiyasu, White, Gabriel and Tierney.

When fit, Thomas Partey will be one of the first names on Arsenal’s team sheet.

“He is a player that has to be one of the leaders,” said Arteta, when discussing Partey’s return to action.

”He has to be the boss in midfield and one of the senior players that has to carry responsibility out of the young players and lead. We have been missing that big time.

“He is a player that has that winning culture, because he has won a lot in the game already, and to have these kinds of players in the team is extremely important. So, he has got a huge role to play in the team.”

It looks like Partey will once again be paired with Granit Xhaka this season.

The Switzerland international almost left this summer and had he done so, Arsenal would have moved to bring in a new long-term partner for Partey.

But with Xhaka ultimately staying, he looks set to continue to be a key figure in midfield for Arteta, with Sambi Lokonga, Mohamed Elneny and Ainsley Maitland-Niles the senior back-up options in central midfield, with hugely talented youngster Charlie Patino waiting in the wings.

With Martin Odegaard now signed on a permanent basis from Real Madrid, the Norway international will take on a large chunk of the responsibility when it comes to creating chances.

Having arrived on loan in January, he fashioned more opportunities for his team-mates than any other player during the second half of last season and was a major factor in Arsenal’s upturn in form.

Arsenal’s struggles during the opening weeks of the current campaign have been clear for all to see, with Arteta’s side yet to even score a goal in the Premier League.

So, Odegaard’s return should improve things dramatically in that regard and providing he is fully up to speed, he should quickly become a certain starter.

What that means for Emile Smith Rowe remains to be seen, but Arteta is adamant the youngster and Odegaard can play together. It could be that Smith Rowe moves over to left to accommodate the former Madrid man, as he did plenty of times last season.

Arteta also has Nicolas Pepe, who finished 2020-21 in impressive goalscoring fashion and bagged himself 16 goals in all competitions, at his disposal.

However, the Ivory Coast international could find himself having to make do with a place on the bench more often than not, with Bukayo Saka, Odegaard and Smith Rowe a tempting proposition for Arteta in the three positions behind the striker in his preferred 4-2-3-1 formation.

In terms of the striker, Arteta has two senior options in Pierre-Emerick Aubameyang and Alexandre Lacazette, with Gabriel Martinelli, Eddie Nketiah and Folarin Balogun also in the picture.

Lacazette ended last season as top scorer and could still find himself being handed plenty of starts, with Aubameyang an option to play on the left-hand side of the attack.

But Arteta still views his captain as his main striker, so it would be no surprise to see Aubameyang spearheading the Arsenal attack in the big games, with his Carabao Cup hat-trick at West Brom proving he is still more than capable of scoring goals when chances come his way.