The world's most innovative club? The secrets behind Liverpool's Champions League opponents Midtjylland 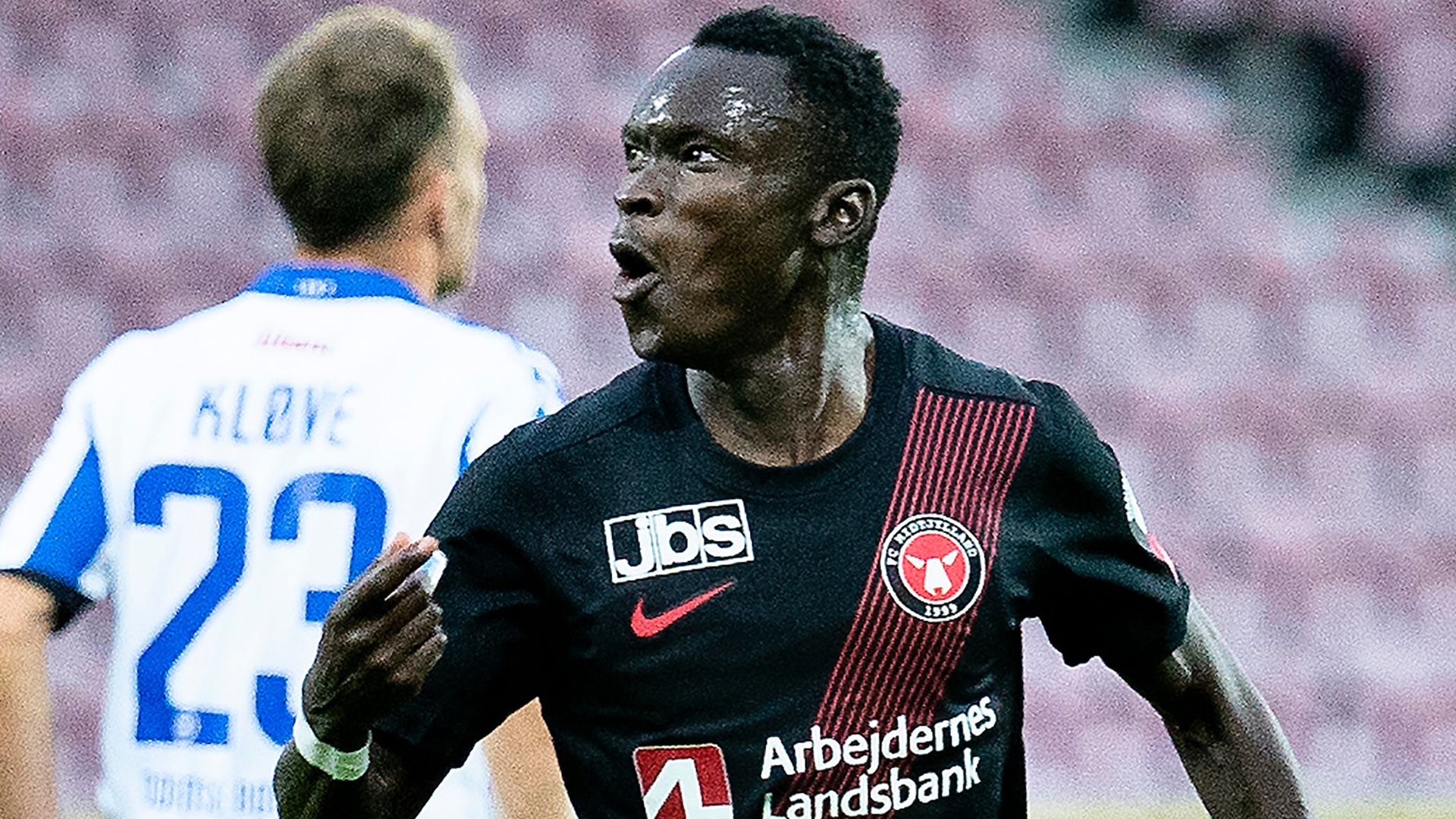 Ahead of their big night at Anfield, chairman Rasmus Ankersen speaks exclusively to Goal about the Danish champions' unique way of operating

And for FC Midtjylland, Tuesday night will be a case in point.

Liverpool at Anfield. It doesn’t get much bigger.

“Unbelievable, eh?” Midtjylland’s chairman, Rasmus Ankersen, tells Goal. “It’s something we have dreamed about and talked about, something we probably didn’t want to say out loud, you know? And now it’s happening…wow!”

It’s been some journey for Midtjylland, as Ankersen will go on to explain.

Forget what happens on the pitch, for a second. For this most remarkable of clubs, simply being here, dining at Europe’s top table, is an achievement that should be acknowledged, enjoyed and celebrated.

“We started from scratch,” Ankersen says of a club which boasts little by the way of 'tradition', founded as recently as 1999 as a merger between two local rivals, Ikast FS and Herning Fremad.

“We had nothing. We had no money, we were in the middle of nowhere in Denmark, from a town [Herning] of 50,000 people, with no tradition.

“It’s been an amazing journey, and it’s an unbelievable story, for sure.”

Ankersen has been there to witness every step of that journey. He was captain of the club's first ever youth team and later became a coach before, in 2014, returning as chairman.

Despite being only 37 years old, he is also a bestselling author, speaker and consultant, and serves as director of football at Championship club Brentford, who like Midtjylland are owned by the British businessman Matthew Benham.

Benham’s name, like his fortune, was made in the world of gambling. His company, SmartOdds, has become a market leader since its foundation in 2004, providing statistical research and sports modelling to clients across the globe.

His background means Midtjylland, like Brentford, are no ordinary club.

In fact, they are probably the most innovative football club in the world.

“I think we are quite unique, yes,” says Ankersen. “The mentality of the club is to do things differently, to explore new ways and to push things to the edge.

“There are a lot of people in the business world who speak about ‘innovative cultures’ and things like this, but at Midtjylland it actually happens.

“There is an open-mindedness here, and I think that comes from the fact we don’t have tradition.

“The people who are here now, they created the club. It was pretty much a blank sheet of paper. And so what we don’t have is a guy on the board who won the championship in 1975, who says we have to do things the way we did back then. It means we are always looking forward, not back.

“And when you are a club like we are, without oil in the ground, as they say, without natural privileges and resources, what are you going to do? It forces you to think differently, to innovate, to work hard. If we want to compete, even domestically here in Denmark, we cannot do what everyone else does.”

Compete Midtjylland most certainly have. Founded in 1999, promoted to the top flight a year later, and in 2014-15 – Benham and Ankersen’s first year – crowned champions for the first time.

The following season they reached the last 32 of the Europa League, losing to Manchester United but only after a memorable 2-1 win at their tiny, 11,000-capacity MCH Arena in the first leg. Two more titles have followed, along with a Danish Cup in 2018-19.

Their methods are unique. Data is king, and is used to drive Midtjylland’s decision making in just about every area, in particular recruitment, coaching and youth development.

Marginal gains are everything. Midtjylland were the first club, for example, to make use of Thomas Gronnemark, the ‘throw-in coach’ who now works with, as fate would have it, both Liverpool and Ajax. Gronnemark's impact at Anfield has been significant and his methods, as Ankersen explains, helped the Danes become one of the world’s most efficient clubs when it comes to dead balls.

“When Matthew and I came to the club, we thought that was a big inefficiency in football,” he says. “So we put a lot of time into it, and we had a lot of success.

“We hired specialists. We took inspiration from the NFL, which works a lot with these start-stop situations, and we hired a ball-striking coach.

“We had Thomas who helped us with our throw-ins, and over time we created what we call ‘the set-piece lounge’, where players, coaches, guys from the club would meet and discuss how we could take our set-plays to the next level. Brian Priske [the current head coach] was a big part of that when he was assistant manager. We were always looking for new ways, new ideas.”

Success has arrived in other areas, too. When it comes to the transfer market, for example, Midtjylland are known as one of the sharpest operators around. They have been especially successful with signings from South America - look out for left-back Paulinho, signed from Vasco da Gama, on Tuesday night - and have been able to pick up bargain signings from other mid-ranking European leagues as well.

“That has really become the financial engine of the club,” says Ankersen. “We have made some big profits in recent years, buying cheap and selling expensively.

“Alexander Sorloth is probably the best example. Alex cost us €400,000 from Groningen, and was sold to Crystal Palace for €12m a few months later. He’s now at Leipzig. We have had a few of those cases, where we have been able to find good value in the market and capitalise on that.”

Surely, though, that begs an obvious question. How do you keep doing that, when we know football is a world of resource and information, where good ideas are taken and imitated, and where, at the end of the day, money talks?

Basically, how do you not only get ahead of the game, but stay there?

“We always put ourselves in the shoes of the loser,” says Ankersen, passionately. He has written a book, Hunger in Paradise, which focuses on the idea of eliminating complacency in successful organisations.

“A lot of people talk about having a ‘winning mentality’, right?" he continues. "Well I think you need to think like a loser.

“When you lose, you have all the questions. You want to know how you can improve. But when you win, you always want to have the status quo. You expect your success to continue.

"So mentally, you always want to make sure that the organisation has not really arrived, that you have not really won.

“I’ll give you an example. When we won our second championship [in 2018], we felt we needed a bit more hunger in the organisation. So we created a new league table. It was not the Danish table, which we were top of. It was a table we put together using the rating numbers we had, from our analysis and our data model.

“It contained teams like Club Brugge, Salzburg, Slavia Prague, Basel, Valencia, Sevilla. Not the absolute top teams, but good teams in leagues across Europe, that we could aspire to compete with. And we said ‘this is our new league table’.

“We were rock bottom, but we said ‘this is the most important tool we use’. Can we improve, relatively to these teams?

“It’s not so much about the table, more the conversation that comes out of it. Because then the recruitment team are starting to think ‘how can we find better players, because we need to compete with these teams?’, the coaching team is wondering ‘how can we train more effectively, what new methods can we implement?’ They are thinking all the time, never relaxing.

“Even when we win, we always try to put ourselves in the shoes of the challenger. It’s about constantly remaining hungry, not becoming the fat cat which has reached the top of the mountain.”

It is a fascinating idea, though one can only imagine the derision it would attract among the traditionalists. Football, after all, is rarely quick to embrace new ideas, new methods, new ways of thinking. Witness, as exhibit A, the reaction to Liverpool’s appointment of Gronnemark in 2019.

“There is always resistance,” Ankersen admits. “But what is great with us is that what we do comes right from the top.

“When we evaluate players using data, for example, we are not doing it in the basement with two interns and a computer. It’s driven by the owner. It’s him who thinks it’s a good idea, and when an idea is driven from the very top then it is a lot easier to implement.

“Matthew is so open-minded. One thing I learned from him is that he’s always willing to change his mind if someone has a better argument. Even if it’s the most junior person in the room, he just updates his mental model and changes his mind accordingly.

“He’s all about creating a culture where the best argument wins, and not the person with the nicest business card or the loudest voice. That’s one of his big strengths.”

The conversation moves on to Tuesday’s game. Ankersen, unsurprisingly, speaks glowingly about Liverpool, as much for their work off the pitch as their success on it.

“What they have done is really a masterclass in how to run a football club,” he says. “They rarely make a bad recruitment decision, they are rational in their approach, they use data, they have a strategy and they always make sure that things are aligned around that strategy.

“My experience in football is that being successful is not actually about making a load of spectacularly good decisions, it’s about not making stupid decisions. Liverpool do not make stupid decisions, and that gives them an advantage already, because there are so many clubs who do, it’s unreal!”

We finish by talking about the game specifically. Who should Liverpool fans be looking out for in the Midtjylland side? Which players can we expect to see moving to one of Europe’s top leagues in the coming years?

“We have a very talented player called Frank Onyeka, who just got his debut in the Nigeria national team,” says Ankersen. “He’s a centre midfielder, very mobile, quick and aggressive.

“Then we have another player, Jens Cajuste, who is half-Swedish, half-American. He’s a player we found in the Second Division of Sweden a few years ago, playing for Orgryte, and I think he has the potential to play in the Premier League.

“Both of those players, in particular, should be watched. They are kind of the engine of the team. We play an aggressive pressing game and they drive that.”

Whatever happens, it promises to be a special occasion.

“I know that when that Champions League music starts playing, there will be goosebumps for sure,” Ankersen says.

“For everyone associated with the club, this is a special night.”