Gareth Southgate may not be able to get the best out of the right-back but Jurgen Klopp knows his true worth.

So, where do you stand on the great Trent Alexander-Arnold debate? An attacking genius, a defensive liability, or somewhere in between?

Everyone, it seems, has their opinion.

Franck Leboeuf is the latest to share his, the former Chelsea and France man pulling no punches in his assessment of Liverpool’s gifted but under-fire full-back.

Harsh? Just a bit, although Leboeuf’s suggestion, in the same interview, that Roberto Carlos had “deformed generations of defenders” shows he is no stranger to inflammatory, uninformed comments.

Certainly, Alexander-Arnold’s defensive capabilities remain a hot topic, even more so given Liverpool’s underwhelming start to the season, and the 23-year-old’s ongoing battle to play his way into the England team.

It has been another frustrating international break in that regard. An unused substitute in the defeat to Italy on Friday, Alexander-Arnold was left out of the squad entirely for Monday’s thrilling draw with Germany at Wembley.

A worrying development, to say the least, with Gareth Southgate set to announce his squad for the World Cup in less than six weeks, and with Reece James, Kyle Walker and Kieran Trippier seemingly locked-in.

In contrast to his Liverpool career, Alexander-Arnold’s Liverpool journey has been a story of mixed fortunes, of early promise followed by repeated frustration. 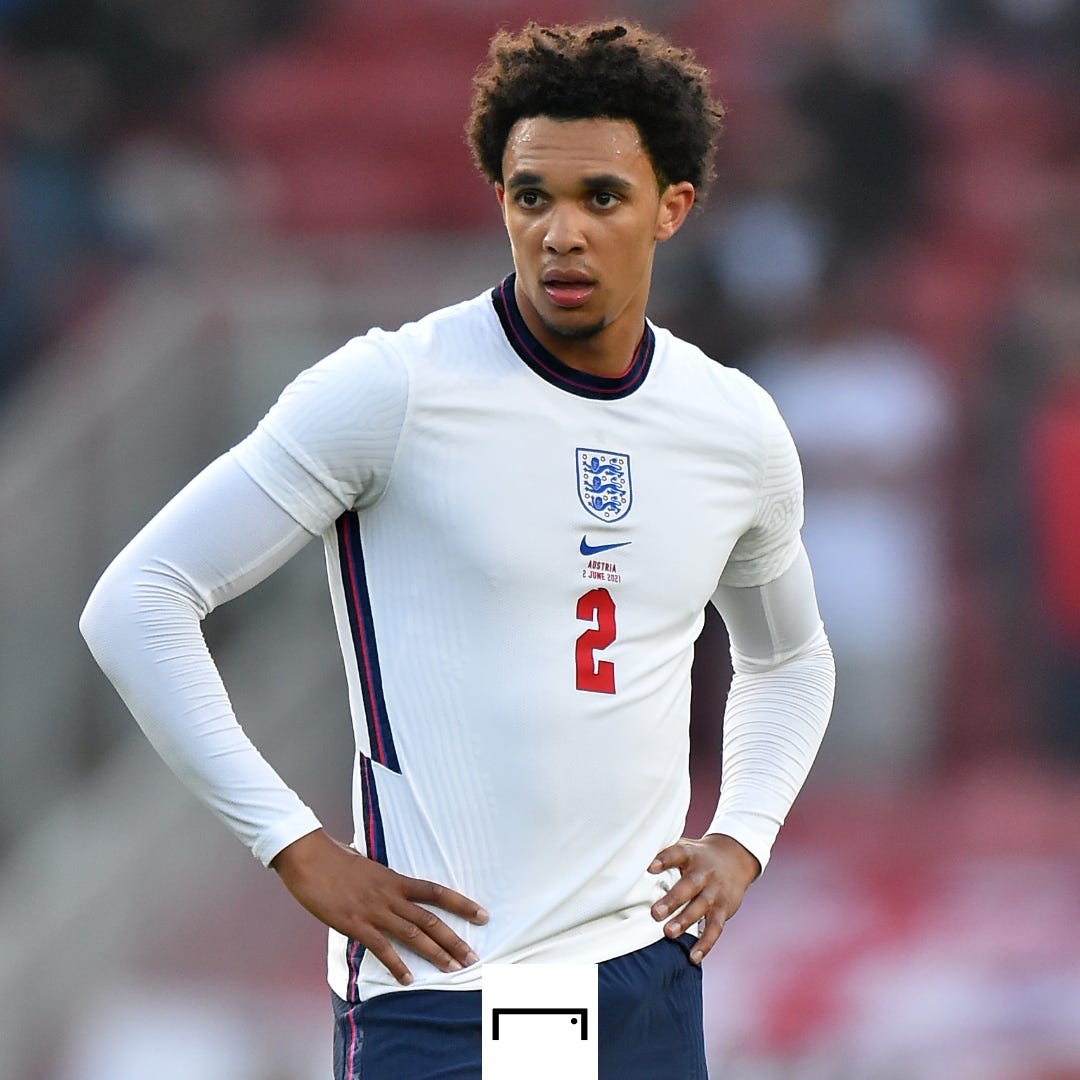 He made his debut and played in the World Cup as a teenager in 2018, scoring his first international goal soon after, but four years on has only 17 senior caps.

Far too few, for a player of such talent, one who has won every trophy there is to win at club level, who has been named in the PFA Team of the Year in three of the last four seasons, and who was shortlisted for the Ballon d’Or in August.

Southgate may not trust him – or, more accurately, may not know what to do with him – but there is no doubting Alexander-Arnold’s importance to Liverpool, even if he has, by his own high standards, been somewhat short of form recently.

“He’s one of the best players in the Premier League,” Glen Johnson, the former Reds defender, tells GOAL.

“What’s happened is that he has set the bar so high, that any time he’s not at his best, people are desperate to jump down his throat.

“People need to lay off him. Back off a bit, remember he’s still super-young and give him a bit of time to get back to his best. You don’t lose your class overnight, and Trent has loads of it.”

Much has been made of Alexander-Arnold’s apparent lack of defensive instinct or positional awareness, which can be exposed against quick, high-quality wide players, but Johnson speaks from experience when discussing the challenge full-backs face in striking the right balance between defence and attack. 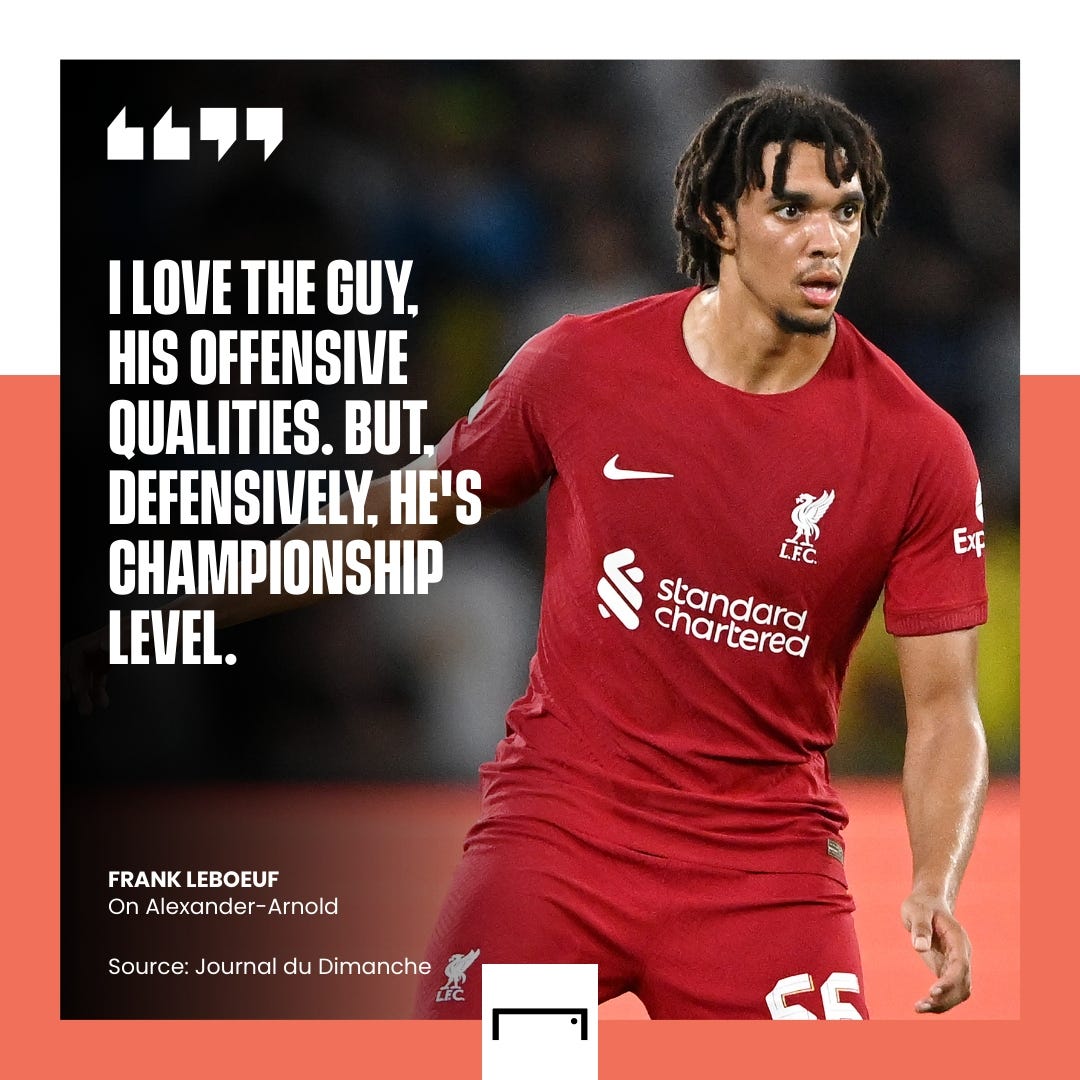 “Everybody is better at one or the other,” he says. “But we don’t want to see Trent sitting back like an old-style right-back, because then you lose all his amazing attributes going forward.

“It’s about learning the middle ground, and picking the right moments to really commit. Playing full-back has changed so much in recent years, but one of the other things that has changed is that every team has two or three players that will really look to expose you on the counter attack if you commit.

“And wingers nowadays, they stay up the pitch. Maybe in the past, if a full-back is getting forward, it’s making the wide man come back and mark him, but they don’t do that now. They just let you go, and that is when Trent needs to be clever, in terms of when to go and when to hold back. That’ll come with experience.”

There is a feeling among Liverpool’s coaching staff, and with Jurgen Klopp in particular, that Alexander-Arnold’s weaknesses are overstated.

“If anybody says that Trent cannot defend, then they can come to me and I'll knock them down,” the Reds boss said back in March, after watching Alexander-Arnold compete gamely against Arsenal’s Gabriel Martinelli in a 2-0 win at the Emirates.

“I cannot hear that any more, I don't know what more the boy has to do.”

Critics would point to the amount of goals which emanate from, or are scored, down Liverpool’s right. Aleksandar Mitrovic’s header at Fulham on the opening weekend of this season, perhaps, or Jadon Sancho’s opener at Manchester United.

Napoli had a field day down their left wing earlier this month, while going back to May, it was Vinicius Jr. in oceans of space at the far post to win the Champions League final for Real Madrid. 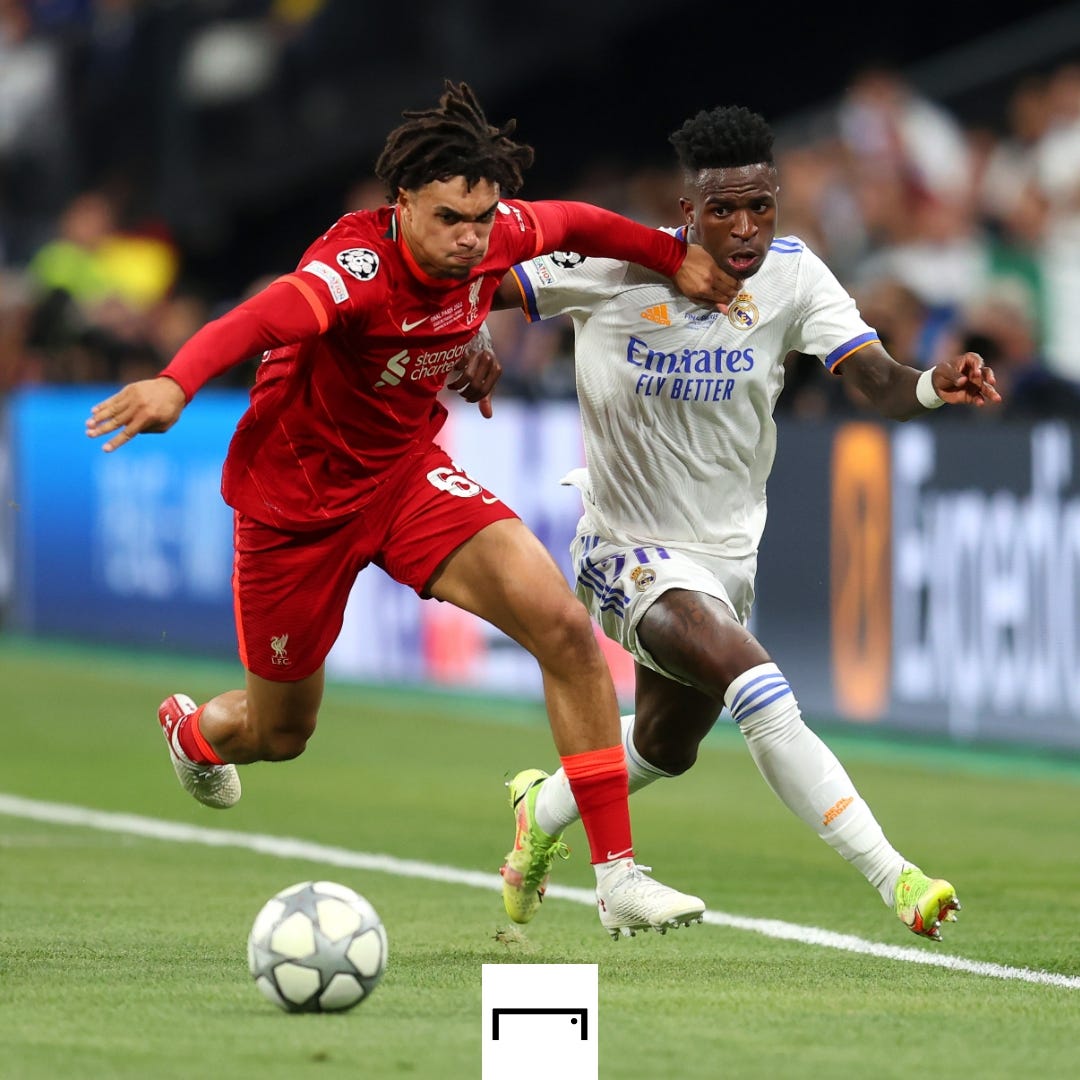 It is true that sides, generally, tend to probe more down Alexander-Arnold’s side than, say, Andy Robertson’s. Newcastle, for example, launched 61 percent of their attacks down their left flank at Anfield recently, while 56 percent of Bournemouth’s (admittedly minimal) threat came from the Liverpool right. Everton, United, Napoli and Ajax all looked to target Alexander-Arnold with more than 40 percent.

The real question is how much does that matter?

Liverpool, don’t forget, conceded only 26 goals in the Premier League last season, the same total as champions Manchester City. They have had the best or joint-best defensive record in three of the last four campaigns, and for all their ‘struggles’ this time around, only Brighton have conceded fewer goals in the league.

If Alexander-Arnold is ‘Championship level’ defensively, as Leboeuf claims, then the rest of his team must be damn good to compensate.

And he’s certainly not Championship level in an attacking sense, which is where his real value to Liverpool lies. His passing range, vision and set-piece delivery are all of the highest quality, and mark him out as unique among players of his position.

“The playmaking full-back,” as UEFA put it when voting him into the Champions League team of the season in May. Southgate, funnily enough, was among the ‘technical observers’ to have helped make that call.

Alexander-Arnold may be yet to register an assist this season, having managed 18 in all competitions last term, but his underlying numbers suggest it won’t be long before that is rectified. 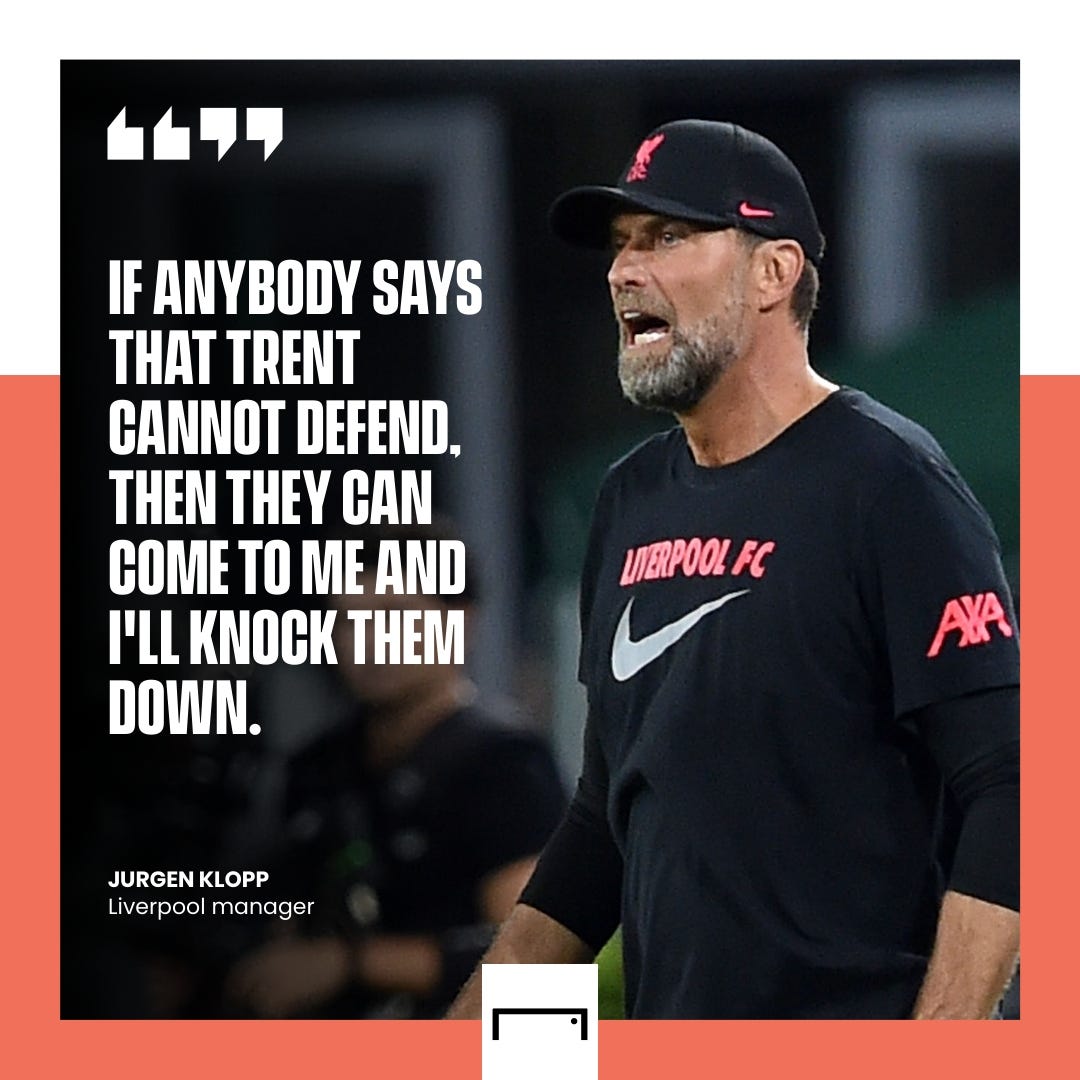 Liverpool’s attacking game may be a little off right now, but it still revolves heavily around their right-back, and that certainly won’t change any time soon.

In fact, we should expect Klopp’s side to improve significantly in the coming weeks, where the presence of Thiago Alcantara, Fabinho and Jordan Henderson should provide a more balanced midfield, where Mohamed Salah will click back into top gear and where the fit-again Joel Matip should offer greater stability alongside Virgil van Dijk.

All of those factors should benefit Alexander-Arnold, while the looming presence of the World Cup provides extra motivation, as if it were needed.

Remember his response the last time he was dropped by Southgate, a few months before Euro 2020?

He knuckled down, played himself back into form, helped Liverpool finish the season strongly, and had it not been for a thigh injury suffered on the eve of the tournament, he’d have been part of the squad which made it all the way to the final.

Don’t rule out a similar resurgence this time around, either. Form is temporary, class is permanent, as they say, and few players in world football have as much of the latter as Alexander-Arnold.

If Southgate can’t see that, then Liverpool most certainly can. England's loss can be their gain.