From creating your team to using your wildcard, GOAL lists everything you need to know about Fantasy Premier League for the 2022-23 campaign

The start of the 2022-23 Premier League is fast approaching and excitement is building for a new season of fantasy football.

While there are plenty of fantasy football games available online, the Fantasy Premier League (FPL) is undoubtedly the most popular and offers users the chance to battle it out with their friends and rivals across the globe.

So, whether you're a seasoned veteran of FPL or a beginner just starting to get to grips with the game, GOAL's guide offers everything you need to new ahead of the new campaign.

How do you register a team for Fantasy Premier League 2022-23?

Once you've entered the necessary information and, if applicable due to age restrictions, arranged access with a parent or guardian, you'll be able to choose a team name and then it's time for the most enjoyable part - picking your players!

Each FPL manager is then assigned a budget of £100 million and must pick a total of 15 players: two goalkeepers, five defenders, five midfielders and three forwards. You are limited to a maximum of three players from each Premier League team.

You have unlimited transfers right up until 6:30pm (1:30pm ET) on Friday, August 5 - an hour-and-a-half before the first Premier League game of the new season - and there is an 'Auto Pick' option if you want the game to select a full squad for you. 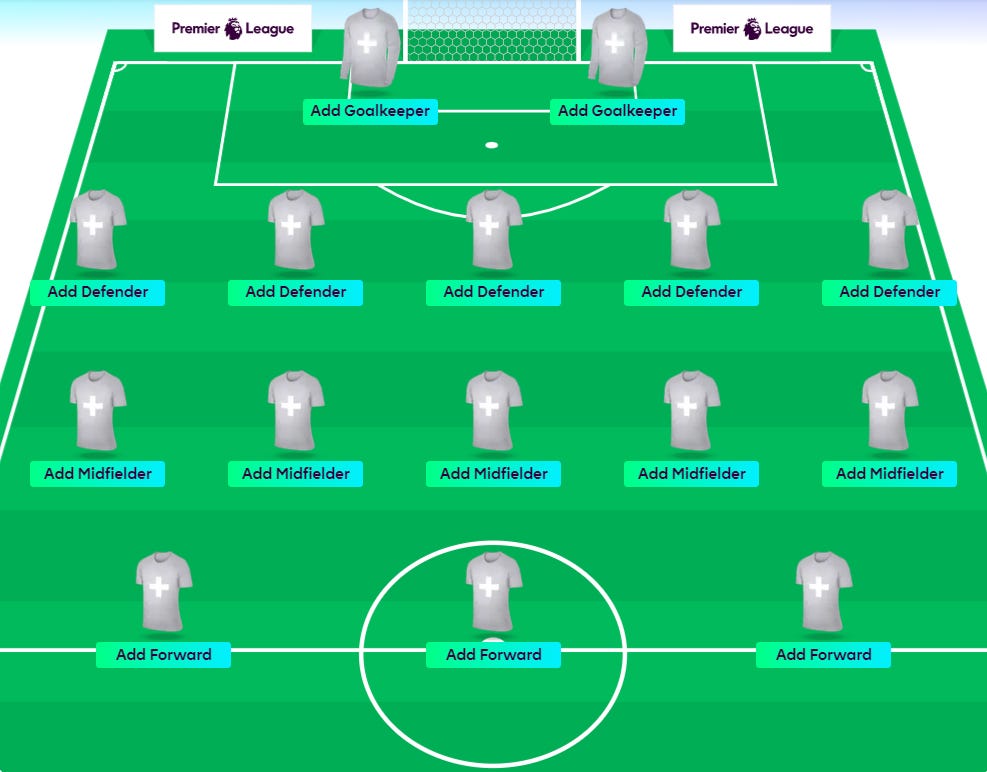 How do you play Fantasy Premier League & what are the rules?

The basic aim of Fantasy Premier League is to accumulate as many points as possible across the entire 2022-23 season.

From your squad of 15 players, you must select a starting XI for each 'Gameweek' - more on that later - and they will receive points based on their performance in each fixture.

You can put your team in any formation although there must always be one goalkeeper, at least three defenders and at least one forward selected at all times.

It is also important to arrange the order of your substitutes' bench, as the game will automatically substitute a player in if one of the players in your starting team doesn't play in the gameweek.

You are also required to select a captain, and vice-captain ahead of each gameweek.

The captain of your team will receive double the amount of points, while the vice-captain is a back-up choice in case your original selection doesn't play, and thus the double points will be awarded to the alternative pick.

You will automatically be entered into various 'general leagues', including a fan league, based on the team you support, a country league, a 'Gameweek' league depending on when you signed up, and an overall league.

There is also the possibility to create an invitational mini-league, both in classic or head-to-head style, to allow you to play against friends and family.

Alongside the standard league format, FPL teams are automatically entered into the cup, with the start date determined by the total amount of players that enter the game.

There are no restrictions as to when you first enter your team although, in the interests of fairness, you are limited to having one team per person.

A full list of rules and FAQ's can be found on the official Fantasy Premier League website.

How is fantasy football point-scoring determined?

Points are awarded to each player based on their performance in a match, with the following criteria being applied:

No need for two expensive goalkeepers

As only one of your two goalkeepers will be able to play each week, aim for your regular starter to be a player worth £4.5m+, such as Alisson (£5.5m), Ederson (£5.5m), or Edouard Mendy (£5m), and ensure your back-up is one of the cheapest £4m players.

Have a strong bench

Make sure you have at least two decent players on your bench, goalkeeper aside. There will be times when members of your starting XI are unexpectedly injured or dropped, so it's important to have players in reserve that you can be confident will be picked in a Gameweek and can automatically step in.

After each Gameweek, certain player prices will increase or decrease depending on their popularity among the FPL community, related to transfer activity. If you're certain you want a player in ready for their next game, it's best to make the transfer early to avoid them going up in price and thus eating away at your budget.

As much as beating a price rise can be important, it's arguably a better idea to wait until the last possible moment to make your team changes before a Gameweek starts. That allows for team updates from managers in press conferences and gives you a clearer idea of which players from your team, or those that you plan to transfer in, will be playing or not.

Over the first few Gameweeks it will become clearer who's starting, and who's in form, in the Premier League. There may be some surprises and a bargain or two to be had a result, with Jarrod Bowen (£8.5m) being a perfect example having been priced at just £6.5m at the start of last season before he delivered a hugely impressive 206 points.

Some @OfficialFPL price reveals for you! 👀

Who makes it into your team?! ⚒ pic.twitter.com/DmpwtuKX5B

It's useful to know who takes free-kicks and penalties in the Premier League.

Defenders are particularly appealing here, with Trent Alexander-Arnold (£7.5m) being a prime example of a player who regularly takes set-pieces and is thus capable of big point-scoring Gameweeks.

If you're serious about doing well in FPL in the 2022-23 season then your captain picks are going to be vital. Your skipper will score double points during every Gameweek and be sure to always select from your strongest players with favourable fixtures.

Use your wildcard wisely

The temptation may be to activate it straight away, potentially after a disappointing first week or two of the season, but try not to make a rash decision and only use your wildcard when you're sure you need to overhaul your squad, and certainly not when you're only looking to make one or two changes.

Don't forget about your chips

It goes without saying but don't waste the chance to use all chips available. This is particularly important if you still have some left towards the end of the season as, for example, you can't use a wildcard and a triple captain in the same Gameweek, you're only able to use one at a time.

What are bonus points & how are they calculated?

Bonus points are awarded to the three 'best'-performing players in each Premier League match.

The official definition provided by the FPL website reads: "The Bonus Points System (BPS) utilises a range of statistics to create a BPS score for every player.

In the event of a tie, between either first, second or third place, the points will be divided accordingly. For example, a tie for first place will see Players 1 and 2 awarded three points each, with Player 3 receiving one point.

For a full explanation of what happens in the event of a bonus-point tie, as well as the Bonus Points System used by FPL and how it works, a full breakdown can be found via the 'Rules' section of the official website.

What is Fantasy Draft and how is it different?

There are 15 draft rounds in total to allow each player to have a full 15-man squad, with a random order initially generated which will then 'snake' from round to round, with the draft pick order reversed each time.

During each round, the FPL manager will have between 30 and 120 seconds, with the default being 90 seconds, to pick a player to join their squad. A failure to pick a player within the time limit will result in a player automatically being assigned.

After the draft has taken place there is the opportunity to bring in unassigned players via waiver requests. Depending on the settings assigned to your league, there is also the chance to trade players with fellow FPL managers.

For a full explanation of Fantasy Draft, the rules and how it works you can head over to the official Fantasy Premier League website.

Who are the best players to pick in fantasy football?

Each registered Premier League player from the 20 teams in England's top-flight league is assigned a price, with the top-value players considered to be the 'best' and most likely to score the most points over the season.

The most expensive player on the game is Liverpool forward Mohamed Salah, who is available for £13 million - an increase of £0.5m from 2021-22.

Indeed, midfield and forward players make up the bulk of the most expensive assets on the game, with the highest-valued defender being Liverpool right-back Trent Alexander-Arnold (£7.5m).

As for the highest-priced goalkeepers, there are three who are valued at £5.5m; Alisson, Ederson and Hugo Lloris.

The most expensive forwards in the game, meanwhile, are Tottenham striker Harry Kane and Manchester City summer signing Erling Haaland, who are both £11.5m.

To help you out, we've compiled lists of the best players for each position:

How many Premier League goals will Erling Haaland score next season? 🇳🇴 pic.twitter.com/xp6jgU4nDC

What is a 'Gameweek' & when are the deadlines for transfers & changes?

A Gameweek essentially refers to the Premier League matches that will be played during a specific timeframe, with the most common gameweek seeing 10 matches played, and all 20 Premier League teams involved.

There are, however, exceptions, with there being specific weeks where a team may have more than one match counted as part of a gameweek, while other sides may not have a match to play at all.

There will be a total of 38 gameweeks played over the 2021-22 Premier League season, with the first getting underway on August 5.

Associated with gameweeks are deadlines, where you must have all your transfers and team changes made before a set day and time.

What are 'Chips' in Fantasy Premier League?

Each team is allocated chips that can be used during the 2022-23 Premier League season to aid and enhance performance and point scoring. They are:

Bench Boost allows a team to receive points for their starting XI and substitutes, and can be used once a season. Free Hit, meanwhile, gives the FPL manager the chance to make unlimited transfers to their team for one sole gameweek.

A Triple Captain chip can also only be used once in the season and means that the player selected as your captain will score three-times the amount of points for a single gameweek.

The Wildcard chip can be used twice in a season - the first before before November 12 and then the second after December 26 - and allows unlimited transfers to be made.

FPL have also announced there will be unlimited free transfers between November 12 and December 26, due to the 2022 World Cup taking place in Qatar.

What prizes can you win in Fantasy Premier League?

There are various prizes available across the 2022-23 season for those teams who perform well.

The grand prize for finishing in first place in the overall Fantasy Premier League standings of all global players is a seven-night break in the UK including VIP hospitality at two 2023-24 Premier League matches.

Other prizes are also awarded to that individual including a Hublot connected watch, a copy of FIFA 23 and a laptop computer or SIM-free smartphone.