Brazil has a rich history when it comes to attacking full-backs. Whether it is Carlos Alberto, Cafu or Roberto Carlos, the Selecao's wide defenders have played key roles in the country's World Cup successes down the years.

Even those who have not won major honours on the international stage leave their mark. No player in the history of the game is more decorated in terms of club success than Dani Alves - a player who many regard as having revolutionised the role of the right-back over the past decade.

Now, with the Barcelona legend winding down his career in his homeland with Sao Paulo, Brazilian football fans are on the lookout for the 'new Dani Alves'. In 17-year-old Yan Couto they may well have found him.

Born just days before the start of the 2002 World Cup, which a Ronaldo-inspired Brazil would go on to win in South Korea and Japan, the teenager has enjoyed a rapid rise to prominence over the past 12 months. So much so he now finds himself at the heart of a transfer battle between two of Europe's richest clubs.

Barca have never truly replaced Dani Alves, and as such the promise of an heir put the Camp Nou hierarchy on alert. Reports in Brazil midway through the January transfer window suggested a bid of €5 million from the Blaugrana had been accepted by the youngster's club, Coritiba.

However, as reported by Goal, it is Manchester City who look to have won the race for the flying full-back - nicknamed 'The Flash' due to his lightning speed - with the move likely to be completed when he turns 18 in June. Reports of a €14m (£12m/$17m) fee having been agreed are understood to be wide of the mark, but Barca insist they are no longer in the running given how close City are to reaching an agreement to sign a player who also has admirers at Arsenal and Bayer Leverkusen.

Couto joined the Coritiba academy at the age of 10, where it quickly became clear that he possessed quick-thinking with the ball at his feet along with the skills to beat opponents having played futsal as a child, much like another Coritiba graduate and former Fenerbahce playmaker, Alex.

Once playing regularly on the grass, he was able to increase his physical power - an attribute that has allowed him to stand out among his peers. Couto cites Cristiano Ronaldo as one of his heroes and as such is so obsessed with the Portugal star's prowess that he admitted in an interview with the CBF's website that he would be studying physical education were he not about to set off on a footballing career. 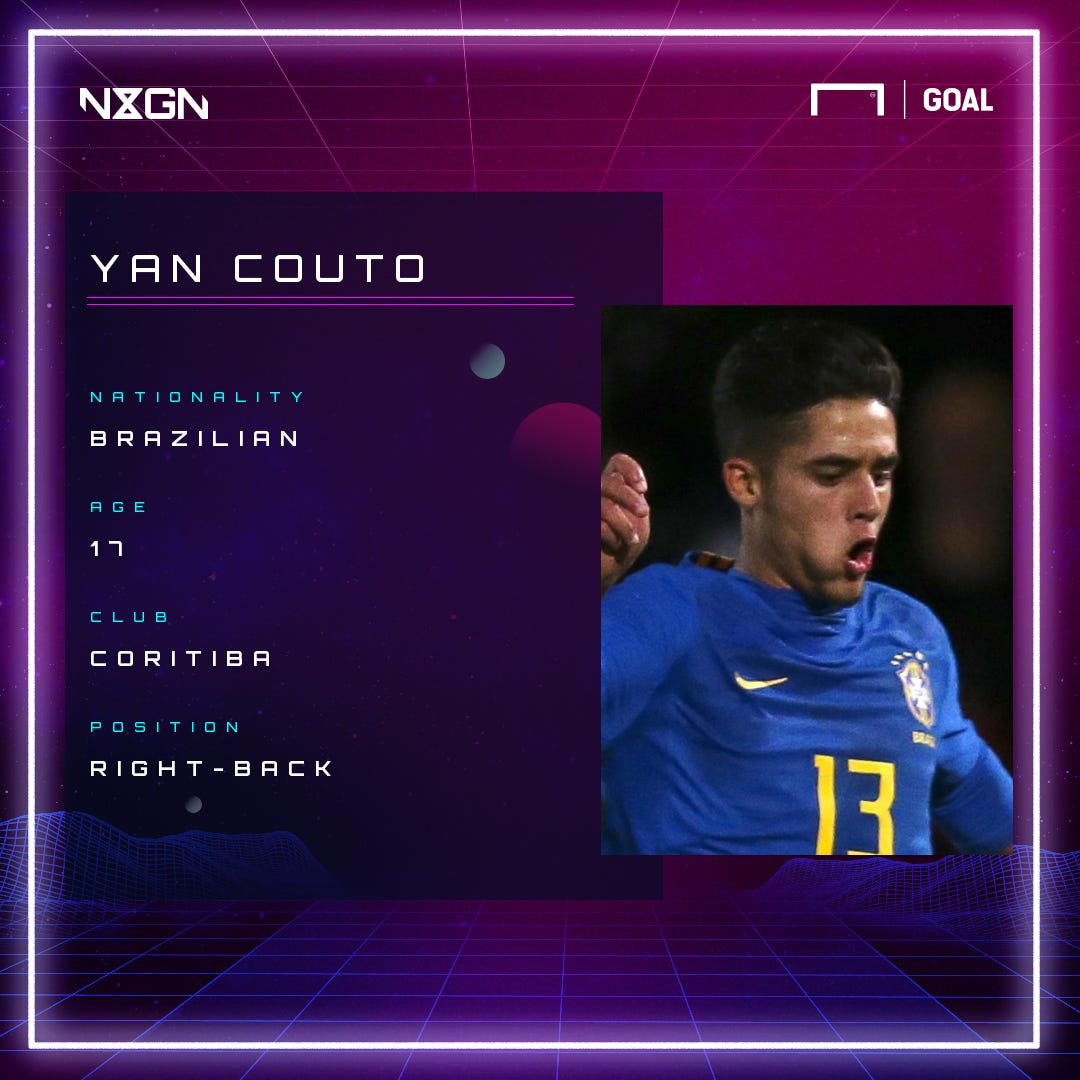 As well as Ronaldo and Alves, Couto also lists former Barcelona utility man Adriano and ex-Bayern Munich star Rafinha among his idols, with both having begun their careers as full-backs at Coritiba. Neither, though, made the impact Couto did at international youth level, with the 2019 Under-17 World Cup the stage the right-back used to showcase his talents to the wider world.

No defender created more chances in the tournament than Couto's 10, with his inch-perfect cross three minutes into second-half stoppage time providing the assist for Lazaro to volley home the winner as the hosts came from behind to beat Mexico 2-1 in November's final.

“It leaves a mark, right? Those crosses, these plays in the game - it was the goal that won the title. I will always remember it," he told Coritiba’s YouTube channel upon his return from the competition.

At the other end of the pitch he was just as effective, recovering the ball on 33 occasions across seven matches - a total that was only bettered by one other Brazil player.

Despite those performances he is yet to make a senior appearance for Coritiba, who had hoped that they would be able to extend his contract. The wait for him to come of age means he may well make his first-team bow before he heads to the Etihad Stadium at the end of the European season, but either way it is clear that he possesses a special talent.

Quite whether he can repeat the successes of those full-backs that have come before him remains to be seen, but in City he has found a landing spot that is primed to nurture him into one of the very best.