The 17-year-old is quickly making a name for himself in the French capital, with both Manchester City and RB Leipzig casting admiring glances

As an undermanned PSG fought back from falling 3-0 down to Ligue 1 strugglers Amiens on Saturday, one player's name appeared in headlines for the first of what is likely to be many occasions, albeit not for the reasons many would have predicted.

Tanguy Kouassi's brace of headers to help the French champions eventually claim a point in a 4-4 draw showcased his aerial ability and superb physicality, particularly for a player who will not turn 18 until June. But, as with a number of modern centre-backs, it is his ability with the ball at his feet that has most caught the eye.

So good is Kouassi when in possession that he was trusted to make his PSG debut against Montpellier in December as a central midfielder. Four days later he was deployed in the same role as he became the youngest player to represent the Parc des Princes outfit in the Champions League when starting against Galatasaray, breaking a record previously held by Adrien Rabiot.

For a teenager who had only once played that position during his time with the club's Under-19s, he excelled. From there he has become a regular in Thomas Tuchel's matchday squad, earning a total of eight starts to go with three substitute appearances, albeit he has more recently found himself back in the familiar surroundings of central defence.

Born in the northern French town of Epinay-sous-Senart, Kouassi's footballing education began at the age of six as he joined local club FC Epinay Athletico, with his natural ability clear from an early age.

"Tanguy, for his age, was already strong and mature," recalled one of his first coaches, Bayokila Ntoumba, in an interview with So Foot. "He was comfortable with the ball, very serene."

After a short spell with another local side, US Senart-Moissy, Kouassi eventually joined Pays de Fontainebleau - who previously boasted a young Lillian Thuram - as an 11-year-old. It was there where he caught the eye of PSG, who eventually invited him into their academy at the age of 14.

Kouassi's development has accelerated since that moment, as he smoothly made his way through both the U17 and U19 sides before finally earning his maiden senior call-up in late 2019.

"It's true that I have had a good two months," explained Kouassi in a recent interview with France Bleu Paris. "It gives me great pleasure to play with the club that trained me. I really worked hard to get there. I hope that it will continue like this. 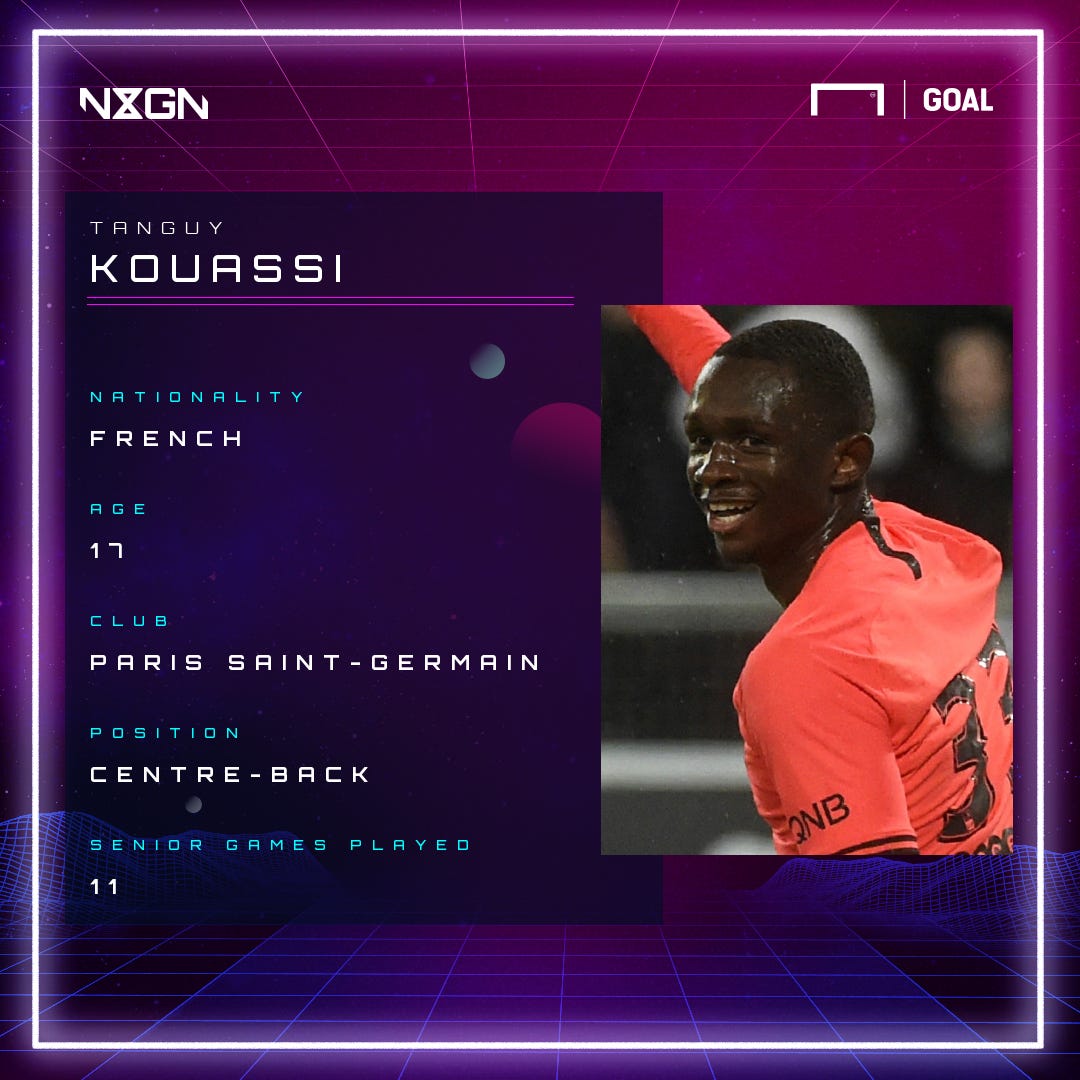 "Saying that I am walking on water? I don't think so. I haven't done anything yet, compared to Thiago Silva, Marquinhos or Presnel Kimpembe."

While not revered like his more senior colleagues quite yet, PSG are hopeful that he can be convinced to step into the shoes of the club's elder statesmen in the next 12 months, with it seeming increasingly likely that Thiago Silva will not have his contract renewed before it runs down in June.

The only issue is that Kouassi finds himself in a similar position to that of the man 18 years his senior.

He too will be free to leave the club at the end of the campaign, with no agreement having been reached for him to sign a first professional deal. It is not for the want of trying, with sporting director Leonardo insisting that "positive" talks have been held, but as things stand both Kouassi and fellow teenage prodigy Adil Aouchiche are heading towards free agency.

Both Manchester City and RB Leipzig have shown an interest in Kouassi, and there are sure to be more potential suitors should a solution not be found between now and June 30.

For now, the youngest player to score a brace in Ligue 1 for 44 years is focusing on further establishing himself in Tuchel's plans. If he is able to do so, then getting him to sign on the dotted line may become far easier for Leonardo and Co.