The 21-year-old started only five league games last term, but she matched that tally for this season as she scored the winner versus Arsenal on Sunday

When Manchester United faced reigning Women’s Super League champions Chelsea on the opening weekend of the new season, there was a surprise in Casey Stoney’s line-up.

European champion and World Cup finalist Jackie Groenen was on the bench. In her place was Ella Toone, the 21-year-old who started just five WSL games for United during the 2019-20 season.

Since that day, when the Red Devils collected a massive point in a 1-1 draw, Toone has continued to do nothing but impress and improve – with her match-winning strike against Arsenal on Sunday further indication of how far she has come.

“She's given me no choice but to put her in week in, week out,” head coach Stoney told reporters after the victory.

“Her performances are keeping her in. It's testament to her. She's very coachable, she's open-minded, she's hard working, she stays out on the pitch, she does so much extra - and it's paying off for her.”

As things transpired, that starting line-up against Chelsea was something of a stroke of genius by Stoney.

Groenen was benched in order to serve as an impact sub, which she did well by setting up Leah Galton to equalise and grab United an absolutely massive point.

Toone, meanwhile, was one of the most impressive players on the pitch, and has only built on that performance as the season has gone on.

A lovely move from Man Utd which @ellatoone99 finishes 😎pic.twitter.com/g98Ppew7G0

She has started five league games this season for United, as many as she did last term, and earned her first two senior England call-ups in the process.

That is despite a whole host of incredible talent arriving in Manchester over the summer to make competition for places even greater – something that made Lionesses head coach Phil Neville all the more impressed.

“At the start of the season, United are signing all these players you’re thinking will Ella get through?” he said last month, upon announcing his England squad for the October international break.

“But through determination, form, performance level, hunger and desire she’s someone who has been named in every United starting XI bar one.

All of this is credit to Toone's hard work.

When England first went into lockdown back in March, as the 2019-20 WSL season was suspended – and eventually abandoned – Stoney tasked the young midfielder with building up her strength and physical attributes in order to take her game to the next level. Toone responded to that challenge brilliantly.

“I worked a lot in lockdown on my physical side of my game,” Toone explained.

“I think that's a big thing as to why I wasn't playing as many games last season. I've come back a lot stronger, Casey's giving me the opportunities and I think I've taken them.

“She's put her trust in me and I've just got to perform on the field." 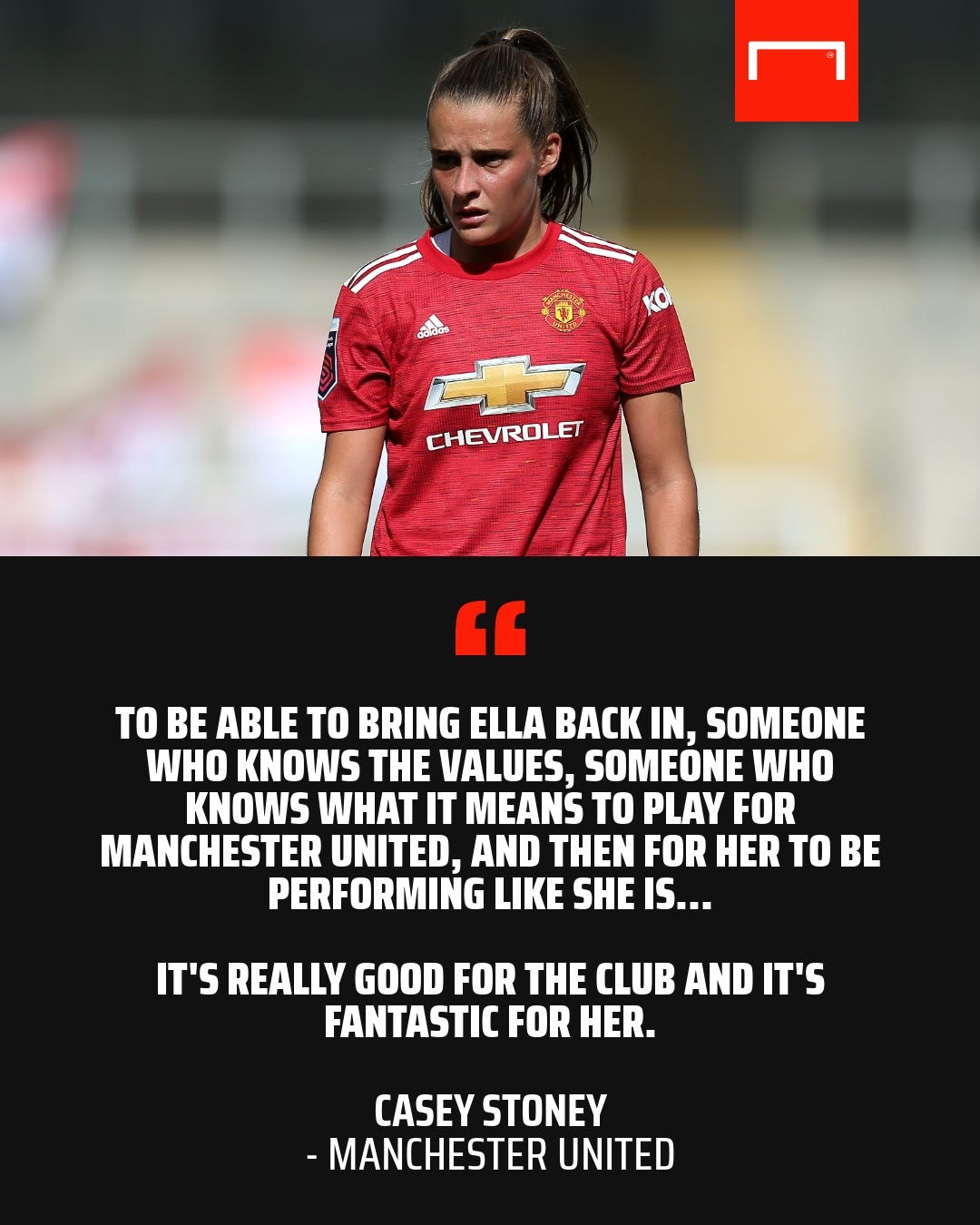 She has certainly done that. Sunday’s strike was Toone’s third of the season, but her most important yet.

With United pushing hard to break the stronghold that Manchester City, Chelsea and Arsenal have on the women’s game in England, this weekend’s result was absolutely massive – probably the biggest in their short history.

They remain unbeaten in the WSL this season and are now top of the standings as they target a top-three finish, which would potentially give them a Champions League berth.

In a way, Toone scoring that goal, and Jess Sigsworth assisting it, made things even sweeter for Stoney’s side.

The Red Devils have signed a number of big names since promotion to the WSL, from Groenen to the World Cup-winning duo of Christen Press and Tobin Heath, but Toone and Sigsworth are two players who were key in 2018-19, when they won the FA Women’s Championship title.

It was even more special for Toone to get that goal, having spent most of her teenage years in United’s academy set-up before the club had a senior women’s team.

“To be able to bring her back in,” Stoney added, “someone who knows the values, someone who knows what it means to play for Manchester United, and then for her to be performing like she is, it's really good for the club and it's fantastic for her. The only credit goes to her."