The first of many: Gordon shows Liverpool his rich potential as Klopp's kids sink Norwich 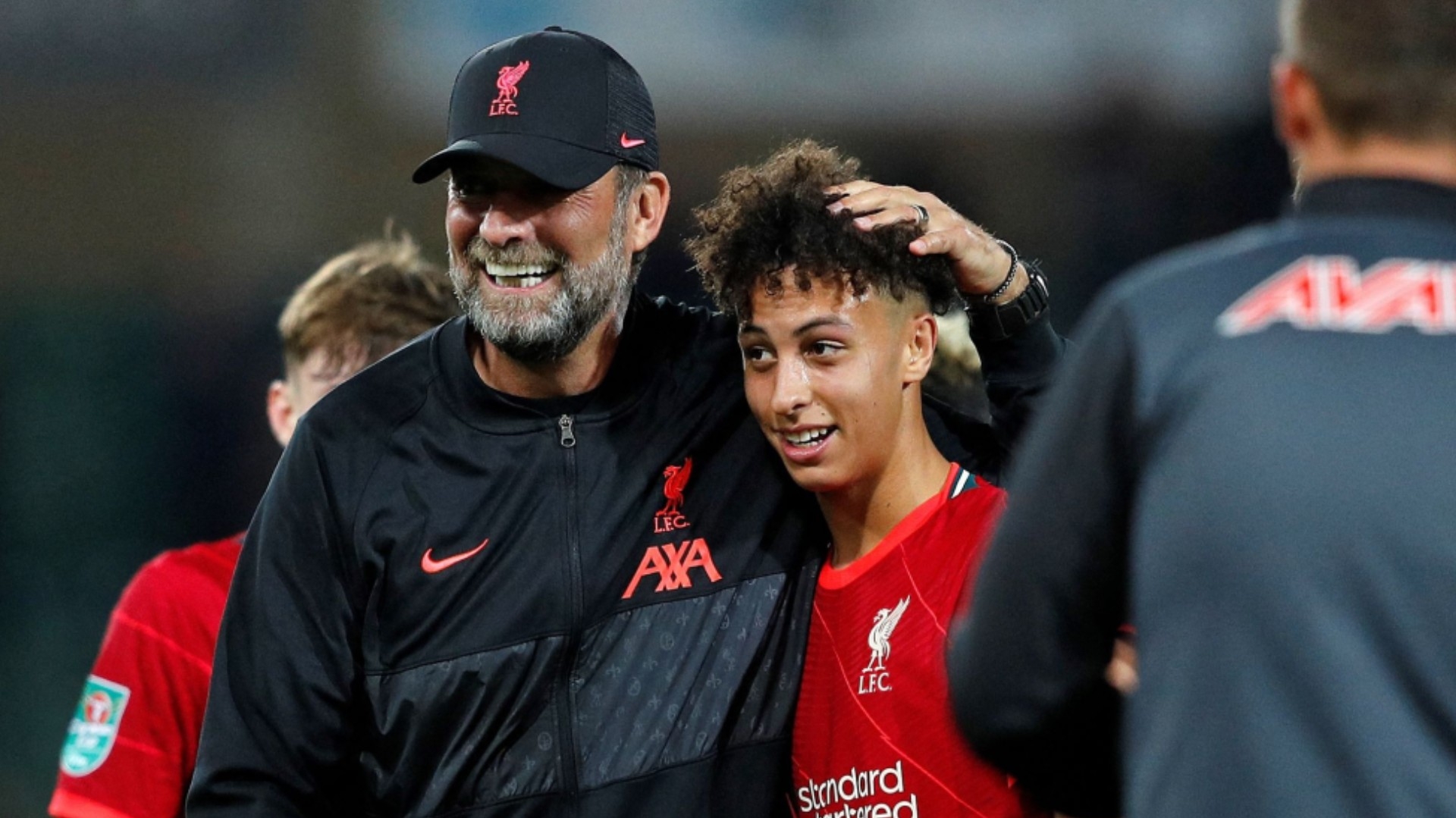 For Kaide Gordon, this was surely the first of many.

What a night this was for the Liverpool teenager. Two weeks shy of his 17th birthday, the winger became the fifth-youngest player in Reds history, starting as Jurgen Klopp’s side beat Norwich 3-0 in the third round of the Carabao Cup at Carrow Road.

It has not taken long for Gordon to show his rich potential at Anfield. Signed from Derby County in January, in a deal which could eventually cost Liverpool upwards of £3 million ($4.1m), the tricky, fearless winger has taken on every challenge since with gusto.

He could have been playing for the Under-18s against his former club at Kirkby on Tuesday night, but instead he was taking on experienced, seasoned professionals and looking entirely at home doing so.

“A big talent, no doubt about that!” Klopp had said before kick-off. “He is a really good player, you will see that immediately.”

He was right. Playing on the right of Liverpool’s attack - the space usually reserved for Mo Salah - Gordon’s quality was apparent from the word go.

His touch is immaculate, his balance too, and for one so young, there is a pleasing appetite for the dirty side of the game too.

He had the travelling Liverpool fans applauding early on, closing down Norwich centre-back Ben Gibson hungrily near the corner flag. To play in a Klopp side you need to do those things, and Gordon does. He is no respecter of reputations.

Gordon made up a very youthful right side, with Conor Bradley also making his Reds debut at full-back. The 18-year-old has already been capped at senior level by Northern Ireland, and is another for whom hopes are high.

Bradley will be all the better for this experience, a mixed one which saw him concede a penalty for a foul on Dimitris Giannoulis near the end of the first half. Naive, you would call it, but all part of the learning curve.

Caoimhin Kelleher, the Liverpool goalkeeper and another academy product, ensured it was not costly in any case, saving Christos Tzolis’ spot-kick before captain-for-the-night Joe Gomez blocked Adam Idah’s follow-up effort.

Bradley recovered superbly from that setback. Tenacious and tidy, he was still going strong in the closing minutes, bombing up that right flank without a care in the world. Good on him. Nothing brings a smile in football like the innocence of youth.

Takumi Minamino had given the visitors the dream start, four minutes in. The Japan international was sharp as a tack in spinning to fire home after Divock Origi had headed down a corner from Kostas Tsimikas. It was Minamino’s first Liverpool goal since December, and he would add to it later in the day. All six of his strikes for the club have come away from Anfield.

Gordon might have added to Liverpool’s lead, cutting in with confidence from the right to skim a left-foot shot a yard or so wide of the near post. Salah-esque, you might say.

So too was the way he collected the ball on the half-turn and set Origi away early in the second half. There were moments when he drifted to the periphery, understandably, but when he did he was quickly brought back into the game.

Klopp was pictured speaking animatedly to him in the first half, while Oxlade-Chamberlain was constantly in his ear, even though the more experienced man had a night to forget himself.

There was another debut at half-time, with Wirral-born midfielder Tyler Morton introduced for Naby Keita. The 18-year-old, like Bradley, was a key member of the side which reached the final of the FA Youth Cup last season, and slotted in nicely. Combative and composed, he made an excellent first impression at senior level.

It was not just the newcomers catching the eye, of course. Minamino’s performance was encouraging, to say the least. Slick and busy, he looked more like the player Liverpool signed from Salzburg than the one they shipped out on loan to Southampton.

He deserved his second goal of the night, 10 minutes from time, squeezing the ball home at the near post after Bradley had won the ball back tenaciously on the edge of the Norwich box.

Origi, too, had a good night. Involved in the first goal, he scored the second with a towering header from another fine Tsimikas delivery from the left. It was his first goal in nearly a year, and his 10th in 14 League Cup appearances. He is not done yet at Anfield, it seems.

Tsimikas was another to further his reputation, a more than adequate understudy for Andy Robertson on this evidence, while Curtis Jones’ maturity and footwork in midfield stood out. He’s still only 20 himself, remember. This was his 50th senior appearance in a red shirt. There should be many more.

What a great night this was for the staff at Kirkby, with another 18-year-old, James Balagizi, also involved in the squad. The hard work put in by the likes of Barry Lewtas, Marc Bridge-Wilkinson, Alex Inglethorpe and the coaches at all academy age-groups are vindicated on nights like this.

“We don’t celebrate debuts,” Inglethorpe once told Goal, but they can still enjoy them. In Kelleher, Bradley, Morton and Jones, there was plenty to make them proud here.

In Gordon, meanwhile, Liverpool have another diamond to polish. There is a long way to go, of course, but they will have some fun with this kid, for sure.