As he prepares to move to Merseyside, the defender's former coach and team-mates at Sochaux tell Goal how his top-level potential was always clear

All of a sudden, Bryan Lasme has a decision to make.

“I’m a big supporter of Chelsea,” the Sochaux forward tells Goal, smiling. “But now when they play Liverpool, I don’t know what I’m going to do!

His dilemma is understandable. Lasme’s best friend, after all, is Ibrahima Konate, who on July 1 will complete a £36 million ($51m) move to Anfield from RB Leipzig.

“That’s my brother, man!” says Lasme. “I’m so proud of him, and so excited for him. I hope for only the best for him with Liverpool and in England.”

Lasme and Konate have known each other since 2014, when they became team-mates at Sochaux’s academy. It was there, near the Swiss border, that they forged a friendship which has lasted, even as their respective careers have gone in different directions.

“We would do everything together,” Lasme says. “We roomed together, we would watch football, play PlayStation, ping pong, cards, everything.

“Ibou came from Paris and I came from Montauban, which is a long way from Sochaux, and so I suppose it was natural that we connected. Sometimes it is not easy when your family is so far away, but he was there for me and I was there for him, you know? We became big friends in that time.”

Konate had arrived in Sochaux as a midfielder, but would switch to centre-back at Under-17 level thanks to the foresight of coach Eric Hely.

“It wasn’t an obvious move, to be honest,” Lasme says. “Because as a midfielder, he was good! He was technical, he was fast, he was strong and he could play.

“He had the qualities you would want in a midfield player.” 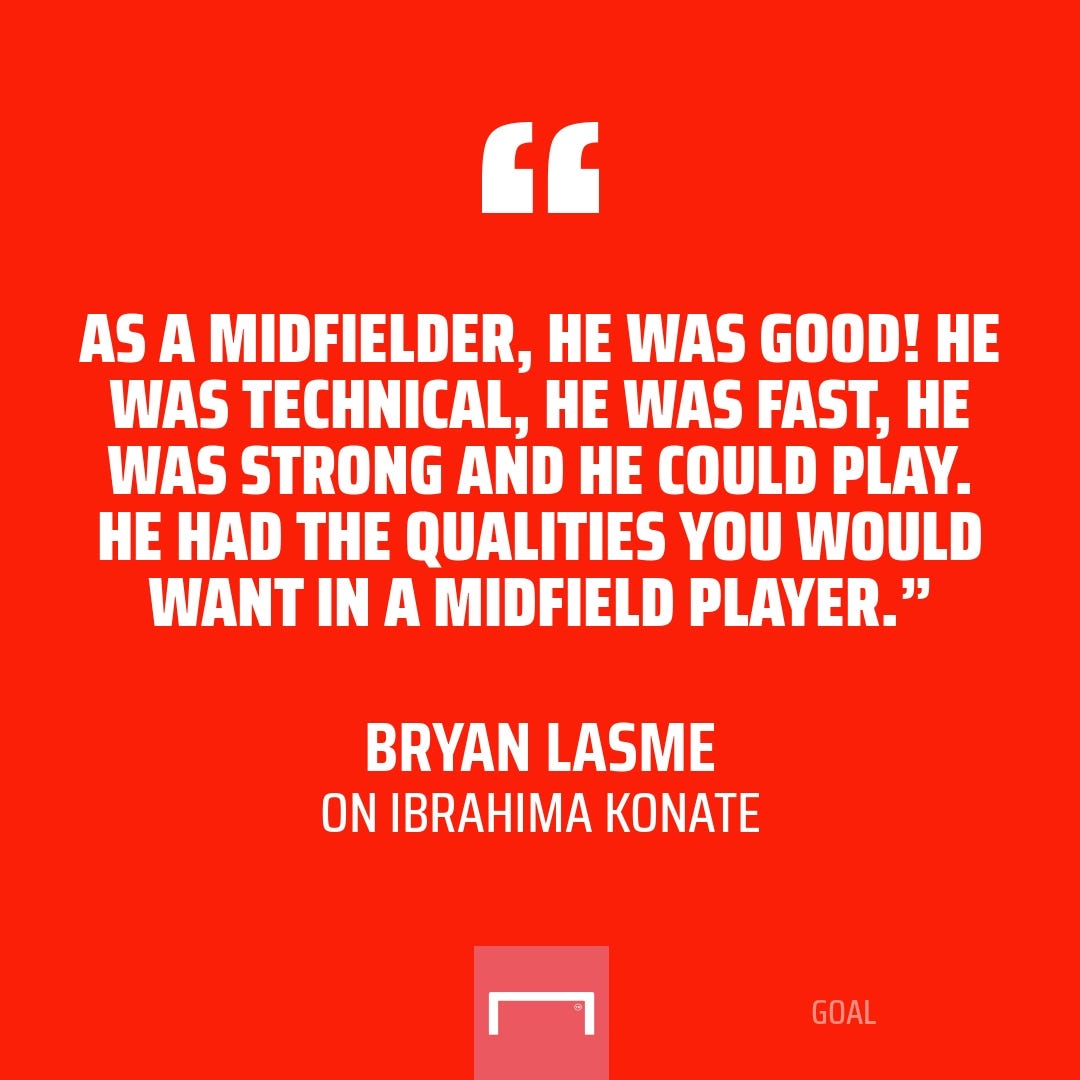 Sochaux’s coaches, though, had spotted the teenager’s potential as an athletic, ball-playing defender, and Konate’s rise began to accelerate after his positional switch.

At 17, and after just a handful of appearances for Sochaux’s B team, he was called up to train with the senior squad. Albert Cartier was coach at the time and now, more than four years later, he remembers Konate’s arrival well.

“He was so mature,” Cartier tells Goal. “With or without the ball, he knew what to do. He always listened, he was calm and he was always humble.

"You could see straight away that he had big potential.”

Mickael Alphonse was Sochaux’s right-back at that point and, like Cartier, recalls the youngster making a solid early impression.

“He came to train with us during the international break,” Alphonse says. “He stood out for being very tall and very fast, even though he was so young.

“Maybe at first we didn’t see his full capability because he was so respectful, so shy. He was still young tactically, and he needed to learn and grow.”

That growth happened fast. Cartier remembers sending Konate back to Sochaux’s B team with a clear instruction.

“I told him ‘You need to perform and behave at an exemplary level, with your team-mates, with your coaches, with the opponents, with the referee,'” he says. "I said 'If not, you will stay with the youth team.'

“A week later, he was back with the senior team, and he never left!”

Indeed, soon after, Cartier was ready to give the humble, wide-eyed youngster his professional debut against Monaco in the quarter-finals of the French Cup.

“I’ll remember this game all my life,” says Lasme, who was an unused substitute for Sochaux that night. “It was the game which launched Ibou’s career.” 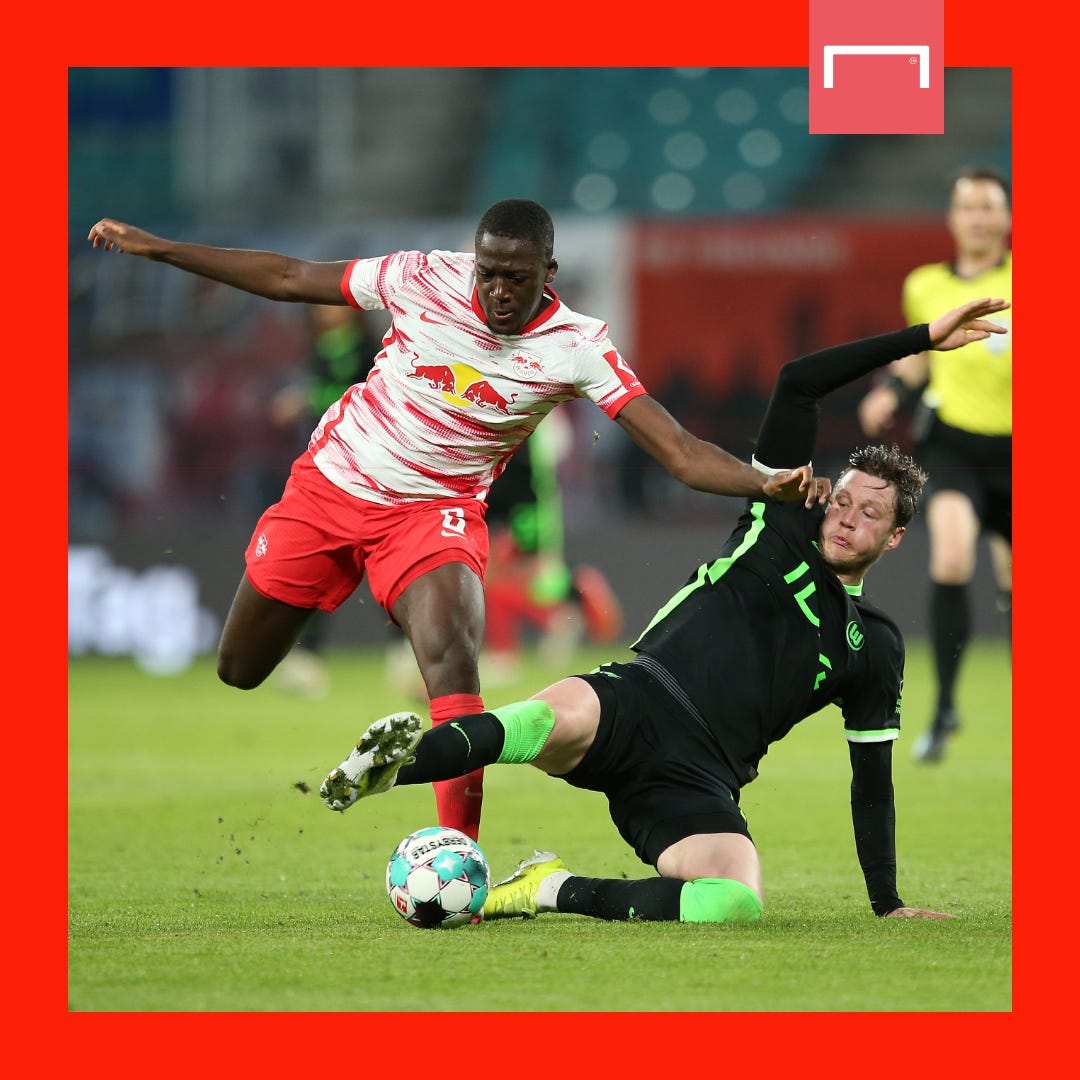 Monaco were some team. They would reach the semi-finals of the Champions League that season, with the likes of Radamel Falcao, Bernardo Silva, Fabinho, Thomas Lemar, Tiemoue Bakayoko, Benjamin Mendy and a 17-year-old by the name of Kylian Mbappe all starring.

“They had the best attack in Ligue 1,” says Cartier. “We had injuries and suspensions, and so before the game I called Ibou. I said ‘If I told you you were to be starting against Monaco, how would you react?’

“He said ‘I would go back to my room, watch every video of my opponents, study and learn, then turn off my phone and focus on the job.’

“That was good enough for me!”

Konate started the game, as did Lemar, Bakayoko and Joao Moutinho. Falcao and Bernardo both came off the bench, while Mbappe and Fabinho were unused subs. Sochaux eventually lost on penalties after a 1-1 draw, but their debutant centre-back was the talk of the town.

“He played a huge game,” says Lasme. “Everything changed for him after that.”

Alphonse, who played alongside Konate at the back, describes his performance now as “a monster".

“I think that is when Ibou sent a welcome to the professional world!” he says. “It was an XXL performance. With this game, he showed that he would be an incredible defender very quickly!”

That was in January 2017, but by June of that year Konate was on the move, joining Leipzig after a charm offensive from Ralf Ragnick, then Red Bull’s director of football.

Rangnick, who beat the likes of Lyon to the youngster's signature, would later declare that Konate was "a potential world-beater", capable of playing for any club in the world. 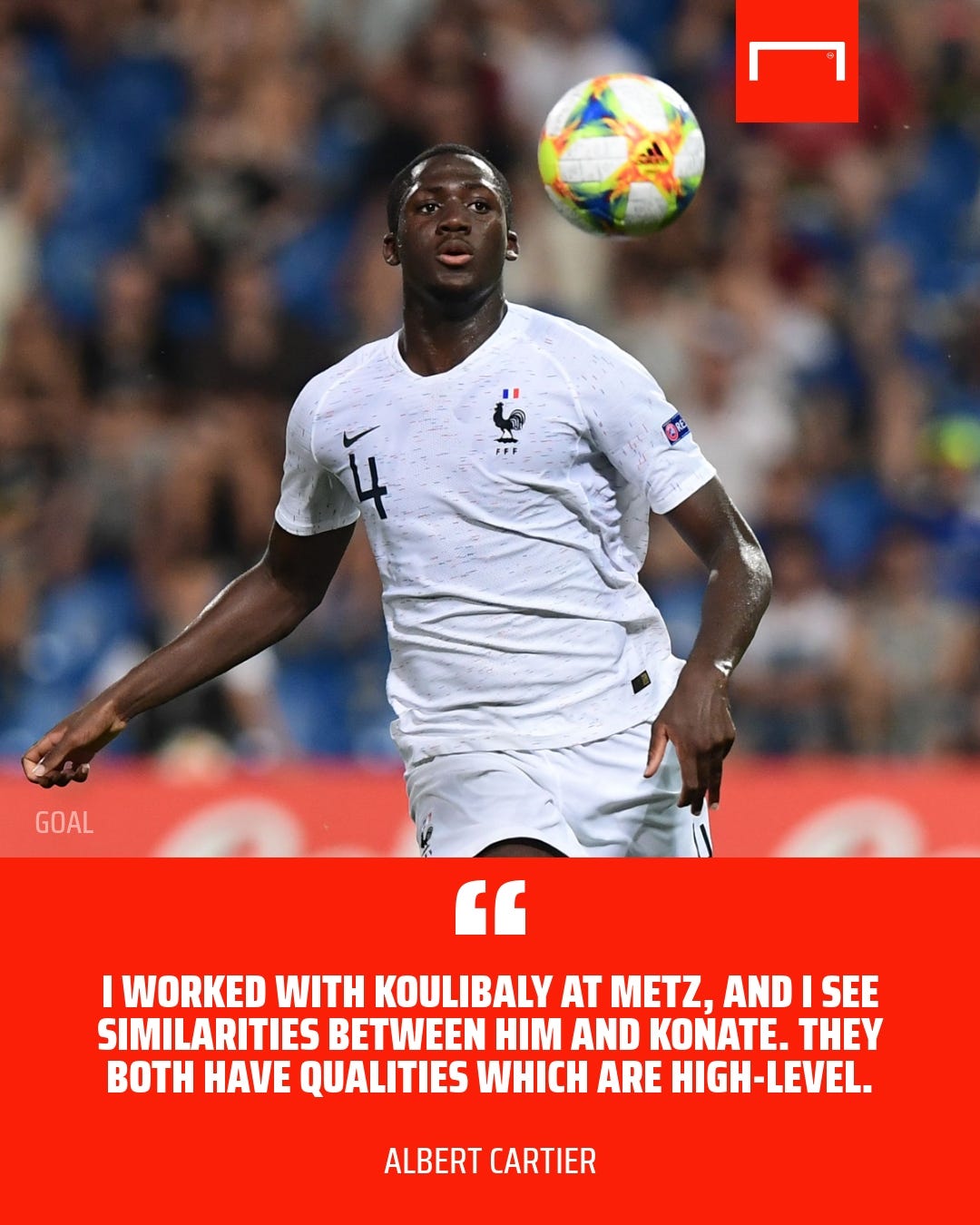 “Nobody was surprised when he left,” says Alphonse. “His performances from that Monaco game were of such a high level. After three games I told him ‘You are going to finish very high in this game.' It was obvious.

“On top of his talent, he was a seeker, you know? He always wanted to talk, to learn. The crazy thing was, he probably wasn’t aware at that time of his extraordinary physical qualities. He was so shy, but he was a mountain! I used to joke with him that he had to lower his head just to fit into the changing room!”

“He knew where he wanted to go in life,” he says. “And his best quality is that he never makes the same mistake twice. If you tell him something, he remembers it.

"I worked with [Kalidou] Koulibaly at Metz, and I see similarities between him and Konate. They both have qualities which are high-level."

Lasme, who remains at Sochaux to this day, remembers Konate’s competitiveness as much as anything.

“He hates to lose!” he smiles. “That’s why he sometimes tries to cheat at cards. He’ll say he doesn’t, but I know the truth!

“He knew what his path was. He knew why he was at Sochaux. I remember he would always say that he wanted to play in the top leagues.

"I can remember watching a Champions League game with him in our room at Sochaux, and before we went asleep he told me ‘Bryan, I will play in that competition one day.' I believed him.” 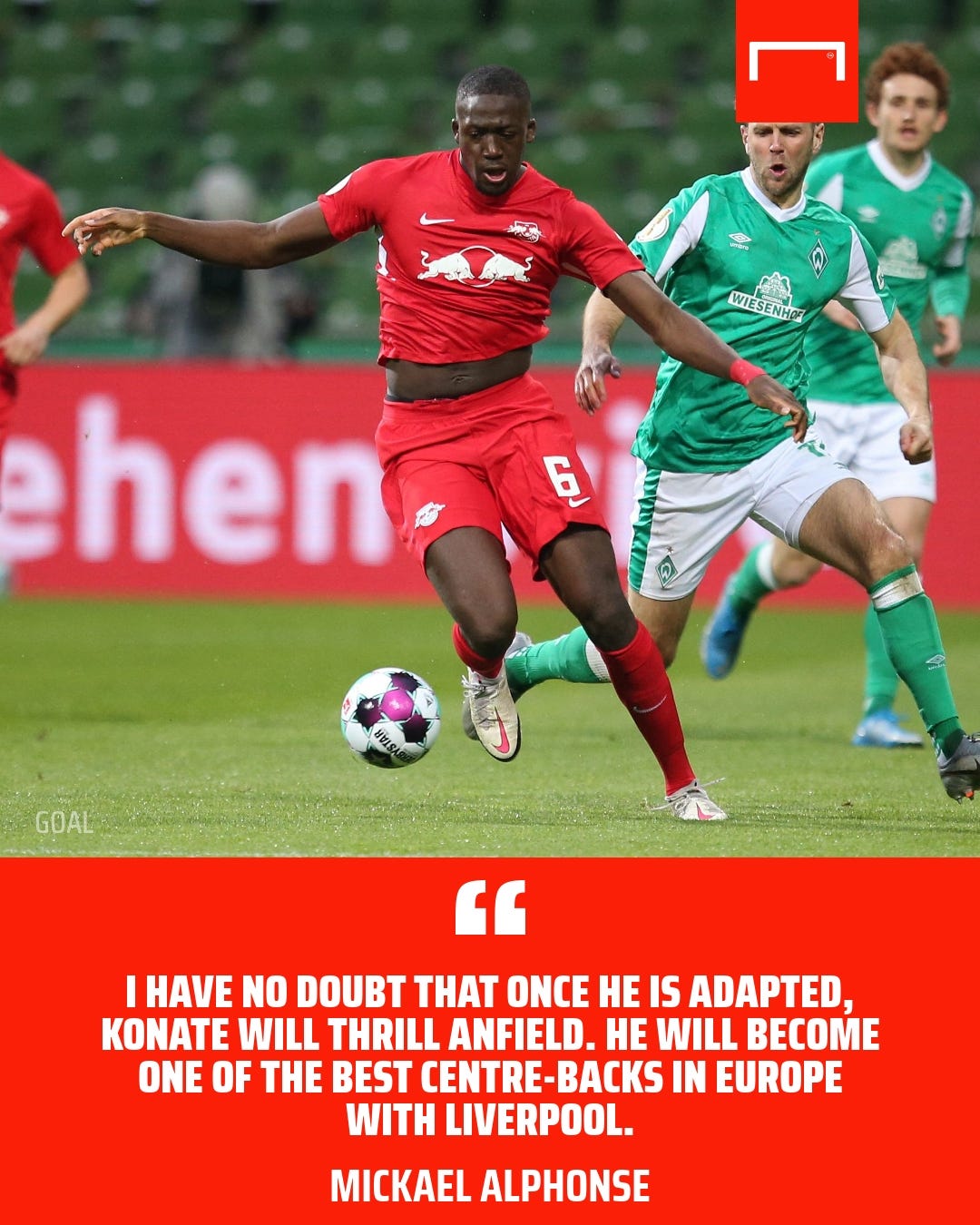 Konate’s ascent continued at Leipzig, where despite a number of injuries he would further his reputation as one of Europe’s outstanding young defenders, making close to 100 appearances for the Bundesliga outfit.

Now comes the next challenge, a move to the Premier League, and a chance to make himself a household name with Liverpool under Jurgen Klopp.

“I can’t wait to see him evolve in England,” says Alphonse, who now plays with Amiens in Ligue 2. “It’s a very physical league, but I have no doubt that once he is adapted, he will thrill Anfield.

“For me, he will become one of the best centre-backs in Europe with Liverpool.”

“The culture of success at Liverpool will mean he progresses fast,” he says. “He will become more aggressive in England, but he has key attributes that will enable him to succeed; his competitiveness, his humility, the way he thinks of the team first and his exemplary professionalism.”

And as for Lasme, well, he’ll just be proud to see his "brother" doing his thing on the biggest stage.

“He’s going to shine in England,” he says. “To see him move to a club like Liverpool, it’s emotional. He’s excited. He likes the culture, he likes to speak English, and I think Liverpool will be perfect for him. He deserves to be at a club like this.

“Five, six years ago he is watching them on the TV, and now he will play next to Van Dijk, Gomez, Matip, these guys. It’s amazing, a big dream for him.

“We will all be watching and supporting him this season – even against Chelsea!”