A different path: Gomez now being tracked by Man City & Dortmund thanks to bold move to Louisville 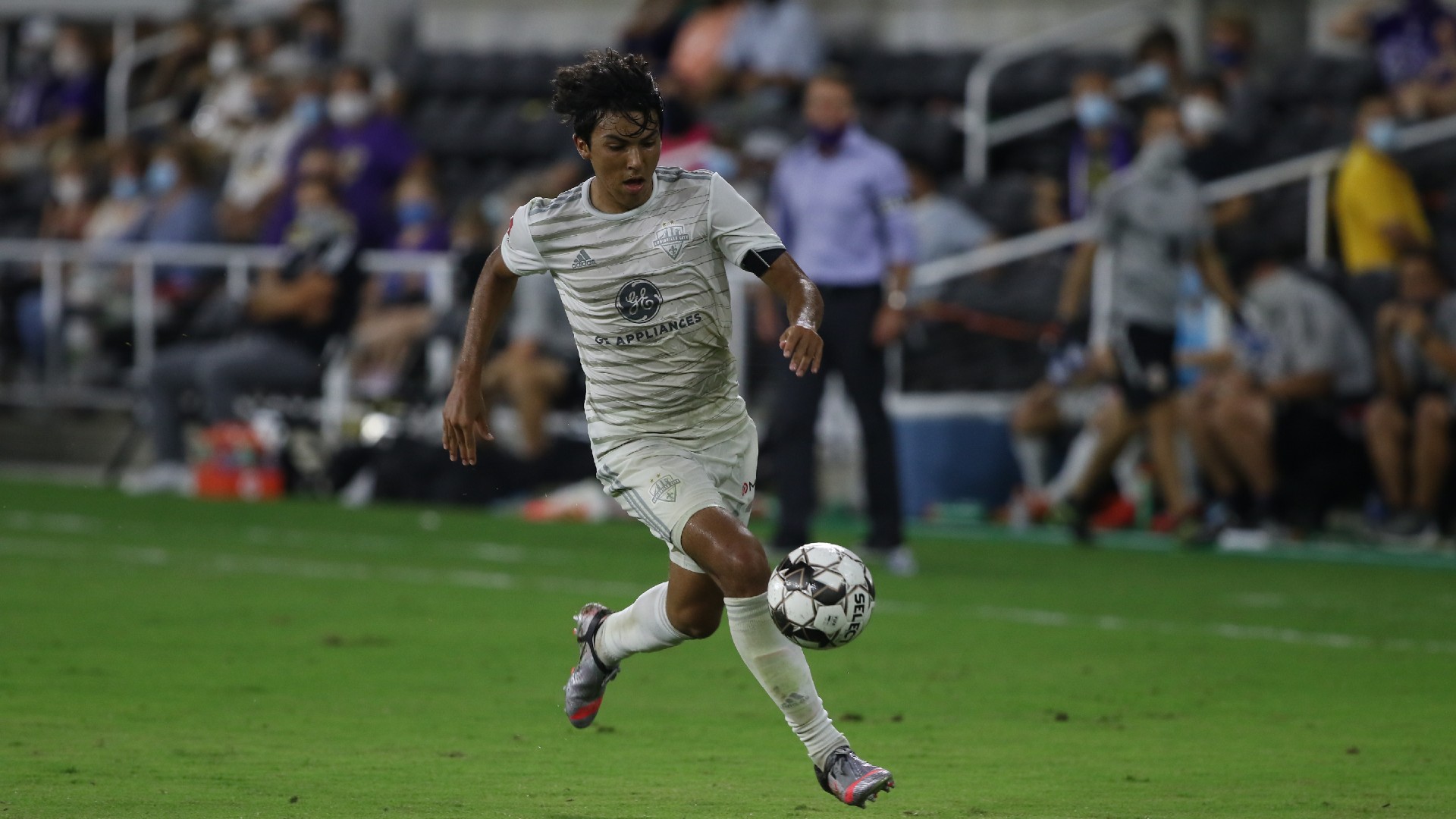 Every career has a story, and every story is defined by a handful of decisions. It's those decisions that create your path; that often determine the difference between success and failure.

At just 16 years old, fullback Jonathan Gomez made the first big decision of his career. He decided to leave home, and leave the FC Dallas academy, a talent factory virtually unmatched in American soccer. Instead of continuing on with Dallas, he chose a move to Louisville City, a club in the second division of American soccer.

The move saw Gomez move onto a path different from the one taken by many of American soccer's top up-and-comers, but it's one that he believes will line him up perfectly for his next big decision: which top club to join when Europe inevitably calls.

At just 17, Gomez already has a full season of professional soccer on his resume, even if that season was influenced heavily by the coronavirus pandemic. He's already represented both the U.S. and Mexico at youth level, and he already has a host of European clubs monitoring his progress ahead of his 18th birthday, when he would be allowed to sign abroad.

Due to the coronavirus, he's been unable to train with Real Sociedad, Holstein Kiel, Chivas de Guadalajara and Lille, but they've all remained in touch. Manchester City have made contact, Borussia Dortmund have watched him play and PSV scouted him during his time with the U.S. U-17s.

The point is, the interest is there. However, in order to turn that interest into something tangible, Gomez must first prove himself with Louisville, whom he joined a year ago.

"It was definitely a hard decision to leave Dallas," Gomez tells Goal. "I guess really what went through my head was that I needed to really determine if I wanted to play in Europe one day and whether that was sooner rather than later.

"If I had stayed in Dallas, it might have been a few more years before I was able to make the jump. Obviously, with me growing up there, I was going to have to leave what really was a place I called home, and kind of start over."

As Gomez said, he had roots in Texas, having joined the FC Dallas setup at age 12 originally as a left-winger before making the move to left-back.

Growing up, he saw himself a lot in Marcelo but, as the years have gone on, Gomez admits he looks to Dortmund's Raphael Guerreiro and RB Leipzig's Angelino as role models.

At age 15, he signed an amateur contract with FC Dallas's reserve team, North Texas SC in the USL League One, American soccer's third division, where he made nine appearances.

He describes the FC Dallas academy system as "one united family", and that family has helped send fellow fullbacks Reggie Cannon and Bryan Reynolds to top European leagues in recent months.

Both Cannon and Reynolds took similar paths. They both came up through the academy, earned their first-team spot and then flourished, before making their move abroad.

Cannon did it first, earning a move to Boavista, while Reynolds' time as Cannon's replacement didn't last long before Roma snatched him up following a prolonged transfer saga.

But that wasn't Gomez's path. Instead, he opted for a move to a lower league, one which would move him right into the first team at a young age and, when the time came, sell him for a profit.

He's not the first to make this move, as the New York Cosmos' signing of Haji Wright before his move to Schalke was one of the watershed moments with this scenario. But he is the latest to decide to test the waters outside of MLS with the hopes of making a move abroad around his 18th birthday.

And so Gomez moved to Louisville in March 2020, giving him a chance to work with head coach John Hackworth, a former U.S. youth national team head coach that worked with players like Christian Pulisic, Tim Weah and Josh Sargent.

"He's as good as those guys, no question in my mind," Hackworth says. "If you think about some of those players, though, there's still development that has to take place, and so I think it's a really crucial time for Jonathan because I feel like he has the potential to be as good as or better than the players you're referencing.

"At the same time, a lot has to happen in the next couple of years, and mainly with himself, to try to get through the ups and downs of trying to be a first-team player. That's the challenge now for him.

"He's chosen a different path to do it than some other guys his age, and I give him a lot of credit for that, but it's not an easy path to get to where he wants to go."

Ultimately, where Gomez wants to go is Europe and, at Louisville, he believes he has the ideal partner in helping him get there. Gomez made 10 appearances for the club last season, and is hoping to take on a bigger role with the first team as the 2021 season nears.

In Gomez, Louisville have a talented young fullback on their hands. Hackworth describes Gomez as someone who "has all the tools", but those tools reach a different level when Gomez is in his zone. When the teenager has a smile on his face, Hackworth says, his creativity reaches another level, and those moments are fun to watch.

Louisville itself is a unique club, one that isn't too much of a step down from MLS. The USL Championship is littered with former MLS veterans on independent clubs as well as up-and-coming youngsters scattered through MLS reserve teams. In recent friendlies, Louisville recently defeated FC Cincinnati before falling to Austin FC and the Houston Dynamo.

Playing with Louisville is a massive step for Gomez, who is now competing with grown men that have been doing this for years upon years. He's no longer in an academy environment, but rather a legitimate senior setup that isn't far removed from America's top division.

Hackworth, having worked with young talent, understands the wants and needs of someone like Gomez, who is seen as the club's prized prospect and is given the attention he needs to thrive. With Louisville, Gomez will receive all of the mentorships he needs from guys like Hackworth, assistant Danny Cruz and seasoned pro teammates like Brian Ownby, Pat McMahon and Oscar Jimenez.

And, when the time is right, Louisville knows that they'll have to sell and send Gomez on his way towards whatever his next step may be.

"He has choices if he reaches the level that we all think he's going to reach, "Hackworth says, "and those choices are: does he stay in the United States or does he go abroad? There is interest from MLS at a much higher level than maybe there was for him to sign a homegrown contract.

"I don't want to speak negatively about the MLS pathway, but this one is different. It is for sure for families and players. If they're looking for certain opportunities, this one gives them a lot of choices."

"I would like to see Jonathan play this year in the USL Championship, and then transfer to another level," Hackworth adds. "I think he is good enough to do that, and he needs to be challenged that way.

"My hope is that he does well for us and he gets noticed by one of many clubs. It could be that MLS clubs come back and start looking at him again.

"But I'm going to just be dead honest: I think it's more likely, especially with the market being the way it is, that there's a better chance that he'll end up in Europe somewhere."

And so Gomez will face more big decisions in the coming years. At some point, he'll have to decide what's next, where his next move will be if everything goes to plan. And perhaps at some point he'll have to decide between the U.S. and Mexico, a decision that he admits he's nowhere near making any time soon as he keeps his international options open.

Does he head to Portugal to follow his brother Johan, who has already served as a mentor since making his own big move? Can he become the latest young American to make the move to Germany? Will clubs like Man City, Real Sociedad or Dortmund come calling and, if they do, what happens then?

Those decisions will define his career, just like his choice to come to Louisville did. But Gomez is excited by his own path and where it leads, even if his story is one that has begun in a much different way than many would have imagined.

"I think it's definitely exciting," he says. "I just put it in the back of my mind. I'm always aware of it but not necessarily thinking about it. I definitely don't think about it when I'm playing. and it's not like I don't feel pressure from that or anything.

"Even if I know that they're watching me, I just play normally but it's definitely exciting to know."