When one pictures a typically fiery home crowd in South America, a few images immediately come to mind.

There's the heat and colour of the flares and pyrotechnics, as well as the bellowed chants which, in turn, declare in turn an undying love for their team and a desire for the worst possible fate to befall their rivals.

Finally, in the background, pounding on and on, there are the drums, never falling silent so long as even one fan remains in the stadium to cheer their side on.

At River Plate, though, that incessant beat had fallen silent, until Saturday, when, as part of an experiment which could have revolutionary implications for the future of Argentine football, the drums came back, albeit in a new guise rarely seen in the country.

It is no easy feat to trace the origin of the bombo (similar to a large bass drum, with a cymbal attached on top), or its introduction in the stands.

The instrument first seems to have appeared in the Rio de la Plata region of Argentina and Uruguay around the turn of the 20th century as a part of the Murga street performances, which were (and still are) practised around Carneval, growing in part from the Candombe ceremonies which took hold amongst populations of African descent in the port capitals of Buenos Aires and Montevideo.

Those popular origins have remained with the bombo ever since. It is by nature the most democratic of instruments, with no particular training or talent needed to play, other than the ability to keep a rudimentary beat, and that surely has contributed to its universal popularity. 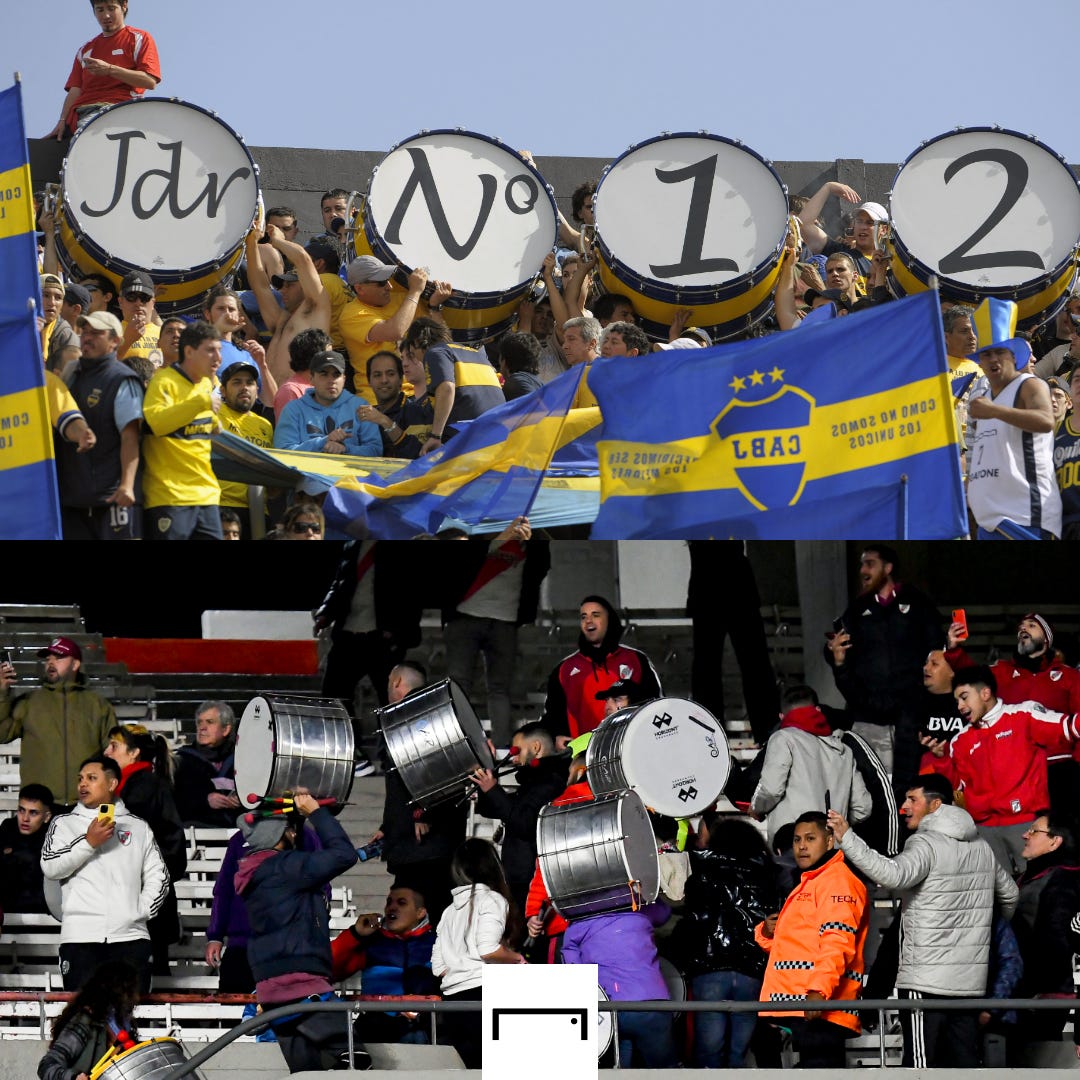 Over the years, the instrument transcended Carneval celebration and began to be utilised in political demonstrations of socialist movements and trade unions, and also made the jump over to football, that other great demonstration of working-class exuberance and defiance.

For example, Argentina's 'superfan' Carlos Tula, who has attended every World Cup from West Germany 1974 to Russia 2018, plays a drum given to him by former president Juan Domingo Peron.

“The bombo is important because it is an instrument of the struggle,” Tula explained to Conclusion.

“It used to be the sign of the National Justicialist (Peronist) Movement, when the drum used to sound you would hear, 'here come the scum, here come the Peronists.'

"But that started changing... Now, it belongs to everyone who is out there fighting.

"It is the fighting instrument of the Argentine people out in the street, whatever they are: Peronist, radical, communist.”

One extremely literal, infamous example of the use of this 'fighting instrument' came in 1999.

After years of mismanagement in the boardroom, Primera Division side Racing Club were declared insolvent and in liquidation, and, amid intense fan anger, then-president Daniel Lalin attempted to stage a makeshift conference.

However, as soon as Lalin started to speak, a bombo flew through the crowd and struck him square in the face, shattering his glasses and leaving a nasty wound.

“That assault made sense,” Lalin, who resigned shortly after, told MDZ Radio on the 20th anniversary of the incident.

“If you are a Racing fan and you hear [the team has been liquidated], you're going to lose your mind.”

In terraces across Argentina, however, the bombo was co-opted by the barra brava, organised ultras which evolved from loose groupings of fanatics to highly structured, hierarchical organisations.

The barras have been accused of crimes ranging from intimidation and extortion to assault and murder and often have tight links with club administrations, which rely on them to provide support from the stands and in elections in return for financial reward and control of commercial concessions, such as match-day parking, merchandising and ticket resale.

It is a lucrative business, to the degree that much of the violence in recent years has been centred not between rival ultras but within bloody internal battles, which have been resolved in some cases with mafia-style hits and shootings.

Indeed, at least five of the 19 football-related deaths recorded by anti-violence NGO Salvemos al Futbol in Argentina over the last five years were motivated by clashes between factions of the same club.

Removing such a presence from stadiums is no easy task, but it is one River embarked upon in 2018 when the decision was made in the wake of the violence witnessed in the Copa Libertadores final against Boca Juniors to eradicate their Borrachos del Tablon ('The drunks of the stands') barra once and for all.

No fewer than 284 individuals were banned from the Monumental and every Argentine ground at the start of 2019, while, in April, a further 319 were added to the list on River's prompting.

“These people bring nothing to River or their members; we will work to make sure they have no place here,” president Jorge Brito vowed.

“We want them far, far away... and if others appear they will be expelled from the Monumental and the club.”

In one fell swoop, the Borrachos were banished, taking with them their intimidating control of the terraces, their banners – and their drums.

Few River fans wish to go back to the way things were. And yet, while the removal of such a criminal element has been greeted with joy at the club, and attendances are higher than ever – in May, the Millonarios sold out their home ground, all 72,000 tickets, for an 11th consecutive match – the absence of the drums cannot help but be noticed when Marcelo Gallardo's men are going through their paces.

However, for Saturday's clash with Lanus, an otherwise fairly routine 2-1 league win, the beat returned to the Monumental stands.

This time, though, in the hands of regular fans, members of regional supporters clubs from across the country, who signed up for the scheme to get their hands on a drum prior to the match, after going through careful vetting and criminal record checks.

Once the game was over, the instruments would have to be diligently handed over to River authorities and stowed away for the next clash.

"It is a practice that seems revolutionary in Argentina and seems impossible," Guillermo Madero, a director of Argentina's Security Ministry, which has strongly backed the project, told CNN.

"But has been done all across the world, even in South America."

Some 400 supporters provided the music for the win alongside 40 additional trained musicians and the experiment proved a rousing success.

Perhaps nobody was happier than coach Gallardo, who had pushed for the percussion in recent press comments.

"I have already said that our genuine support, from the fan who comes here and celebrates our folklore in the proper manner – that's what I love,” Gallardo beamed.

“We needed this chance to feel them accompanying us, I am glad that our people can come happy to the stadium, wanting to have a good time. That is the connection we have with the fans.”

Brito joined the coach in praising those involved, stating on Twitter: “I want to congratulate the River fans, who genuinely and with great effort organised the support from the stands.

“Yesterday was an historic day towards an Argentine football without violence.” 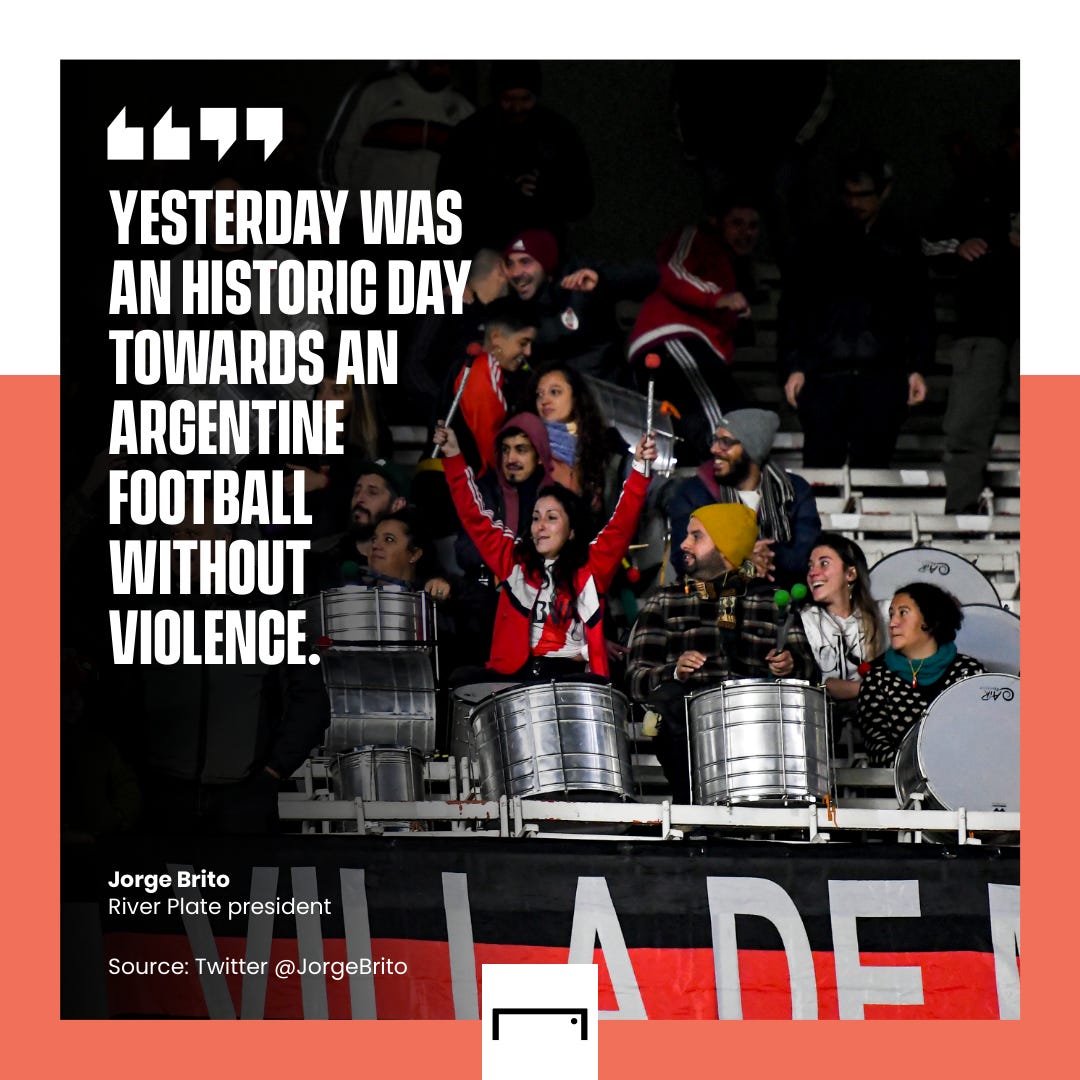 The real significance of Saturday's events will only be made clear with time. But it represents a true breakthrough against one of Argentine football's most pressing issues.

Many supporters maintain a contradictory relationship with their teams' barras. They deplore the syphoning of club funds, and are horrified by the stories of gruesome violence, but admit that it is the hardcore element which 'brings the party' to the stands.

It is the chants and music which drives the rest of the ground on to make the national game a truly unique spectacle.

If River succeed, though, that mindset may gradually weaken, taking power away from the mafias and handing it back to the regular fans which pay their membership dues every month, attend every game, rain or shine, whether their team be first or 21st in the league.

It may prove nothing more than a flash in the pan – but perhaps this is a tiny step towards placing the bombo back in the hands of the people, and restoring it once more as its universal, democratic instrument of choice.