The 20-year-old attacker is aiming to become the first U.S. women's national team player to ply her trade in Mexico

When Mia Fishel fell to the Orlando Pride at the fifth pick in December’s NWSL Draft, it felt almost serendipitous.

Fishel, one of the top American attacking prospects, would be reuniting with her college coach Amanda Cromwell, who had only just left UCLA to take over the Pride.

The Pride also had a glaring hole in its forward line after Alex Morgan moved across the country to join up with the expansion San Diego Wave.

The Pride, unsurprisingly, snapped up Fishel, giving the talented 20-year-old the perfect spot to begin her pro career.

But there was a notable twist in this storybook ending: Fishel did not want to be in Orlando.

In hindsight, the problems were too numerous to overcome: Fishel was upset at the process which led to her selection by the Pride. She felt blindsided when the team picked her. She preferred other teams. And, most importantly, Fishel resented the entire draft process, which strips players of agency in their final destination.

Fishel's desire to wrest back control led her to a place many, including the striker herself, would have previously never considered as a landing spot for a top American prospect: Mexico.

“I wasn't expecting to be here a couple of months ago, but with the whole NWSL draft, I felt like I wanted to take control of my own destiny and where I want to play, and with the draft, you just can't do that,” Fishel tells GOAL on the latest episode of All of US: The U.S. Women’s Soccer Show.

In January, Fishel signed with Tigres, the top team in Liga MX Femenil. It was a blow for Orlando and the NWSL, and a major coup for an up-and-coming league that only launched in 2017, and only started to allow foreign signings last year.

“What I did was historic,” Fishel says, not entirely inaccurately. “You don't see U.S. players coming to Mexico.”

“This hasn't been done yet,” she adds. “And the rate at which the league has been growing was also very appealing. They've only been here for five years or so and the global media recognition, the passionate fans, playing in [large] stadiums, you just don't get that in the U.S.

"I think that I deserve to be in a place where I would be appreciated and seen.”

Though Fishel speaks highly of her new surroundings, it also seems clear that she would’ve happily started her pro career in the NWSL – if she had more control over the process.

“I knew a couple of minutes before I got drafted that I was going to Orlando Pride,” Fishel recalls. “That wasn't my top choice to go to Orlando, and I didn't hear anything from the general manager, the coaches about me going there. So it was a little bit of a shock.

“It kind of sucked being in that position, knowing that I wanted to go to other teams and I got chosen by a team that hadn’t talked to me yet [to see] how I feel.”

Asked why the Pride were not her first choice, Fishel replies: “It's a rebuilding team. They have amazing players as well, like Marta and Sydney Leroux. But I was looking at bigger clubs like Portland Thorns or my coach in the [U.S.] Under-20s, Laura Harvey (now coach of OL Reign) – just the familiarity with her and I really liked how she coached.

When contacted by GOAL, the Pride said in a statement: "Ahead of the 2022 NWSL Draft, our general manager and coaching staff spoke to representatives for many of the top prospects, including Mia’s agent at the time, to ensure their interest and commitment in becoming a member of the Pride, which is standard practice for our club.

"We wish Mia the best of luck this season in Mexico and look forward to seeing her have a long and successful professional playing career." 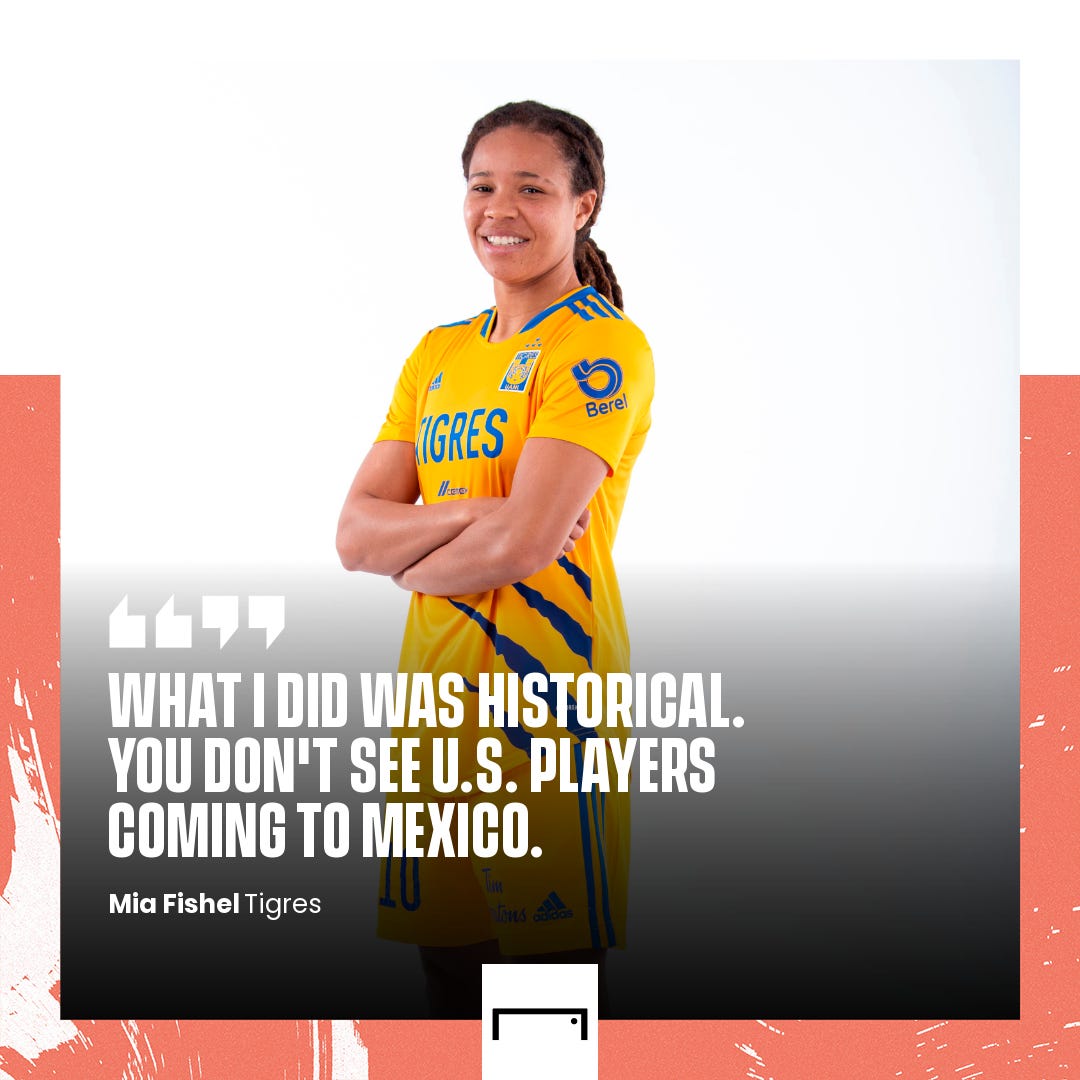 Frustrated with the hand she was dealt and yet to sign with Orlando, Fishel considered her options. In Monterrey, Tigres saw an opportunity to secure a statement-making signing, and the club was ready to pull out all the stops.

“I was looking at all my options, and Tigres came and reached out with an amazing presentation of what it means to be a Tigres player,” Fishel says, “their staff, their team, how they're built for champions, built for sold-out stadiums [have an] amazing fan base, have global media recognition. So it was really hard to pass up this opportunity.”

It’s difficult not to view Fishel’s signing as the opening salvo in a nascent battle for talent between the NWSL and Liga MX, whose chief Mariana Gutierrez Bernardez told GOAL last fall that her league wants to start importing top talent in a bid to become the “best league in the world.”

It is not clear if Fishel’s signing is the beginning of a movement or a one-off, but if Liga MX sides can continue to offer more money than the NWSL, as is reportedly the case for Fishel, then more players could look southward – or to Europe.

As of December 2021, U.S. Soccer no longer pays the NWSL salaries of its USWNT players, giving those players much more freedom to choose to play in leagues outside of the American top flight.

Between the new freedom of players, a draft system that restricts choice, and foreign clubs just discovering their checkbooks, the competition for talent has never been tougher for the NWSL.

One of the biggest manifestations of that growing threat hopes that she can serve as an example to others.

“I'm really happy and I hope that I can grow this league as well,” Fishel says, “creating another path for other players in the U.S. who may think that the NWSL is not their choice."