Maurizio Sarri had been expected to succeed Paulo Fonseca at the Olimpico, but the Giallorossi shocked everyone by hiring the ex-Inter boss instead

Jose Mourinho said he had no need for a break. He said he would be back in football soon. But nobody thought he would return this quickly, and certainly not at Roma.

It is 12 years since the former Inter boss began his infamous 'zero tituli' (zero titles) speech by taking aim at the Giallorossi, who remain without a trophy of any variety since their 2008 Coppa Italia triumph.

Mourinho, of course, made history at Inter, winning a treble in 2010. But that he is willing to take charge of one of their rivals should not come as a surprise.

The Portuguese has repeatedly made it clear over the years that while he retains a special bond with the Nerazzurri, he was a part of (Massimo) "Moratti's Inter" – and has no connection to the current regime.

"If one day I have to go to Italy and coach a rival club, I don’t think twice," he told The Times just this week. "I have this professional way of looking at things."

And the bottom line is that Mourinho was offered an important job just two weeks after being fired by Tottenham. In that context, his decision is perfectly understandable.

However, Tuesday's news that Mourinho will take over Roma this summer took Italian football completely by surprise, "an emotional earthquake", as former Roma director Walter Sabatini put it.

For once, there were no rumours, no leaks, no signs at all that a major deal was being done.

Indeed, whatever one thinks about the merits of hiring Mourinho, sporting director Tiago Pinto and club president Dan Friedkin deserve credit for keeping such a high-profile acquisition under wraps. 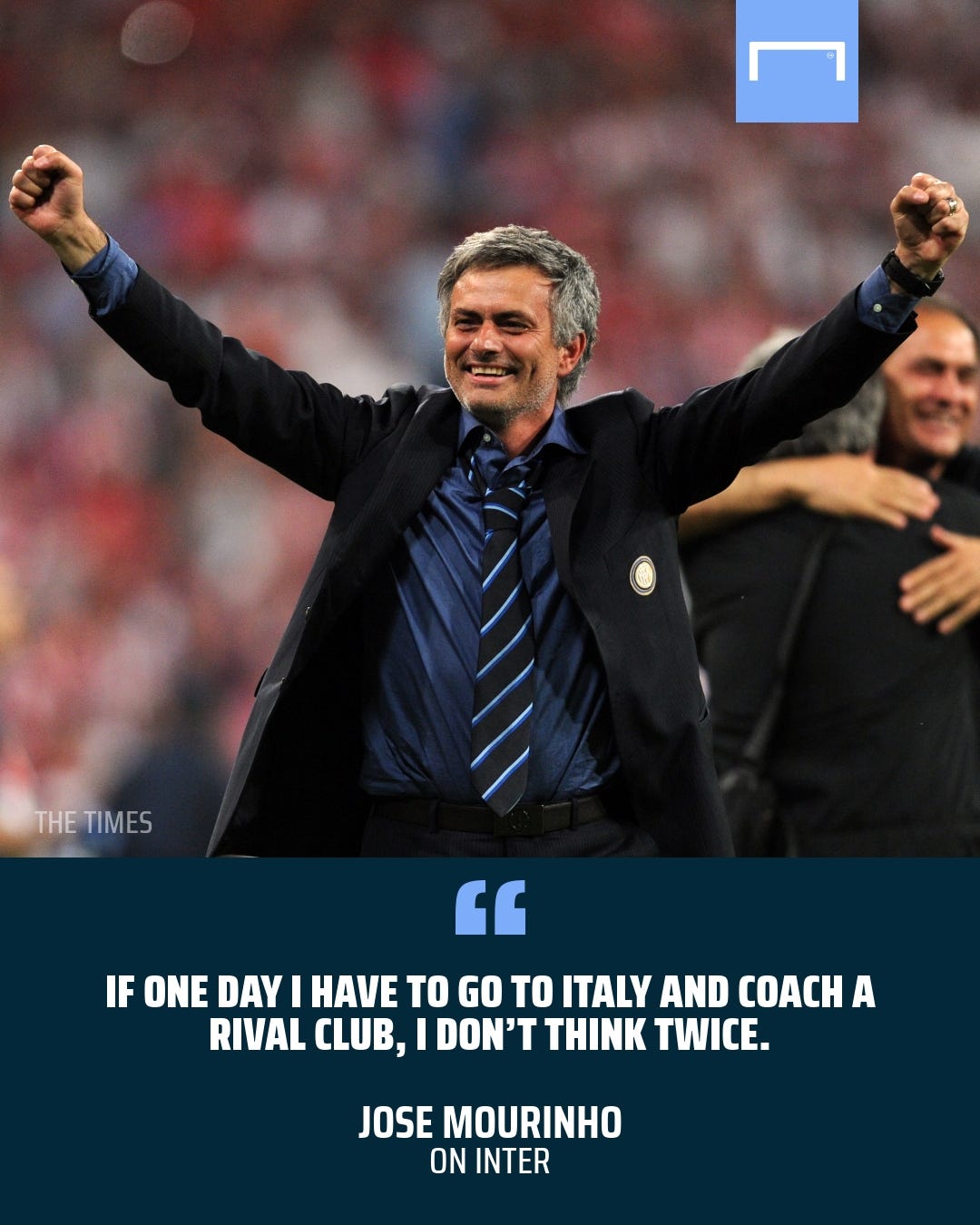 The day had begun with fresh reports that Maurizio Sarri was set to succeed Paolo Fonseca as coach. The Gazzetta dello Sport even ran an interview with Arrigo Sacchi in which he talked about his friend's imminent return to the world of coaching.

When Roma announced later that morning that Fonseca would step down at the end of the season, it felt like only a matter of time before Sarri's appointment was confirmed.

So, the announcement that Mourinho would, in fact, be the club's new coach sent social media into meltdown. Most fans thought it a joke, with some even wondering if Roma's official website had been hacked.

The news also had an immediate impact on the value of the Giallorossi's shares, which jumped more than 20 per cent on the stock exchange.

Mourinho's reputation has taken a battering in England over the past three years, given the disastrous nature of his final few months at Manchester United, coupled with the fact that he failed to win a trophy at Tottenham, and that hasn't gone unnoticed in Italy.

Paolo Di Canio, who covers Premier League football for Sky Sport Italia, has already gone viral because of a message he sent a Roma-supporting friend in which the former West Ham forward claimed that Mourinho is "the worst of the worst" and "finished in every conceivable way".

However, for the most part, the two-time Champions League winner remains a highly respected, almost mythical figure in Italian football, primarily because of his historic spell at San Siro.

There is no denying that times have changed, though. 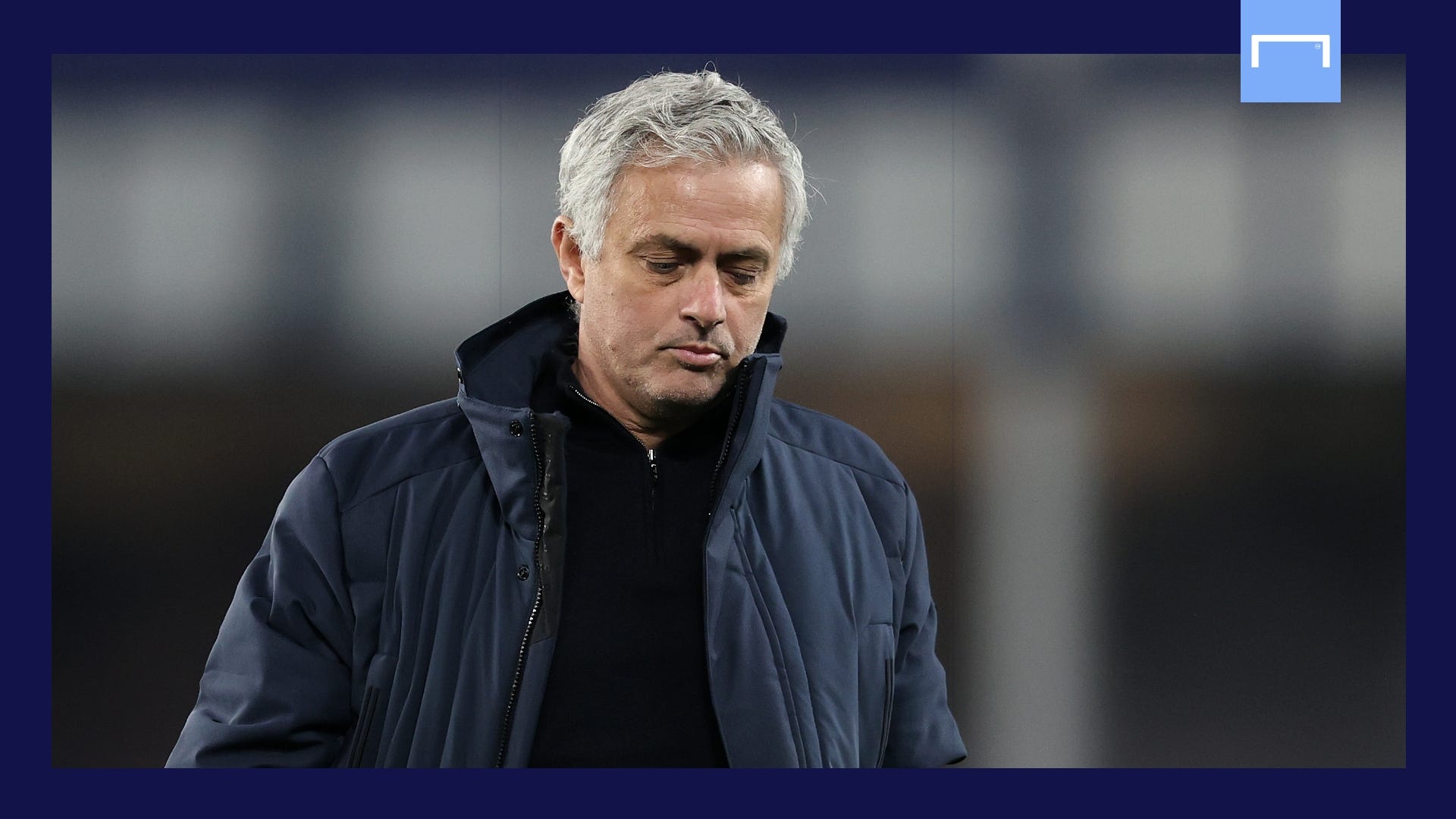 "Today's football is not what it was eight-to-10 years ago," Renzo Ulivieri, president of the Italian Football Managers' Association (AIAC) told the Gazzetta on Tuesday, "and Mourinho will have to be evaluated in that light."

Remember, when Mourinho took over at Inter in 2008, the Nerazzurri had just won back-to-back Scudetti, with Juventus still coming to terms with the effects of their Calciopoli-enforced relegation two years previously.

He may have subsequently constructed a masterpiece in Milan, but solid foundations had been laid under Roberto Mancini. Mourinho will be walking into a very different situation at the Stadio Olimpico.

Roma are Serie A's sole surviving representative in continental competition this season, but their elimination will be confirmed on Thursday night when they host United in the second leg of their Europa League semi-final.

The Giallorossi's shortcomings were ruthlessly exposed in last week's humiliating 6-2 defeat at Old Trafford and the only objective now is avoiding any further embarrassment on home soil.

Roma simply do not have a team capable of mixing it with Europe's elite. In reality, the current line-up can barely hold its own against Italy's finest, as underlined by the fact that in their 10 games against Serie A's top six sides so far this season, they have yet to register a single victory.

Such a dreadful record against their top-four rivals effectively put paid to any hope Roma had of qualifying for next season's Champions League, as well as Fonseca's hopes of earning a contract extension. 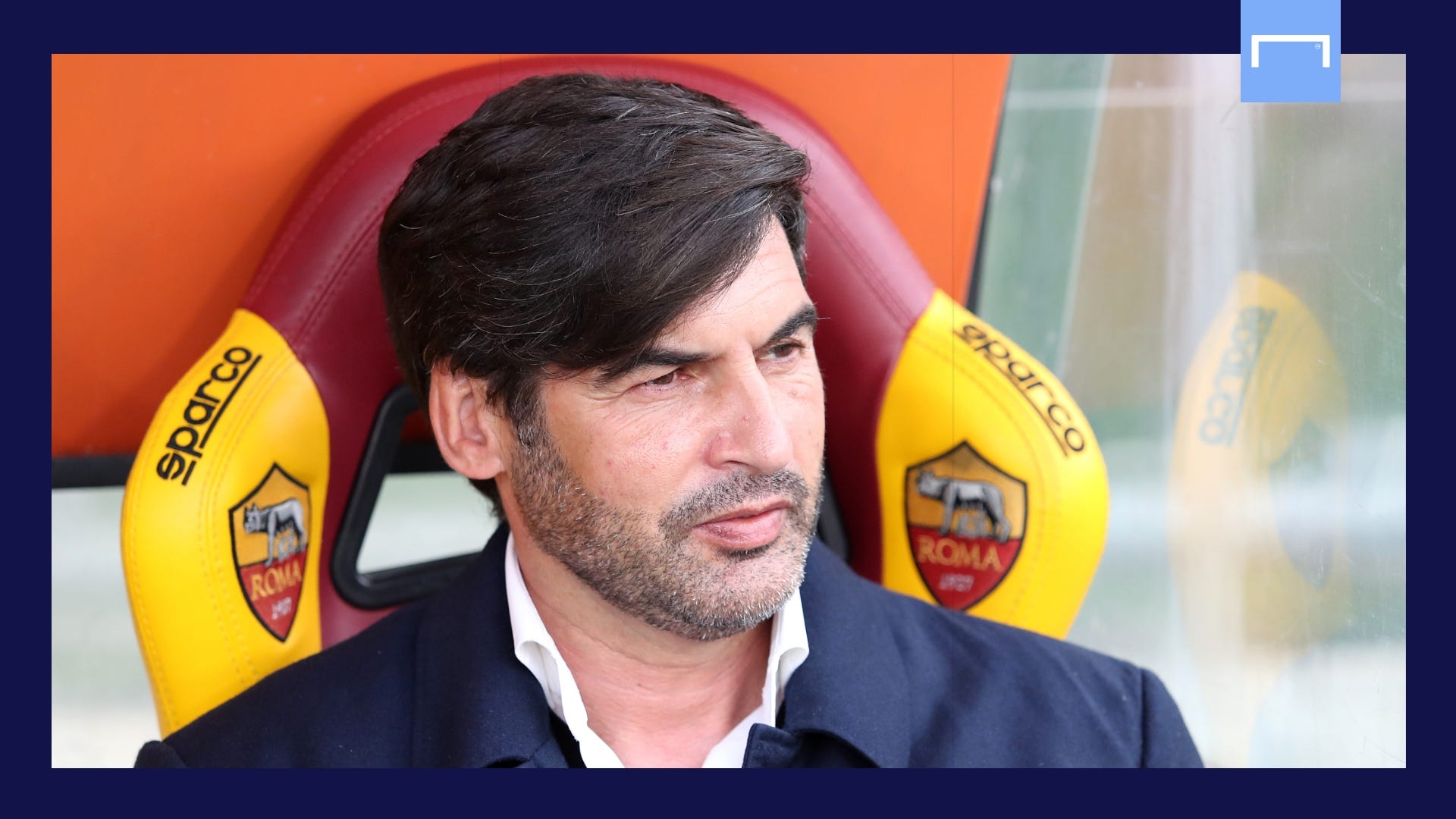 There has been some sympathy expressed for the outgoing coach, though.

He arrived during a period of great uncertainty at the club, with the long-mooted change of ownership, from James Palotta to Friedkin, delayed by the economic crisis caused by Covid-19, which in turn also hindered Roma's movement in the transfer market.

In addition, Fonseca's hopes of improving upon an encouraging first season in Serie A, which saw Roma finish fifth in the table, were ultimately undermined by a crippling injury crisis.

The Giallorossi had actually emerged as surprise title challengers by the turn of the year. After holding Inter to a 2-2 draw at the Olimpico on January 10, they sat third in the table. Their campaign quickly collapsed, though, as an already small squad was stretched to breaking point with a succession of muscular problems.

The big question now, then, is whether the Friedkin Group is in a position to spend big this summer.

Such a significant salary drop suggests that Mourinho, at this delicate juncture in his career, is far more motivated by silencing his critics than making money.

However, while he may have been happy to lower his wage demands to ensure a rapid return to football at a massive but success-starved club, it would be strange if a man who is never shy about speaking about signings has not been promised major investment in his new team.

He is not a coach renowned for coming into a new club and getting the best out of the players at his disposal. So, expect Pinto, who orchestrated Mourinho's arrival, to work closely with his compatriot's agent, Jorge Mendes, to strengthen the squad as shrewdly as possible this summer.

As Fabio Capello told La Presse on Tuesday, "It's not enough to sign a great coach in order to win. You also need players." 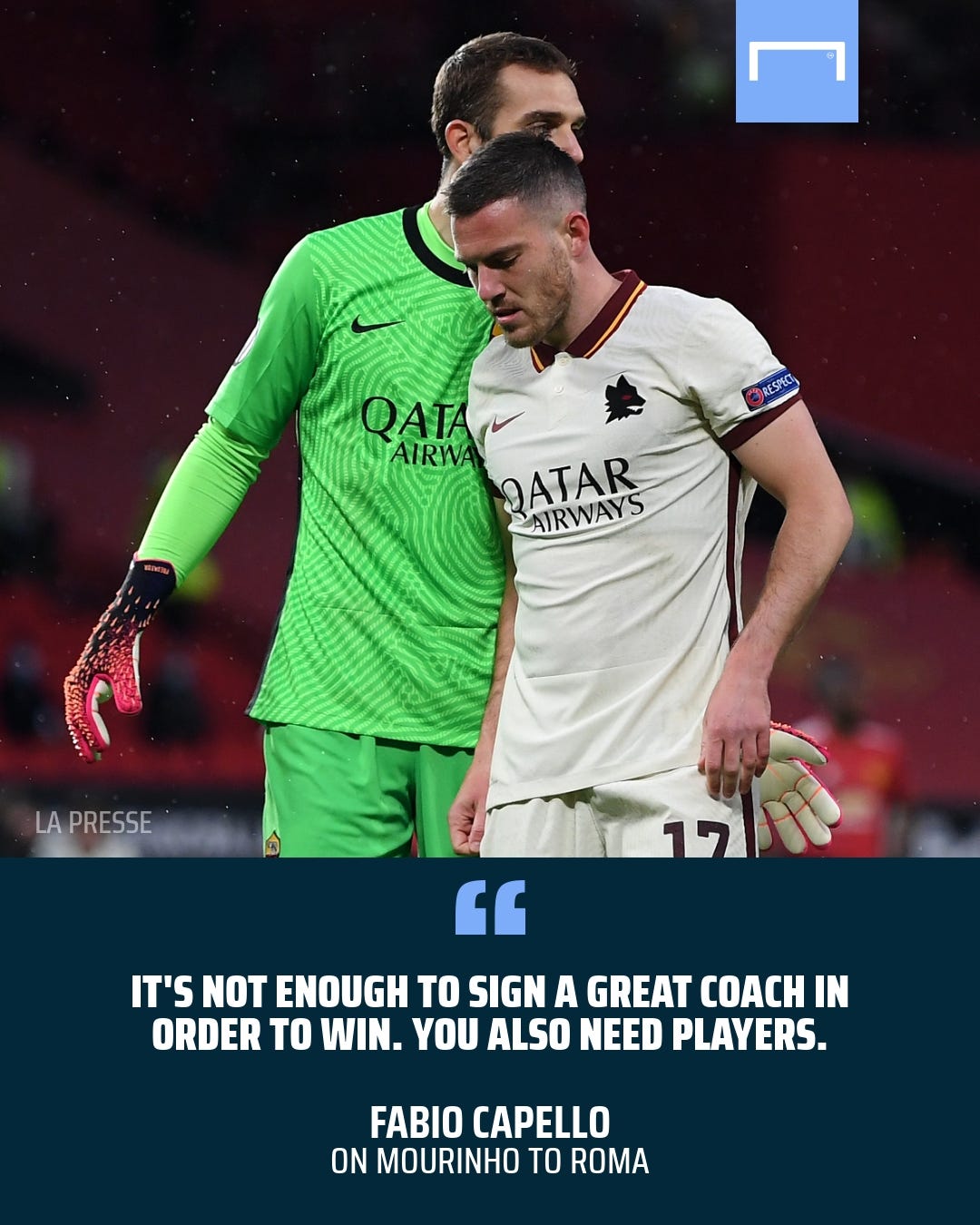 There is a talent at Roma, such as Jordan Veretout and, fitness permitting, Nicolo Zaniolo, but it is worth noting that two of their best performers over the past couple of seasons are Henrikh Mkhitaryan and Chris Smalling, both of whom had their issues under Mourinho at United.

Mkhitaryan, however, has at least claimed he learned a lot from Mourinho and praised his winning mentality, which is precisely why he has been hired by Roma's ambitious American owners.

We may be talking about one of the most famous clubs in the world, but there is no great culture of success at the Olimpico. As Sacchi has argued, there are all sorts of "historical and sociological reasons" for the fact they have only won three Serie A titles.

"Rome is a marvellous city, but it's difficult to resist its beauty and its temptations," the former Italy coach told the Gazzetta. "You have to be a truly great professional to avoid all of its traps."

Mourinho has not been drawn to Rome by its pitfalls, though; he is coming to exploit its vast potential.

After all, even if he were to claim a Coppa Italia in such a challenging environment, it would represent a major achievement for not only the capital club, but also a coach who has been accused of falling out of touch with the modern game.

It will be far from straightforward, though, particularly with the current set of players. Tuesday’s announcement proved that Mourinho retains his ability to stun the football world, but it would perhaps be even more surprising if managed to revive Roma without significant financial backing.

In landing 'The Special One', Friedkin has made one statement signing. There will need to be several more.

Otherwise, Roma will still end up with 'zero tituli'.