A car stopped at a set of traffic lights in the centre of Milan last Sunday week. There was a man hanging out the passenger-side window waving a blue and black flag around singing 'Campeones' over and over again.

A boy approached and asked, incredulous, "Are you really Lukaku?" And it was.

The one and only Romelu Lukaku. The newly-crowned "King of Milan". And Serie A champion.

Such a title means the world to Lukaku, as it's been a long time coming.

He may have won a Belgian title as a teenager with Anderlecht in 2010 but the striker hasn't lifted a single trophy since. He had been a member of the Chelsea squad that won the FA Cup and the Champions League in 2012 but he refused to even touch either piece of silverware.

"I didn't deserve to because I was not on the list," Lukaku told Het Nieuwsblad. "I don't touch a trophy I don't deserve."

He scored plenty of goals in the Premier League, of course, but has since admitted that there were times when he threw in the towel too easily.

His two-season stint at Old Trafford proved particularly trying. He was mocked over his first touch, dismissed as one-dimensional, accused of being overweight.

Lukaku made it clear to Manchester United he wanted out in the summer of 2019. He'd had enough of the flak, the frustration, the failure. He needed a change of scenery.

It was "now or never", as far as he was concerned. And there was only one place he wanted to go, one man he wanted to work with.

Antonio Conte first tried to sign Lukaku back in 2013, while in charge of Juventus.

The forward still remembers clearly how precisely the Italian coach explained how he would play under him. Or maybe that's just because Conte told him again in 2014. And again after taking over at Chelsea in 2016.

"If you become strong with your back to goal," Conte kept telling Lukaku, "you will be unstoppable." 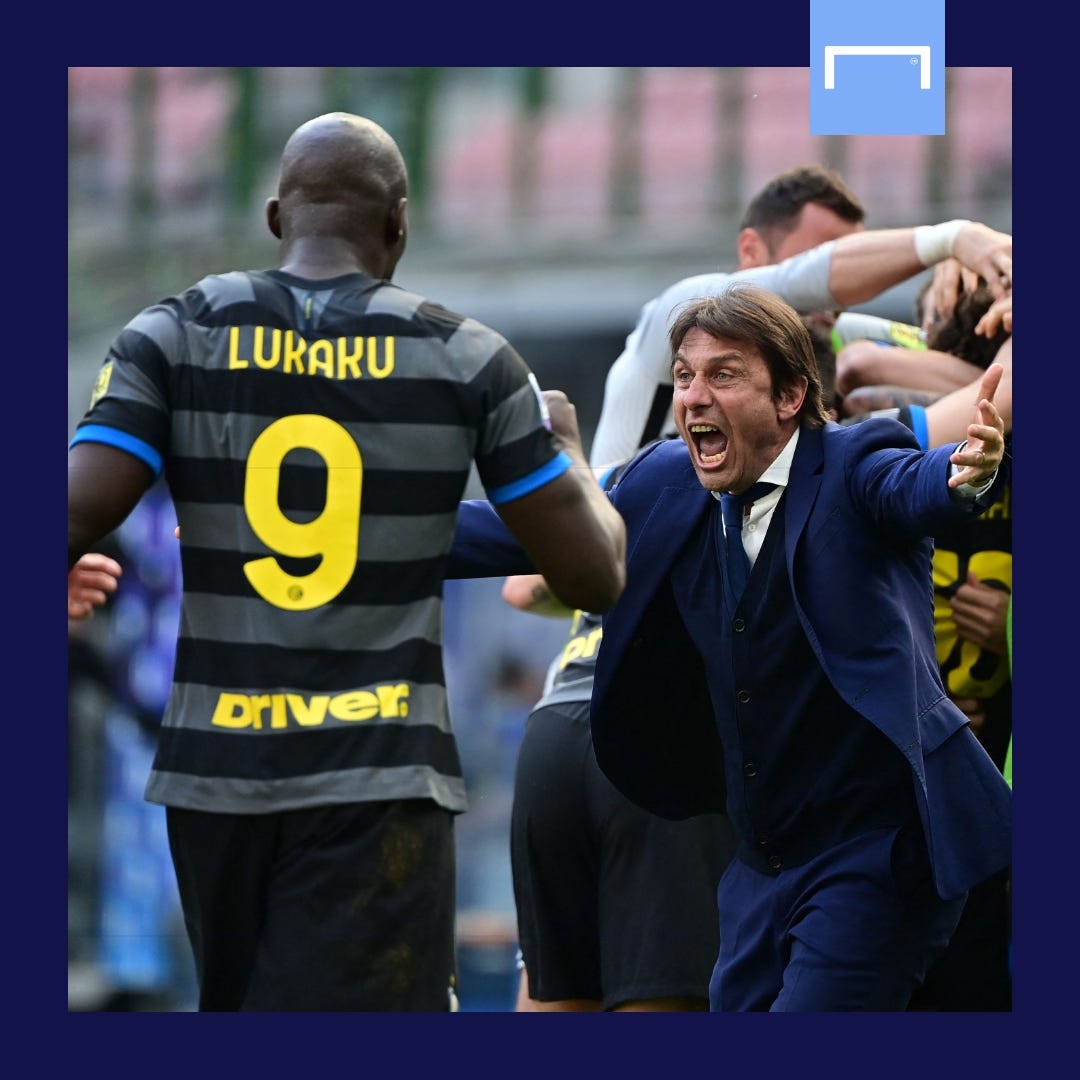 Conte has fought many battles with his employers during his time as Inter coach and his most important success was convincing the Suning Group to spend €80 million (£74m/$90m) on Lukaku in the summer of 2019.

"Only I know what I had to do to get him," the Lecce native told reporters last year.

Once he finally got him, though, the challenge then was convincing Lukaku to change his game. The imposing striker had not enjoyed being asked to serve as a traditional target man at Manchester United.

"I need to face the goal," he told the Lightharted Podcast. "That’s when I’m dangerous."

Conte, though, was adamant that Lukaku could become a much more rounded centre-forward if he took his advice on board. And, luckily, Lukaku was willing to listen.

When he arrived at Inter, he was advised against doing weights. That wasn't easy for a guy who had been bench-pressing 100kg at 15 years of age, but he embraced a new fitness routine, and a new diet.

“I've always been an explosive player with muscles but Italy took me to another level," he told Inter nutritionist Matteo Pincella. "I have never felt so strong. I have reached another level, physically and mentally.

“For how we play, we must have a very strong physique, as we run a lot. But since I have followed this lifestyle, I feel better on the pitch. I feel more reactive and faster.”

The results speak for themselves. Lukaku is playing better than ever.

Last year, he equalled Ronaldo's record for most goals in a debut season at Inter. This term, even more tellingly, he has been involved in more goals than any other player in Serie A (33).

As well as netting 22 times, a player that was once considered too slow and too cumbersome to contribute in build-up play at United sits joint-top of the assists charts, with 11. 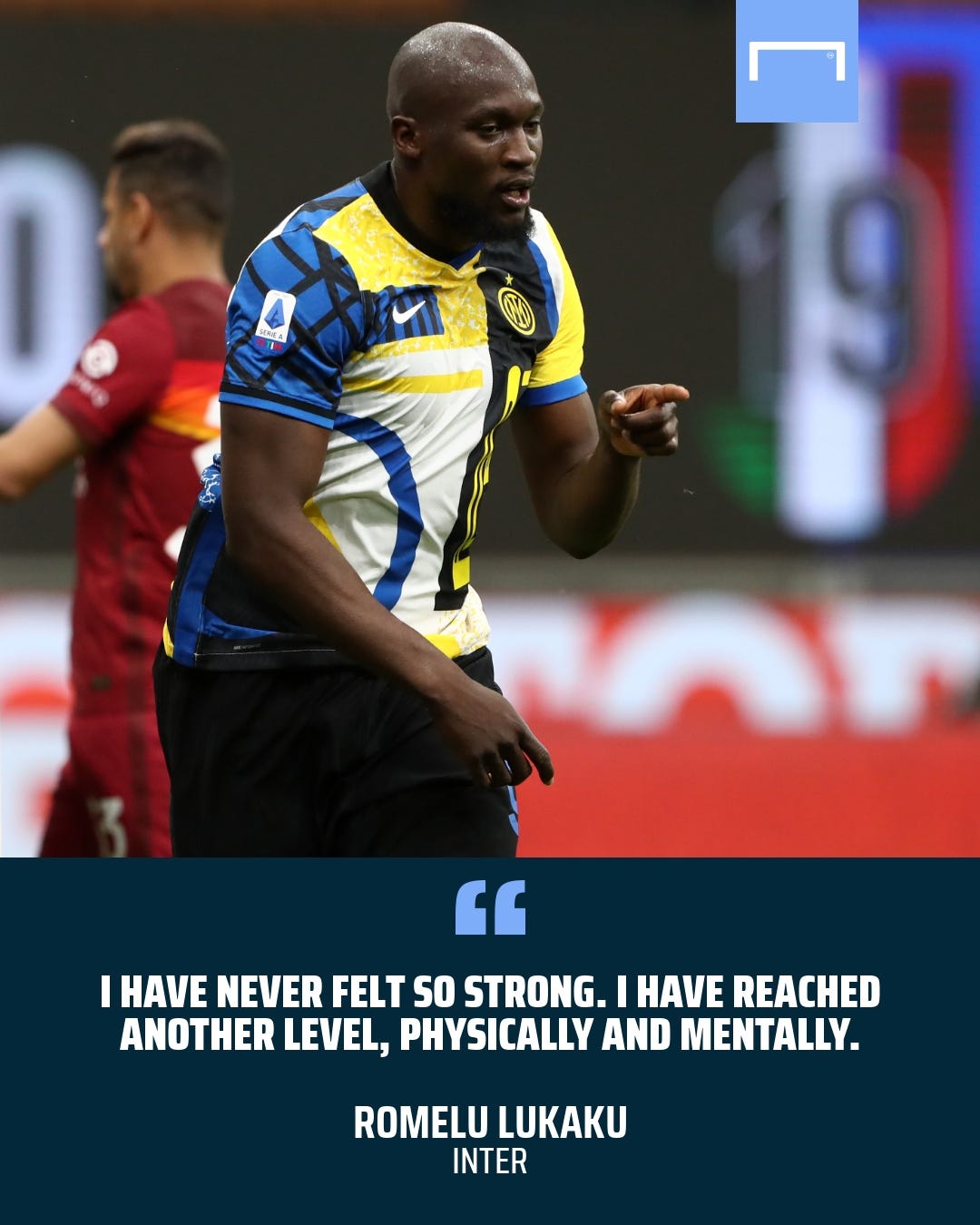 The talent and physical attributes have always been there, of course; the difference now is that they are being fully exploited.

Thursday's Covid-19 curfew breach was a rare misstep for a player who has demonstrated impressive discipline and dedication to his craft since arriving in Milan.

Conte has always said Lukaku was an "unusual forward", more like an "American footballer" in his physical appearance, but Inter fitness coach Antonio Pintus says that the Belgian is now "a complete athlete".

When asked by DAZN to compare his Inter team-mate to a basketball star, Nicolo Barella picked Shaquille O’Neal because both the giant American and Lukaku "make physical power their greatest strength", revealing, "Even in training, we need two or three players to stop him. He’s a force of nature!"

However, the midfielder promptly added, "But Romelu is also so much more." And that's now true.

Lukaku has obvious physical advantages but he is clever in how he uses them, intelligent in his movement, ferocious in his work-rate, and unselfish in his play.

He built up a rapport with Lautaro Martinez by often speaking Spanish with his fellow forward. Consequently, a close off-field friendship has turned into a prolific on-field partnership.

It was no surprise, then, to see Lukaku serve as the Master of Ceremonies for the mock boxing bout at Inter's training round on Thursday between Lautaro and Conte, who had had a touchline dust-up the night before.

He truly is an integral and unifying presence in the dressing room, beloved for making time for every member of the squad.

In a game against Genoa in December 2019, Lukaku passed up the chance to take a penalty so that Sebastiano Esposito could open his account in professional football. It was a gesture that the Inter academy product recently told Goal that he will never forget.

"Me, a 17-year-old boy, being cheered by the fans for taking the penalty after being passed the ball by one of the strongest strikers in the world: I think it was a unique emotion," Esposito enthused. "He always gives me many tips, even with off-the-pitch stuff. We write to each other often." 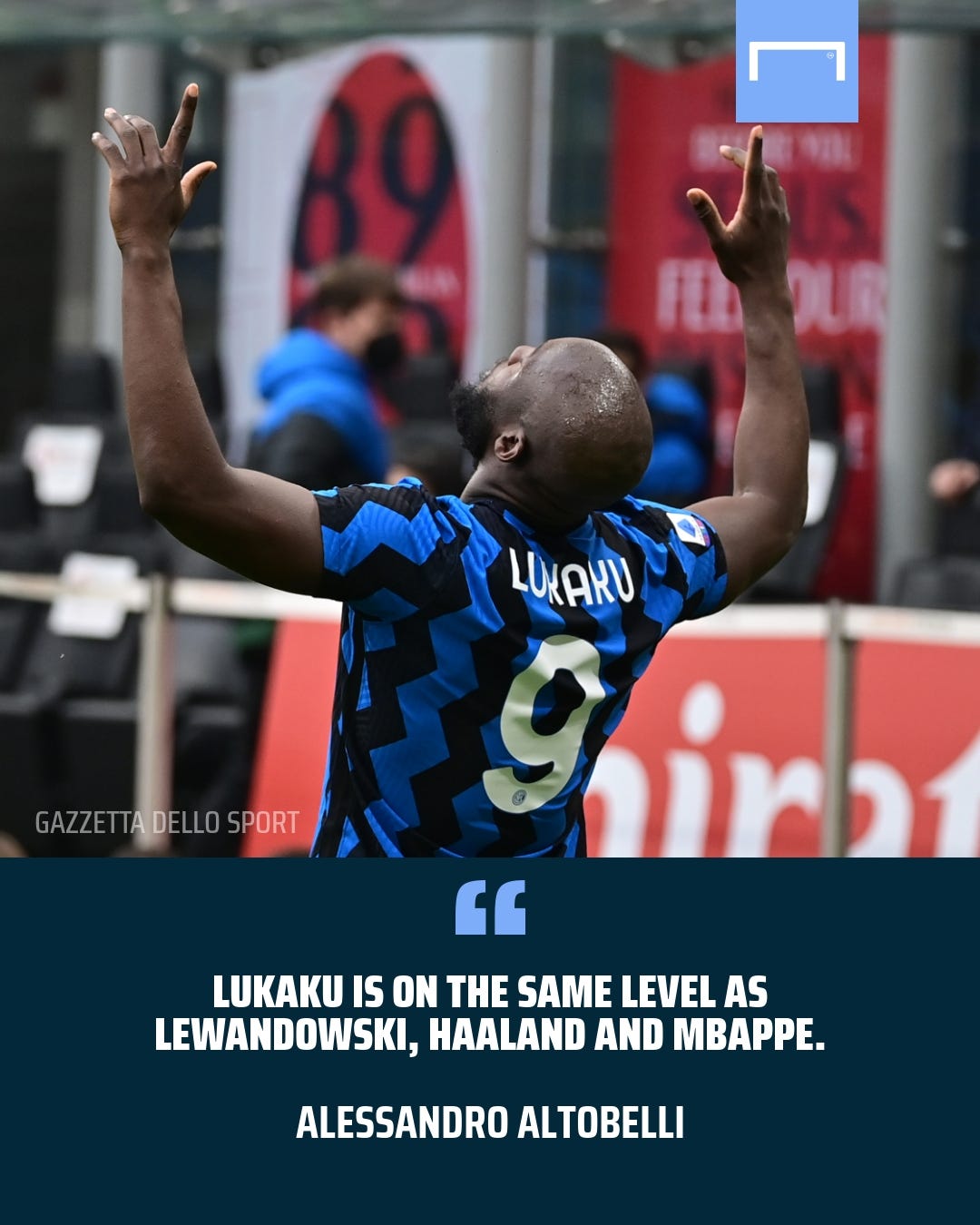 Lukaku's influence at Inter, then, extends well beyond the field. He has become an unofficial captain, an inspiration to team-mates, not only for tackling racism, but also for the way in which he has proven so many people wrong.

Inter icon Alessandro Altobelli admitted that he had thought Lukaku "an average player" when he arrived at San Siro. Now he considers him "a great leader who always helps his team".

"For me," Altobelli told the Gazzetta dello Sport, "Romelu is on the same level as (Robert) Lewandowski, (Erling) Haaland and (Kylian) Mbappe."

Enzo Scifo and Ivan Zamorano are in total agreement, while Luca Toni says Lukaku is now "a more complete forward" than Cristiano Ronaldo.

Whether one agrees with that view is irrelevant. What matters is that it's a valid argument.

When they face off in Turin this Saturday evening, they will do so as equals. Ronaldo may have scored more goals in Serie A this season, but Lukaku is now the league's undisputed MVP.

He deserves such a lofty status because while Conte has undeniably played a pivotal role, Lukaku has made this happen for himself.

It was he who decided he needed to change, he who was willing to make the sacrifices required to become one of the very best players on the planet.

This transformation isn't about his physicality. It's about his mentality.

As striking legend Didier Drogba said after Inter's Scudetto was confirmed, “Put some respect on his name. Romelu Lukaku. CHAMPION."