Achraf Hakimi wasn't best pleased at being left out of EA Sports' Serie A Team of the Season.

"What a joke!" he wrote on Twitter. "If you have something against me, tell me! This is bull!"

His reaction may have been a tad over the top but Hakimi certainly had a point.

Juan Cuadrado, who was picked ahead of him at right-back, had an excellent campaign and was arguably the most consistent performer in an erratic Juventus side, along with maybe Federico Chiesa. Indeed, it's worth noting that the versatile Colombian racked up more assists than any other defender (10) in Serie A last season.

However, Hakimi struck a fine balance between scoring and creating goals for Inter, who ultimately ran away with the Scudetto.

The Morocco international netted seven times in the league and racked up eight assists, proving himself one of the finest exponents of the wing-back role in the game today.

That he excelled at Inter came as no surprise either.

He always looked perfectly suited to Antonio Conte's 3-5-2 formation, having flourished in the same system at previous club Borussia Dortmund, so his €40 million (£36m/$45m) transfer fee was always likely to prove a bargain.

Conte, of course, had known first hand just how effective Hakimi could be down the right flank. The former Real Madrid man had run riot in Dortmund's Champions League group-stage win over Inter in November 2019, scoring twice in a 3-2 win.

So, as soon as it became clear that a deal was possible, Conte called Hakimi last summer to convince him to move to Milan.

"He asked what I wanted from my future, then explained how we would play and my decisive role in his aggressive style of football, as the fifth man between defence and midfield," the 22-year-old told the Gazzetta dello Sport just last month.

“We talked a lot and, seeing how things went, I can say that I made the right choice. I knew that straight away." 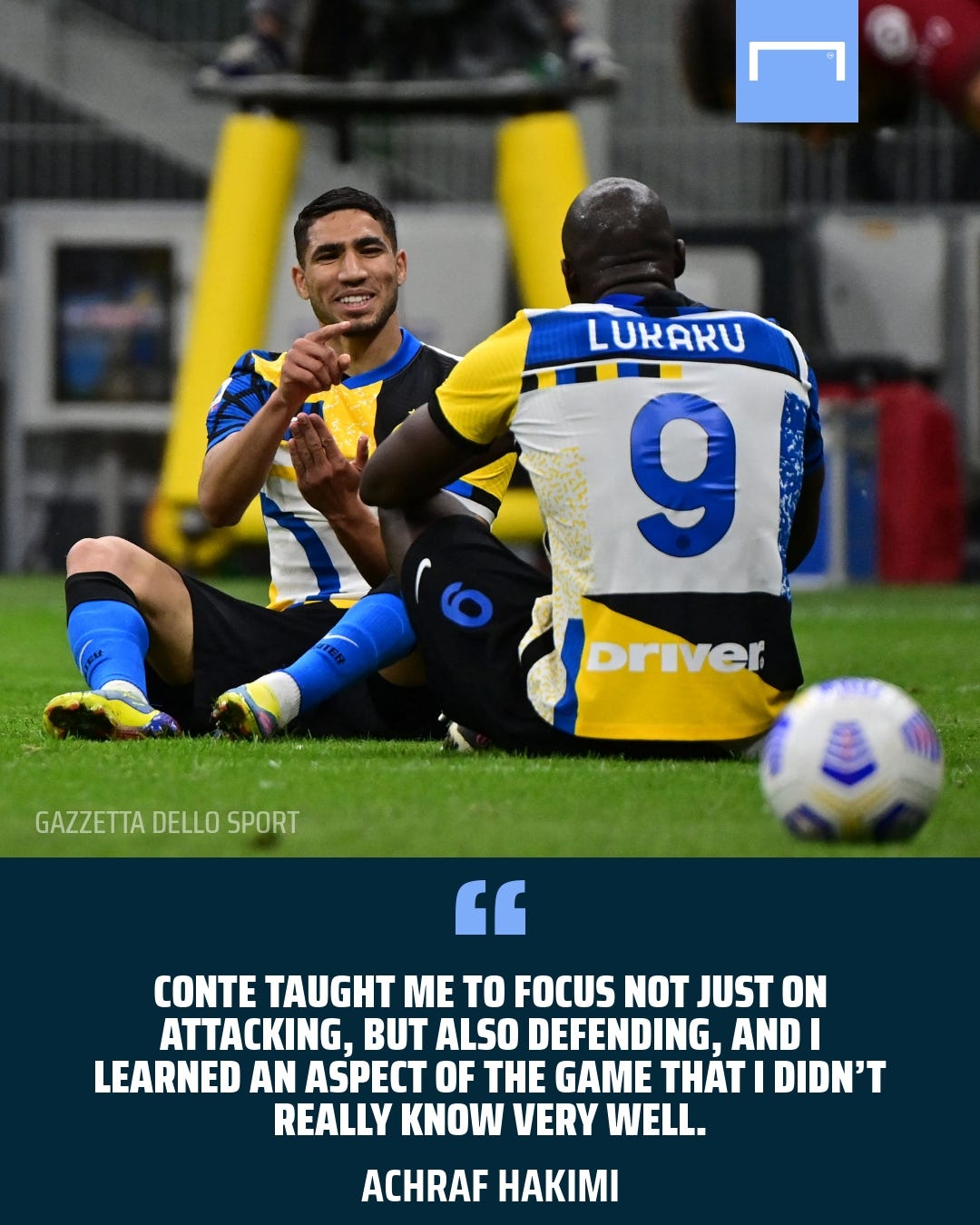 His game certainly went to a whole other level under Conte. He has become a more rounded player thanks to the Italian's meticulous attention to detail.

"He taught me to focus not just on attacking, but also defending, and I learned aspects of the game that I didn’t really know very well," Hakimi confessed. "I have improved a great deal over the last year."

And the remarkable thing is, Hakimi can become even better, which is why he is now one of the most in-demand players on the transfer market.

As soon as it was confirmed that Conte had left Inter because of the club's financial troubles, much of the media attention centred on whether Romelu Lukaku or Lautaro Martinez would follow him out the door.

However, it is Hakimi who looks set to be the first high-profile departure at San Siro, with Chelsea and Paris Saint-Germain vying for his services.

As it stands, both sides are offering €60m (£56m/$79m) but cash-strapped Inter are looking for €80m (£69m/$96m) in the hope of ensuring that Hakimi is the only high-profile player they have to sacrifice this summer.

Chelsea fans are understandably perplexed as to why their club feels compelled to spend big on a right-sided defender, given Reece James underlined his considerable quality by shutting down Raheem Sterling in the Champions League final.

However, while James is a fine player, there is no denying that Hakimi has many more weapons in his armoury.

His versatility would also allow Blues boss Thomas Tuchel to switch between a back four and a three-man defence next season without losing any attacking threat out wide.

The prospect of him lining up in the same side as fellow Chelsea transfer target Erling Haaland is also mouth-watering. 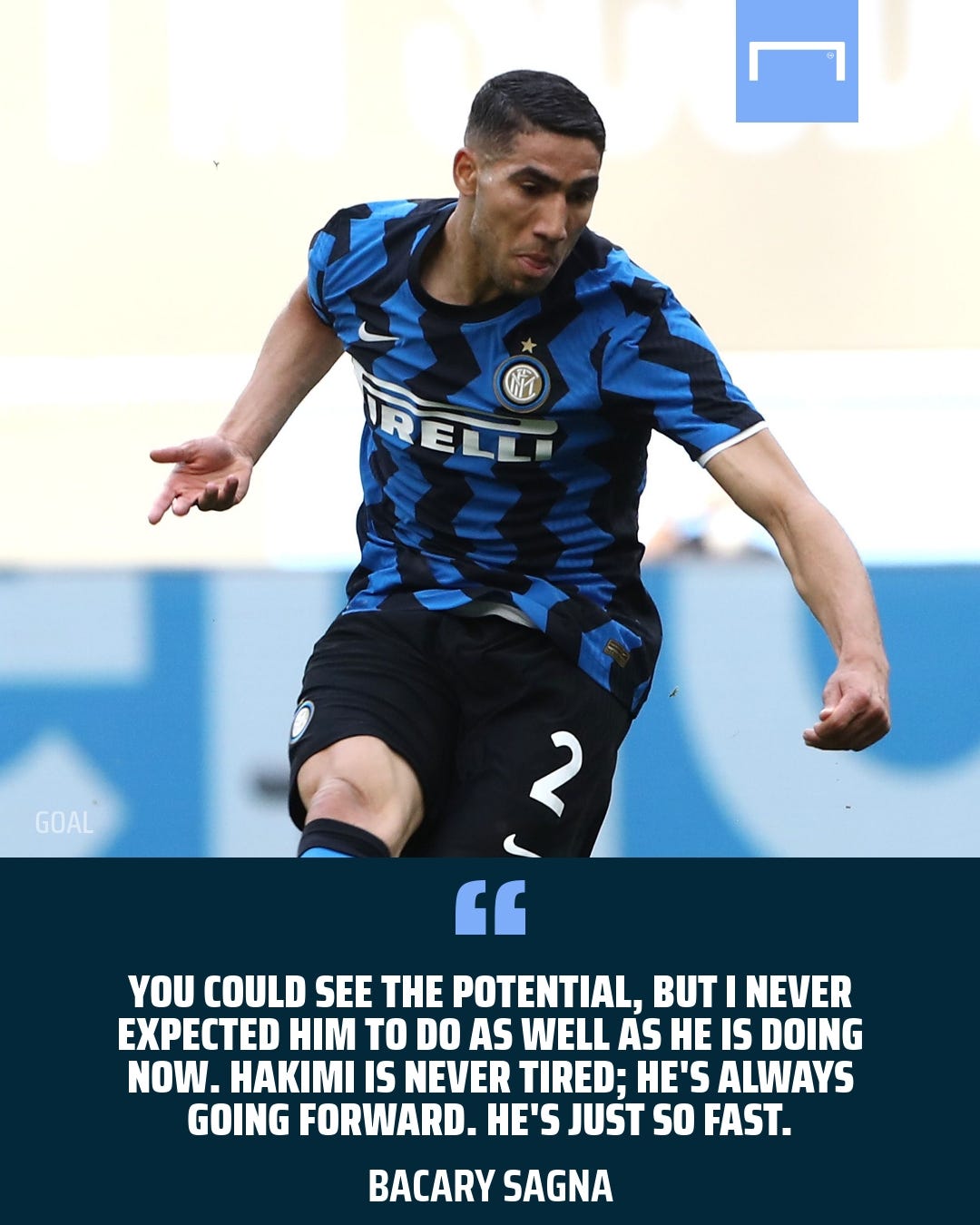 After all, we're talking about a player that even the great Ronaldo has admitted he would have loved to played alongside.

"Sometimes I think: 'Ronnie, imagine you and him,'" the Brazil legend told the Gazzetta. "We would go at a decent speed!

"Inter signed an extraordinary player in Hakimi. It was a mistake for Real Madrid to let him go."

It certainly was, but then, Hakimi hasn't just benefited enormously from Conte's coaching; his two-year loan at Dortmund also played a pivotal role in his remarkably rapid growth since leaving his native Madrid.

When he was on Real's books, it was clear that he was player of great promise. He was even included in the 2017 NXGN list of the world's most gifted young players. However, former Blancos boss Zinedine Zidane never seemed fully convinced.

He wasn't alone in that regard either.

“I was surprised when I saw him playing for Madrid because, for me, he was not that good," former France and Arsenal right-back Bacary Sagna admitted to Goal.

"You could see the potential, but I never expected him to do as well as he is doing now. Hakimi is never tired; he's always going forward. He's just so fast."

His blistering breaks were one of the highlights of Inter's stunning Serie A success and were it not for their economic issues, there is no way they would have ever considered selling him.

After all, Hakimi was the best right-back in Serie A last season. Even if EA Sports might disagree.