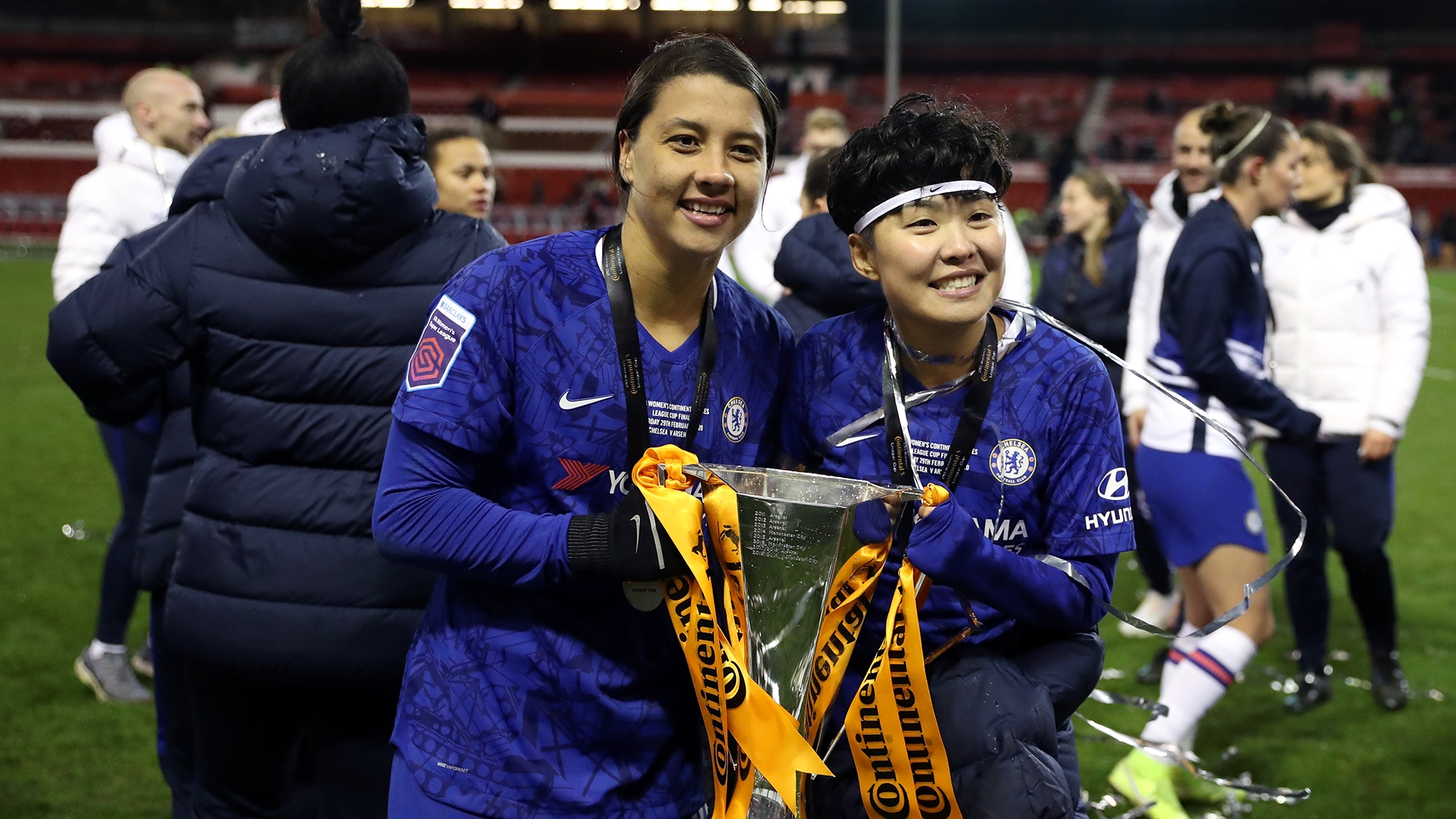 Sam Kerr hopes Chelsea’s Continental Cup victory on Saturday is just a taste of what’s to come as the Blues pursue a domestic treble.

The Australia international played a key role in creating the winning goal against Arsenal on Saturday, with Beth England on the end of a Maren Mjelde cross to win it for Chelsea in stoppage time.

It was a goal that sealed the Blues’ first ever win in this competition and, after her move from Chicago Red Stars in November, Kerr’s first trophy with the English club.

“The last few times I’ve been to a final I’ve lost so it feels really good,” the 26-year-old said.

“Obviously, it wasn't easy tonight, but we got the job done and that's all that matters really.

“The whole team already knew we had that in us, but it shows a lot of other people we have that in us.

“We showed we’re not going to give up and tonight was a team effort, not just for tonight but for however long it’s taken us to get here.

“To do it with this group, it’s an amazing feeling. It’s no secret I came to Chelsea to win trophies and this is one of three boxes ticked for this year.

“We’re definitely going to celebrate tonight but come tomorrow and come after the international break it’s back to work.

“You’ve got to enjoy these moments, they don’t come around often as a footballer, so we’ll enjoy this one. It does make us hungrier and there’s a lot to do.”

There were a number of stand-out performers on the night, including Ann-Katrin Berger, the Chelsea goalkeeper making a number of wonderful saves to keep her team in it.

“We see it every day at training, she’s quite annoying to practice against!” Kerr laughed.

“That’s no surprise to us, we were lucky to have her in goal tonight.”

But England will grab the headlines for her two-goal performance in what was a 2-1 win for Chelsea, and deservedly so, according to her strike partner.

“Any time a striker is scoring as many goals as Beth, they’re going to get all the media attention and she deserves it,” Kerr added.

“She’s worked hard, she’s been unbelievable, she’s a good team-mate and she does a lot of work off the ball too.

“She scored the two goals, but she gets through a lot of work.”

While the Women’s Super League is certainly seeing the best of Chelsea’s No.9 this season, Kerr is still settling into her new surroundings.

The forward is only recently back from international duty with Australia, having played for the Matildas in Olympic qualifiers that came outside of a Fifa window, and will head back over to her homeland to continue that campaign this week.

With injuries and illness also coming into play, and the fact that she didn’t play for two months before making her Chelsea debut, Emma Hayes said that her new signing is nowhere near her best yet – with what is to come sure to be exciting.

“I’ve been really enjoying it. The team has been amazing, they’ve helped me a lot, the hardest part has probably been the cold,” Kerr said of her time in England so far.

“It’s just been hard to adjust to, I’m not used to it or playing in freezing cold weather and I’ve picked up a few injuries from it.

“But the club’s amazing, the staff are amazing, the team is amazing and I’m actually really enjoying living in London.

“I came off a break because I needed a break, I hadn’t one in eight or nine years.

“I still think I have so much more to give and honestly the hardest part is just getting to know how the girls play.

“As a striker, I want to score more but I’m not putting pressure on myself. I feel like I’m impacting the games and that’s what’s so great about this team, there’s so many players who can have an impact.

“I think more of the tiredness hasn’t come from not having a pre-season, it’s come from all the travelling around the world.

“People don’t realise it takes me 25 hours to get home! I did that 10 days ago and I’m doing it again tomorrow.

“It’s not easy as an Australian footballer but that’s our job and we do it for the love of it.”