When it was announced that the Bundesliga would be the first of Europe's top five leagues to resume following the coronavirus-enforced shutdown, it promised to offer a glimpse into football's future.

Not only would it showcase the various adaptations the professional game would have to make be played in the aftermath of a pandemic, but also offer viewers a smorgasbord of talented young players who look set to be among the very best on the planet over the next decade.

From Erling Haaland to Jadon Sancho to Alphonso Davies to Kai Havertz and beyond, the German top flight is arguably unmatched at present when it comes to developing stars of the future.

Few, though, expected the first round of fixtures upon the league's restart to include a team chasing a top-four finish and Champions League football handing a full debut to their youngest ever player and the third-youngest in the league's history.

That is exactly what happened, however, after Florian Wirtz was named in Bayer Leverkusen's starting line-up for their 4-1 win over Werder Bremen on Monday evening.

Aged just 17 years and 15 days, the attacking midfielder beat Havertz's club record as their youngest player and ranks only behind Nuri Sahin at Borussia Dortmund and Yann Aurel Bisseck at Koln in the league's standings for the most junior debutant. He joins Harvey Elliott of Liverpool and Rayan Cherki of Lyon as the only players born in 2003 or later to play in one of Europe's top five leagues.

Despite his lack of experience Wirtz handled himself well, and if Havertz is to continue being deployed as a false nine then the teenager is likely to be given more opportunities as the final fixtures of the campaign are played out.

"He was important for us," said Leverkusen boss Peter Bosz at full-time. "He played well from the start, held onto the ball and played well going forward. 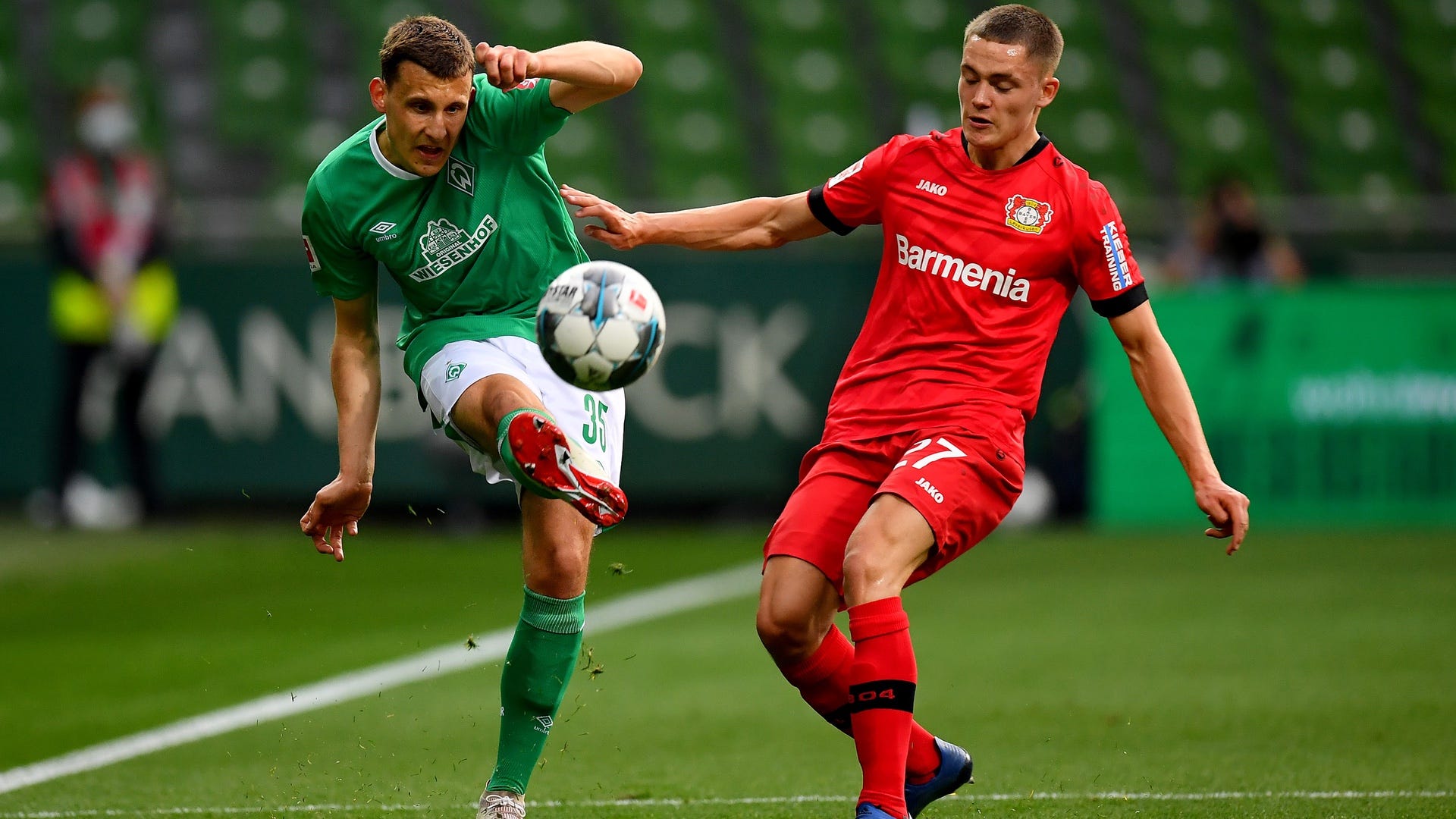 "It's always something special when you make your debut, especially when you're 17, but he wasn't nervous. All in all, it was a good performance by him."

It is perhaps unsurprising that Bosz, who previously worked with a number of talented youngsters at both Ajax and Dortmund, was keen to throw Wirtz in at the deep end given the role the Dutchman played to get him to the club.

Bosz was joined by Leverkusen CEO Fernando Carro, managing director Rudi Voller and sporting director Simon Rolfes inside the BayArena at the start of the year as they discussed their plans for the January transfer window. It was decided between them that they make their move for Wirtz, who has long been touted as one of the best young players in Germany.

The only issue? They risked the wrath of Wirtz's club Koln and fellow Rhineland rivals Borussia Monchengladbach, with the three teams having made a gentleman's agreement back in 2001 that they would not attempt to sign youth players from one another so as to help ensure there were as many strong clubs in the region as possible.

Wirtz has been at Koln since the age of six having originally begun his footballing education at junior side Grun-Weiss Brauweiler, and over the past decade has risen through the ranks to be talked about as one of the great new hopes of German football. He helped Koln's Under-17s win the national title in 2019 after they beat Dortmund in the final, though he suffered a knee ligament injury over the summer that saw him miss the opening weeks of the current campaign.

He wasted little time in playing catch up, however, and netted eight goals in 10 appearances for Koln's U17s, including a hat-trick in what proved to be his final appearance against Wuppertal. It was understandably a game to remember, with a video of him opening the scoring with a shot from the halfway just five seconds into the 10-0 victory going viral in his homeland.

While that may have catapulted Germany youth international Wirtz into the public eye, in truth he had already caught the attention of a number of Europe's top clubs, who in turn were preparing to take advantage of the teenager's curious contract.

Once a player in Germany reaches U16 level they are offered a three-year youth contract, which in turn includes a clause where an additional year can be negotiated on more lucrative, professional terms. Wirtz, whose parents act as his advisors, rejected that deal, and instead insisted that his contract be only two years in length and not include the clause.

That was in the summer of 2018, and it has not gone unnoticed in Cologne that at the same time Wirtz's sister and Germany U19 international, Juliane, left Koln for Leverkusen herself. Conspiracy theories continue to be drawn up, but with just six months of Wirtz's deal remaining in January 2020, clubs from both Germany and further afield began to circle in the belief that he could be available as a free agent come the summer.

"The boy has a huge talent. He could have gone to Liverpool, to Bayern Munich, to Dortmund. Everyone wanted the boy," Leverkusen youth coach, Patrick Helmes, told Sport1 after Wirtz's arrival. "What he has are things you cannot learn."

Leverkusen sporting director Rolfes told Goal and SPOX of their long-standing interest, saying: "I have known the player since he was 14. The possibility arose surprisingly because his contract was expiring, and so we tried.

"I knew that many clubs were interested and so we thought that before he went anywhere else, let's try to get him to come here and stay close to home." 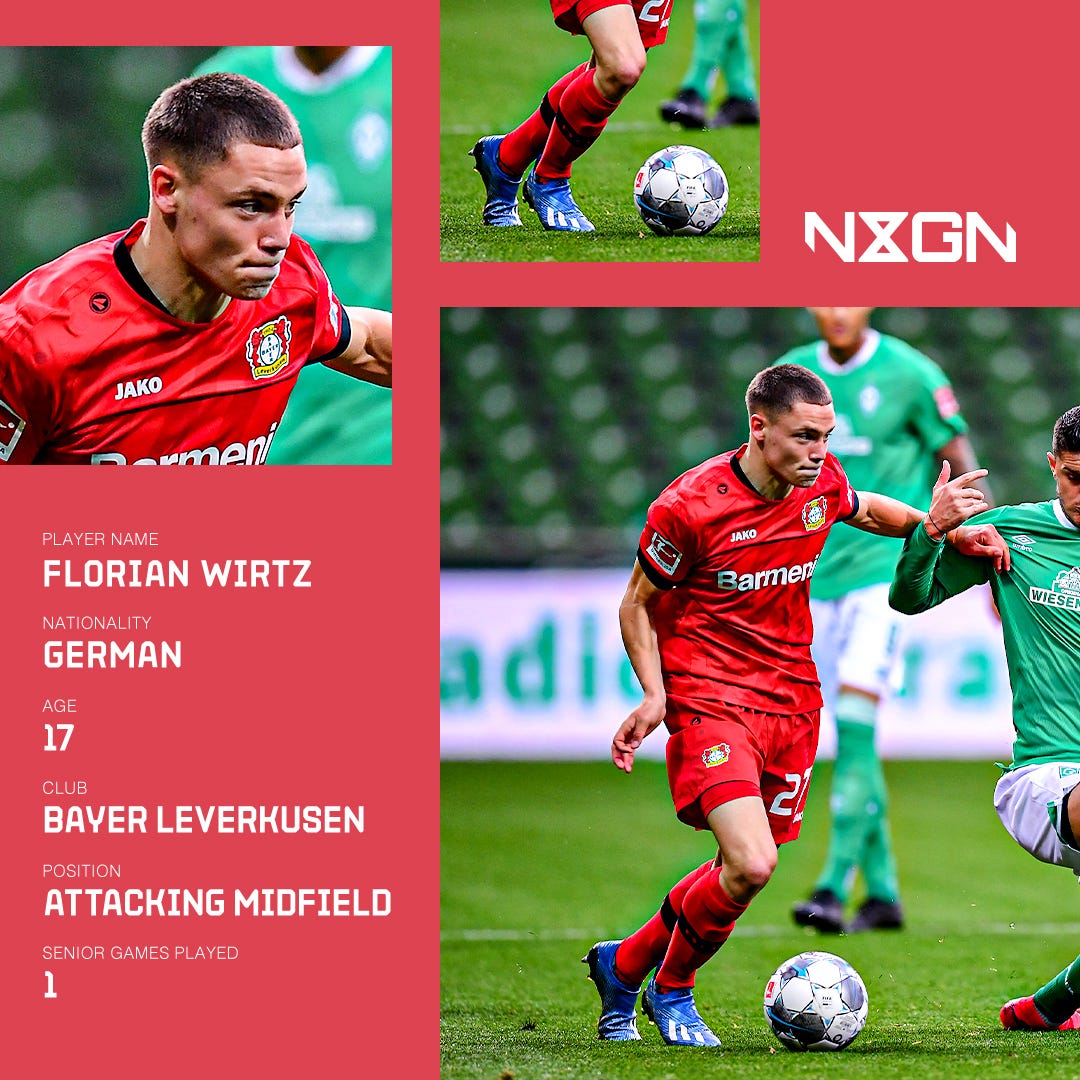 Given their long-standing agreement, the deal has left Koln furious. Leverkusen argue that due to the differences in Wirtz's contract from other players his age, he is in fact a professional rather than a youth player. Koln, who received a negligible fee in compensation for a player who has been described as the "best player to come through their academy in 30 years", have been left dumbfounded.

To his credit, Wirtz has not let the controversy surrounding his transfer affect him. In his first four matches for Leverkusen's U19s side he scored two goals and laid on three assists before Covid-19 decimated the footballing calendar. That limited sample size was clearly enough, though, for Bosz to trust him to make the step up to the senior ranks two months later.

"We showed Florian in our talks that, from a sporting perspective, he would benefit from being here," Germany legend Voller wrote his column for Kicker back in January. "In the past we have given many young players such as Kai Havertz, Julian Brandt and Benjamin Henrichs the chance to play early on, and even play in the Champions League."

Leverkusen currently find themselves a point off the Champions League places ahead of Saturday's meeting with third-placed Gladbach, during which Wirtz is likely to be given another chance to both impress the watching global audience and make other clubs rue missing out on one of Germany's brightest young prospects.