Which team should you take over in Career Mode and guide to the top? Goal takes a look at the best options this season

Career Mode is one of the most popular parts of FIFA 22 and has more clubs than ever this year waiting for you to turn into superpowers.

Which teams should you manage in Career Mode in FIFA 22? Do you want a difficult challenge or do you want something appealing by taking over a huge club with a mega squad?

Do you want to start outside Europe's 'big five' leagues or even work your way up from a lower league to turn an unheralded side into continental champions?

Which team should you take over in Career Mode and guide to the top?

Goal takes a look at the best options this season.

Ajax are always one of the most interesting teams to manage in Career Mode in FIFA.

They have a Critical requirement for Youth Development, but also expect domestic success every season.

As a result, you will have to bring through plenty of youth players, which requires a wide scouting network as well as careful tutoring and training of your prospects.

Keeping these young players at the club will be a challenge, as seen by Ajax in the real world after their impressive Champions League run in 2018-19.

Do you 'trust the process?' Or do you think Arsenal need a new process?

Once the best team in England, the Gunners went undefeated in the Premier League in 2003-04 but have not won England's top flight since then.

Arsenal have never won the European Cup nor Champions League, so may need a fresh approach to become kings of Europe for the first time in their history.

They have a good initial budget, allowing you to expand their squad and add to the core of players that Mikel Arteta has brought to the club in recent years. 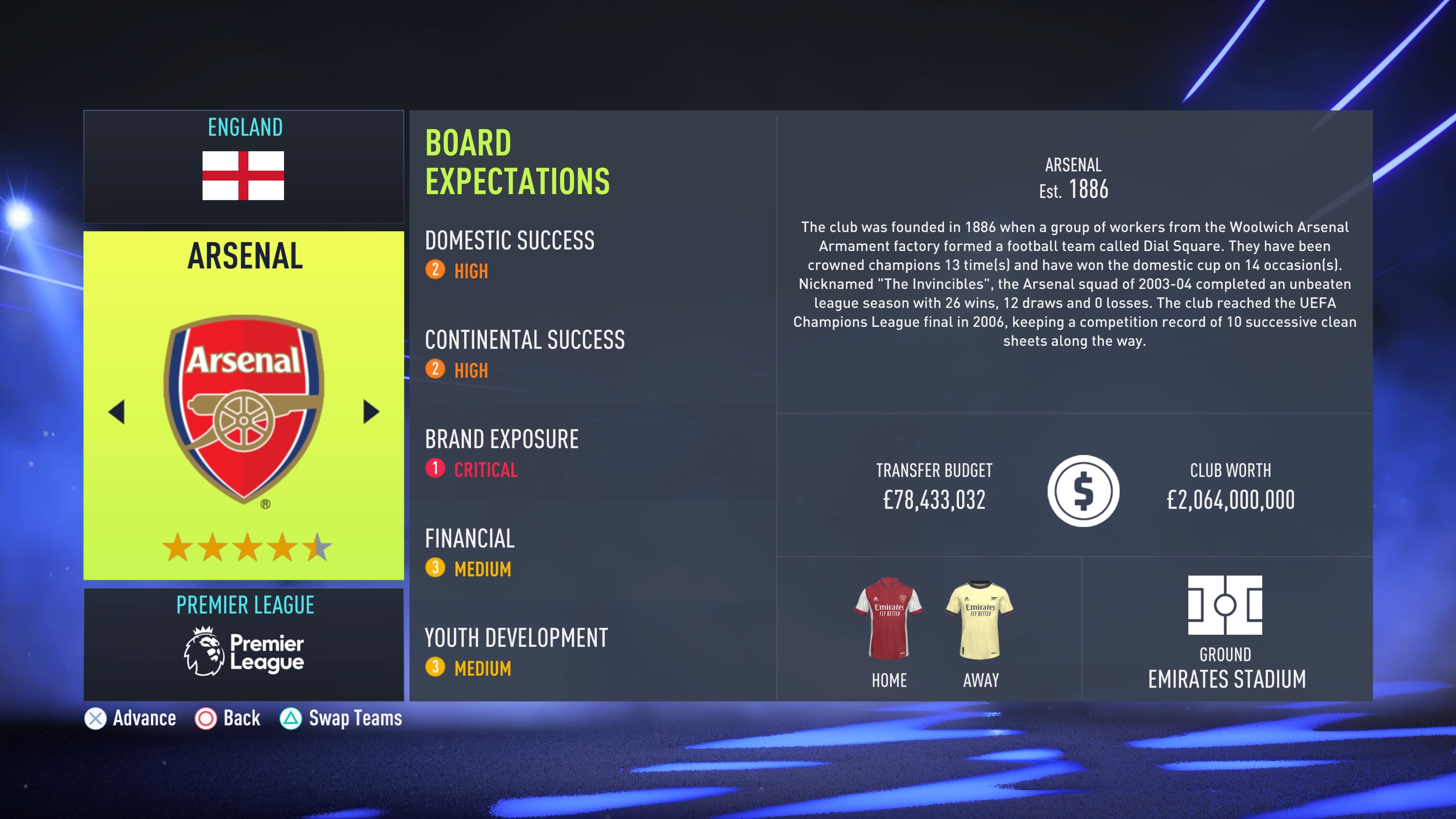 FIFA 22 has not lowered expectations for Barcelona, even if the real world has.

How do you manage their transition in the post-Lionel Messi period?

You get over £100m at the start of Career Mode to help with the rebuild, but if you want to make things tougher, you can turn off transfers for the initial window, meaning you will have to stick with the squad you have at the start.

Bayern Munich have dominated the Bundesliga for the past decade, winning every single league title since 2011-12.

Borussia Dortmund have finished runners-up five times during that period, but have not been able to unseat the Bavarians as Germany's top team.

This could be the last season they have Erling Haaland in real life with the electric forward linked with all of Europe's elite, but in FIFA 22, you may be able to convince him to stay and achieve both domestic and European success thanks to his goals.

Dortmund also have a High focus on Youth Development, shown by their excellent youth prospects including Gio Reyna, Jude Bellingham, Ansgar Knauff and Youssoufa Moukoko. More brilliant teenagers should continue to come through the ranks as you build a long-term career in North-Rhine Westphalia. 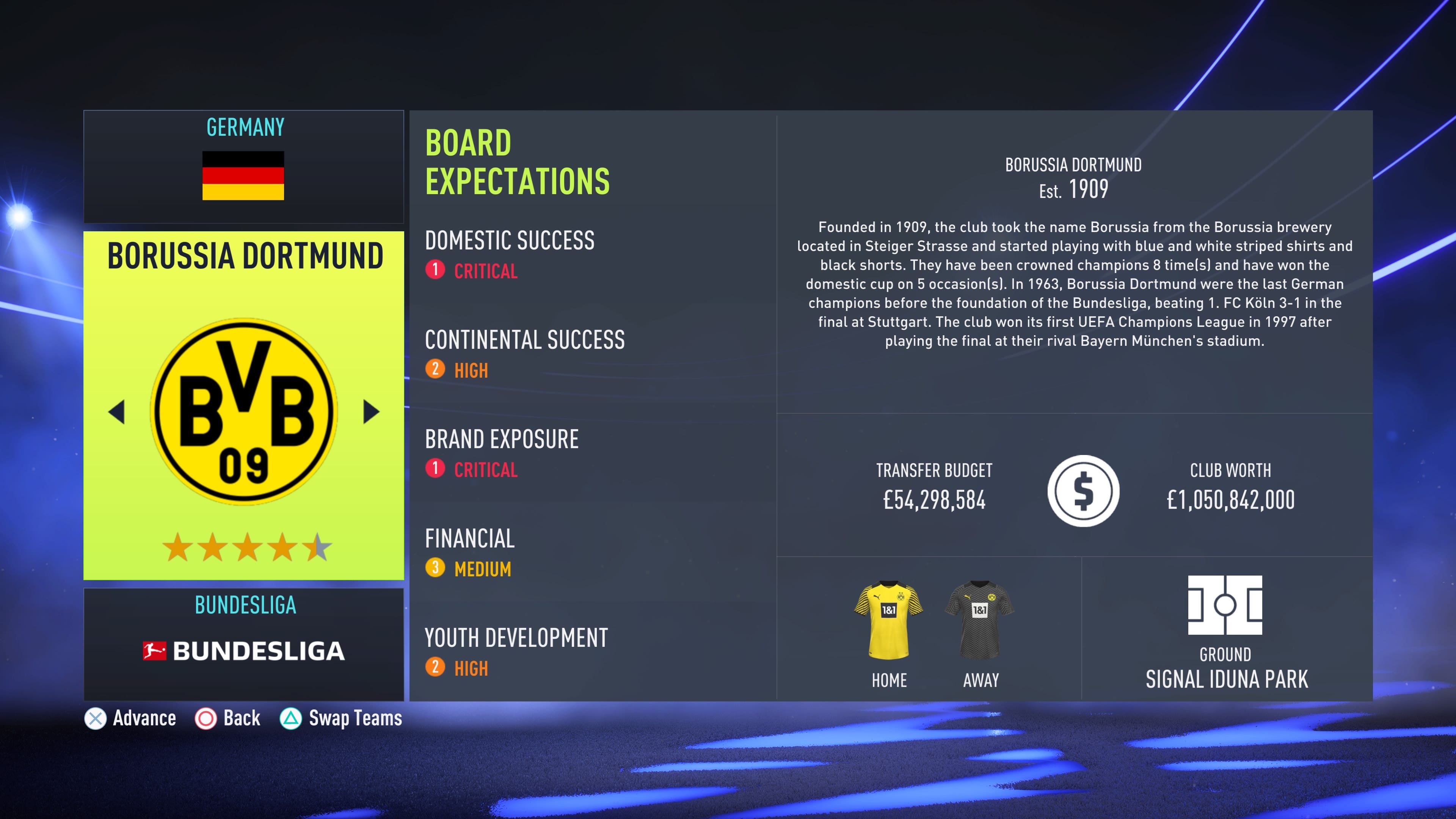 Managing outside of Europe is something a lot of managers never do when playing Career Mode.

Major League Soccer is hugely popular in the United States, but often gets overlooked in FIFA. Inter Miami is an appealing prospect in FIFA 22 as they have a decent transfer budget as well as a few high profile veteran players to build your squad around.

How do you bring a first MLS Cup to David Beckham's franchise? Do you decide to sign more older veteran players with European experience or try to invest in youth and try for long-term success?

Board expectations are Low or Medium across the board, meaning you can take your time honing your strategy without the worry of facing the sack if results do not go your way immediately.

That should make winning Ligue 1 quite easy, but perhaps the fun will be seeing how many goals you can score in a single season and whether you can go undefeated.

PSG have also never won the Champions League, so maybe Lionel Messi can propel them to the title they have long desired.

A starting transfer budget of £137.6 million should also help improve the weaker areas of the team - 82-rated Juan Bernat is the lowest-rated player in their best XI, while they could also do with an extra high-rated player in midfield alongside Marco Verratti and Gini Wijnaldum.

Pumas are one of the most popular teams in FIFA Ultimate Team every year because of their iconic badge and jersey.

However, most people have probably not used them in Career Mode and Liga MX can be an interesting change from the usual league choices.

Pumas have not won a domestic title in 10 years so do not expect immediate success. They have a Critical expectation for Finances, so you will have to ensure you keep wages from spiralling as you try to win the Mexican title and compete for the CONCACAF Champions League. 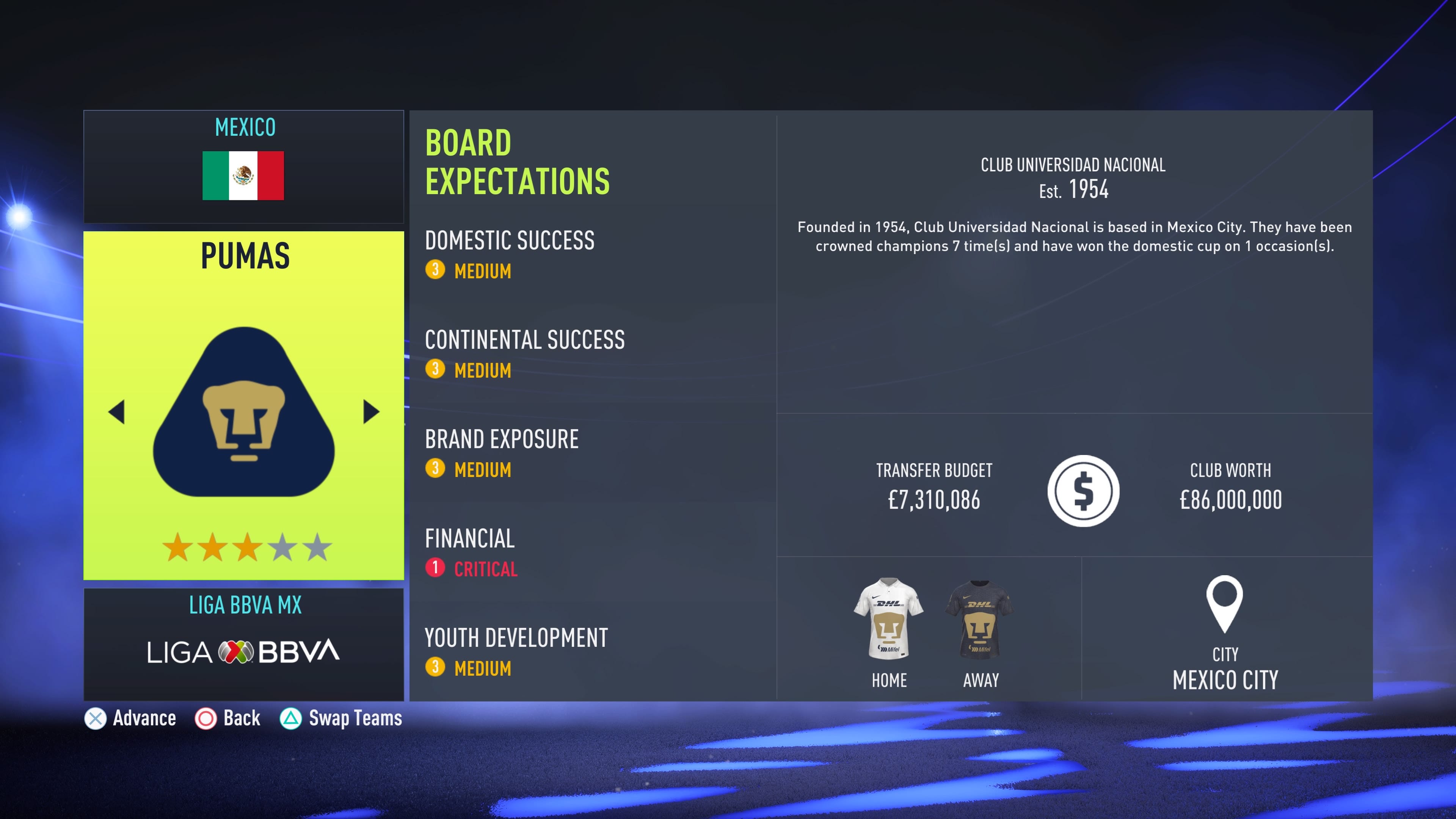 The era of Chinese Super League clubs paying crazy wages and transfer fees for players is over, but it still remains a draw for many international players.

Shanghai Port have had some big name managers at the club, including Sven-Goran Eriksson and Andre Villas-Boas but only one manager, Vitor Pereira has been able to guide them to domestic glory despite their massive budget.

Domestic Success is still Critical for the Red Eagles, while they have never made it further than the AFC Champions League semi-finals.

Sure, managing in the top divisions is fun, but why not take on a real challenge by taking charge of a lower division side?

Sunderland seem the perfect choice as they are six-time England champions and were in the Premier League just five seasons ago.

Now they find themselves in League One and came close to promotion last season but lost in the play-offs.

A mix of veteran players and young talent, they are an interesting prospect and have FIFA legend Aiden McGeady in their squad, allowing you to pull off five-star skills against silver and bronze-level opponents.

Known for its party atmosphere, the island will also have plenty of parties if you can get them promoted to La Liga.

Expectations are Very Low and money is limited so you will probably have to rely on loans and free agent signings to expand your squad.