The movement wants equality for all, but incidents such as the plane banner over Man City-Burnley shows not everyone understands the BLM slogan

Burnley captain Ben Mee was a picture of seething disappointment after his side's 5-0 defeat against Manchester City, but it had nothing to do with the result.

The game itself felt irrelevant as he directed his ire at the people who decided it was a good idea to fly a banner with the words 'White Lives Matter Burnley' over the Etihad Stadium.

A visibly furious Mee told Sky Sports that he was "ashamed and embarrassed" by the stunt, stressing that the message portrayed by the banner was not at all representative of the club or the players.

"It is not what we are about. They have missed what we are trying to achieve," the centre-back said in his rebuke.

"These people need to come into the 21st century and educate themselves. They don't represent what we are about, the club is about, the players are about and the majority of fans are about."

The banner in question appeared shortly after the players had knelt in solidarity with the Black Lives Matter (BLM) movement, as, indeed, other teams had done in previous games since the restart of English football.

Premier League stakeholders had also agreed to print the words 'Black Lives Matter' on the backs of jerseys and individual players have used their platforms to amplify the voices of the BLM movement.

Mee was speaking on behalf of the Burnley team when he admonished those behind the banner, but his expression of sharp disapproval was echoed by many within and outside the football community.

Former England star Gary Lineker lauded Mee's "leadership", while Labour MP David Lammy said that Mee had "given a lesson in how to call out offensive garbage".

Mee condemned the 'White Lives Matter' banner in the strongest possible terms, but the most substantive part of his statement was that, as well as being offensive, it misses the entire point of the BLM campaign. 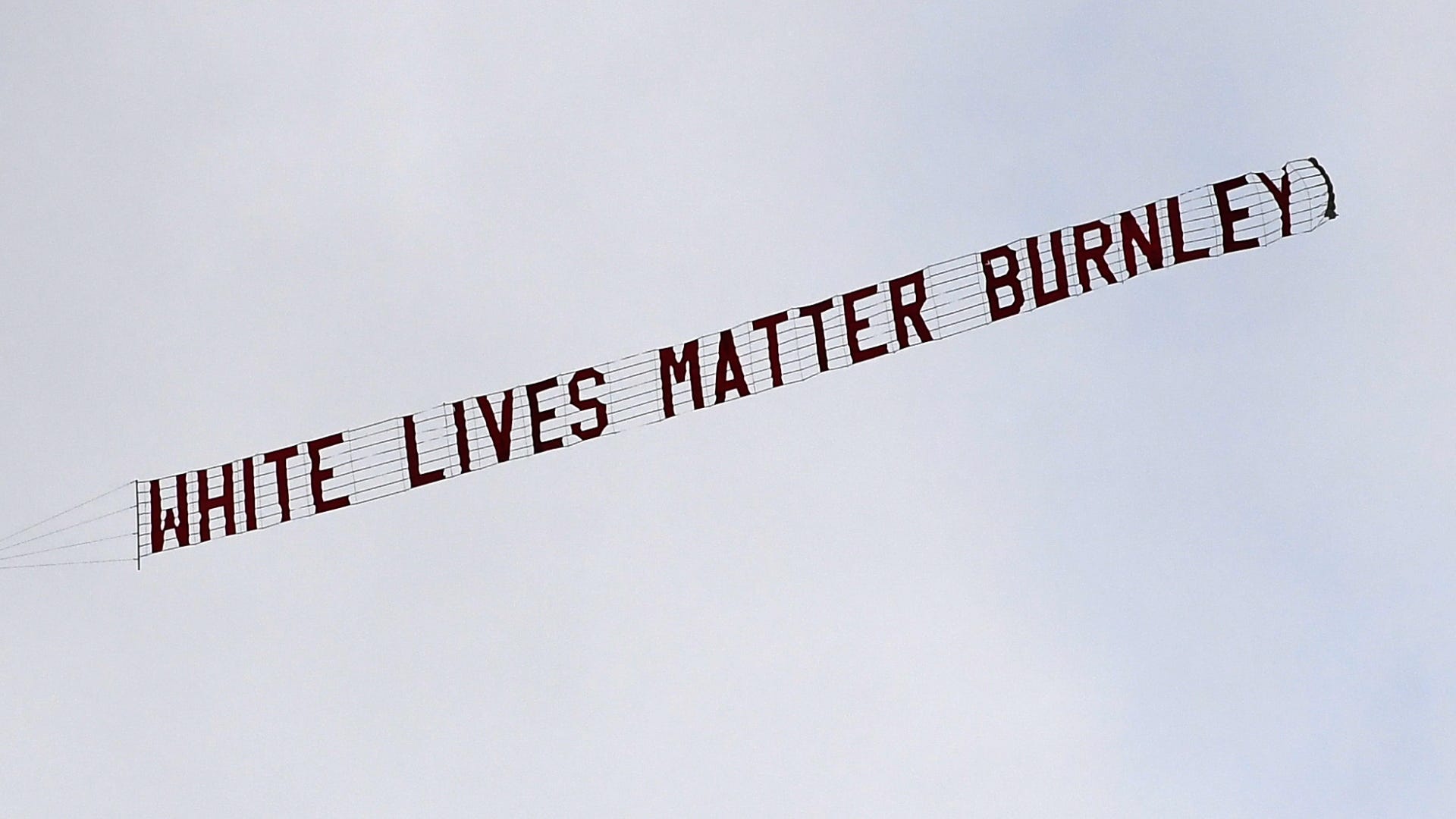 'White Lives Matter' or 'All Lives Matter' reactions miss the point because the Black Lives Matter movement is not about denigrating the worth of other ethnic groups; it is about highlighting a specific problem.

Black Lives Matter is against racism and systemic injustices against the Black community, and it works for equality for everyone.

Reactionary cries that 'White Lives Matter!' or even 'All Lives Matter!' demonstrate a fundamental misunderstanding of what BLM is working for and fighting against.

Such cries also have the effect of diminishing the plight of a community that has suffered violent subjugation in the past and continues to feel the residual ill effects of history, with overt and subtle racism still evident today.

The fact that 'White Lives Matter' has been used as a slogan for white supremacist groups is highly problematic and it creates an absurd false equivalence.

Robbie Earle noted that Mee had understood the issues "through the lens of a black man", telling NBC Sports in an emotional appraisal: "That is change, that is progression. That's people standing with you in the fight and if we can stand together in the fight we've got a chance."

So, when footballers take a knee and wear shirts emblazoned with the slogan, it is an act of solidarity, not of supremacy. It is an expression of a desire to rid the world of racism, in all its forms.

"The knee is still the symbol." ✊#THFC and #WHUFC players take a knee ahead of kick-off to support the #BlackLivesMatter movement. pic.twitter.com/cp8EwsLZ7j

What is the Black Lives Matter about?

Black Lives Matter (or BLM) is a social civil movement that arose in 2013 in response to police brutality against Black people in the United States.

George Zimmerman's acquittal in the case of the fatal shooting of Black teenager Trayvon Martin is considered the catalyst for the Black Lives Matter movement. It began to spread on social media platforms before developing into organised street protests and activism.

Inspired by the civil rights movement, the Black Power movement and Black feminist movement among others, Black Lives Matter is most prominent in the U.S., but has spread across the world.

The BLM website says that the movement is committed "to imagining and creating a world free of anti-Blackness, where every Black person has the social, economic, and political power to thrive".

Why are people protesting?

The Black Lives Matter protests of 2020 are driven primarily by the death of George Floyd, a black man who was killed at the end of May during an arrest by a police officer in Minneapolis, Minnesota.

Video footage circulated online of a handcuffed Floyd lying on the ground with police officer Derek Chauvin kneeling on his neck for approximately nine minutes. Floyd could be heard in the footage saying that he could not breathe.

His death sparked outrage in the U.S. and prompted hundreds of street protests across the country despite public health concerns related to the coronavirus pandemic. Protests subsequently spread to Europe and across the world, with demonstrators clashing with police in many cases, such as the UK, but on a smaller scale.