Alejandro Sabella is an Estudiantes legend.

Before managing Argentina to the final of the 2014 World Cup, Sabella had been begged to stay at Estudiantes after delivering them what remains their only Copa Libertadores triumph of the last 50 years.

He also played in two championship winning teams for the La Plata outfit during the 1980s, and as such he is regarded as an idol at Estadio UNO.

Sabella kneels to no one at Estudiantes. And yet when the legendary coach approached the club's new teenage talent, Dario Sarmiento, for the first time, he felt obliged to bow in the youngster's presence.

"He came and asked me if I was Sarmiento, I said yes and he knelt down," the 17-year-old told ESPN. "He said I was going to be a star, but I need to be calm and live in the present.

"I was nervous, I couldn't believe it. I swear my legs were shaking, I didn't know what to say. I still get nervous when I tell the story and imagine that moment."

Sabella had previously exclaimed "Hallelujah!" when he first saw Sarmiento in action, with the winger's quick feet and confidence on the ball able to make a man who once coached Lionel Messi sit up and take notice.

And while Sabella is just getting to know the youngster, his ability has always been clear to those who have helped nurture his passion for the game.

Born just 30 kilometres outside La Plata in the town of Florencio Varela, Sarmiento was originally picked up by Independiente at the age of six, though it soon became apparent that the distance between his home and the training ground in Avallaneda was too far to regularly travel to and from.

It was at that time that Sarmiento's talent was spotted by neighbour Rodrigo Fuentes, who plied his own footballing trade in the fifth tier of Argentine football. Fuentes was able to convince Estudiantes to offer the youngster a trial, during which he impressed enough to be enrolled into their Pincha academy.

Sarmiento's rise through the youth ranks was meteoric, and at the age of 16 years, six months and six days he was handed his first-team debut by manager and former Barcelona defender Gabriel Milito.

By coming off the bench against Huracan in October 2019 he became the second-youngest player to ever represent the Estudiantes first team, and five days later he showed excellent composure to lay on assist for team-mate Nahuel Estevez to score against Estudiantes de San Luis in the Argentine Cup.

He has since made sporadic appearances for the first team, with his importance to the senior squad highlighted after he was blocked from representing Argentina at last year's Under-17 World Cup due to the limited numbers Milito had available to him.

Off the pitch, Sarmiento has embraced the 'education first' philosophy that Estudiantes ingrain into their academy stars.

Check out the best teenage talents with NxGn :

Club president, former Manchester United and Chelsea midfielder Juan Sebastian Veron, has a belief that "he who does not study, does not play", and Sarmiento is one of a number of young players to have taken that message on board.

"Before I did not give importance to school, but now I realise that it is useful and that in the future it will serve me well," the youngster told the club's official website ahead of his senior debut. After the match a video of him being cheered back into the classroom by his friends appeared online.

On the pitch, Sarmiento favours his left foot, though he has been known to have been deployed on the right-hand side by Milito and encouraged to cut onto his stronger foot. 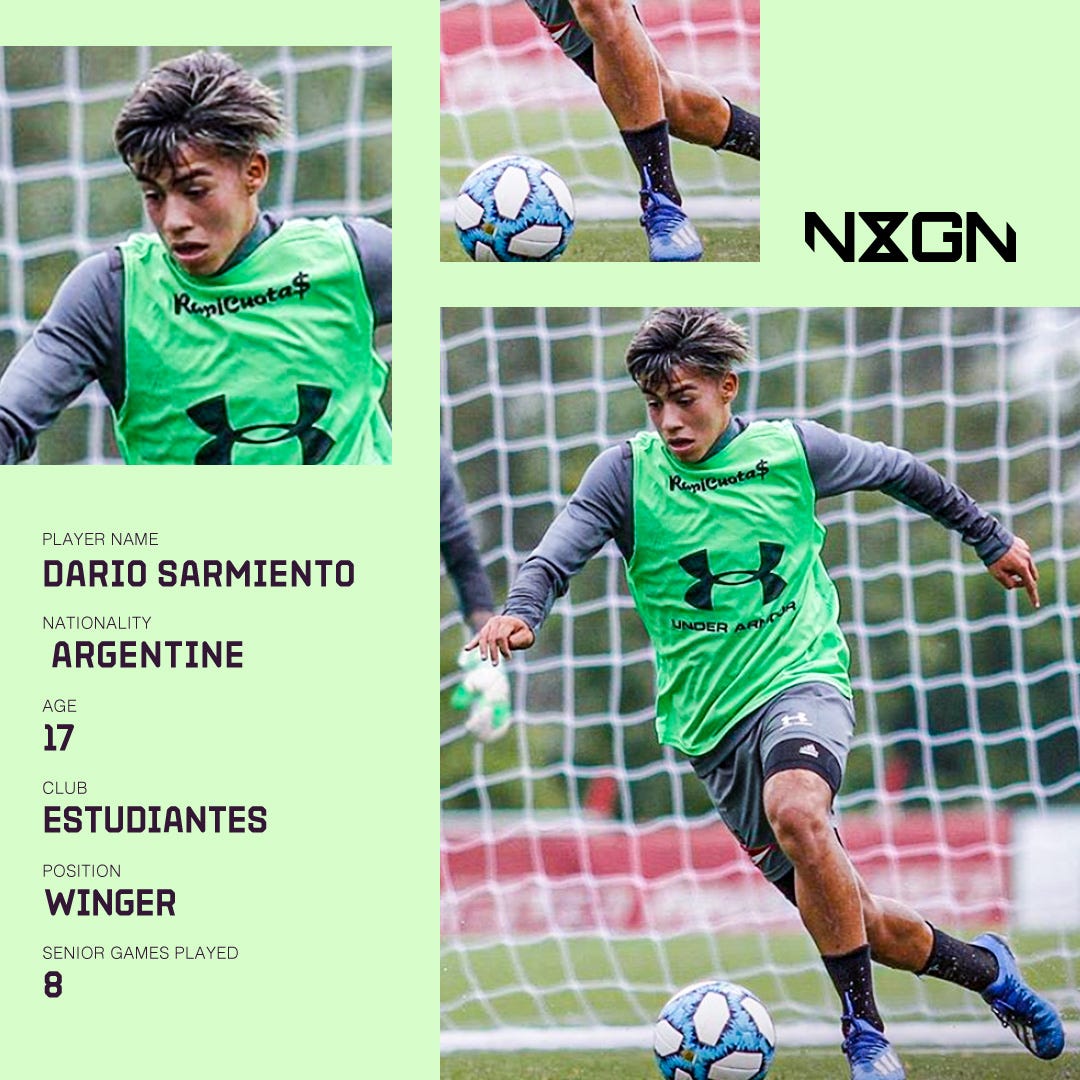 Naturally given his nationality comparisons have been made to Messi, and while Sarmiento has a long way to go to reach those heights, he is certainly not lacking in confidence after pulling of a remarkable double-nutmeg against Deportivo Laferrere in his final outing before Covid-19 brought football to a halt in South America.

It remains to be seen when Sarmiento will next take to the field and where his future lies, but for now Sabella and the rest of the Estudiantes faithful just want to enjoy his development for themselves.

"He is a boy who plays very well, who gives me hope of a good future for him and for all of us who love the club so much," the legendary coach said of the teenager whom he would go onto kneel at the feet of.

Opposition defenders will likely be following that lead over the next decade or two.