The 2020-21 season promises to be a momentous one for Celtic.

After Covid-19 forced the premature ending of the 2019-20 campaign, the Bhoys were crowned Scottish champions for the ninth successive season.

No team has ever won 10 Scottish top flight titles in a row, and despite Rangers having steadily improved under the management of Steven Gerrard, Neil Lennon and his team now find themselves on the brink of history as they prepare to face Hamilton Academical in their season opener on Sunday.

It could also be a momentous season, though, at a far more micro-level.

For almost four years, the name Karamoko Dembele has been on the lips of all who follow Celtic. Having made headlines around the world after making his debut for the club's Under-20s side at the age of 13, the teenager is now on the cusp of becoming a first-team regular in Glasgow.

Now 17, the young forward has been involved throughout pre-season for Lennon's side, and scored his first goal for the first team in their most recent friendly win over Hibernian.

It is expected that he will be fully-fledged member of the senior squad for the upcoming campaign, with many Parkhead regulars keen to see how the exceptionally gifted teenager copes with the rigours of men's football.

Dembele was born in London to Ivorian parents, but moved to Glasgow before his second birthday.

He and older brother Siriki - who now plays for Peterborough United in England's third tier - grew up with footballs at their feet, with Karamoko joining Park Villa Boys Club at the age of five.

“I’m convinced when he was born he came out with a ball and nutmegged the midwife!” David Feeney, one of his coaches at Park Villa, told The Scottish Sun in 2016.

"From the minute I saw him, he was unbelievable. He was small but had no fear. It all came so easy to him.

“He’d be in a group with kids who couldn’t control the ball without using their hands. At the same time, Karamoko would rattle off 100 keepy-uppies."

Good time away in Sheffield with the lads⚽️🔥, and also good to get player of the tournament ⚽️, boys were unreal 🔥

News of Dembele's prodigious talent soon got around, with some games drawing larger than normal crowds for boys football just so fans and scouts could catch a glimpse of the precocious youngster.

"He scored so many goals for us I had to put him at left-back," Peter Paton, another of Dembele's coaches at Park Villa, told the Daily Mail. "The wee toe-rag would still take the whole team on and score more goals.

"A couple of times, just for a joke, I would swap him with my son, Peter, and put Kaddy in goal!"

Feeney too tells tales of Dembele's love of leaving opposition defenders for dead, saying: "We just tried to teach him good habits - when to dribble, when not to. We also had to tell him to stop nutmegging people all the time because he was taking the p*ss a bit!"

Despite growing up much closer to Rangers' Ibrox stadium than to Celtic Park, it was the Bhoys who showed most interest in signing Dembele, and he enrolled into their academy system at the age of 10.

His time with the club thus far has been an undoubted success. In March 2016 he was named Player of the Tournament at the St Kevin’s Boys Academy Cup in Dublin as Celtic's U13s took on the likes of Barcelona and Lyon.

Check out the best teenage talents with NxGn :

In August of the same year he was again named Player of the Tournament at the Bassevelde Cup in Belgium, with Celtic beating a highly-rated Borussia Dortmund side in the final.

That all provided the build-up to his true breakout moment as, with a number of regulars missing on international duty, he stepped off the bench for Celtic's U20s to make his debut at that level despite being just 13.

Despite his appearance being nothing more than a short cameo, the amazing disparity between his own age and those who he was playing against, coupled with his impressive YouTube showreels, meant that the world's media were soon all reporting on the game's next wonderkid.

He remained with Celtic, however, and signed his first professional contract with the club as a 15-year-old in December 2018. That deal runs until 2021, with the likes of Arsenal, Juventus, Paris Saint-Germain and Dortmund having been linked with moves for him since.

"Getting attention at a young age has been hard," Dembele said upon signing his contract. "You need to be strong mentally, you need to stay grounded, and you just need to get on with everything that you do on a daily basis."

Dembele has seen his profile outside of Scotland drop somewhat since that headline-grabbing youth team debut, but he has continued to make excellent progress.

He made his first-team debut as a half-time substitute on the final day of the 2018-19 campaign against Hearts before being named on the bench again a week later for the Scottish Cup final.

Last season he made just two appearances, though his introduction off the bench against Cluj in the Europa League was enough for him to become the youngest player to ever represent Celtic in European competition.

At international level, too, he has impressed, though there remains a tug-of-war over whether he will go onto represent Scotland or the country of his birth, England.

He has represented both countries at U17 level, though it seems he has, for now, chosen England.

Great to be back with England! Wasn’t the result we wanted but all focus on Spain🦁🦁🦁#ENG17

That is seen as a big coup for the Three Lions, with Dembele part of a group of a highly-talented group of players born in 2003 that includes new Borussia Dortmund signing Jude Bellingham, Bayern Munich's youngest-ever Bundesliga debutant Jamal Musiala and former Barcelona trainee Louie Barry, who is now at Aston Villa, among others.

The fight over Dembele's international future is likely to rumble on, but for now all his concentration is on breaking into the Celtic first team over the course of the next few months.

Despite now being firmly a part of the senior squad, becoming a regular in the team is another matter all together, particularly given how important winning a 10th title in a row is to the club and its fans alike.

“They have talked about Dembele for years now,” Celtic legend Frank McAvennie told Football Insider in a recent interview. “Lenny [Lennon] likes him and gave him a couple of games last year. He has the talent. 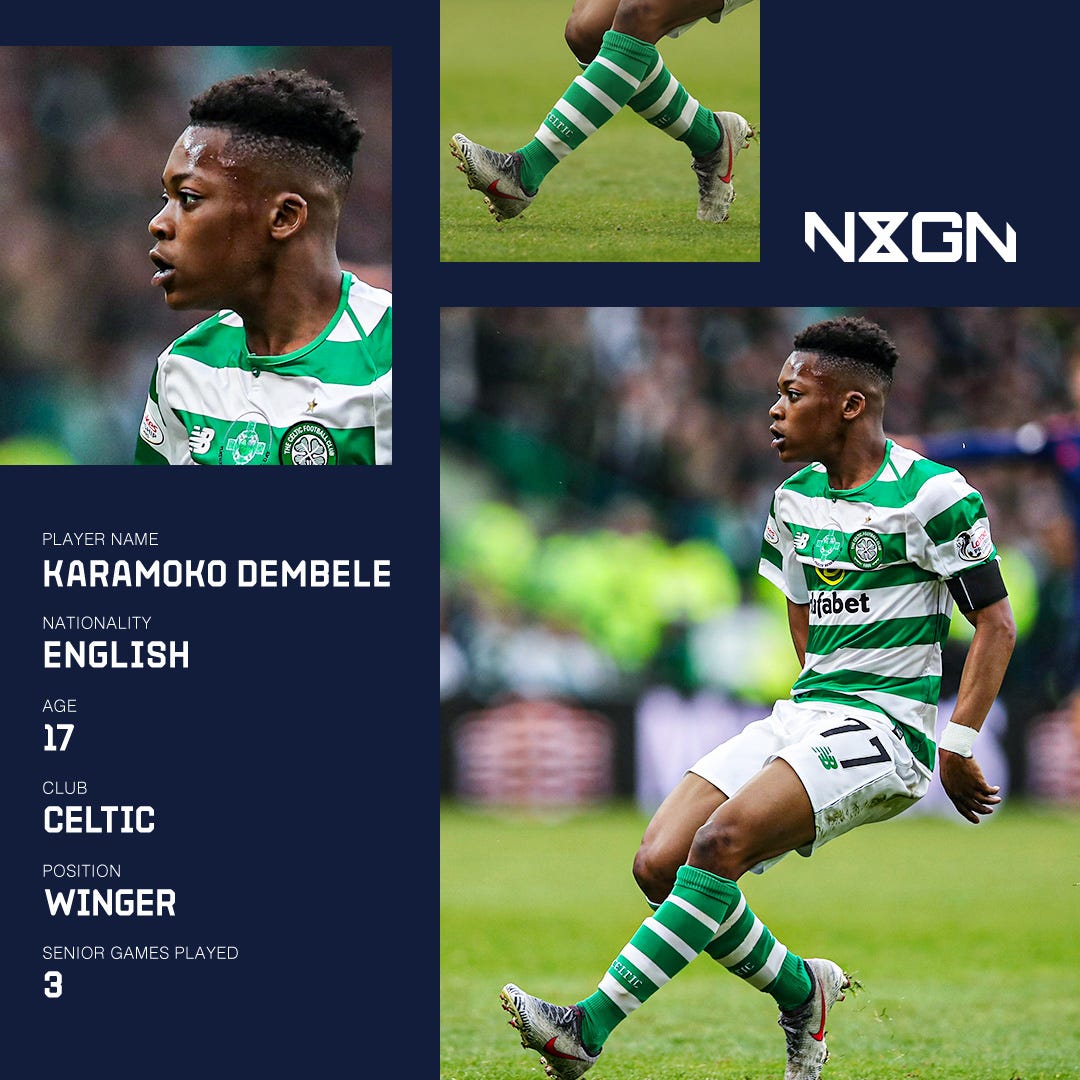 “He is very exciting and when he gets the ball he gets the fans off their seat. A player that is not going to put his foot in, but he gets kicked all over the place.

“But you need somebody that can go in and stay in the team. Lenny needs to build a stable team this year, rather than chopping and changing.

“Dembele will be a bit-part player this season because Lenny has a big squad. This year is too important to blood youngsters."

Some reports have suggested Dembele could even be sent on loan this season to earn more experience while those links to the continent's very best teams will always be there, but for now he remains on the fringes at Celtic.

Whether it is this season or next, his time will come in the not too distant future. Only then will we truly know if Dembele's ascension has been worth the wait.